On the graphics side of the equation, the information comes in two loaded barrels. For the media capabilities, including information regarding Multi Plane Overlay, Intel’s Quick Sync and HEVC decode, head on over to Ganesh’s great one page summary. Some of that information might be reproduced on this page to help explain some of the more esoteric aspects of the design. 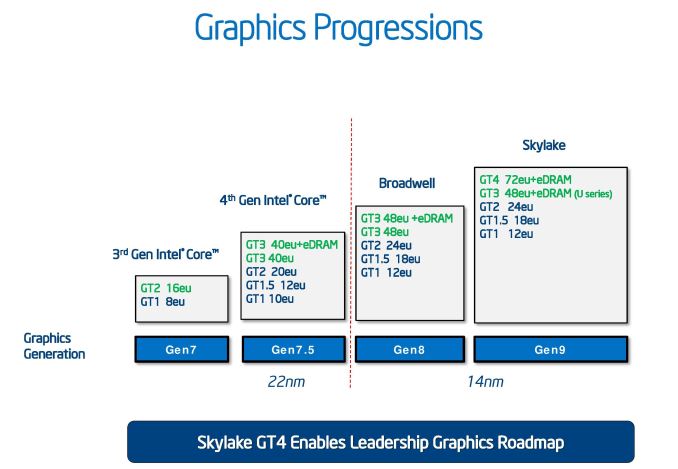 First let us look at how Intel’s integrated graphics has progressed over the generations. It has been no secret that the drive to integrated graphics has eaten almost all of the low end graphics market save one or two cards for extra monitor outputs. For Intel, this means slowly substituting a larger portion of the die to more execution units, as well as upgrading how those units process data.  From the graphics above, and as we’ve noted before, Gen9 takes Gen8’s concept but with an added element at the top – GT4, which incorporates a new slice of EUs. As mentioned on the previous page, the eDRAM will come in 64 MB arrangements for GT3e (Iris), and 128 MB for GT4e (Iris Pro). 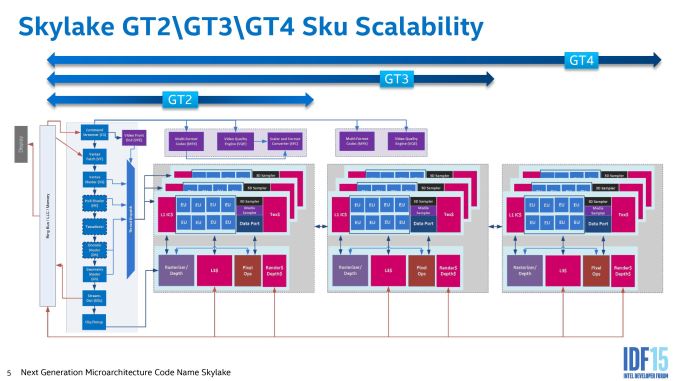 Intel’s graphics topology consists of an ‘unslice’ (or slice common) that deals solely with command streaming, vertex fetching, tessellation, domain shading, geometry shaders, and a thread dispatcher. This is followed up by either one, two or three slices, where each slice holds three sub-slices of 8 EUs, separate L1/L2/L3 caches and rasterizers, texture caches and media samplers. With one slice, a GT2 configuration of 24 EUs, we get the video quality engine (VQE), scalar and format converter (SFC) and a multi format codec engine (MFX). Moving to GT3 adds in another MFX and VQE.

In each of the SKU lists, Intel has both the name of the graphics used as well as the base/turbo frequencies of the graphics. To synchronize both the name and the execution unit arrangement, we have the table above. At this point we have no confirmation of any parts having the GT1.5 arrangement, nor are we going to see any 23/24 EU combinations for Pentium/Celeron models similar to what we saw in Haswell.  For the 12 EU arrangements, this means that these have a single slice of 24 EUs, but half of them are disabled.  We questioned Intel on this back with Haswell, regarding of the EU cuts are split to 4/4/4 from the 8/8/8 sub-slice arrangement, and the answer we got back was interesting – there is no set pattern for 12 EU arrangements. It could be 4/4/4, or 3/4/5, or 3/3/6, or any other combination, as long as the performance is in line with what is expected and the EU count per sub-slice cannot be user probed. Despite the fact that a 3/3/6 arrangement might have L2 cache pressure in some circumstances, Intel feels that at this level of performance they can guarantee that the processors they ship will be consistent. It’s an interesting application. 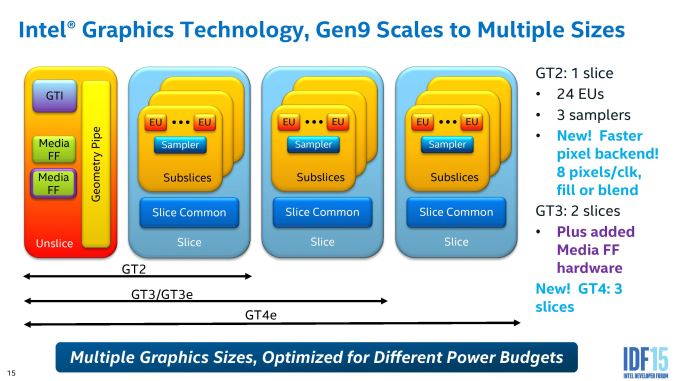 Part of Intel’s strategy with the graphics is to separate all of these out as much as possible to different frequency planes and power gating, allowing parts of the silicon to only be powered when needed, or to offer more efficiency for regular use cases such as watching video. 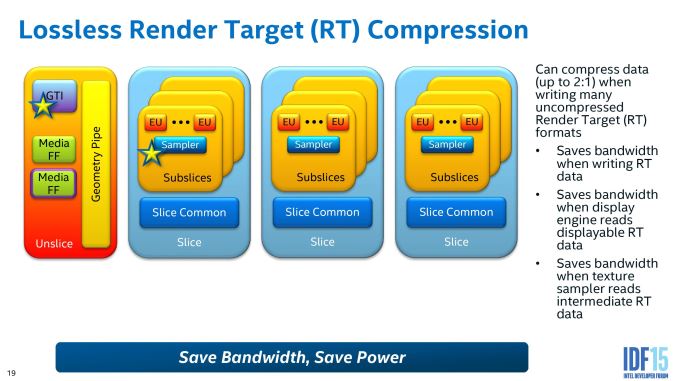 As we noted at Skylake-K launch, Gen 9 graphics also features lossless image compression allowing for fewer data transfers across the graphics subsystem. This saves both power and bandwidth, and an upgrade to the display controller allows the image format to be read in a compressed format so as not to uncompress it before it gets sent out to the display. 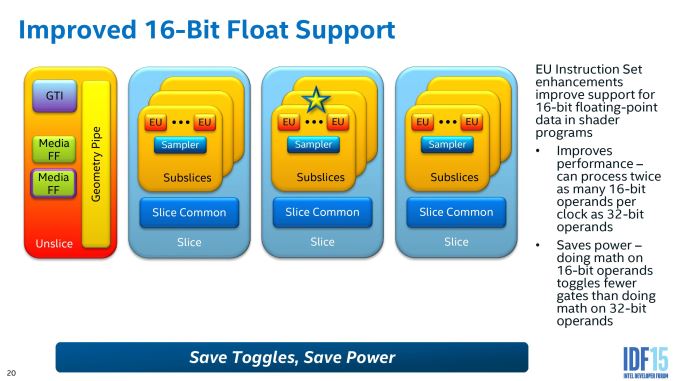 16-bit support has been a key element to discrete graphics in 2014 and 2015, affording faster processing when less accuracy is required by dumping extra significant digits. This is doubly beneficial, resulting in less power consumption for the same amount of work – Intel is exposing this to a greater degree in Gen9 for its shaders. 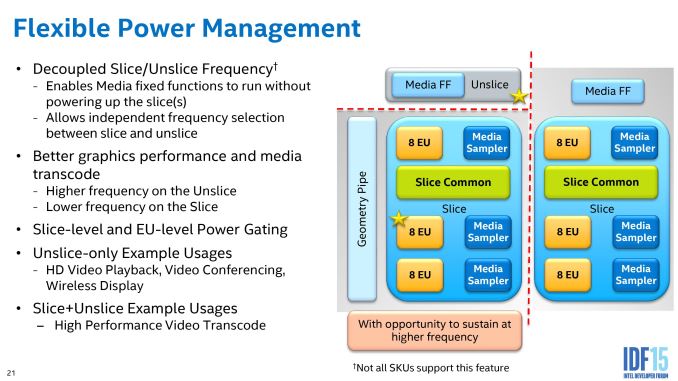 Intel’s big push on power for low-power Skylake is part of the reason why we did not see much difference in our Skylake-K review. Being able to shut off more parts of the processor that are not in use allows the available power budget to be applied to those that need it, hence why both power gating and frequency domains on the silicon, while they take up die area to implement, contribute to power saving overall or allow work to complete quicker in a race to sleep environment.

One of the features I’m most particularly interested in is Multiplane Overlay. In a typical environment, a user might be looking at content that is stretched, rotated or distorted in some way. In order to perform this transformation, the image information is loaded into memory, siphoned off to the graphics to perform the mathematics, moved back into memory and then fired off to the display controller. This in and out of the DRAM costs power and battery life, so an attempt to mitigate this with fixed function hardware is ultimately beneficial. This is what MPO does. 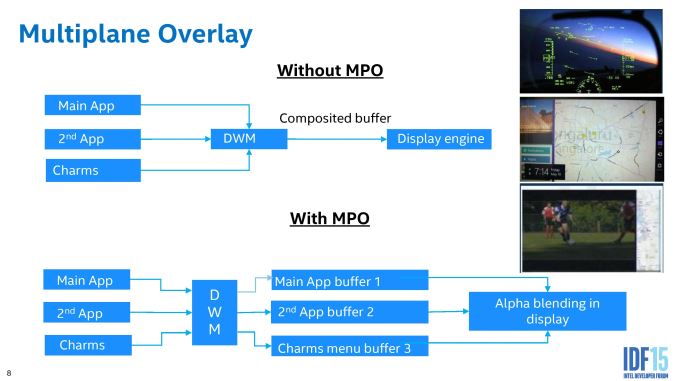 This slides shows a good way on how MPO works. The current implementation splits the screen into three ‘planes’ (app, background, cursor, or any combination therein) which are fired off to the desktop window manager (DWM). In a standard method, these layers are worked on separately before being composited and sent off to the display (the top model). With MPO, each of the planes fills a buffer in fixed function hardware on the display controller, without touching the GPU and requiring it to be put into a high power mode. MPO also allows for data in NV12 format to be processed on the fly as well, rather than requiring it all to be RGB before it is recombined into the final image (which again, saves power and bandwidth).

There are some limitations to this method. Currently, only three planes are supported, and there is no z-hierarchy meaning that if an app is obscured by another but still requires work, and then it does not get discarded as it should. For non-OS work that takes full-screen environments, it also requires the necessary hooks to the FF hardware otherwise it will assume it all as one plane and go back through the GPU. Intel is planning to improve this feature over time, as we might expect. 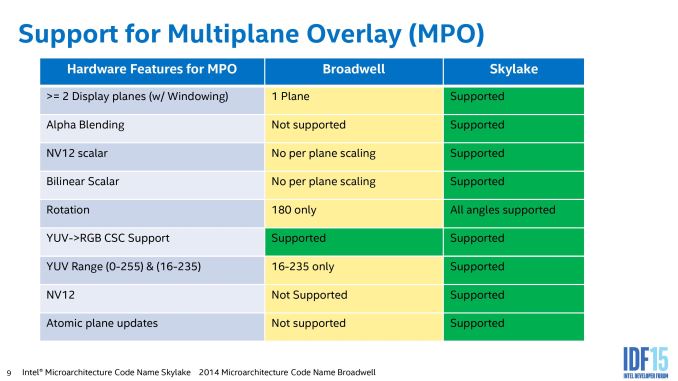 Intel’s data showed a 17% power saving increase overall while watching a 1080p24 video on a 1440p panel. Given the march to higher resolution displays and the lack of high resolution content, I can imagine this being an important player in future content consumption or multitasking. 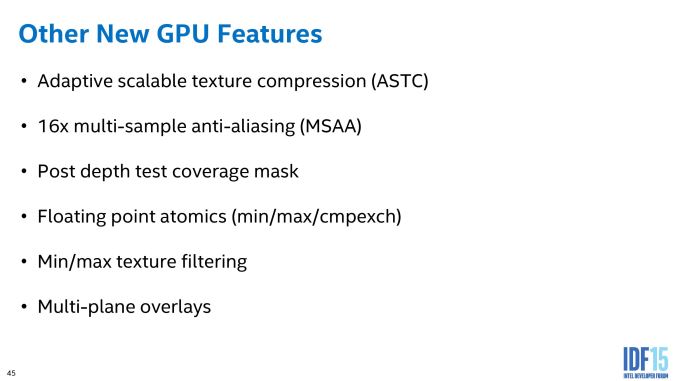 There are a number of other media specific functions also new to Skylake, especially evolving around RAW processing in the fixed function units of the video quality engines to save power, other memory compression techniques and the encode/decode of specific formats such as HEVC and VP9. For this information, I suggest heading over to read Ganesh’s piece on Intel's Skylake GPU - Analyzing the Media Capabilities.