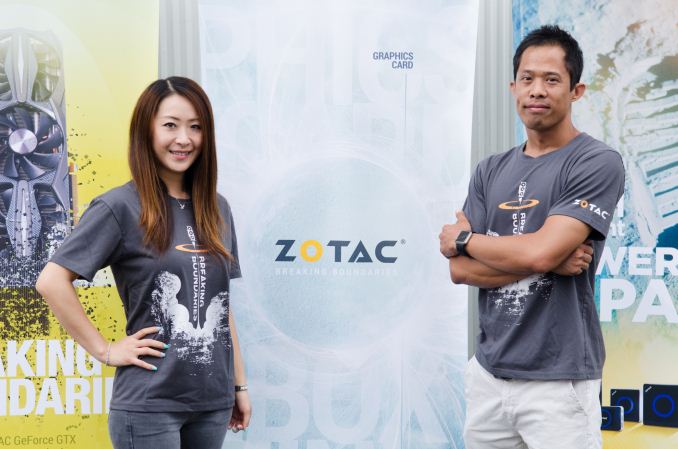 IC: How long have you been at Zotac?

CC: In this position, almost one year since last July. I joined Zotac last May as a regional marketing manager.

IC: When we approached Zotac with our Build-A-Rig initiative, what were your immediate thoughts?

CC: I thought it sounded like a really good opportunity to participate in the campaign, increase our brand awareness and promote our new graphics cards. It’s always great to interact with the community, especially with giveaways and giving prizes to the audience.

IC: How do you feel about the competitive aspect of the project, the fact that we are pitting you against another company to build a PC?

CC: It’s a pretty interesting idea. As you mentioned in the article posted already, you didn’t intend to choose two primary competitors and in fact we are really close with Corsair anyway. We join with them in a number of social media campaigns, contests, and even at events such as the upcoming QuakeCon we will share a booth as well. So in terms of the competition, this Build-A-Rig project, the fact that we are not direct competitors is a good thing.

BL: For me, it’s a bit of fun to show what kind of focus we put into the build of a computer.  This means whether it is based on design, minimalism, or performance.

IC: We gave you a budget of $1500 to build a single-monitor focused gaming system. How do you think that $1500 value sits with the current market?

BL: I think it’s a decent amount to get great performance out of a computer no matter what components you choose. Definitely you won’t be able to build the fastest computer out of the components available today, but it’s a budget that will allow you to be futureproof for the next couple of years.

IC: So you’re saying we gave you too much money?

BL: More like some breathing room to be more dynamic with our options.

IC: What aspects do you think others might focus on for the budget?

BL: That really depends - if they want to focus on a gaming PC then they’ll want to focus mostly on the graphics card and on the CPU. But if you’re building a type of workstation then that depends more on the motherboard as well as the CPU and memory. Also whether you chose air cooling or liquid cooling, or a full tower versus a mini-ITX or microATX.

IC: Looking at the overview for the “Hey Good Lookin’” build would you say you went for aesthetics over performance?

BL: Not necessarily – our focus was to build something very clean and minimal but at the same time still have the power to perform and have the speed to get things done quickly so I don’t think there was any sacrifice in performance. Sure enough there could be room to include better components but we felt this was a good balance between a very clean minimal system but at the same time give you that speed and power you need to get things done quickly and play games available today.

IC: What sort of person would build the “Hey Good Lookin’”?

BL: This system was focused on gaming, rather than say for those who focus on overclocking but want to show off their build. (Buu here is referring to the non-overclocked processor which saves some money to go on aesthetics.)

CC: I think for me and Buu we prefer to build clean looking systems. Whenever we go to gaming events or conventions, the system we build is designed to look good. As a graphics card company primarily, the card has to be the highlight and focus so while the other parts are there for performance, the GPU is still the highlight.

IC: Looking at the gaming market, eSports is still the biggest driver for gaming and $1500 is overkill for this market. When you compare these systems against those that focus on triple-A titles such as Far Cry 4 and Witcher 3, how does Zotac align its marketing and product strategy to these areas?

BL: We tackle these markets based on product differentiation. So our graphics card line is the GTX 960, 970, 980 and 980 Ti, and in-between we have different levels for each. There’s the standard model or each, then the AMP line for those who need a bit more power. Our aim is to provide gamers, no matter their budget, a wide selection of GPUs to choose from and they are not limited to one level of power for their budget range. The GTX 960 is more than capable of driving eSports games, for example.

CC: I think the majority of the major game titles should be very capable on our GTX 960. But there are still some demands in the market for higher performance. For example, our GTX 980 Ti is selling really well.

CC: At this moment, out of our 900-series range, it is actually the GTX 970. This is one of the reasons why we chose it as part of our $1500 build. The card we chose is actually from round of GTX 970 refreshes, more budget concerned, combining value and performance compared to other GTX 970s available and is also one of the best-selling.

IC: Do you see an element of brand loyalty with Zotac customers, such as those that will invest over multiple builds in the Zotac brand?

BL: There definitely is. We always focus on build quality and we try to build one of the fastest factory overclocked cards out of the box for each model. Customers see this, and lately we’ve introduced more new innovations as well. This includes our line of GPU backplates, including a wrap-around backplate that unifies the look of the graphics card altogether. With the 980 Ti, we introduced backplates where we have some type of graphic on it - with the Arctic Storm you can definitely see that there. There’s been a lot of hype about it, and we’ve got very positive feedback on our design, the quality, the speeds and the pricing. We've also paid attention to feedback and improved as well.

CC: You’ve probably noticed that a year ago Zotac made a number of changes in GPU design. This includes the ID, the color and also adding on more special features, trying to build up the brand name in higher performance.

IC: Are you gamers?

BL: I used to be, but recently not so much. I still integrate myself deep into the technologies being developed and how components work together, but recent developments with family (such as children) mean I have less time to game than before.

CC: I’m not that good at gaming! Every time I play I seem to do badly, but I have had some success with Street Fighter like titles! I find they are good to release stress and pressure.

BL: We encourage everyone to at least try the latest games – we get copies of popular titles for internal testing, so our team invites us over to test some of the more interesting elements for our own benchmarking and such.

CC: We actually run a big gaming community, the Zotac Cup, which is linked direct from our website. Over the past eight years we now have 70,000 members from around the world. We previously focused purely on the EMEA region, but expanded to NA and expanding to APAC with an APAC cup, making it more of a global interest and gaming community activity.

IC: What sort of PCs are you running personally?

BL: At home I run a micro-ATX system with 8GB of memory, a 256GB SSD and three regular sized hard-drives totaling 9TB of space. I’m currently running it without a graphics card, as I primarily use it more so for day-to-day activities, video playback and storage.

CC: Since being promoted to a global position, I end up travelling a lot, hence why Buu and I were coordinating our build while I was in HK and Buu was in the US. So I mostly work out of a laptop, especially when I travel to Europe and China which ends up being very often right now.

BL: It’s interesting because I end up mostly using my tablet or iPhone now, especially for media consumption and email. At work, I have a mini-ITX system with a GTX 750 Ti, but I also have an open-air testing system next to me for benchmarking with 16GB of memory and a Core i5 on liquid cooling.

IC: Going back to the Hey Good Lookin’ build, if you were to have half the budget again ($750) for upgrades in the next twelve months, what would you suggest?

CC: There’s an option to upgrade the GTX 970 to whatever new GPU is coming out in that timeframe, particularly if they are more powerful and/or lower cost. There’s also our GTX 980 Ti Extreme, and due to a factory overclock it beats the Titan X.

BL: That would definitely help the system to be future proof on gaming. We’re all interested in what Skylake is going to bring, so that might have some interest in a new motherboard, a new CPU, and most likely new memory as well. We could sell the old ones and see what is left for a GPU upgrade.

IC: Zotac also sells a lot of mini-PCs and is a focus of the company. With Steam boxes still being talked about, what are Zotac’s Steam Box ideas and could we get a good gaming box for $1500?

BL: We have two planned – we have the SN970 which we debuted back in early February at GDC. So that system for around $999 you will have plenty of budget to spare. It will come with a Skylake processor, 8GB of memory, a 64/128GB SSD, a 1TB 2.5-inch drive, and bundled with Steam OS as well as a Steam controller. The graphics power will come from a GTX 970M mobile graphics processor, with more than enough power to play current titles.

We will be introducing another model which we debuted at CES and demoed at Computex which is the EN970. It looks very similar to the SN970 but is available in matte black and as a Broadwell i5 CPU but the rest of the specification is unchanged. It will be available as a barebones or as a PLUS version with 8GB of memory and an SSD. Pricing is unknown at this time, but it will be less than a thousand US dollars.

CC: Because of our E series, we will continue with our strategy of a barebones system being available for users to put their own memory and storage in them. With the Steam machine project, we are trying to finalize the configurations because the launch day is in November and we are considering doing some pre-orders before then. We are waiting for Skylake to be released in order to set the final configurations.

IC: So if we did this $1500 budget contest later this year, we should consider a Zotac Steam Box?

BL: With the Steam Box pricing, add in some external storage and it will offer enough budget to also get a mechanical keyboard, a nice mouse and a good headset as well, making it an option for gamers.