Inside VIA: Beneath the Hull of WenChi's Ship

Despite acquisitions of audio and graphics companies as well as starting their own motherboard line, VIA is still primarily a chipset manufacturer. On the Computex 2002 show floor there were almost an equal number of VIA based products to Intel products; among the most popular were KT400 and K8HTA but those two chipsets are just a small portion of VIA's upcoming chipset plans.

On the first day of Computex we brought you pictures of Intel's Granite Bay chipset, a high-end desktop/workstation chipset for the Pentium 4 with dual channel DDR SDRAM. Provided that Granite Bay ships at the end of this year, VIA is expecting to have a lead of a couple of months with their P4X600 chipset - a dual channel DDR solution for the Pentium 4. The P4X600 has deviated from its original production schedule by approximately one month; while tapeout was originally scheduled to be in time for Computex, it ended up getting pushed back until July. In comparison, Granite Bay is currently running quite reliably right now. The difference between the two chipsets is that Intel has had a dual channel DDR memory controller ready and tested ever since their E7500 chipset, while P4X600 will be VIA's first attempt.

Despite the lagging schedule of P4X600, VIA still expects to beat Intel to market with the first dual channel DDR desktop Pentium 4 solution. The reason VIA is able to accomplish this is because Intel seems to be holding off on Granite Bay until they get an idea of what AMD will be doing later this fall. Most of the motherboard manufacturers we've talked to are saying that Intel is waiting on Hammer before deciding when to push Granite Bay. There's also the issue of validating the chipset with DDR333 SDRAM which will be supported on the upcoming 845GE and 845PE chipsets. VIA is shooting for a Q3-Q4 P4X600 launch.

Although P4X600 is on the way, you'll see the release of the P4X400 chipset fairly soon. The reason behind the P4X400 is mostly a marketing one as VIA wants to get away from naming chipsets based on FSB or memory bus speeds, they simply change too quickly. Instead you will see a chipset family name such as P4X400 with individual chipsets being named P4X415, P4X415G, etc… (very Intel-like). The P4X400 will be very close to the P4X333 in terms of design and performance; obviously support for DDR400 SDRAM will be included.

VIA was demonstrating DDR400 running on a P4X400 platform at their office (below). Getting P4X400 to run at DDR400 wasn't much of a challenge for VIA considering that they were running KT400 on the show floor with a 200MHz DDR memory clock. With DDR400 a single 64-bit memory channel can provide enough memory bandwidth for the 400MHz FSB Pentium 4 processors. In the event that DDR400 does not take off, VIA will be transitioning their Pentium 4 line to dual channel DDR (much like Intel). 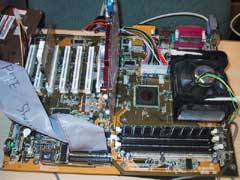 Next on the roadmap for VIA is P4X800 which will offer DDR-II support. Details are sketchy at best but VIA's memory roadmap is aligned with what we're seeing from other chipset manufacturers: DDR-II is set to take over from DDR in mid to late 2003 and on into 2004. It's much too early to talk about the adoption rate of DDR-II but we are seeing positive response to the technology and just like with the original DDR spec, the graphics card companies are already working very closely with the memory manufacturers so they can use the technology as soon as possible after ratification by JEDEC.

In terms of features supported by these chipsets, you'll run into things like AGP 8X, USB 2.0, Serial ATA and Wireless (eventually). Serial ATA support will be first introduced by VIA with a discrete controller later this year. Just like VIA's USB 2.0 strategy, after the controller is proven in its discreet form VIA will integrate the silicon with their South Bridge core.

By far the biggest limitation VIA faces with their Pentium 4 line of chipsets isn't their feature list or their roadmap, it's tier 1 motherboard support. Because of the pending legal action against VIA companies like ASUS, Gigabyte and MSI won't touch any of their Pentium 4 solutions. Without support from the larger motherboard manufacturers VIA's IA-32 market share is being eroded by SiS' Pentium 4 chipsets.