The power consumption at the wall was measured with a 1080p display being driven through one fo the mini-DP porst. In the graphs below, we compare the idle and load power of the Logic Supply ML100G-30 with other low power PCs evaluated before. For load power consumption, we ran Furmark 1.12.0 and Prime95 v27.9 together. Despite the lack of active cooling, the idle power consumption is a bit too high for our liking (considering that we are operating in single-channel memory mode). This may be due to a number of factors - idle power of the Transcend SSD not being particularly attractive and/or power supply inefficiencies and/or vPro as a platform itself may show some increase in idle power consumption. We didn't explore this in enough detail to root cause the behavior. 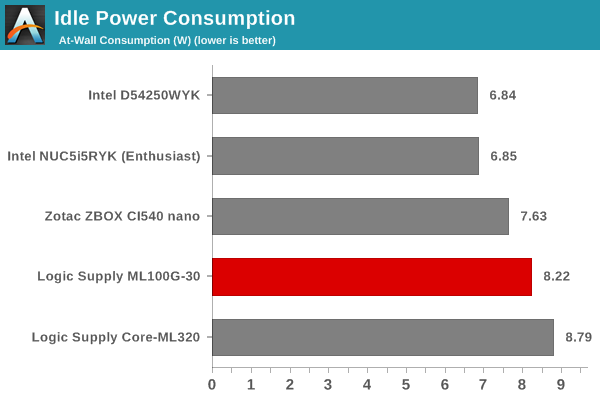 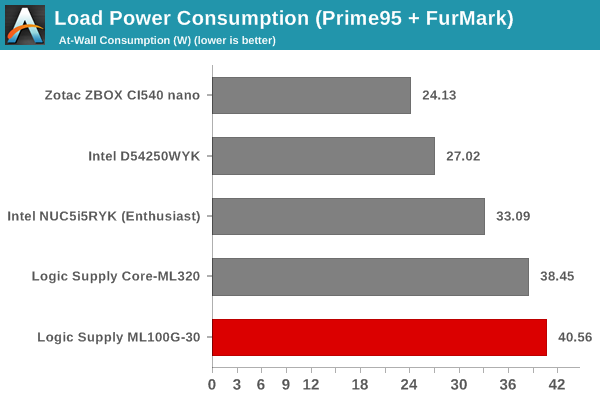 The load power graph is much more interesting. Even though the system could consume up to 40.56 W, it does not sustain this for an extended duration. This aspect will become evident in the graphs below.

In order to evaluate the efficiency of the thermal design, the at-wall power consumptio as well as the frequencies of the various clocks in the systems and the temperature of the various components in the system were recorded in the course of our thermal stress test. We start with the system at idle, followed by 30 minutes of pure CPU loading. This is followed by another 30 minutes of both CPU and GPU being loaded simultaneously. After this, the CPU load was removed, allowing the GPU to be loaded alone for another 30 minutes. 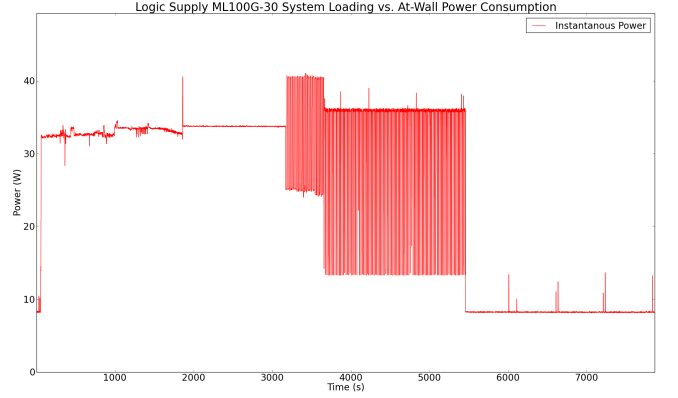 A look at the power consumption at the wall reveals that the unit has a steady state maximum load power consumption around 34 W, but it can spike up to 40 W if needed. A context to the above graph is given by the frequency and temperature graphs below for the same time span. 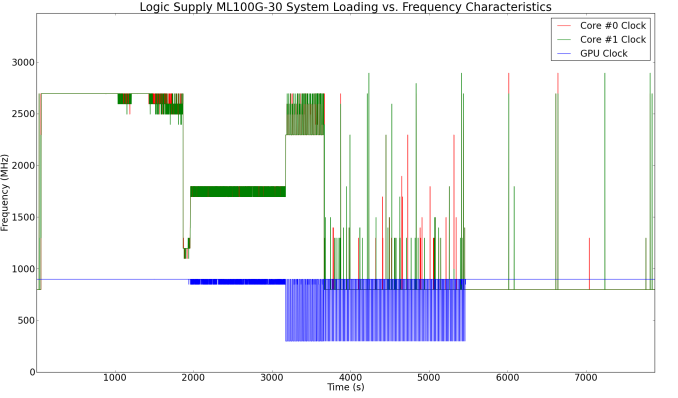 The most important thing to observe with the temperature graph is that DTS never goes to 0 - so, junction temperature is never reached. This is achieved by dialing down the core frequency from 2.7 GHz to 2.5 GHz. Since the Core i5-5300U is rated for a 2.3 GHz operation, one shouldn't term this as throttling. 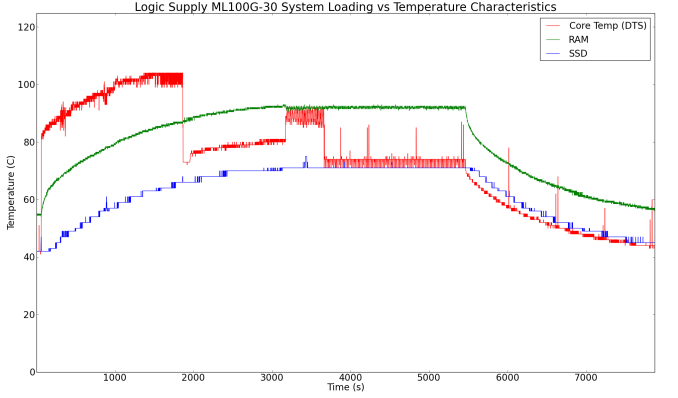 Loading up both the CPU and GPU results in some strange behavior - they manage to share the available headroom by operating between 1.7 GHz - 1.8 GHz and 850 MHz - 900 MHz respectively. However, after around 20 minutes of this sharing, something strange kicks in despite the temperatures and at-wall power consumption being largely stable - the GPU starts oscillating between 300 MHz and 900 MHz, while the CPU cranks up to 2.3 GHz - 2.6 GHz. The temperature also rises correspondingly from 76 C to around 87 C. Removing the CPU load brings the cores to idle at 800 MHz, while the GPU continues to oscillate between 300 MHz and 900 MHz. The thermal solution is able to keep the cores idle around 43 C. 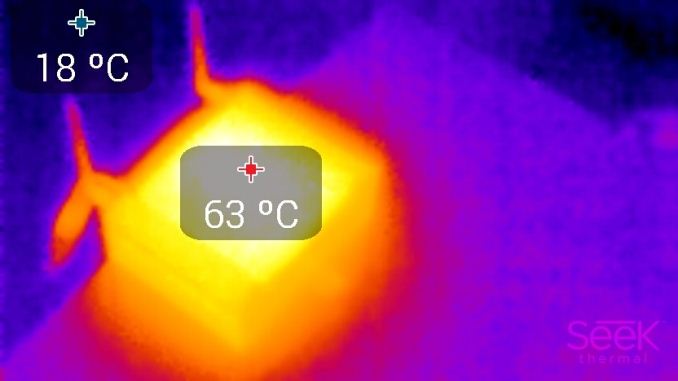 We also took thermal photographs of the other parts of the chassis and they are presented in the gallery below.

The chassis temperatures peak around 65 C, which is a marked improvement over the 80 C we observed in the Core ML320 last year. The ML100G-30 has a better chassis design from a thermal viewpoint and it is made possible due to the increased height of the unit (compared to the ML320).