One of the long-standing demands for Apple’s MacBook Air line has been for an IPS, Retina-density display for Apple’s light laptops. After introducing Retina-style displays on the MacBook Pro, iPad, iPhone, and iMac, the Air was the last product without a Retina display. However at the same time the Air was also simultaneously Apple’s entry-level laptop and their ultra-portable laptop, so adding a Retina display to the Air has always faced the needs of balancing cost and technical considerations against consumer demand.

As it turns out the Air isn’t getting a Retina display (at least not this year), but Apple is going all-in on the more premium MacBook, Retina display, integrated cover glass, and all. From a cost perspective this isn’t all that surprising, but from a technical perspective it means Apple has needed to address the technical cost of going Retina.

Starting from the top, the MacBook ships with a 12” IPS Retina display. The display’s native resolution is an uncommon 2304 x 1440, which is essentially a 16:10 version of the more common 16:9 1440p. With Apple essentially going pro on the MacBook, I’m happy to see a 16:10 display in what’s now Apple’s smallest notebook, increasing the effective size of the display while giving it a more squared design that increases the amount of vertical real-estate versus what a 16:9 display would offer. 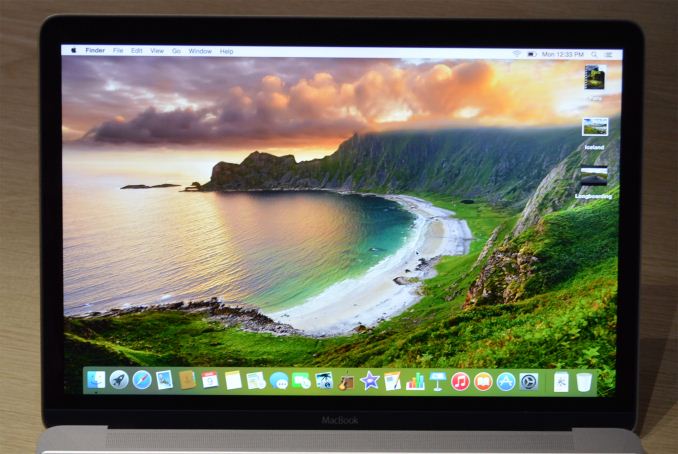 The MacBook’s display ends up being 64.72in^2 in size, roughly 13% larger than the MacBook Air 11”. This comes despite the fact that the MacBook occupies a smaller overall footprint than the MBA 11”, showcasing how Apple has been able to increase the screen size while bringing down the overall laptop size. Some of this is ultimately due to geometry from the different aspect ratio, but also Apple has been able to reduce the size of the bezel surrounding the panel, making the panel a larger percentage of the total lid. The MacBook still isn’t something that most people would qualify as an ultra-thin bezel, but coming from the relatively thick MacBook Air it’s quite the change.

Given the display’s native resolution of 2304 x 1440 contained in a 12” panel, this puts the pixel density of the display at 226 PPI, which is virtually identical to the 226 PPI rMBP13 and 220 PPI rMBP15, giving it same density as Apple’s other Retina laptops. Functionally speaking I’d argue that users are going to have their heads a bit closer to the 12” MacBook than they would a larger rMBP, so the effective density is likely still in the rMBP’s favor, but in terms of construction they’re all very similar.

Meanwhile Apple isn’t going into too much detail on the panel other than its size and driving technology (IPS), but they did tell us that the pixels in this panel were designed to have a wider aperture to allow more light out, helping to offset the higher power costs of lighting a Retina display. To that end Apple says that the MacBook’s display is 30% more energy efficient than any other Mac notebook at an equivalent brightness. At this point we’re still trying to identify the panel supplier, as Apple’s tools have not been very forthcoming. A Sharp IGZO panel would traditionally be a good choice for such a power-constrained device, but it’s entirely possible Apple is going with long-time partner LG as well.

Though regardless of the supplier and aperture improvements, as we’ll see in our battery life benchmarks Apple is clearly still having to devote quite a bit of power towards lighting this screen. Thankfully for Apple however just as with the rMBPs, iPhone, and iPad, this is a one-off cost that they don’t have to pay in future generations. 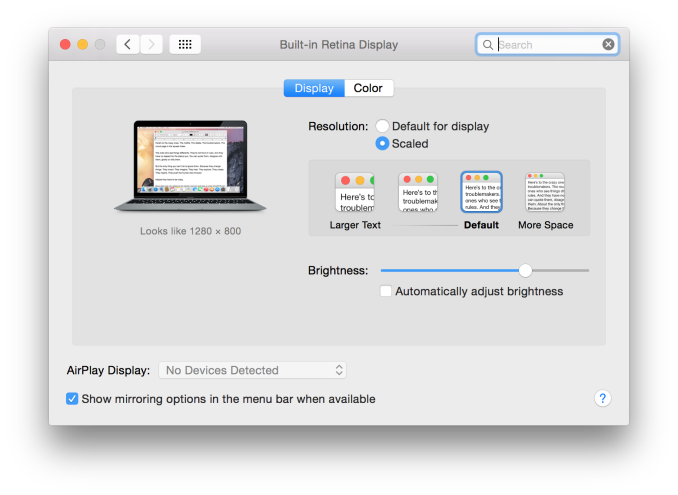 Moving on, as a Retina display Apple offers a range of scaled (virtual) resolutions, with the MacBook’s default resolution serving as a HiDPI version of 1280 x 800. The fact that the scaled resolution is not exactly one-quarter of the display’s physical resolution is an unusual first for an Apple device, but considering the size of the display and power requirements, not to mention the similar PPIs to the rMBPs, I suspect 1280 x 800 scaled on a 2304 x 1440 display was a tradeoff. In any case even without perfect 2:1 scaling Retina-enabled applications look great, and now nearly 3 years after started on Retina in the OS X ecosystem, the number of applications without Retina support are thankfully miniscule.

As far as desktop performance goes, we haven’t found any major problems for the MacBook’s Intel HD Graphics 5300 GPU. Even with Core M’s power limits it doesn’t show any issues holding 60fps at the default virtual resolution of 1280 x 800, though I would not suggest going any higher unless it’s necessary.

Finally, let’s take a look at the MacBook’s display by the numbers. From a design perspective Apple is shipping a pro-quality display, but does the out of the box performance match up with Apple’s high standards? 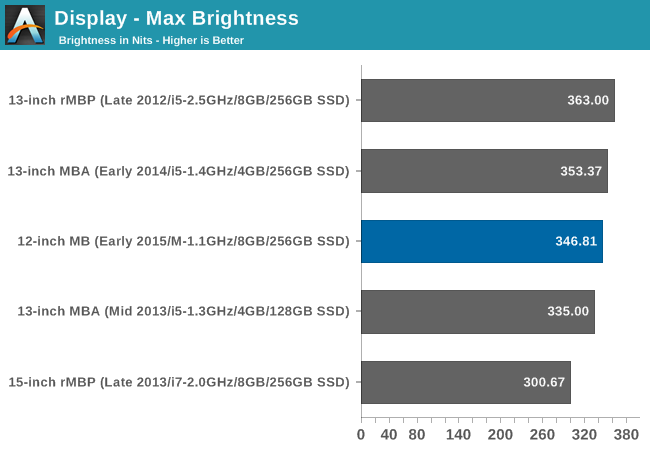 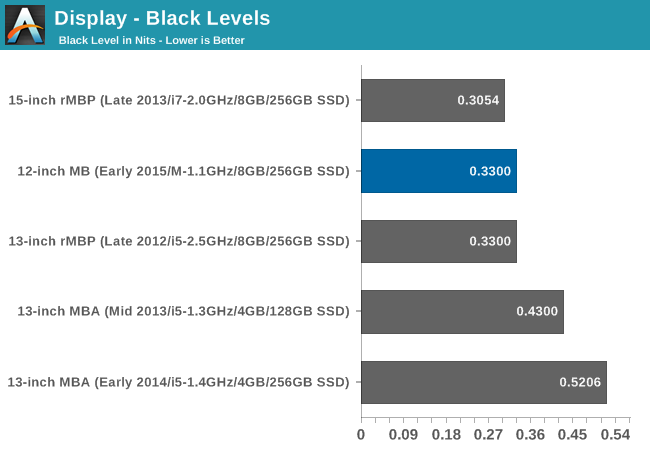 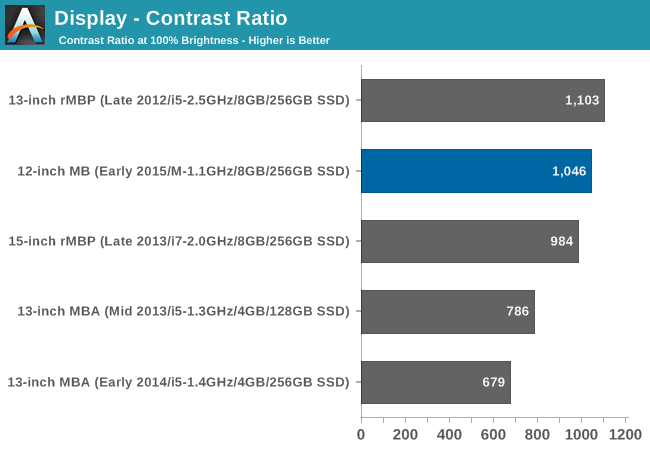 Compared to our most recent MacBooks, the 2015 MacBook delivers contrast performance similar to the Retina MacBook Pros, which is not all that surprising given the shared pixel densities and use of IPS panels among all of these products. Somewhat surprisingly, even with the MacBook’s more limited battery capacity Apple allows the max brightness to go up to 346 nits, in-line with the better-fed rMBPs. At this max brightness setting the black levels work out to 0.33, identical to the 2012 rMBP13. Overall Apple’s black levels tend to be better than average but not fantastic, and the MacBook doesn’t change this.

Otherwise this puts the final contrast ratio at 1046. This is fairly common for HiDPI IPS displays, and though it isn’t chart-topping it’s again right in line with what other Apple laptops do. 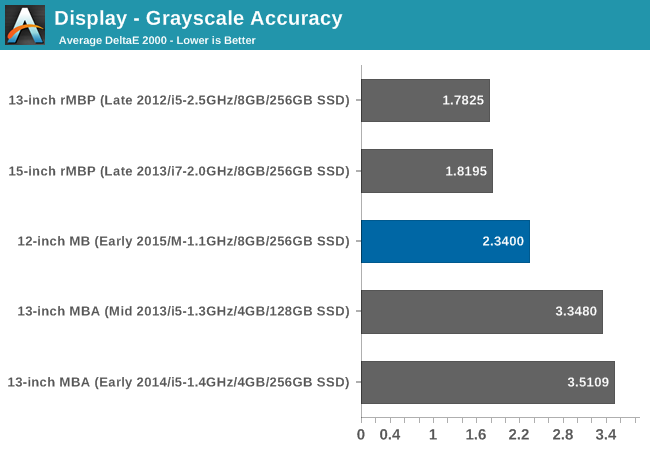 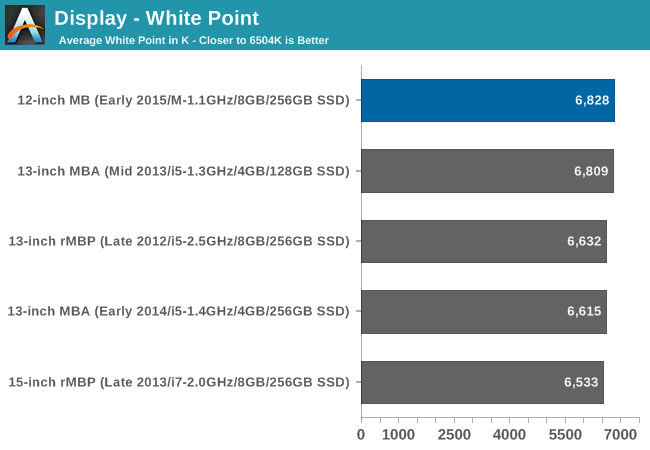 Moving on to accuracy measurements, the MacBook’s greyscale accuracy can’t quite touch the rMBPs, but otherwise at an error of just 2.34 it’s still among the best laptop displays. Even among great PC laptops, out of the box performance below 3 is exceptionally rare. 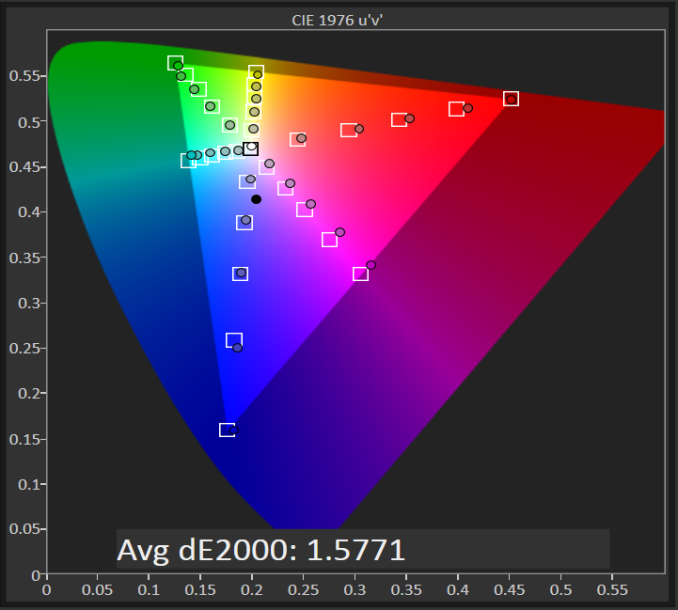 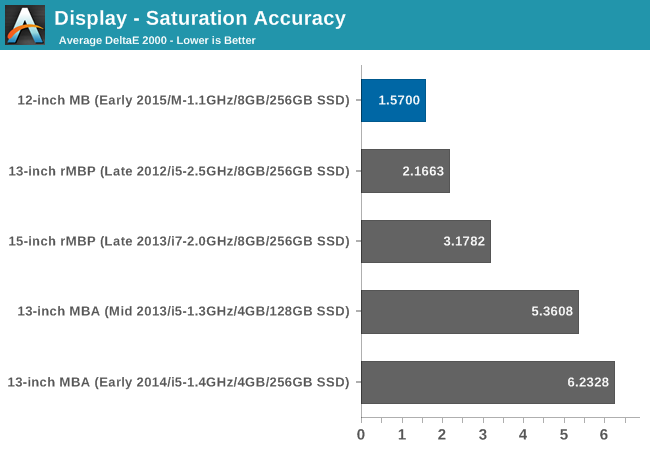 Meanwhile the MacBook’s color saturation accuracy is nothing short of amazing. Here it beats even the rMBPs, not to mention easily surpassing the MBAs and their TN displays. Even though it’s a bit too red, the MacBook is close enough for great out of the box performance. 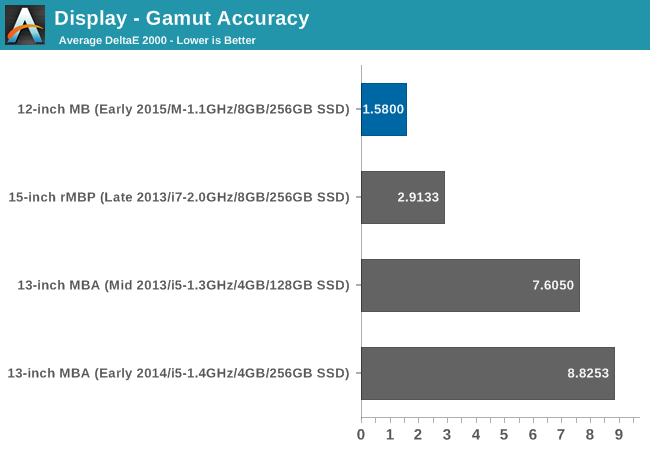 Similar to saturation accuracy, gamut accuracy is well in the MacBook’s favor. Once again even the rMBP we have on file is well behind, never mind the MBAs. 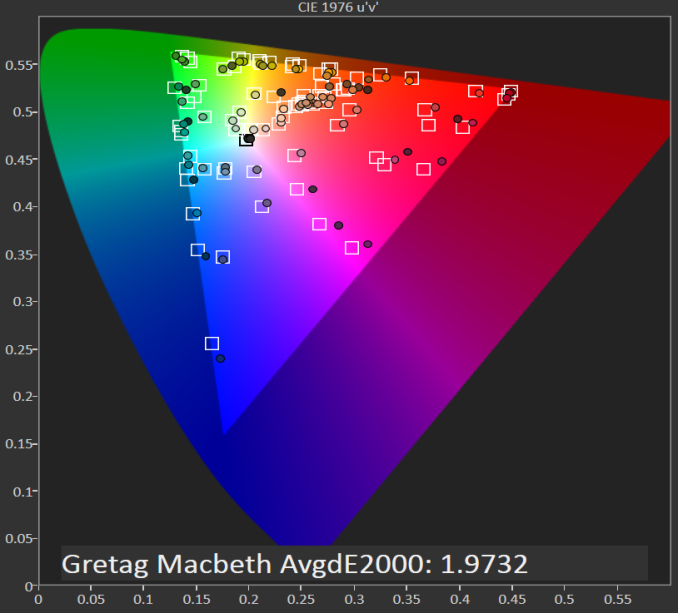 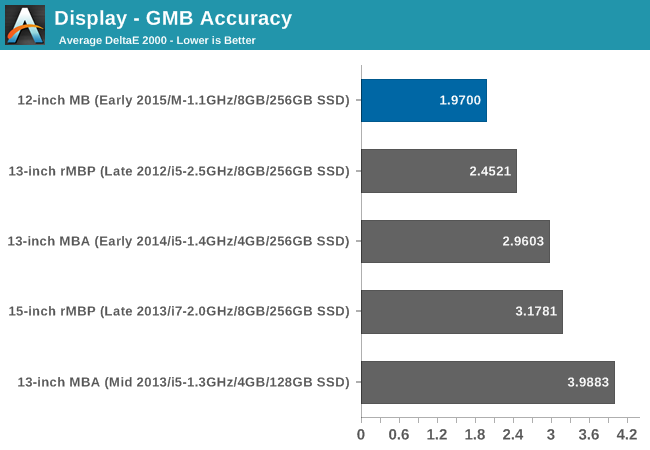 Finally, the GMB color checker results continue to be well in the MacBook’s favor. The error of 1.97 is once more better than any other Mac we have tested, and overall a great place to be at, especially for out of the box performance. Overall this reiterates the fact that while the MacBook may not be classified as a Pro, it without a doubt packs a Pro display.

With post calibration it’s almost certain we could get the errors on the MacBook down to below 1.0. But with such great out of the box performance it’s difficult to complain. Other than for color-critical work, this is a near-perfect reproduction of the sRGB color space.