The Core M processor has a similar GPU to the new Broadwell-U series. The Core M-5Y71 has the HD 5300 GPU, which has 24 EUs (up from 20 on Haswell-U HD 4400) and has a clock speed of 300-900 MHz. This is actually the same number of EUs and frequency as the i5-5200U that we tested in the XPS 13, but of course in a 4.5 watt TDP rather than 15 watts like Broadwell-U. We have already seen that CPU performance is very good on Core M, but GPUs can draw quite a bit of power when pushed to the limit, so we will see how it compares. First up, we can take a look at performance in some synthetic benchmarks starting with Futuremark’s 3DMark. 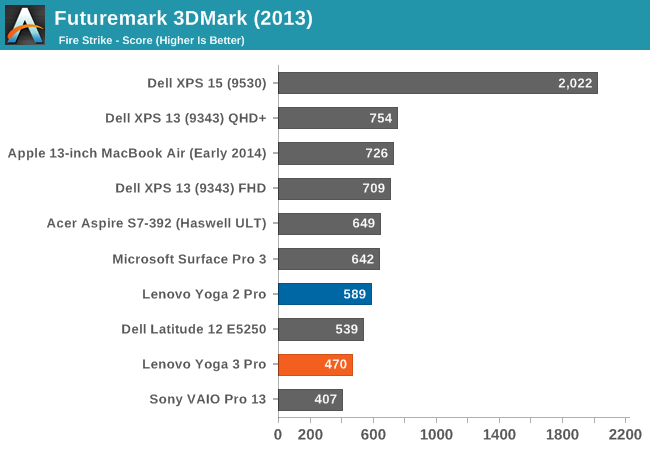 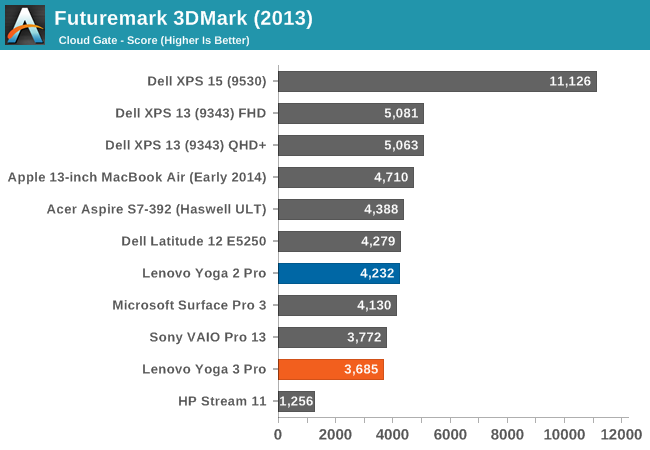 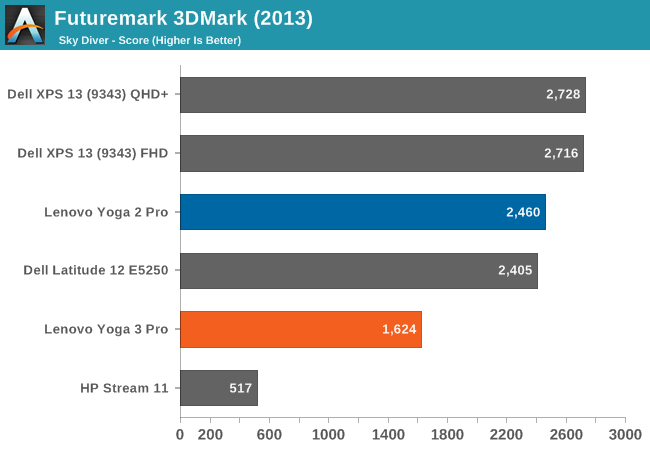 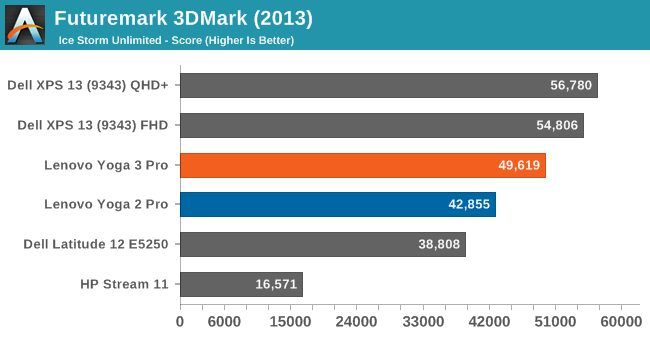 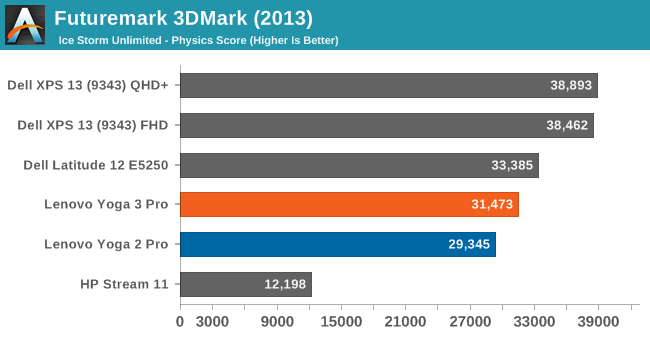 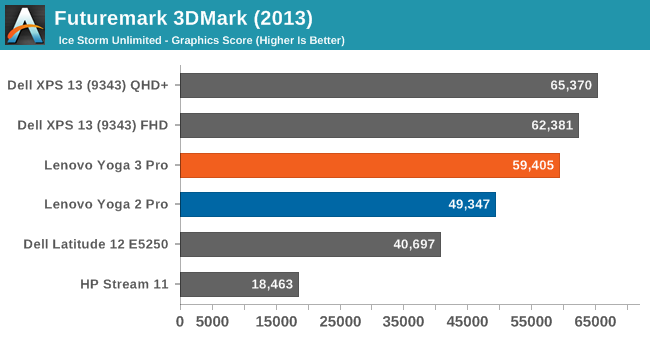 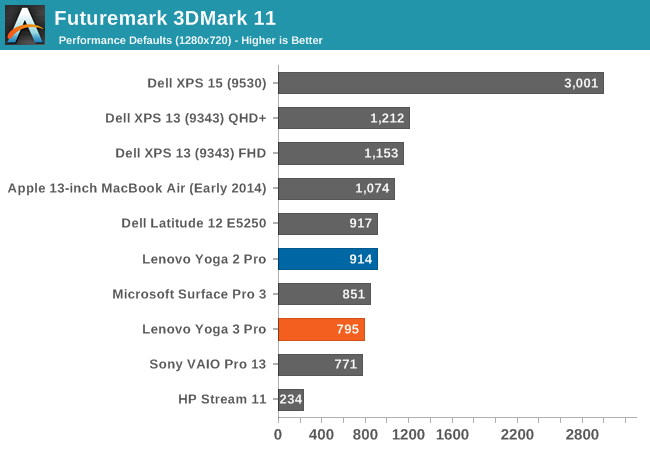 Unlike the CPU, the GPU runs out of headroom much quicker. On any of the sustained benchmarks, the Yoga 3 Pro scores significantly down on both the Haswell-U and Broadwell-U GPUs. Ice Storm Unlimited is the outlier, since it is such a short benchmark. The Core M does improve on Haswell-U in this benchmark. However compared to the HP Stream 11 which has the Atom 5 watt processor, Core M is way ahead here. Intel will be releasing a new Atom this year, and it really cannot come soon enough. Silvermont was a big improvement for Atom, but it is way behind Core M in terms of performance. 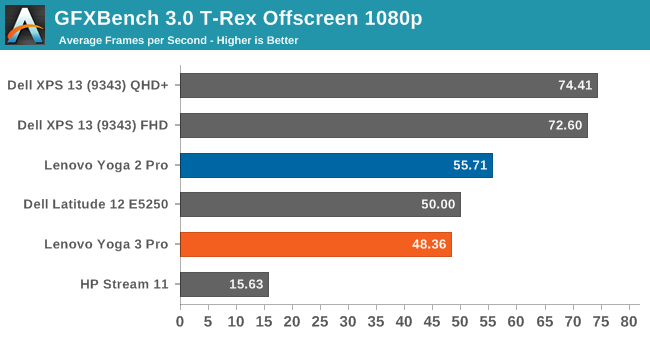 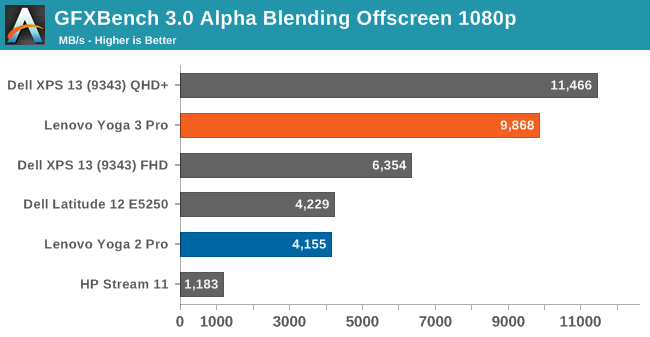 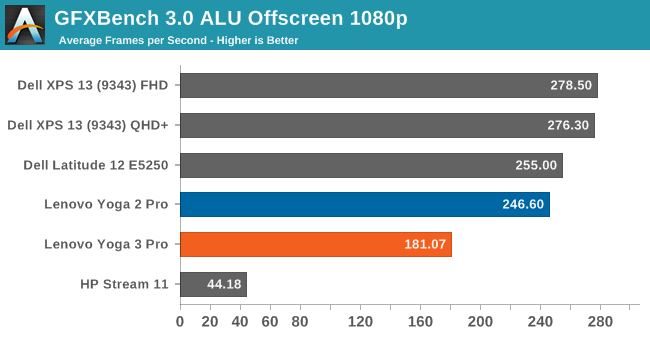 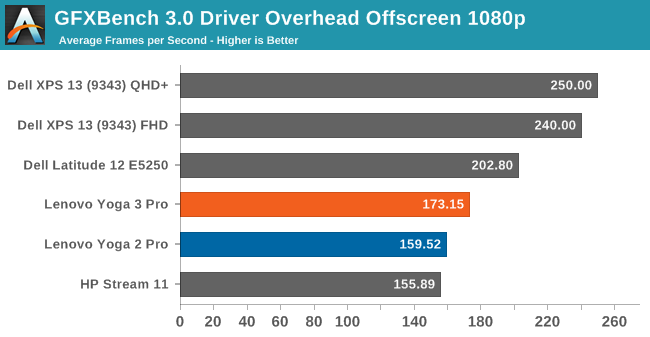 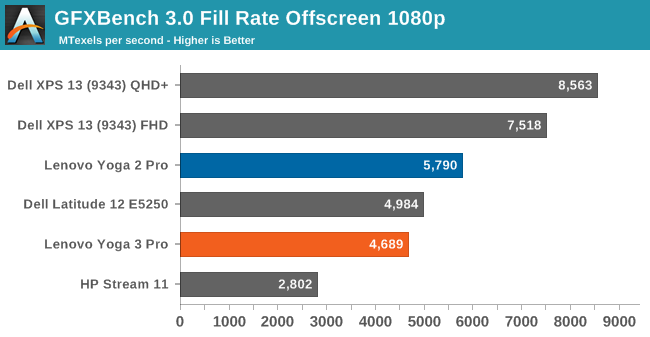 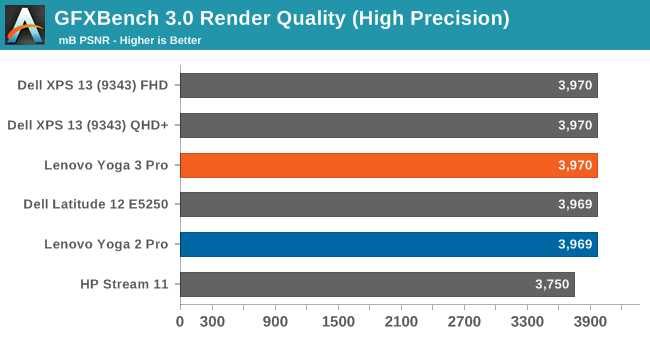 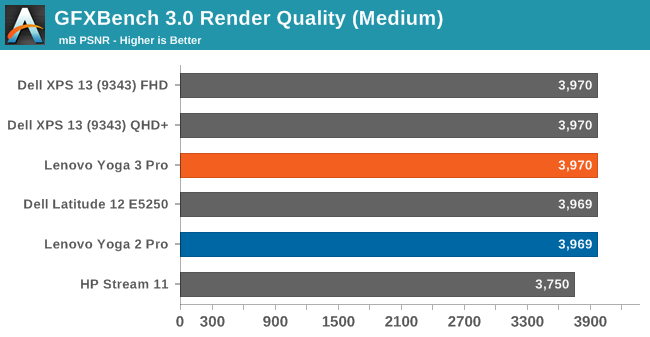 On GFXBench, we see a similar story. The 4.5 watt envelope for Core M restricts the GPU performance quite a bit, and it falls behind all of the other devices except Atom, where it destroys it. The exceptions are Driver Overhead and Alpha Blending, where newer drivers and the architectural changes of the Gen 8 graphics allow the Yoga 3 Pro to pull ahead of the Yoga 2 Pro.

Our final GPU benchmark for Ultrabooks is our new Dota 2 Bench. We only have a single comparison at this point. The Dell XPS 13 has Broadwell-U with HD 5500 graphics. Even though both have the same number of EUs and frequencies available, it is clear the 15 watt part has a lot more headroom to allow the GPU to keep the frequency up. On Dota 2, the Yoga 3 Pro is really only playable on the Value settings, whereas the XPS 13 is over 30 FPS even on the Enthusiast settings.

For the CPU performance, Core M shows that it has the legs to compete against Haswell-U, but on the GPU side of the fence it is a different story. Core M hits the TDP limit much quicker and performance takes a nose dive. Intel still has quite a bit of work left to do on the GPU side.

Even though this is not a pure tablet, it can be used in tablet mode, so we can compare it to those devices as well. 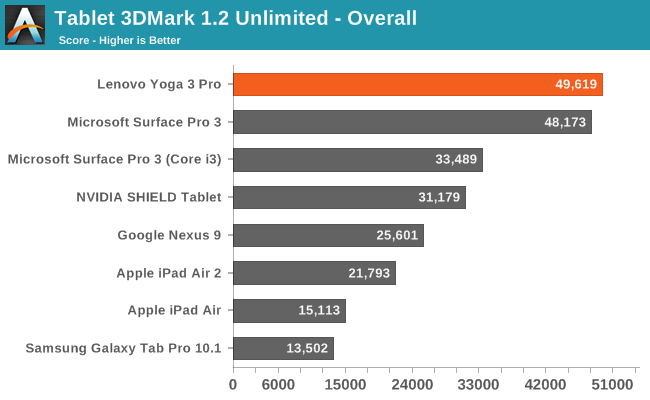 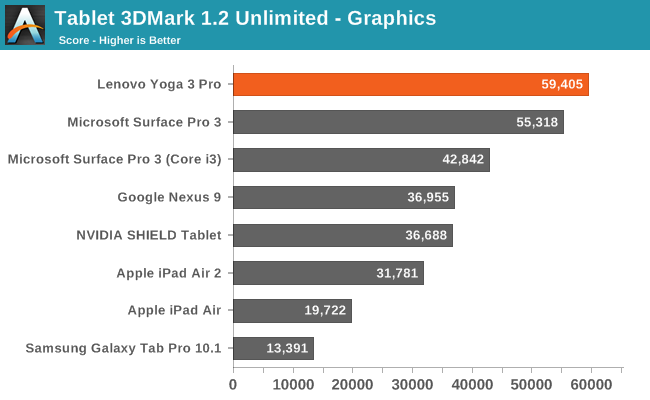 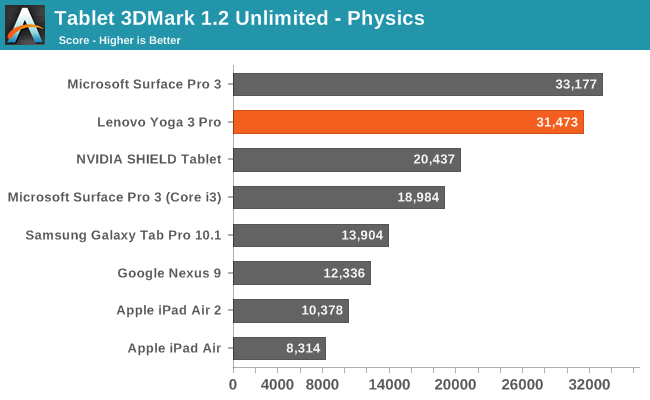 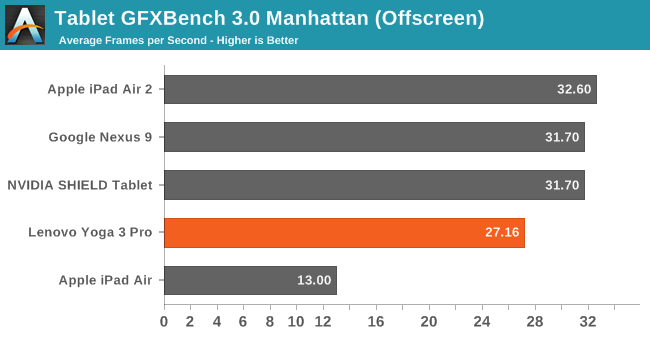 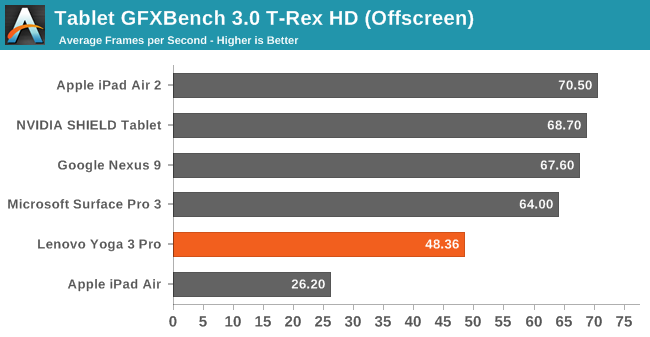 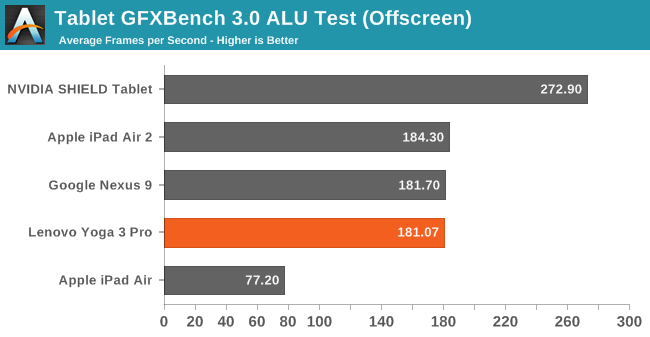 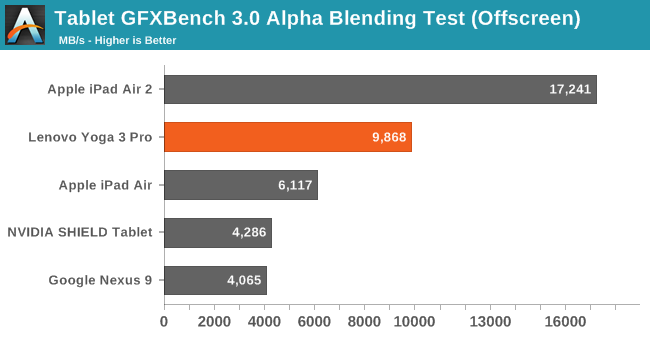 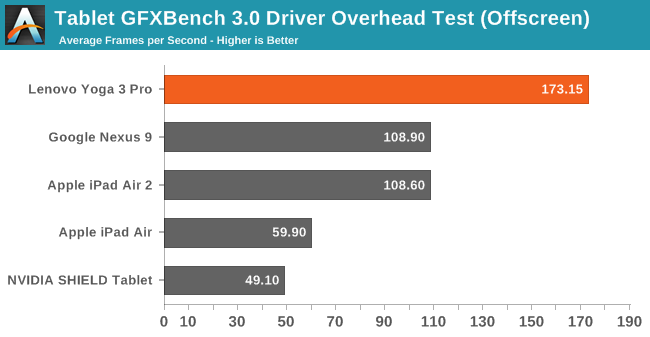 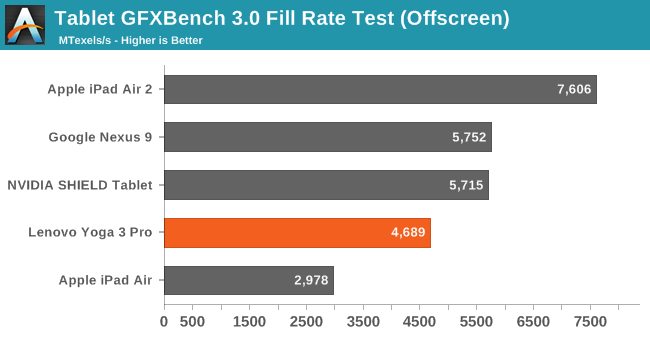 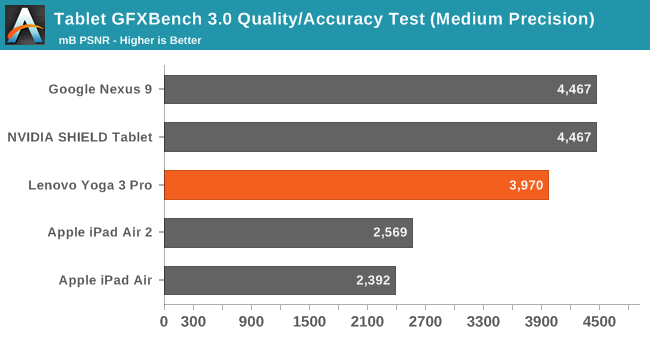 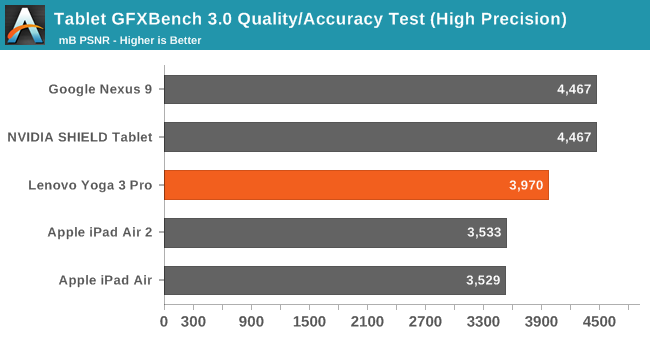 The typical tablet SoC will be very similar to the Core M processor as far as TDP. Though none of the tablets will advertise TDP, under load it is going to be fairly close to 5 watts or so. Some of the higher performance tablets may even pull a bit more power. We see some different results looking at the different benchmarks. 3DMark is very much a win for Core M’s GPU, but the benchmark is very short. It shows the potential for the HD 5300, but on any sustained workloads it bumps into the TDP fairly quickly and the scores go down.

Of note from the 3DMarks scores though is the Physics score, which is a CPU score. Core M has quite a jump in performance compared to the average Tablet SoC. This also is obvious when you compare the web tests between the Core M and a tablet. For instance, the Apple iPad Air 2 scores 4014.3 in Kraken, and the Yoga 3 Pro scores 1729.7 (lower is better – it is a score in milliseconds). WebXPRT is 1728 on the Yoga 3 Pro, but the iPad Air 2 only scores 688 (higher is better) and A8X has three CPUs versus two in Core M. Apple has been touted as having one of the best SoC CPUs, but they are no match for Intel in this arena.

The GPU side is not as rosy though, with the GFXBench scores placing HD 5300 well behind the top tablet GPUs of today. The performance potential is there for HD 5300, but it needs more TDP to exploit it with the current architecture. This is an area where Intel has been upgrading every single year, but the GPU being integrated into the CPU means that GPU updates have to wait for new product launches.