In the previous pages I mentioned I have suspicions that some of the results have been affected by thermal throttling. To confirm my hypothesis, I took my datalogging multimeter and taped its thermal probe on top of the SM951's controller. Then I ran a 128KB sequential write test at queue depth of 32 and plotted the results in the graph below. 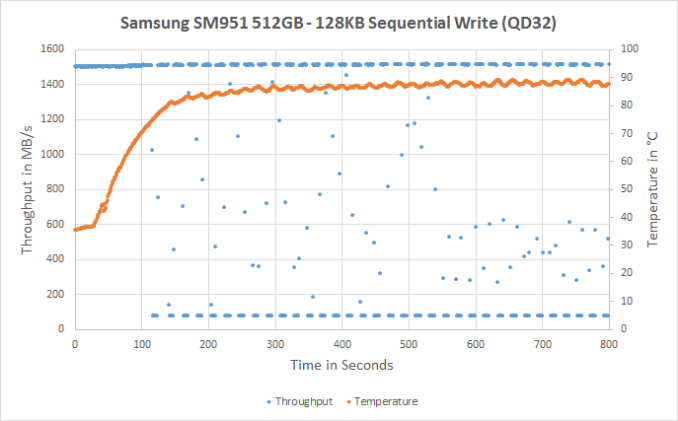 Now it's pretty clear why the performance seemed a bit low in the sequential tests. It takes less than two minutes for the drive to begin throttling itself and the performance drops to ~75MB/s. Because the SM951 is an M.2 drive, it doesn't have a chassis or heatsink to help with the heat dissipation, which combined with the fact that the SM951 is more power hungry than most SATA 6Gbps drives results in throttling issues. That said, the drive shouldn't throttle under normal usage because a continuous two-minute transfer isn't very common, but in some more IO intensive workloads with long transfers (e.g. video editing) there's a chance that performance will be affected by thermal issues.

In any case, I strongly recommend having a decent amount of airflow inside the case. My system only has two case fans (one front and one rear) and I run it with the side panels off for faster accessibility, so mine isn't an ideal setup for maximum airflow.

The move from Windows 7 to 8.1 introduced some problems with the methodology we have previously used to test TRIM functionality, so I had to come up with a new way to test. I tested a couple of different methods, but ultimately I decided to go with the easiest one that can actually be used by anyone. The software is simply called trimcheck and it was made by a developer that goes by the name CyberShadow in GitHub.

Trimcheck tests TRIM by creating a small, unique file and then deleting it. Next the program will check whether the data is still accessible by reading the raw LBA locations. If the data that is returned by the drive is all zeros, it has received the TRIM command and TRIM is functional. 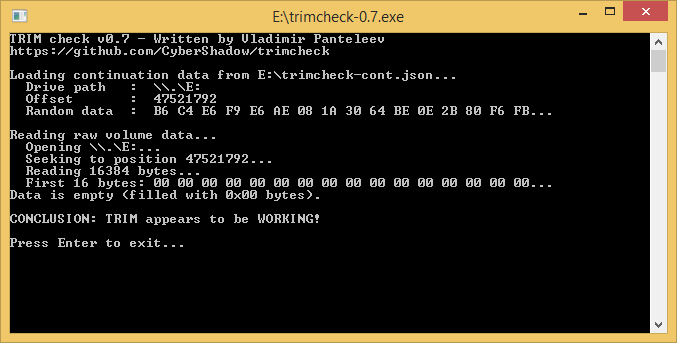 In the case of the SM951, TRIM appears to be working properly.