While NVIDIA has been a GPU company throughout the entire history of the company, they will be the first to tell you that they know they can’t remain strictly a GPU company forever, and that they must diversify themselves if they are to survive over the long run. The result of this need has been a focus by NVIDIA over the last half-decade or so on offering a wider range of hardware and even software. Tegra SoCs in turn have been a big part of that plan so far, but NVIDIA of recent years has become increasingly discontent as a pure hardware provider, leading to the company branching out in unusual ways and not just focusing on selling hardware, but selling buyers on whole solutions or experiences. GRID, Gameworks, and NVIDIA’s Visual Computing Appliances have all be part of this branching out process.

Meanwhile with unabashed car enthusiast Jen-Hsun Huang at the helm of NVIDIA, it’s slightly less than coincidental that the company has also been branching out in to automotive technology as well. Though still an early field for NVIDIA, the company’s Tegra sales for automotive purposes have otherwise been a bright spot in the larger struggles Tegra has faced. And now amidst the backdrop of CES 2015 the company is taking their next step into automotive technology by expanding beyond just selling Tegras to automobile manufacturers, and into selling manufacturers complete automotive solutions. To this end, NVIDIA is announcing two new automotive platforms, NVIDIA DRIVE CX and DRIVE PX.

DRIVE CX is NVIDIA’s in-car computing platform, which is designed to power in-car entertainment, navigation, and instrument clusters. While it may seem a bit odd to use a mobile SoC for such an application, Tesla Motors has shown that this is more than viable. 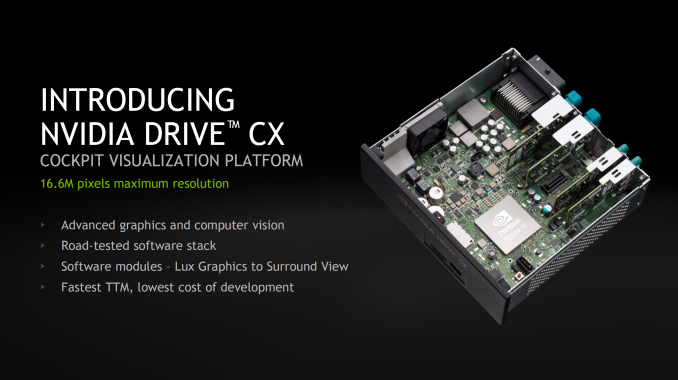 With NVIDIA’s DRIVE CX, automotive OEMs have a Tegra X1 in a board that provides support for Bluetooth, modems, audio systems, cameras, and other interfaces needed to integrate such an SoC into a car. This makes it possible to drive up to 16.6MP of display resolution, which would be around two 4K displays or eight 1080p displays. However, each DRIVE CX module can only drive three displays. In press photos, it appears that this platform also has a fan which is likely necessary to enable Tegra X1 to run continuously at maximum performance without throttling. 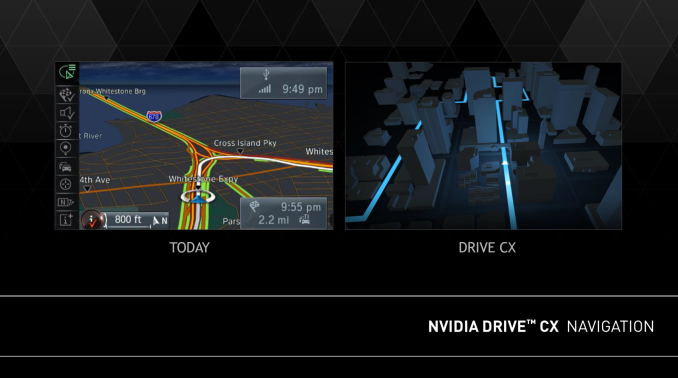 NVIDIA showed off some examples of where DRIVE CX would improve over existing car computing systems in the form of advanced 3D rendering for navigation to better convey information, and 3D instrument clusters which are said to better match cars with premium design. Although the latter is a bit gimmicky, it does seem like DRIVE CX has a strong selling point in the form of providing an in-car computing platform with a large amount of compute while driving down the time and cost spent developing such a platform. 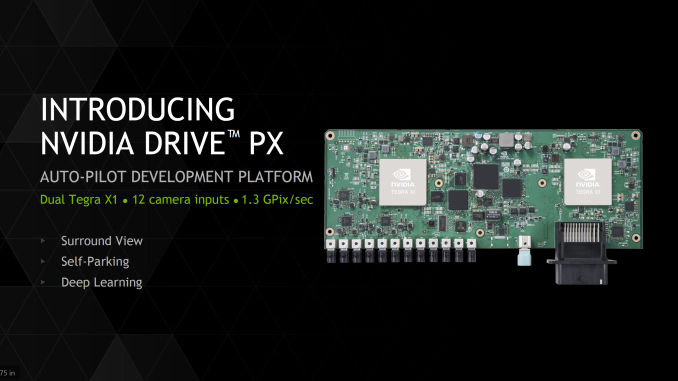 While DRIVE CX seems to be a logical application of a mobile SoC, DRIVE PX puts mobile SoCs in car autopilot applications. To do this, the DRIVE PX platform uses two Tegra X1 SoCs to support up to twelve cameras with aggregate bandwidth of 1300 megapixels per second. This means that it’s possible to have all twelve cameras capturing 1080p video at around 60 FPS or 720p video at 120 FPS. NVIDIA has also made most of the software stack needed for autopilot applications already, so there would be comparatively much less time and cost needed to implement features such as surround vision, auto-valet parking, and advanced driver assistance. 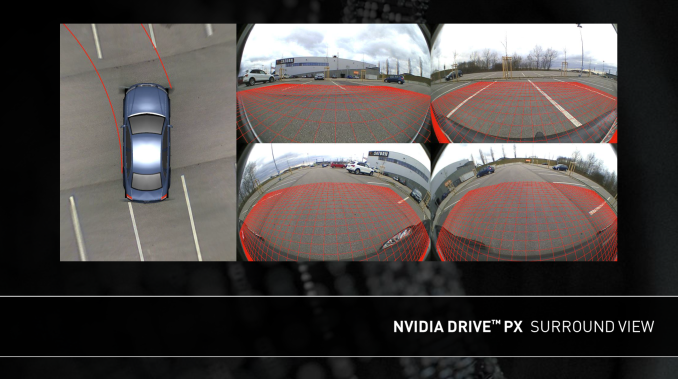 In the case of surround vision, DRIVE PX is said to deliver a better experience by improving stitching of video to reduce visual artifacts and compensate for varying lighting conditions. 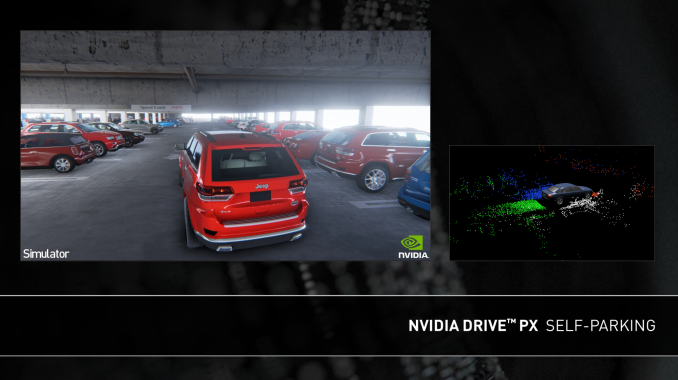 The valet parking feature seems to build upon this surround vision system, as it uses cameras to build a 3D representation of the parking lot along with feature detection to drive through a garage looking for a valid parking spot (no handicap logo, parking lines present, etc) and then autonomously parks the car once a valid spot is found. 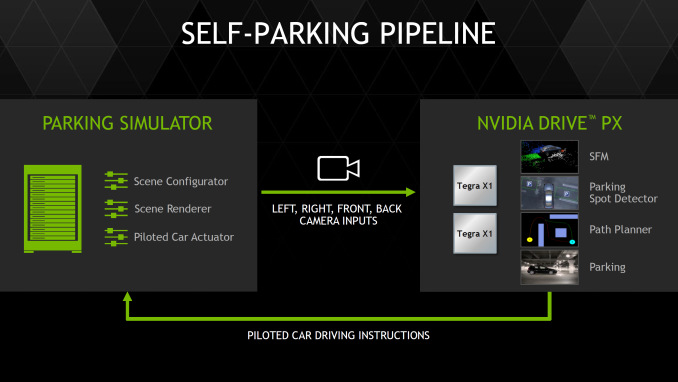 NVIDIA has also developed an auto-valet simulator system with five GTX 980 GPUs to make it possible for OEMs to rapidly develop self-parking algorithms. 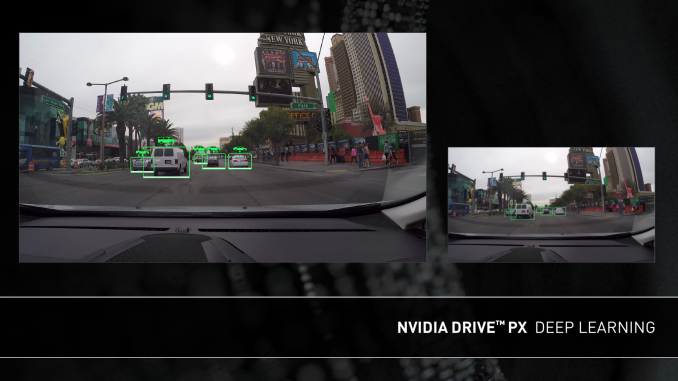 The final feature of DRIVE PX, advanced driver assistance, is possibly the most computationally intensive out of all three of the previously discussed features. In order to deliver a truly useful driver assistance system, NVIDIA has leveraged neural network technologies which allow for object recognition with extremely high accuracy. 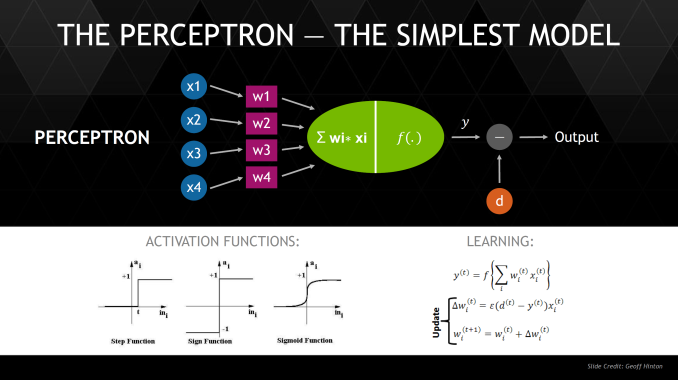 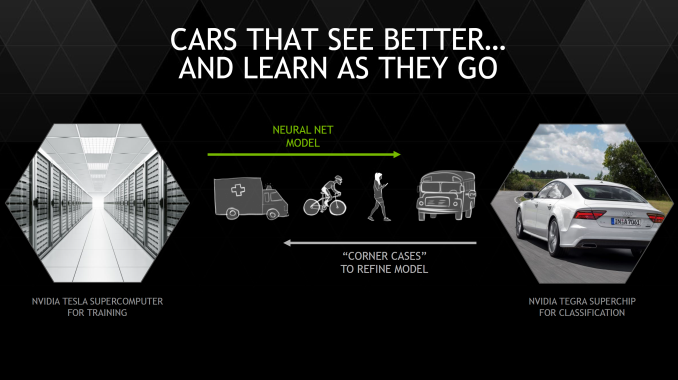 While honing such a system would take millions of test images to reach high accuracy levels, NVIDIA is leveraging Tesla in the cloud for training neural networks that are then loaded into DRIVE PX instead of local training. In addition, failed identifications are logged and uploaded to the cloud in order to further improve the neural network. Both of these updates can be done either over the air or at service time, which should mean that driver assistance will improve with time. It isn’t a far leap to see how such technology could also be leveraged in self-driving cars as well. 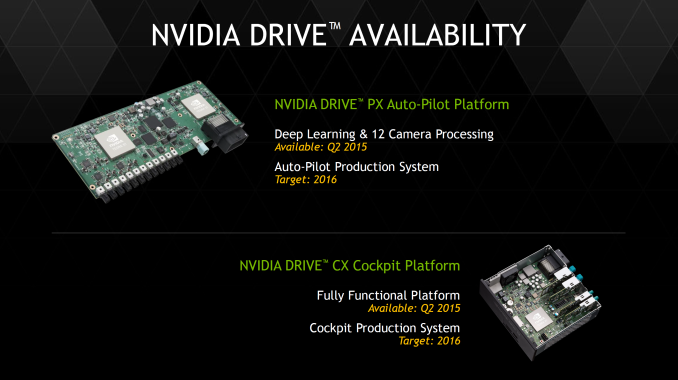 Overall, NVIDIA seems to be planning for the DRIVE platforms to be ready next quarter, and production systems to be ready for 2016. This should mean that it's possible for vehicles launching in 2016 to have some sort of DRIVE system present, although it's possible that it would take until 2017 to see this happen.