When I discovered the Stream 7, I purchased it because I was genuinely intrigued about what exactly you can get for $119, or even $99. Android devices at that price point have always been thoroughly unimpressive and just terrible devices in general. Windows 8.1 with Bing has allowed Windows manufacturers to compete with these devices on every level, as they are no longer held back by the cost of including Windows. I don't know how well this strategy is going to work out for Microsoft in the end, but it certainly works out well for the consumer.

One thing that motivated me was the general lack of coverage for devices at the low end of the market. News coverage and reviews always seem to focus on the newest iPad, the newest Galaxy Tab, or the newest Ultrabook. There's not as much attention paid to these inexpensive devices, and it's problematic because many people simply cannot afford premium devices that cost hundreds or even thousands of dollars. If nobody takes a look at the low end, there's also no push for manufacturers to improve those devices. While I don't think that the entire market should race to the bottom, I think that the people who cannot afford the newest and most expensive device still deserve to have a good experience offered to them within their budget.

The HP Stream 7 is not a flawless device by any measure, but no device really is. What can be said is that the Stream 7 does its best to provide a good experience at a great price. There are always going to be compromises to achieve a lower price point, but I think HP has given users a lot of value for their dollar. Including an IPS panel was a choice I applaud, as on a tablet the poor viewing angles of a TN can be a massive problem. It's not the world's best IPS panel, but it's better than many competing devices and it's better than you might expect for a $119 device. Two years ago, the Nexus 7 had a similar panel and cost nearly twice as much.

The CPU performance on the Stream 7 is also very good, and the device was usually very smooth in use. The 1GB of RAM can definitely be problematic, with apps having to reload and taxing applications causing the device to chug, but it's something that can be excused for $119. Graphically intensive applications are going to be more problematic, and this certainly isn't going to compete with the likes of NVIDIA's SHIELD for gaming, but it's still possible to play quite a few less demanding games. 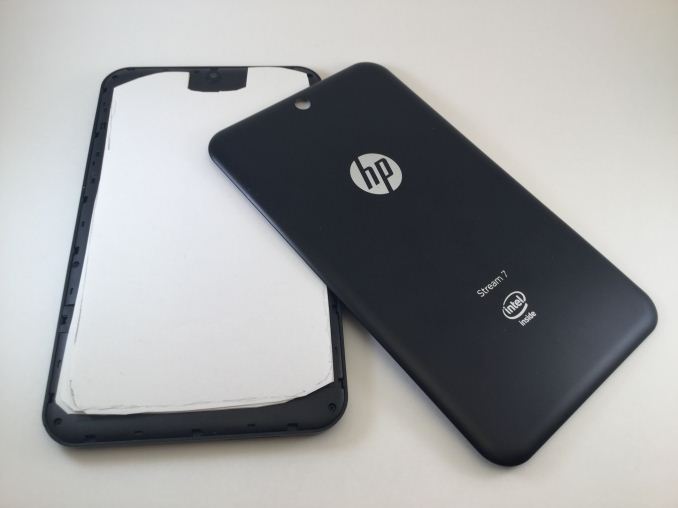 There are some issues that I think could have been fixed, and I hope that in a future tablet HP is able to improve on these things without compromising the quality of everything else. One of these things is the build quality, which is quite good right up until you start examining the back cover. Truth be told, I have four layers of paper cutouts that I've stuffed under the back, and it makes the device feel much more solid in the hand. This may have an impact on thermal performance though, and so I did our testing without them.

If there's anything I recommend for HP going forward, it's to do away with the removable back so the flex can be eliminated, which means adding the microSD slot to one of the sides. I think the inclusion of a 2MP rear camera was also misguided. It seems more like an attempt to just check off a box on a feature checklist. If there's anywhere for a 2MP camera on this tablet, it should be on the front, with the money for the other camera module going toward something like improving the build quality or the battery capacity.

That brings me to my last issue, which is the battery life. 11.1Wh is quite small for a tablet, and unfortunately when paired with the rest of the hardware you get short battery life. Five hours from a Windows laptop might still seem acceptable, but it's far easier to plug in a laptop and interact with in on your desk than to plug in a tablet that you're holding in your hands.

All that being said, I think most of these items can be excused at $119. Some people may feel this is just trying to ignore all the flaws, but the truth is that at $119 a buyer needs to manage their expectations. The Stream 7 provides a lot more for $119 than you would expect. $100 Android tablets can be equally bad in a variety of areas, so the fact that the Stream 7 works as well as it does is a decent starting point.

There is one issue I didn't list above, and it's because it's quite severe and it prevents what I felt could have been a great use case for this tablet. The amount static and noise when using the 3.5mm jack on the Stream 7 is completely unacceptable for any device at any price point. It's actually hard to overstate this, because we're not talking about some minor background noise. The 3.5mm jack is essentially unusable. The fact that this issue made it to production is extremely concerning, and it ruins the tablet's usefulness as a media player unless you use Bluetooth headphones/speakers or are able to use the built-in speaker without bothering anyone. 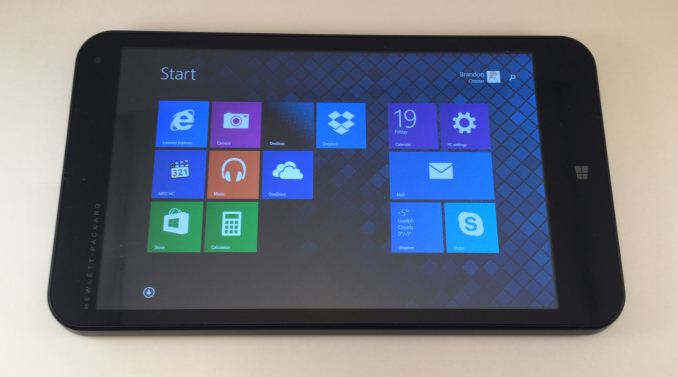 Overall, I still think that the Stream 7 is a good tablet when evaluated against the many different tablets on the market. It's not the best tablet overall, but I think it's the best tablet at its price point by a large margin. I cannot recommend it to anyone looking for a media player due to the issue with the headphone jack, which is a huge shame because it's able to run Media Player Classic Home Cinema perfectly. I also think that anyone looking for something to act as their main computer should try to save up a bit more money for something with two or more gigabytes of RAM to ensure a good experience when running more intensive software.

But for anyone looking for a supplementary device, or just something to play around with, I think the Stream 7 is a great purchase. Anyone looking for an Office 365 license should also see if they can find the Stream 7 on sale for $99, as it comes with Office 365 for not much more than the cost of an individual license. I hope that HP can improve on the Stream 7 in future tablets, and I hope other manufacturers create their own devices to compete in this price range so consumers will have more – and more importantly, better – options at the low-end.

It's always good to see technology brought to the masses, and HP has made some great progress in doing that with the Stream 7. It's flawed in areas, but if nothing else the price point can get Windows tablets into the hands of many users. That could be equally beneficial to Microsoft, which is no doubt a major part of the reason for the existence of Windows 8 with Bing. More users means there's more of a market for developers to target, which will hopefully lead to better and more abundant Modern apps in the future.