Three times's a charm, but what about the fourth?

When the GeForce3 was released, NVIDIA wowed the press and end-users alike. They did so not with benchmarks or extremely high frame rates, but with the promise of enabling much greater reality in games. This lends us to the classic chicken and the egg syndrome when it comes to 3D graphics. Developers aren't going to spend time incorporating features such as DirectX 8 pixel and vertex shaders into their games unless the vast majority of the market has hardware capable of supporting such features. At the same time, the hardware will never make it out to the market if the vendors aren't producing it with the knowledge that end-users will essentially be paying for features they won't use for maybe even two years. Luckily both ATI and NVIDIA have provided the necessary hardware to make that a reality and now they're both on a quest to outfit the vast majority of the market that is still running on pre-GeForce3 platforms with better cards.

The overall recommendations for the GeForce3 were that the technology has promise but there was no reason to purchase the card upon its release because of a lack of games that demand that sort of power. Fast forwarding to today, there's still no compelling reason to have the power of a GeForce3 however with NVIDIA's introduction of the GeForce3 Ti 200 it doesn't make sense not to have a GeForce3.

The beauty of the GeForce3's introduction was that it was brought to market alongside a brand new API by Microsoft, DirectX 8. This gave the features that the GeForce3 touted much more credibility since they would definitely be used in games going forward. The launch of the GeForce4 isn't as blessed as DirectX 9 still lies in the somewhat distant future. The task on NVIDIA's hands is to make the GeForce4 as attractive as possible with other tangible features to convince the world to upgrade. It's up to you to decide whether the features are worth it, and it's up to us to present them to you.

The GeForce4 core, as we've mentioned before, has been using the codename NV25 on all NVIDIA roadmaps. Architecturally, the core is quite impressive, as it is approximately 5% larger than the NV20 core while built on the same 0.15-micron process; keep that in mind as we go through the improvements the NV25 offers. 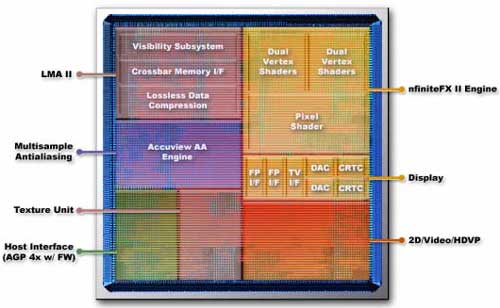 As you can see from the above picture of the NV25 core, the second vertex shader unit occupies a decent portion of the GPU's die. Just by visual estimation we'd say that the second vertex shader is around 6.25% of the GeForce4's die. Going back to the first thing we said about the NV25 core, the fact that it's only 5% larger than the NV20 core becomes that much more impressive.

The pixel shader unit remains unchanged as does the majority of the rendering pipeline. The core still features 4 pixel pipelines and is capable of processing two textures per pixel; because of the core's programmable nature, it is possible to enable single pass quad-texturing just as was the case with the original GeForce3.

The vast majority of the performance improvements of the NV25 core come from what NVIDIA is calling their Lightspeed Memory Architecture II. Before we get to what's new about LMA II let's talk about what's borrowed from the GeForce3.

NVIDIA's crossbar memory architecture is still present from the GeForce3. The architecture dictates that the GPU be outfitted with not one but four independent memory controllers, each with their own dedicated 32-bit DDR memory bus. All memory requests by the GPU are then split and load balanced among the individual memory controllers. What's interesting to note here is that the GeForce architecture benefits from this granularity in memory accesses while the same cannot be said for all GPU architectures. When ATI was designing the R200 core that went into the Radeon 8500 they noticed that by moving to larger 128-bit memory accesses rather than smaller memory accesses they saw a performance boost in most situations. ATI attributed this to the nature of some of their GPU caches.

This brings us to a new feature of the NV25's LMA II - NVIDIA's Quad Cache. With so much going on in the CPU world, you should already understand the need for efficient and high performance caches in any processor (graphics included). The Quad Cache is NVIDIA's name for the NV25's primitives, vertex, texture and pixel caches. The names of the four caches clearly explain their purpose in the GPU; the primitives and vertex caches store triangle data while the texture and pixel caches store texture and pixel data respectively. Not much is known about the size of these caches or how they've changed from those that were present in the GeForce3 but they are worth mentioning. It should also be mentioned that these types of caches aren't exclusive to the NV25 as the Radeon 8500's core has a similar set of caches. The reason caches play a much smaller role in the discussion of GPUs than they do in the CPU world is because they are not nearly as large of a portion of a GPU's core as the L1 and L2 caches are on most CPUs. Remember that today's GPUs run much slower than their memory busses while today's CPUs run 2 - 16 times faster than their memory buses thus making cache a much more important part of a CPU than of a GPU.

Lossless Z-buffer compression is present in the NV25 core seemingly unchanged from the GeForce3. As you'll remember from our technology overview of the GeForce3, z-buffer data (data that indicates how "deep" in the screen or far away an object is from the user) is actually very easily compressible. Using a lossless compression algorithm, meaning that once uncompressed the data's values will be identical to their original form (much like zip file compression), NVIDIA is able to attain up to a 4:1 compression ratio on z-buffer data. Since a great deal of memory bandwidth is used by z-buffer reads and writes (the z-buffer is read from whenever a pixel is drawn), this compression can improve memory bandwidth utilization significantly. This is unchanged from the original GeForce3 core and a similar feature is present in all Radeon cores.

Fast Z-clear also makes its way from the original GeForce3; this technology, also found in the Radeon cores, is an ultra-fast algorithm that is used to set all of the values in the z-buffer to zero. Why would you want to do that? After rendering a scene, the z-buffer values are no longer of any use for the next scene and thus must be discarded.

By far the biggest improvement in the NV25's architecture that more than justifies calling it the 2nd generation Lightning Memory Architecture are the improvements in the Visibility Subsystem. The original GeForce3 introduced a feature that is known as Z-occlusion culling, which is essentially a technology that allows the GPU to look at z-buffer values in order to see if a pixel will be viewable when rendered. If the pixel isn't viewable and will be overwritten (or overdrawn) by another pixel, then the pixel isn't rendered and memory bandwidth is saved. This addresses the problem known as overdraw and in the NV25's architecture the performance of the Z-occlusion culling algorithms have been improved tremendously. While NVIDIA vaguely states that "LMA II increases fill rates by optimizing the read, write and selection of pixels to be rendered" this is one of those cases when reality is understated by marketing. You'll get to see the performance data behind this in the test section, but the GeForce4, clock for clock, is approximately 25% more efficient at discarding unseen pixels than the GeForce3.

The final feature of LMA II is what is known as auto pre-charge. Remember that unlike cache, DRAM is capacitance based and thus must be refreshed in order to retrieve data from a DRAM cell. The benefit of this is that DRAM can be manufactured using far fewer costly components than cache but the downside being that there are sometimes hefty delays in getting access to information. One of those such delays occurs when attempting to read from or write to a part of memory other than the current area being worked with. What auto pre-charge does is it uses a bit of logic in the memory controller to effectively guess at what rows and columns in the DRAM array will be accessed next. These rows and columns are then charged before they are used thus reducing the amount of time that the GPU will wait if it does end up requesting data from the precharged rows/columns (banks). Should the GPU not request data from those banks then business is as usual and nothing is lost.

Auto pre-charge in addition to the NV25's Quad Cache are very necessary in preventing the GPU from wasting precious clock cycles in an idle state, waiting for data from memory. Auto pre-charge won't offer more memory bandwidth directly however it will offer lower latency memory accesses which does in turn translate into a greater percentage of useful memory bandwidth.