Final Words: What to do until DVI - Improving Image Quality on NVIDIA cards

Instead of closing on a "it'll be great once everything uses DVI" quote, we'll leave you on a more practical note. There are many downsides to being the most popular graphics card manufacturer on the planet, and for NVIDIA one of those happens to be that they cannot strictly control and monitor the production of all boards that carry their name. By allowing third party manufacturers (such as ASUS, Chaintech, Gainward, Visiontek, etc…) to produce boards for them, NVIDIA is leaving the role of quality control in the hands of their manufacturers. For the most part, because of the reference designs that NVIDIA provides there are relatively few problems with these third party boards. One of the relatively few problems that do exist is the issue of image quality.

The problem with NVIDIA cards arises when a third party manufacturer's low-pass filter filters out some of the important frequencies as well as those that aren't needed. It is unlikely that the capacitors and inductors that make up the low-pass filter are deliberately chosen to be of poor quality, rather the rating of the components is not up to par with what NVIDIA's specifications call for. Another possibility is that when these third party manufacturers purchase the components for these filters some end up being of higher quality than others. This would explain the seemingly sporadic nature of what cards in particular have these image quality issues. Regardless of what the reason behind the low-pass filter causing these issues, there is a quick and dirty fix for the problem - remove the low-pass filter. This has been documented in the past here, but hope to present this information to a broader audience with this article, as well as to provide some of our own insight on how to perform this mod in the simplest possible fashion.

Note that by removing the low-pass filter you will be voiding your warranty on your card and we cannot be held responsible for any damage done to your card. With that out of the way, the process is actually very simple. On all NVIDIA reference designs since the original GeForce, the low-pass filter is readily identifiable by 3 sets of 3 capacitors connected in parallel with 2 sets of 3 inductors in series near the VGA output connector. The 3 sets are for the 3 components of the RGB signal being sent to your monitor - red, green, and blue. Most board designs also offer a set of protection diodes as well although not all of these components will be found on all boards. 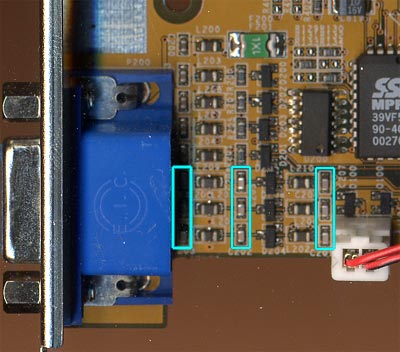 On GeForce3 boards with a DVI-I connector, the low-pass filter is located near the DVI-I connector. If there is no DVI-I connector present then you'll find the filter components either near the VGA output or where the DVI output would be located if it were included. 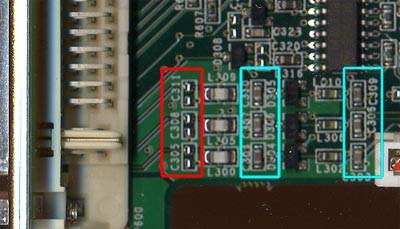 This Visiontek GeForce3 Ti 500 already has one column of capacitors removed (red box), so it's no surprise that it also has very good image quality. These capacitors are located near the DVI connector on the board. When you've clipped the capacitors all that should remain is what you see in the red box above.

The fix is accomplished by merely clipping off the 9 capacitors using a pair of needle nose pliers; this won't harm the board if done properly. The end result depends on how bad the image quality of your card was prior to the mod. We have seen results ranging from virtually no change at all to a dramatic improvement, even on a card that had pretty crisp output to begin with.

To completely remove the low pass filter, you'd want to short the inductors to bypass those as well. Our experience has shown that this considerably more complicated procedure has yielded diminishing returns once the capacitors have been removed.

Again by removing this filter you are allowing higher frequencies to pass through that normally wouldn't which could cause interference with other devices, although it's highly unlikely.

Update: We must warn you against removing what may look to be capacitors from your card. Certain boards do not implement a third row of capacitors as seen in the pictures above, rather they feature a row of resistors. The below picture is from a Visiontek GeForce3 Ti 200: 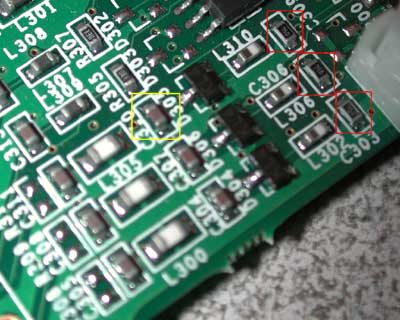 Why is this mod not necessary on ATI and Matrox cards? Until recently both ATI and Matrox manufactured all boards based on their chips by themselves and thus had very strict control over all component sourcing. We have yet to see whether ATI's decision to allow third party manufacturers to produce ATI graphics cards will result in the same issues end users face with image quality on NVIDIA cards.

Eventually worrying about image quality loss as a result of poor RAMDACs or subpar low-pass filters will be a thing of the past and the DVI standard will help to ensure that.