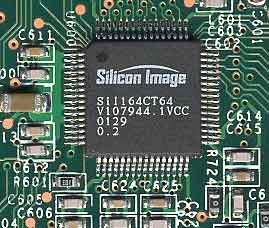 If your NVIDIA card has a DVI connector, you'll most likely find one of these on the card as well

In order to address these shortcomings, NVIDIA boards are outfitted with a second external TMDS transmitter generally one manufactured by Silicon Image. Depending on the design of the board this transmitter could either work as a second link in conjunction with the GPU's integrated TMDS link or it could bypass the integrated TMDS just as easily. It is unclear exactly why NVIDIA's integrated TMDS isn't up to the task but if they did eventually fix the issue it could save board manufacturers a bit in manufacturing cost to not have to include an external TMDS on every graphics board. Because of this external TMDS, resolutions up to 1920 x 1440 can be used via the DVI-I connector.

You may run into some NVIDIA cards with a DVI connector that simply won't work with a DVI display plugged in. We conducted an informal test of a few of the DVI equipped cards we had in the lab and although all of the newer Titanium cards worked just fine, the Gainward GeForce3 would not work nor would NVIDIA's Reference GeForce2 MX. If you have one of the newer Titanium cards you should have no problem running at any of the higher resolutions, although most documentation still states a maximum of 1280 x 1024. We confirmed this on an Apple Cinema Display at 1600 x 1024 on all of the Titanium cards with DVI connectors in our upcoming Titanium Roundup.

The story with ATI is completely different as all DVI equipped ATI cards have their digital outputs driven from the integrated TMDS on all ATI GPUs. ATI found an interesting way of taking advantage of the DVI-I connector by shipping some cards with a DVI-I output and a DVI-I to analog VGA dongle. The dongle essentially takes the 5 analog pins from the DVI-I connector and connects them to a VGA pinout. 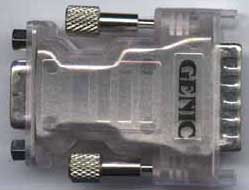 Matrox happens to be the only desktop graphics manufacturer with a dual DVI solution on the market. The Matrox G550 is available with a dual DVI cable however Matrox states that the maximum resolution per DVI monitor is still only 1280 x 1024. Since we could not confirm or refute this statement through our own tests we can only suggest that you approach with caution if you plan on using a higher resolution.