With the Nexus 6 we see a WiFi solution that hasn't been seen before in a mobile device, Broadcom's BCM4356. Announced at CES earlier this year, BCM4356 is a 2x2 802.11ac part with Bluetooth 4.1 support allowing for improved co-existence between Bluetooth and LTE. For reference, the Nexus 5 shipped with BCM4339 which is a 1x1 802.11ac part. To test WiFi performance on the Nexus 6 we used Iperf and Apple's AirPort Extreme router to try and achieve maximum performance. 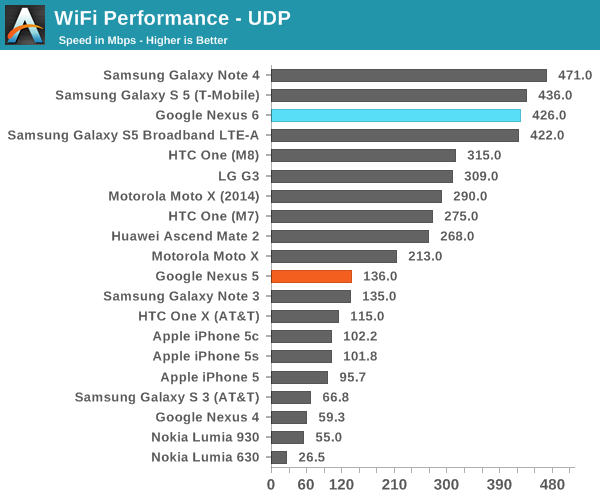 Most devices now use the GNSS solution built into Qualcomm's modem. I was someone who suffered the broken GNSS on the original Galaxy S, and I'm thankful that we've come to a point where every smartphone is now able to competently achieve a quick and accurate GNSS lock. In Airplane mode with no assistance information the Nexus 6 was able to achieve a lock in just under 35 seconds with an additional 5 seconds to bring the accuracy to within 10 feet, although both these times will vary greatly depending on the surrounding environment and weather conditions. With assistance info locks take only a matter of seconds.

To test NAND performance on the Nexus 6 we attempted to use Androbench and Andebench, but both gave results that could not have been accurate and so we are unfortunately unable to test this aspect of the Nexus 6 at this time. Like the new Moto X, the Nexus 6 has Cypress Semiconductor’s CapSense controller. Given that the Nexus 6 has no capacitive buttons, this is likely performing the same impedance-matching antenna tuning as on the Moto X which uses the same type of antenna design. It also has two TFA9890 speaker amplifiers which allows both speakers to be driven at the same time as stereo speakers.