A glimpse into ATI's future?

A little over a year ago ATI completed the acquisition of a company called ArtX. You may have heard us talk about ArtX in the past as they produced an integrated graphics core for an ALi Super7 chipset entitled the Aladdin 7 a couple of years back.

While the chipset was too little, too late for the Super7 market, ArtX had actually caught the eye of Nintendo and was contracted to produce the graphics core for their next-generation gaming console. This little known company ended up being acquired by a much better known player in the industry, ATI.

However at the time of acquisition in mid-2000, the design for the GameCube was complete as were the designs for ATI's next-generation desktop chips. So although the two companies were now under one roof, their technology was not able to mix in the production of the GameCube graphics core. One thing that ATI did very wisely was the agreement to place an ATI sticker on the front of the GameCube. This sort of branding is unbeatable since they're essentially raising a group that will eventually grow to millions, to support the ATI name. When a satisfied GameCube owner goes to buy a new video card, it's more than likely that the ATI name will catch their eye first.

The GameCube motherboard is home to only two chips outside of all the memory chips on the board. The first chip you know of, and that is IBM's Gekko processor. The second chip is the integrated North Bridge, I/O controller, and graphics processor produced by the ArtX team that is now a member of ATI. This chip not only dwarfs Gekko in size, but it also is much more interesting to talk about; this chip is named, Flipper. 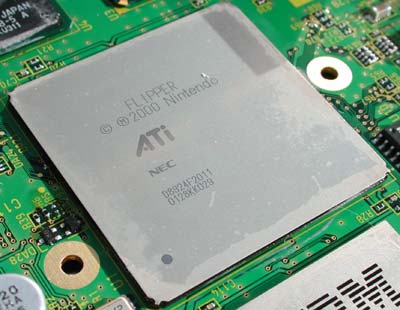 The role of North Bridge is played by Flipper in that it features a 64-bit interface to the Gekko CPU running at 162MHz. The entire Flipper chip runs at 162MHz which lends itself to much lower latency operation since all bus clocks operate in synch with one another. This also means that the graphics core in Flipper runs at 162MHz as well.

The Flipper graphics core is a fairly simple fixed function GPU aided by some very powerful amounts of memory bandwidth, but first onto the architecture of the graphics core. Flipper always operates on 4 pixels at a time using its 4 pixel pipelines; each of those pipelines is capable of applying one texture per pipeline which immediately tips you off that the ArtX design wasn't influenced by ATI at all. Since the Radeon and GeForce2, both ATI and NVIDIA's cores have been able to process a minimum of two textures per pixel in each of their pipelines which came quite in handy since none of today's games are single textured anymore.

The fact that the Flipper's T&L is a fixed function T&L unit is a bit of a disappointment as well but it would have been impossible for ArtX to implement ATI's SmartShader programmable pixel and vertex shaders into their design and still meet Nintendo's strict deadlines. The one thing that is playing to the GameCube's favor is that the Flipper GPU was designed solely with console gaming in mind, and the input that went into the T&L unit was much more closely tied to the developers than some of the earlier T&L units for desktop PC graphics cards. Although it may be better suited for its target use than the earliest T&L units for PCs, there is no skirting the fact that with a fixed function T&L pipeline there are limitations to exactly what game developers will be able to do. After seeing what over two years of fixed function T&L support in games for the PC was like, we'd hope for much more out of developer use of Flipper's GPU.

Anti-aliasing is very important when it comes to console games and it's thus very important that Flipper offer AA support. The core does feature support for a 7-sample multi-sample AA algorithm but it's clear that turning on 7-sample AA isn't exactly the most realistic option. ATI informed us that the number of samples is adjustable and can be set by the developer, but as was the case with Xbox, we did not see any examples of AA being implemented in any of the launch titles.

Based on the operating frequency of the core (162MHz) you can tell that the Flipper graphics core isn't a fill-rate monster, but what it is able to do is portray itself as a very efficient GPU. The efficiency comes from the use of embedded DRAM.