While the Xbox was a PC turned game-console, Nintendo's GameCube was designed as a game console from the ground up. Nintendo's needs for this next-generation console were very clear: the chip would have to be powerful, cheap to manufacture, and run cool enough that it could fit in a very small enclosure. Nintendo ended up contracting IBM to handle the production of the CPUs for the GameCube based on their well-known PowerPC 750CXe processor.

However details on this processor are sketchy at best but the information we've been able to gather points at a relatively unmodified PowerPC 750CXe microprocessor with the addition of close to 40 new instructions (potentially SIMD FP) designed to specifically aid in game performance. Followers of the PowerPC architecture will quickly realize that these additional instructions do not comprise all of the instructions provided by Motorola's AltiVec SIMD instruction set. It is possible that only a subset of AltiVec was implemented into this processor, using instructions heavily geared towards the tasks that it would be handling. 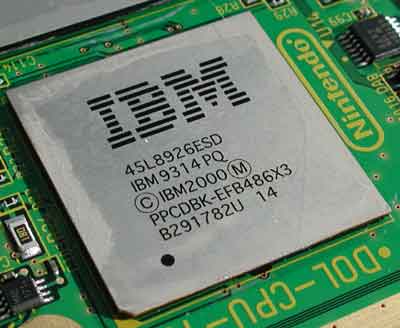 The basics of this PPC 750CXe derivative (codenamed Gekko) are fairly simple; the PowerPC core features a 4-stage basic integer pipeline which is mostly responsible for the very low clock speeds the core is able to achieve. Most important for gaming performance however are more precise floating point calculations and the Gekko's floating point pipeline is 7 stages long. Since the Gekko is a native RISC processor it does not suffer the same fate as its Xbox counterpart in that it doesn't have to spend much time in the fetch/decoding stages of the pipeline. Immediately upon fetching the RISC instructions to be executed, they are dispatched and one clock cycle later, they are ready to be sent to the execution units.

The PowerPC architecture is a 64-bit architecture with a 32-bit subset which in the case of the Gekko processor, is what is used. The CPU supports 32-bit addresses and features two 32-bit Integer ALUs; separate to that is a 64-bit FPU that is capable of working on either 64-bit floats or two 32-bit floats using its thirty two 64-bit FP registers. This abundance of operating registers is mirrored in the 32 General Purpose Registers (GPRs) that the processor has, dwarfing the Xbox's x86-limited offering (8 GPRs).

Although both the Gekko and the Intel CPU used in the Xbox are built upon advanced 0.18-micron processes, the Gekko is held back by its relatively short pipeline limiting it to generally no higher than 500MHz. The Gekko does use Copper interconnects which are superior to their Aluminum counterparts (used in the Xbox CPU for example) in that they more efficiently conduct electricity, but this advantage is still not able to result in a higher clock speed for the CPU. In the case of the GameCube, the CPU is clocked at 485MHz, or 3 times its 162MHz FSB frequency. The benefit of a shorter pipeline is of course, an increased number of instructions that can be processed in those limited number of clocks. However from all of that data that we have seen comparing the PowerPC 750 to even the desktop Intel Celeron processor, it does not seem that the Gekko can compete, performance-wise.

Your experience in the PC hardware world however should have taught you that CPU performance does not matter when it comes to games as long as you are bottlenecked elsewhere in the system, so theoretically Gekko could be more than enough for the GameCube but we have a feeling it's not.

Instead of being a processing powerhouse, Gekko was actually chosen for its physical characteristics. Although it does have a larger on-die L1 & L2 cache than the Xbox CPU (64KB/256KB vs. 32KB/128KB) and is composed of more transistors (over 21 million vs. approximately 9 million for the Xbox CPU), Gekko's die is under 45 mm^2. For comparison, the processor used in the Xbox has a die measuring approximately 100 mm^2.

The Gekko is actually a very cool running CPU, dissipating around 5W at its 485MHz operating frequency. Again, when compared to the Intel CPU used in the Xbox, you're looking at roughly three times more being produced by the X-CPU than by the GameCube's Gekko.

So while isn't as powerful at the Xbox CPU, Gekko's smaller die and cooler operation provide for lower manufacturing costs and a smaller sized console which fit Nintendo's goals perfectly.

Gekko does have more FSB bandwidth at its disposal than the X-CPU, simply because its FSB is running at 162MHz vs. the 133MHz FSB frequency that is within the limits of Intel's AGTL+ spec. This results in a 1.3GB/s connection between Gekko and the North Bridge, which like in the case of the Xbox's nForce-based platform, is integrated into a single chip along with the graphics core.

It's time to meet a close friend of Gekko; we call him Flipper.