In order to really understand the camera of the iPhone 6, we have to first talk about the components that make up the camera system. While we don’t know the exact model number of either the iPhone 5s or iPhone 6 sensors, we do know that both the front and rear cameras are made by Sony. For the most part, it seems that the optical system is largely unchanged from the iPhone 5s to iPhone 6. The focal length and aperture are identical, and both have five plastic lenses. On the sensor side there are some obvious differences such as the addition of phase detection pixels. However, it’s otherwise difficult to say if anything else has changed in this area. There’s also a new ISP on the SoC, which serves to enable features like 240FPS slow motion video.

Based on what we know about the camera, the one highlight feature seems to be PDAF. While we’ve seen it before in phones like the Galaxy S5, we’ve never really talked about how it works. In short, microlenses on the sensor refract incoming light onto the AF detector in pairs, as seen in the photo below. Once this is done, the image produced by each AF sensor is compared for similarities. By finding these similarities, the ISP can know whether the lens is focused at a point short, long, or on the intended subject and command lens movement to focus on the intended subject. In case 1 in the photo, we see a situation where the camera is focused short, so the lens must move in order to properly focus on the subject, which is case 2. Case 3 and 4 show increasingly extreme cases of focusing too far to focus on the subject.

The real question is how it works. While we don't have an ideal test for auto focus and capture latency, we can at least get an idea for best case latency by looking at latency for both cases when viewing a well lit ISO chart, which has extremely high contrast and strong lighting so PDAF should be able to operate. 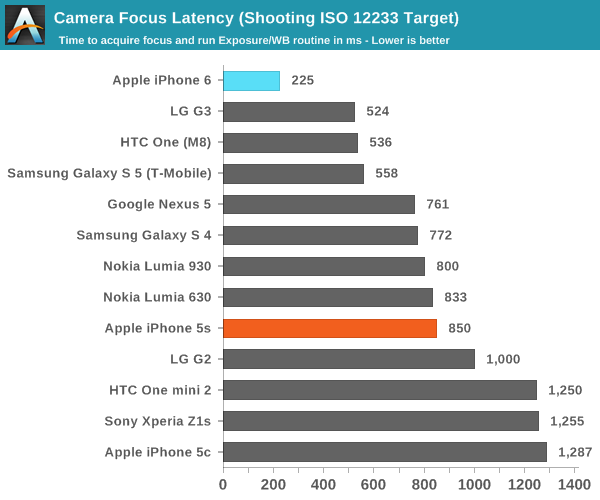 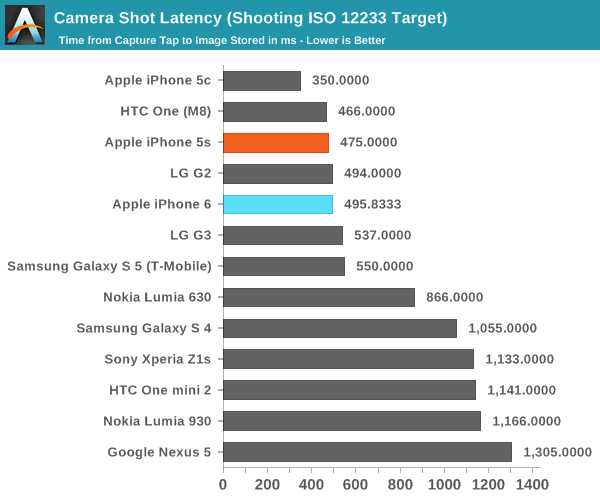 As you can see, it seems that capture latency is mostly unchanged when comparing the two phones but focus latency is dramatically improved in the best case, which is around 200 milliseconds. While the Galaxy S5 does have PDAF, in my experience it was hard to tell if it was any faster than a mostly contrast-based solution like the One M8. With the iPhone 6 the use of PDAF is immediately obvious because in well lit conditions the camera always snaps to focus without ever waiting for the ISP to detect an out of focus condition and run an AF scan. Oddly enough, in all of the manual camera applications that I've tried none of them seem to be able to use continuous auto focus in the preview, which suggests that this isn't exposed in the camera API.

On the UI side, the new camera application isn't a significant departure from what we're used to in iOS but there is one odd UI inconsistency present in the new UI, as in the slow motion video mode tapping the fps option will toggle between 120 and 240 fps but the same isn't true of 1080p60 video, which has to be toggled through the settings application instead of within the camera application.

Otherwise, I'm generally happy with the camera, especially with the new exposure biasing mode which does away with the need to try and get a specific exposure by locking exposure and reframing to get the right photo. While this certainly isn't a new feature the ease of use makes for a better implementation than most. Generally, exposure biasing is hidden in the settings menu so it's a setting that is only selected once and never again. However, Apple's solution will always default to 0 EV and allow for biasing by swiping up to increase exposure and down to reduce it, which means that this solution is fast and easy to do when taking a photo.

Overall, I don't have significant complaints with the camera UI or the general shooting experience. While I'm still looking for an ideal manual camera application I find Apple's mostly all auto solution to be more than sufficient. Of course, the shooting experience alone isn't enough to evaluate a camera so we'll look at image quality next.

While I'm still not quite happy with the state of our camera testing procedures, our current tests can generally give a good relative comparison, so the data we're looking at can still be used to draw some conclusions about the camera being tested. One of the first tests that we'll look at is the ISO chart, which uses increasingly tight line spacing to determine what the maximum resolution of the camera is. 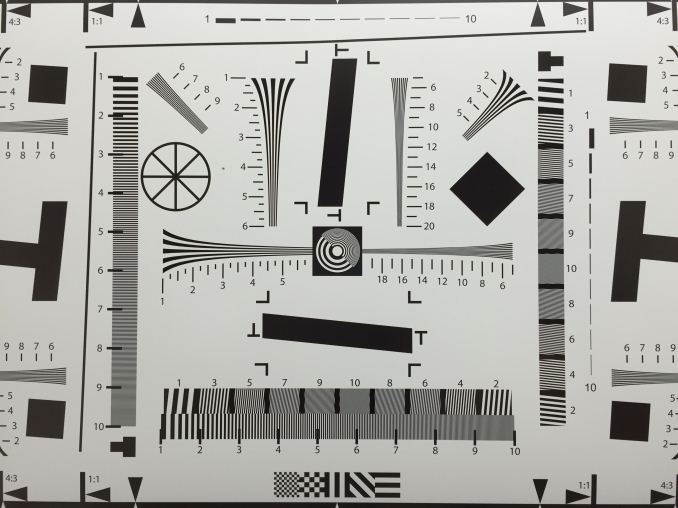 In this test, the iPhone 6 does reasonably well, showing low aliasing until around the 16 or 17 mark, which seems to be about the same as the iPhone 5s. In general, this is one area where the iPhone falls short of the competition, which generally tends towards 1.1 micron pixels and sensor sizes larger than a third of an inch. However, it's definitely a great more detail than what we see on the four megapixel sensor of the One (M7) or One (M8). Given the sensor size constraints that Apple seems to be working with this is a respectable showing. 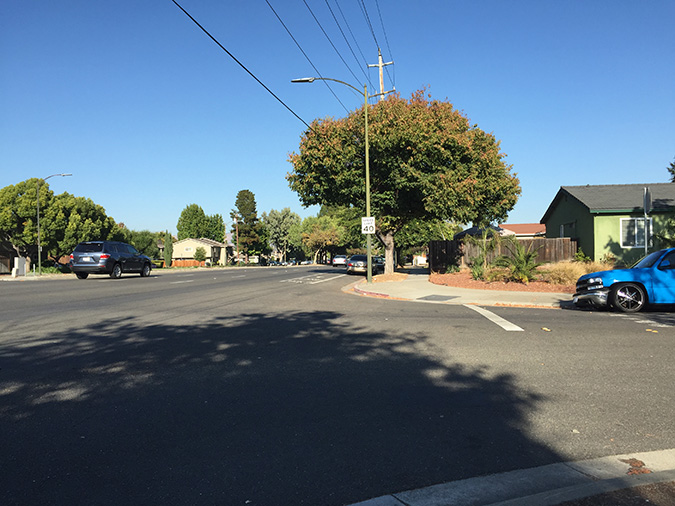 The next scene we'll look at is a daytime landscape shot. For the most part the iPhone 6 does admirably, as noise is well suppressed without noticeable oil painting effects that arise from when noise suppression is too strong and blurs out detail. Dynamic range is also generally quite good as shadowed areas have noticeable detail in this scene. In comparison to the iPhone 5s, while it's relatively hard to see any real differences in detail the noise in areas like the sky and in shadows are noticeably reduced without an obvious decrease in detail. 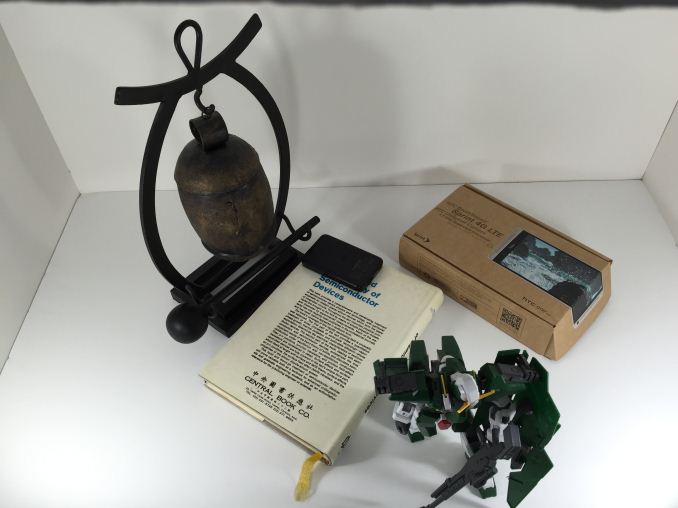 Following along the lines of the landscape shot, I also set up a lightbox scene with a few objects of varying contrasting textures, text, and feature size to get a good idea of what the limitations of the camera are. In this test scene, we actually see some level of improvement in detail when comparing the iPhone 5s to the iPhone 6. This is most obvious when looking closely at the texture of the metal bell. When compared to the Galaxy S5 LTE-A the iPhone 6 does fall behind a bit due to lower resolution and a mildly wider field of view. 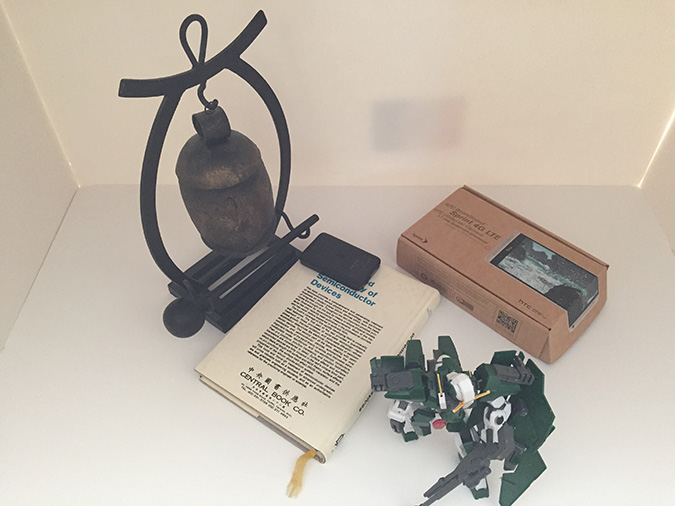 For the next scene, I used the light box and standardized dim lighting in order to provide an example of camera performance between extremely bright and dark scenes. Here, it's relatively difficult to see a difference between the various phones, although with some cameras we're already starting to see a significant amount of detail blurred away in areas like the bell which has a great deal of low contrast detail. There's not too much difference here when comparing the iPhone 6 and 5s, although the 6 does have noticeably lower contrast in these situations. 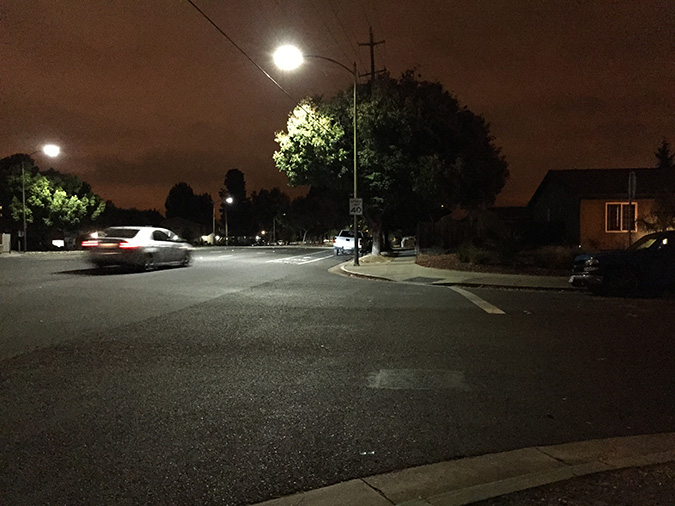 At the extremes of low light photos, we definitely see a notable improvement in the iPhone 6, which can be attributed to the lower ISO. However, for better or worse we don't see a significant difference in exposure which suggests that this sensor likely has improved sensitivity despite identical pixel size. While we have no way of knowing the exact sensor, it's logical to conclude that the iPhone 6 is using a CMOS sensor process similar to the IMX240 in the GS5 LTE-A at a larger pixel pitch for better sensitivity. What's really incredible about this test photo is that the iPhone 6 manages to deliver an output close to what we see in the iPhone 6 Plus at four times the ISO/sensor gain. 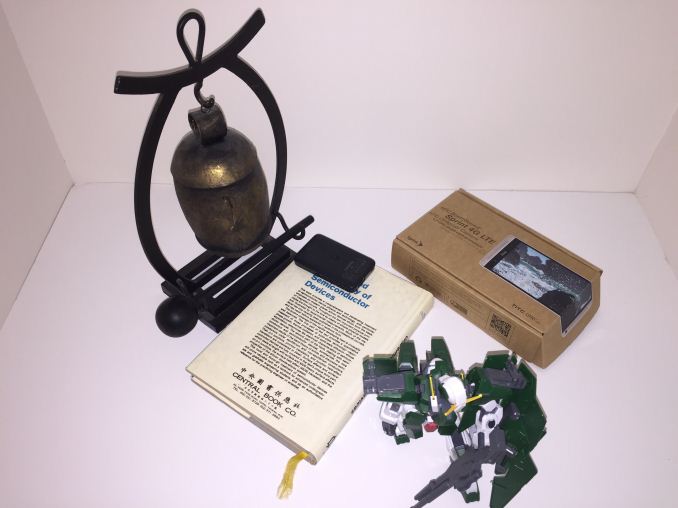 The next two test cases are less about the camera itself and more about how well the OEM has integrated software and hardware. The first test we'll go over is the LED flash test in the lightbox scene that was previously used. While LED flash is generally a rather poor solution for low light photos, it's still important to test as there are some situations where it's absolutely necessary. In this case, Apple has done a great job of selecting an appropriate brightness level to evenly illuminate the scene and provided enough light to keep noise to a minimum, but for some reason there's a pink/red tint to the entire scene. This is one area where the iPhone 5s seems to provide more even color rendering as there is no such tint. 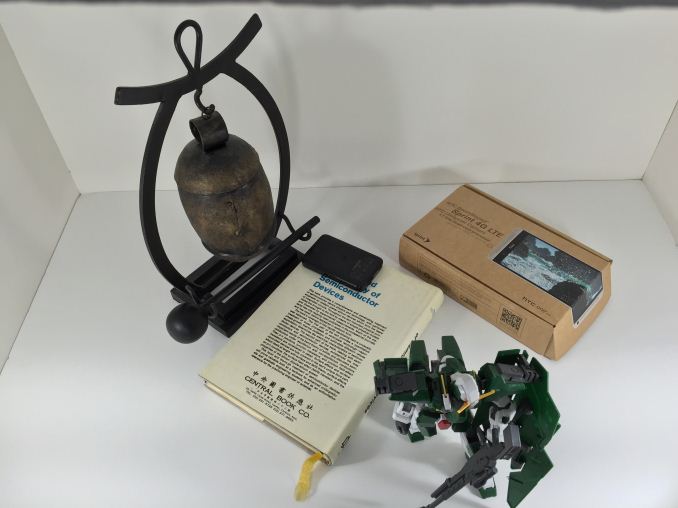 In the HDR test, there's a noticeable improvement in detail and dynamic range from the iPhone 5s to the iPhone 6. Key areas of note include the Media Link HD box, which has noticeably clearer text and there's also significantly more detail on the bell. Judging by the general improvements to detail in closer shots, it may be that these effects are either too subtle to see in landscapes or simply smudged away by noise reduction. There's relatively little to criticize here, as Apple seems to be effectively merging multiple exposures without obvious halos or similar effects that make HDR almost impossible to use in most circumstances.

Overall, the iPhone 6's camera represents a solid improvement over the previous generation, with less noise, more detail in some circumstances, better HDR, and improved low light performance. While it isn't a huge leap ahead, it's definitely more than one might expect. The improvements are subtle though, as there are no fundamental changes to the optics or sensor.