Stepping away from the graphics heart of Maxwell 2 for a bit, NVIDIA has been busy not just optimizing their architecture and adding graphical features to their hardware, but they have also added some new display-oriented features to the Maxwell 2 architecture. This has resulted in an upgrade of their video encode capabilities, their display I/O capabilities, and even their ability to drive virtual reality headsets such as the Oculus Rift.

We’ll start first with display I/O. HDMI users will be happy to see that as of GM204, NVIDIA now supports HDMI 2.0, which will allow NVIDIA to drive future 4K@60Hz displays over HDMI and without compromise. HDMI 2.0 for its part is the 4K-focused upgrade of the HDMI standard, and brings with it support for the much higher data rate (through a greatly increased clockspeed of 600MHz) necessary to drive 4K displays at 60Hz, while also introducing features such as new subsampling patterns like YCbCr 4:2:0, and official support for wide aspect ratio (21:9 displays).

It should be noted that this is full HDMI 2.0 support, and as a result it notably differs from the earlier support that NVIDIA patched into Kepler and Maxwell 1 through drivers. Whereas NVIDIA’s earlier update was to allow these products to drive a 4K@60Hz display using 4:2:0 subsampling to stay within the bandwidth limitations of HDMI 1.4, Maxwell 2 implements the bandwidth improvements necessary to support 4K@60Hz with full resolution 4:4:4 and RGB color spaces.

Meanwhile alongside the upgrade to HDMI 2.0, NVIDIA has also made one other change to their display controllers that should be of interest to multi-monitor users. With Maxwell 2, a single display controller can now drive multiple identical MST substreams on its own, rather than requiring a different display controller for each stream. This feature will be especially useful for driving tiled monitors such as many of today’s 4K monitors, which are internally a pair of identical displays driven using MST. By being able to drive both tiles off of a single display controller, NVIDIA can make better use of their 4 display controllers, allowing them to drive up to 4 such displays off of a Maxwell 2 GPU as opposed to the 2 display limitation that is inherent to Kepler GPUs. For the consumer cards we’re seeing today, the most common display I/O configuration will include 3 DisplayPorts, allowing these specific cards to drive up to 3 such 4K monitors.

In Maxwell 1, NVIDIA introduced updated versions of both their video encode and decode engines. On the decode side the new VP6 decoder increased the performance of the decode block to allow NVIDIA to decode H.264 up to 4K@60Hz (Level 5.2), something the older VP5 decoder was not fast enough to do. Meanwhile the Maxwell 1 NVEC video encoder received a similar speed boost, roughly doubling its performance compared to Kepler.

Surprisingly, even after only 7 months since the first Maxwell 1 GPUs, NVIDIA has once again overhauled NVENC, and this time more significantly. The Maxwell 2 version of NVENC further builds off of the Maxwell 1 NVENC by adding full support for HEVC (H.265) encoding. Like HDMI 2.0 support, this marks the very first PC GPU we’ve seen integrate support for this more advanced codec.

At this point there’s really not much that can be done with Maxwell 2’s HEVC encoder – it’s not exposed in anything or used in NVIDIA’s current tools – but NVIDIA is laying the groundwork for the future once HEVC support becomes more commonplace in other hardware and software. NVIDIA envisions their killer app for HEVC support to be game streaming, where the higher efficiency of HEVC will improve the image quality of game streams due to the limited bandwidth available in most streaming scenarios. In the long run we would expect NVIDIA to utilize HEVC for GameStream for the home, and at the server level support for HEVC in the next generation of GRID cards will be a major boon to NVIDIA’s GRID streaming efforts.

Meanwhile where the enhanced version of NVENC is going to be applicable today is in ShadowPlay. While still recording in H.264, the higher performance of NVENC means that NVIDIA can now offer recording at higher resolutions and bitrates. With GM204 NVIDIA’s hardware can now record at 1440p60 and 4Kp60 at bitrates up to 130Mbps, as opposed to the 1080p60 @ 50Mbps limit for their Kepler cards. 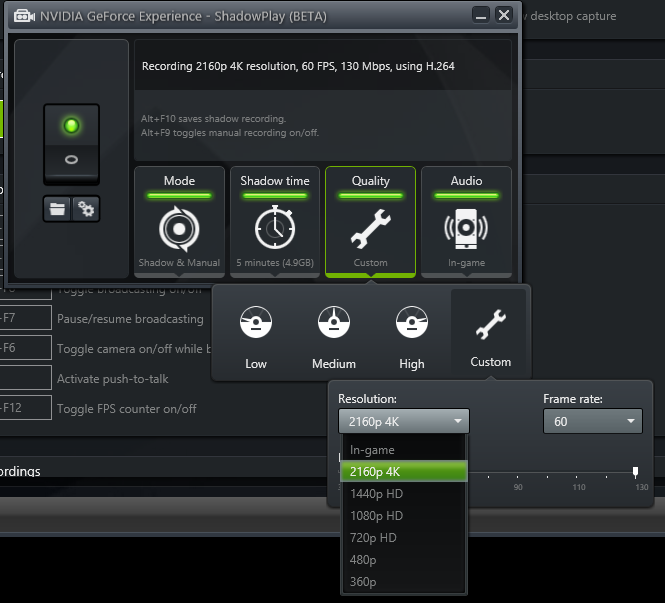 Finally, and somewhat paradoxically, Maxwell 2 inherits Kepler and Maxwell 1’s hybrid HEVC decode support. First introduced with Maxwell 1 and backported to Kepler, NVIDIA’s hybrid HEVC decode support enables HEVC decoding on these parts by using a combination of software (shader) and hardware decoding, leveraging the reusable portions of the H.264 decode block to offload to fixed function hardware what elements it can, and processing the rest in software.

A hybrid decode process is not going to be as power efficient as a full fixed function decoder, but handled in the GPU it will be much faster and more power efficient than handling the process in software. The fact that Maxwell 2 gets a hardware HEVC encoder but a hybrid HEVC decoder is in turn a result of the realities of hardware development for NVIDIA; you can’t hybridize encoding, and the hybrid decode process is good enough for now. So NVIDIA spent their efforts on getting hardware HEVC encoding going first, and at this point we’d expect to see full hardware HEVC decoding show up in a future generation of hardware (and we’d note that NVIDIA can swap VP blocks at will, so it doesn’t necessarily have to be Pascal). 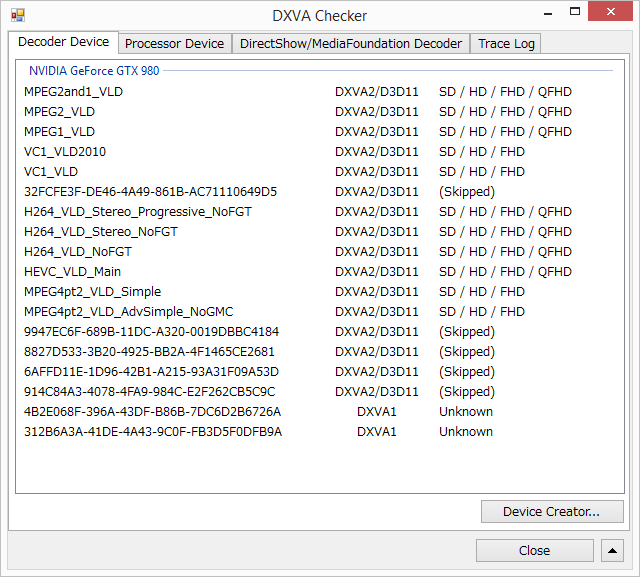 Our final item on the list of NVIDIA’s new display features is a family of technologies NVIDIA is calling VR Direct. 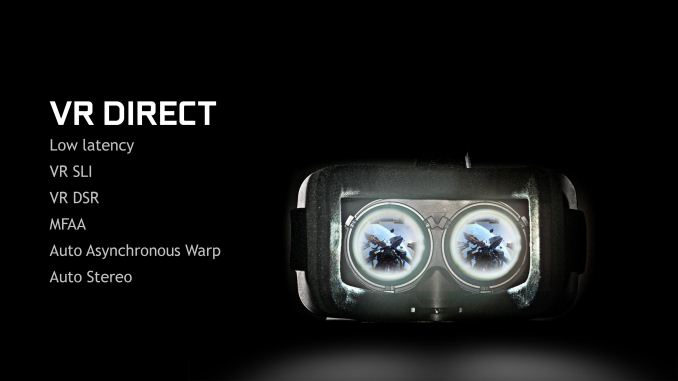 VR Direct in a nutshell is a collection of technologies and software enhancements designed to improve the experience and performance of virtual reality headsets such as the Oculus Rift. From a practical perspective NVIDIA already has some experience in stereoscopic rendering through 3D Vision, and from a marketing perspective the high resource requirements of VR would be good for encouraging GeForce sales, so NVIDIA will be heavily investing into the development of VR technologies through VR Direct.

From a technical perspective the biggest thing that Oculus and other VR headset makers need from GPU manufacturers and the other companies involved in the PC ecosystem is methods of reducing the latency/input lag between a user’s input and when a finished frame becomes visible on a headset. While some latency is inevitable – it takes time to gather data and render a frame – the greater the latency the greater the disconnect will be between the user and the rendered world. In more extreme cases this can make the simulation unusable, or even trigger motion sickness in individuals whose minds can’t handle the disorientation from the latency. As a result several of NVIDIA’s features are focused on reducing latency in some manner.

First and foremost, for VR headsets NVIDIA has implemented a low latency mode that minimizes the amount of time a frame spends being prepared by the drivers and OS. In an average case this low latency mode eliminates 10ms of OS-induced latency from the rendering pipeline, and this is the purest optimization of the bunch. 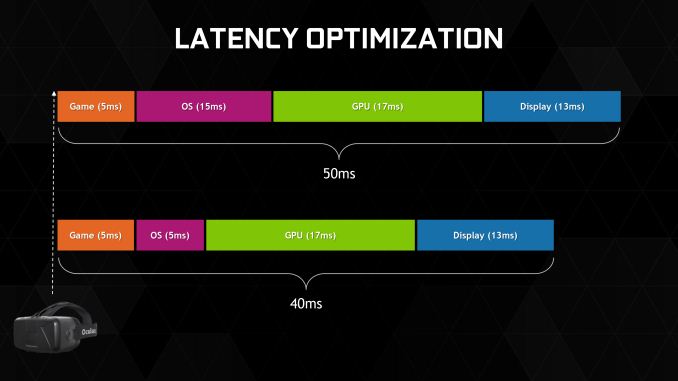 Meanwhile at the more extreme end of the feature spectrum, NVIDIA will be supporting a feature called asynchronous warp. This feature, known by Oculus developers as time warp, involves rendering a frame and then at the last possible moment updating the head tracking information from the user. After that information is acquired, the nearly finished frame then has a post-process warping applied to it to take into account head movement since the frame was initially submitted, with the ultimate goal of this warping being the simulation of what the frame should look like had it been rendered instantaneously.

From a quality perspective asynchronous warp stands to be a bit of a kludge, but it is the single most potent latency improvement among the VR Direct feature set. By modifying the frame to account for the user’s head position as late as is possible, it reduces the perceived latency by as much as 25ms. 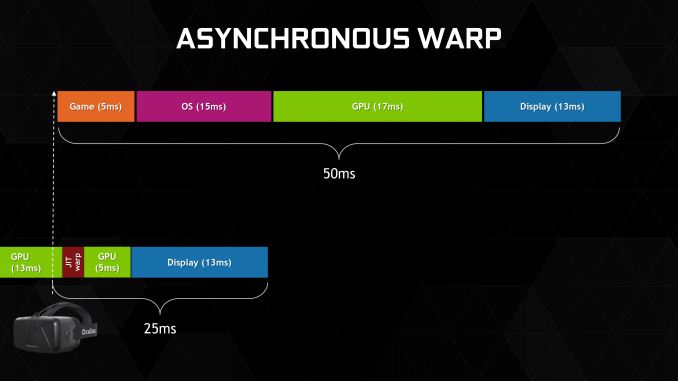 Lastly, NVIDIA’s fourth and final latency optimization for VR Direct is VR SLI. And this feature is simple enough: rather than using alternate frame rendering (AFR) to render both eyes at once on one GPU, split up the workload such that each GPU is working on each eye simultaneously. AFR, though highly compatible with traditional monoscopic rendering, introduces additional latency that would be undesirable for VR. By rendering each eye separately on each GPU, NVIDIA is able to apply the performance benefits of SLI to VR without creating additional latency. Given the very high performance and low latencies required for VR, it’s currently expected that most high-end games supporting VR headsets will need SLI to achieve their necessary performance, so being able to use SLI without a latency penalty will be an important part of making VR gaming commercially viable.

On a side note, for the sake of clarity we do want to point out that many of NVIDIA’s latency optimizations come from the best practices suggestions of Oculus VR. Asynchronous warp and OS level latency optimizations for example are features that Oculus VR is suggesting for hardware developers and/or pursuing themselves. So while these features are very useful to have on GeForce hardware, they are not necessarily all ideas that NVIDIA has come up with or technologies that are limited to NVIDIA hardware (or even the Maxwell 2 architecture).

Moving on, other than NVIDIA’s latency reduction technologies the VR Direct feature set will also include some feature improvements designed to improve the quality and usability of VR. NVIDIA’s Dynamic Super Resolution (DSR) technology will be available to VR, and given the physical limits on pixel density in today’s OLED panels it will be an important tool in reducing perceptible aliasing. NVIDIA will also be extending VR support to GeForce Experience at a future time, simplifying the configuration of VR-enabled games. For VR on GeForce Experience NVIDIA wants to go beyond just graphical settings and also auto-configure inputs as well, handling remapping of inputs to head/body tracking for the user automatically.

Ultimately at this point VR Direct is more of a forward looking technology than it is something applicable today – the first consumer Oculus Rift hasn’t even been announced, let alone shipped – but by focusing on VR early NVIDIA is hoping to improve the speed and ease of VR development, and have the underpinnings in place once consumer VR gear becomes readily available.