The first thing we have to figure out is whether Quincunx should be compared to ATI's quality or performance 2X AA algorithm. To do this we've taken the same shot from before and now captured it on a GeForce3 Ti 500 as well. 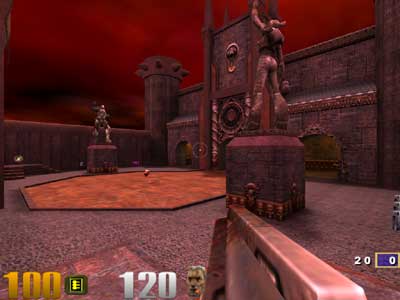 The first thing you'll notice is that the sky looks a lot better on the GeForce3 than on the Radeon 8500. A similar problem existed with GeForce cards not too long ago and the problem ended up being related to texture compression support in the drivers. Turning off texture compression would fix the problem but it'd kill performance, obviously leaving the task on ATI's shoulders of implementing a fix into their drivers.

The blotchy sky of the Radeon 8500

A smooth vision of the sky with the GeForce3 Ti 500

With that out of the way, now it's time to look at how the anti-aliasing techniques compare. For starters we suggest you read our quick description of the benefits of ATI's SMOOTHVISION from our original Radeon 8500 preview.

From a quality standpoint, the quincunx algorithm appears to offer equal or slightly better anti-aliasing than ATI's 2X performance mode but also with significant blurring. ATI's 2X quality mode is untouched by quincunx.