Prior to getting into the performance evaluation, we will take a look at the special aspects and compare the specifications of the ten drives being considered today.

The Red Pro is meant for 8-16 bay SMB / SME rackmount units. Compared to the WD Red, it has better performance, thanks to its 7200 RPM rotational speed. While the WD Red has utilized 1 TB and 1.2 TB / platter configurations, the Red Pro units have 600 GB and 800 GB platters for the 2 / 3 TB versions and the 4 TB version respectively. The lower areal density platters have been in production for quite some time, allowing Western Digital to use a more mature configuration for the Red Pro parts. Like the enterprise drives, the Red Pro comes with hardware-assisted vibration compensation, undergoes extended thermal burn-in testing and carries a 5-year warranty. 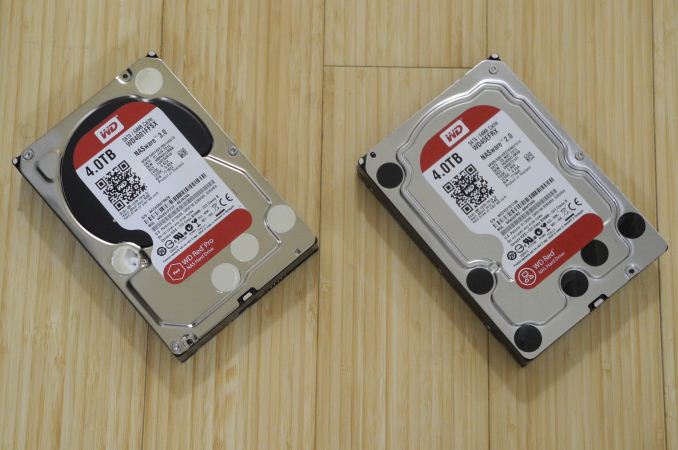 The 4 TB WD Red that we evaluated for this piece is the same as the one that we used in last year's roundup, i.e, the NASware 2.0 version and not the NASware 3.0 version. Even though the WD Reds initially targeted 1-5 bay systems, NASware 3.0 updates the vibration handling mechanism (firmware / calibration) to enable usage in 1-8 bay units. Despite the firmware not being upgradable for older models, WD is honouring warranties even if the NASware 2.0 drives are used in 6-8 bay units. Other aspects of the WD Red models have already been touched upon in our previous reviews.

The Constellation ES.3 lineup is last year's enterprise play (sixth-generation) from Seagate in this market space. It targets applications where capacity, performance and durability under heavy workloads are primary considerations. The drives have a standard 7200 RPM spindle speed, but differ from other units by having a 128 MB multi-segmented cache on-board (64 MB is the standard nowadays). All models are 512N (i.e, native 512 bytes per sector, enabling usage without performance loss for legacy applications). 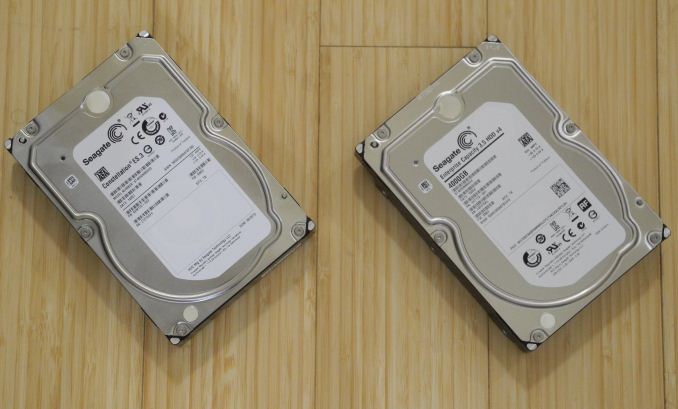 The Enterprise Capacity 3.5" HDD features Seagate's eighth generation drive technology and retains the 128 MB cache of its predecessor. The main difference is that there are no 512N models (either 4K native for the 6 TB model, and 512 emulated for the others). Seagate happens to be the first to use 1 TB platters for its enterprise drives, and this has enabled the Enterprise Capacity lineup to include 6 TB variants. For this review, we managed to get hold of the 4 TB version. On the basis of paper specifications, it looks to be a very good alternative to the WD Red Pro.

The NAS HDD lineup goes head-to-head against the WD Red. The slightly higher spindle speeds (5900 RPM vs. 5400 RPM) tends to give it the performance advantage at the cost a slight power consumption penalty. Seagate implements the NAS-specific firmware features as part of the NASworks package. We have looked into various features of the NAS HDD lineup in our previous roundup. 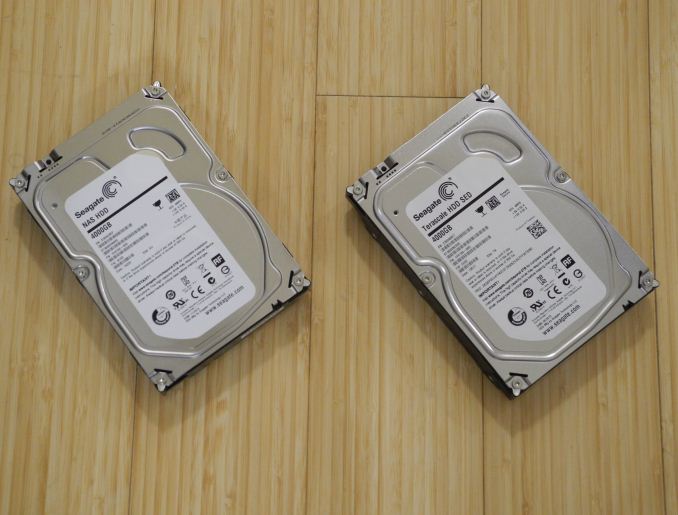 Seagate also supplied us the Terascale drives for this roundup, since we had the WD Se in our previous roundup. The Terascale (previously Constellation CS) goes head-to-head against the WD Se in all departments - it is meant for applications where scalability / capacity is a primary factor, followed by low power consumption and cost. Both 5900 and 7200 RPM versions are available, but our review units belonged to the former category and came with the Instant Secure Erase feature. Unlike the other Seagate enterprise drives in our review samples, this one comes with 64 MB of cache. Seagate claims lowest power consumption in the enterprise drive category for the Terascale drives.

The Western Digital Re is meant to go head-to-head with the Seagate Constellation ES.3 and Enterprise Capacity 3.5" HDD v4. The application areas are the same - enterprise applications where performance, reliability and durability under heavy workloads are primary requirements. The Re drives are the highest-performing SATA drives from Western Digital. The Xe drives are a class above the Re, but they are available only in capacities of up to 900 GB and come with a SAS interface only. We have been using Re drives in all our NAS reviews so far. 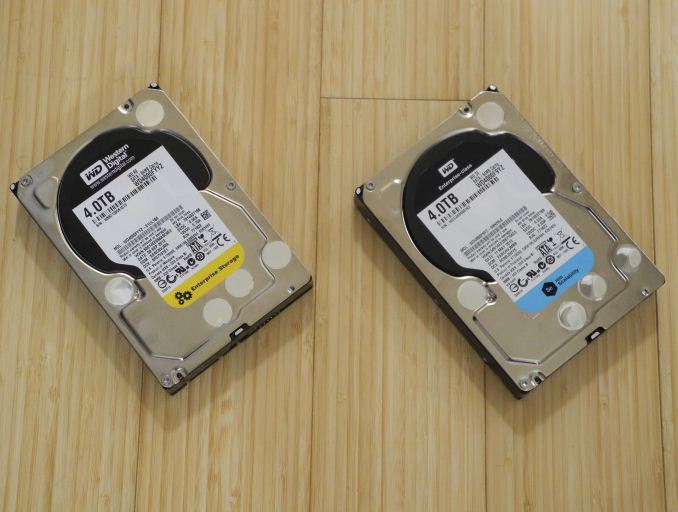 The Se drives come from WD's Datacenter Storage Business Unit and meant for applications where scalable storage (i.e, reliable storage which doesn't cost an arm and a leg for scenarios where capacity, rather than performance, is of primary importance). WD uses them in their own datacenter. Like other enterprise drives, they come with a self-encryption option and carry longer warranties. When compared to WD Re, the difference comes in the URE (unrecoverable error rates), MTBF ratings and suggested workloads. Further details can be seen in our launch coverage of the WD Se.

The MG03ACA400 is Toshiba's highest capacity nearline storage device targeting enterprise applications. The specifications are standard - a 7200 RPM drive with a 64 MB buffer. Toshiba makes it clear that the drives target entry-level servers, storage arrays and RAID systems - There is no emphasis on extreme performance, so it is only fair to expect it to slot with the WD Se and Seagate Terascale drives rather than the Re and Enterprise Capacity ones. The street price (as of the time of this article going live) is similar to that of the Terascale, and this only reinforces our perception. 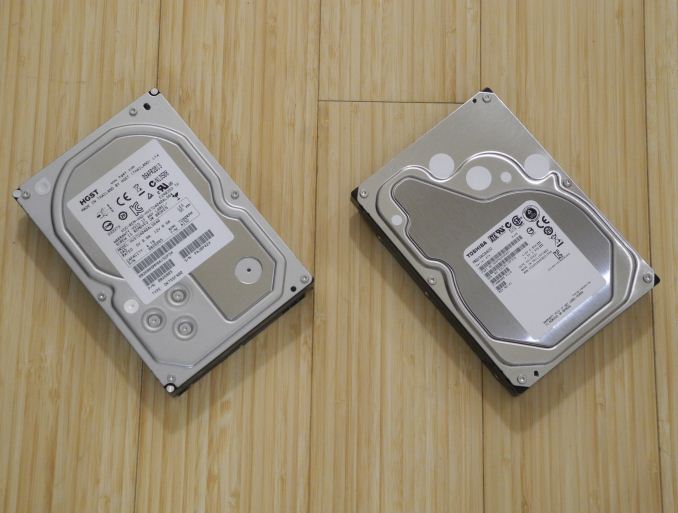 The HGST Ultrastar 7K4000 is the odd-one out in our sample set today. We had requested HGST for the SATA version of the 7K4000, as that goes head-to-head with the Re, Constellation ES.3 and the Enterprise Capacity drives, but they only had the SAS interface version available for review sampling. The standout aspect of the Ultrastar lineup is the 2.0 million hours MTBF rating. Comparing SATA and SAS drives are like comparing apples and oranges, but, at least, we have the same 7200 RPM spindle speed and 64 MB buffer like most of the other drives. As mentioned in the previous section, we are only going to look at the RAID-5 performance benchmark numbers for this drive in today's review.