The Lumia 630 is the first phone sold with Windows Phone 8.1. Unlike Android, OEMs can’t customize the actual user experience, so I’ll refer you to Anand’s Windows Phone 8.1 review for the whole story here. What OEMs can do though is add to the user experience with apps including custom camera launchers. This is also the first Lumia for sale with the “Cyan” firmware update, so let’s go through some of what this gives you as well as the Lumia apps. 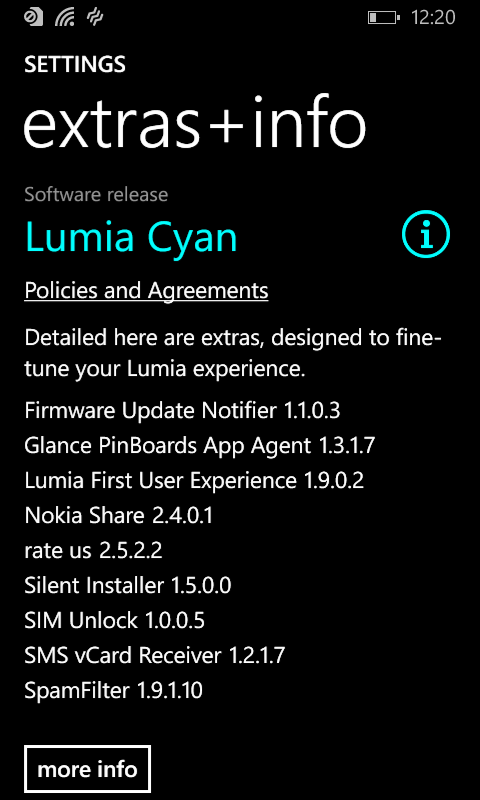 I’ve already alluded to this in the display section, but the Lumia 630 is the first Lumia to offer a brightness slider, and in this case, three levels due to the lack of an ambient light sensor. The three sliders for low, medium, and high brightness have a slightly different scale, so maxing all three will still give a slightly different maximum brightness. It’s a big improvement over the previous choices of low, medium, high, and auto. In the same settings page, you can also adjust the display saturation and hue if it would so please you. 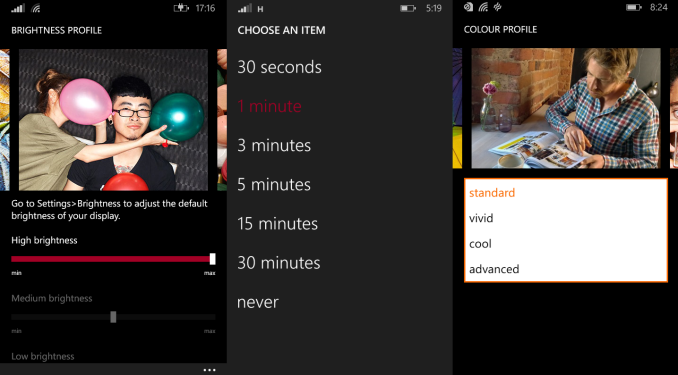 Being a Lumia, you also get access to the large number of Nokia apps which are generally quite good. Nokia also actively courted some developers, giving earlier access to the apps on Nokia devices. With the 630, you have access to all of these (assuming they don’t require 1 GB of memory of course) and some of the highlights I’ll break out below.

When Microsoft acquired Nokia’s smartphone business, the one thing they weren’t able to purchase outright was the HERE branded navigation information. They do retain rights to access it though, and HERE Maps, HERE Transit and HERE Drive+ are available out of the box on the Lumia 630. All are excellent apps with their own slant on how to display the information depending on the usage model. They also offer offline maps which is a bonus for anyone travelling and wanting to avoid roaming data costs but still have access to quality navigation.

Another app from Nokia is App Folder, which does exactly as you’d think. You can add multiple apps and settings to each folder, and then pin them to your home screen. Before Windows Phone 8.1 I used App Folder for quick access to certain settings such as Bluetooth, but now with the action center I find I don’t use it as much. Still, it adds a feature that’s currently missing from the OS and it works great.

The last Nokia app I’ll discuss is a rather unique one called Device Hub. Device Hub simply scans your network for all of the devices on it, and offers suggestions on apps to connect to each device. As an example, if it detects an Xbox One on your network, it will offer up SmartGlass. If it finds a device that you don’t have any installed apps for, it will display a list of options you can use with that device. When it found my A/V Receiver on my LAN, it recommended several DLNA apps. I think it’s a neat app, but my only issue with it is that it’s tucked away under Settings, rather than being an app available in the app list. 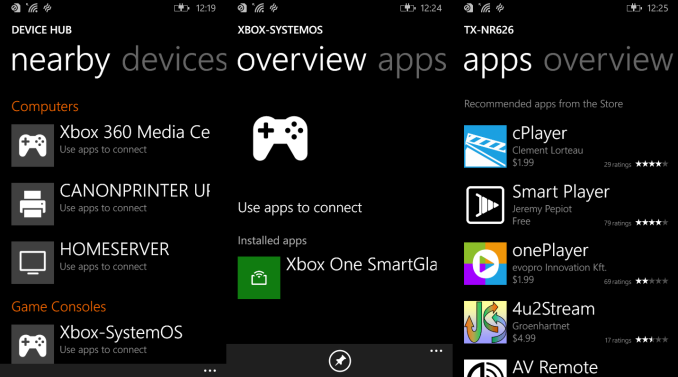 New to the platform is an integrated pedometer, and Nokia branded it SensorCore. It’s not the first smartphone to include such a function, but it’s the first Windows Phone with one built in. There is an API to access the pedometer, but for now the only app which can access your step count is the Microsoft Health and Fitness app. As an app, it follows exactly in the tradition of the once Bing branded apps for Windows Phone, and offers a clean, easy to use interface. 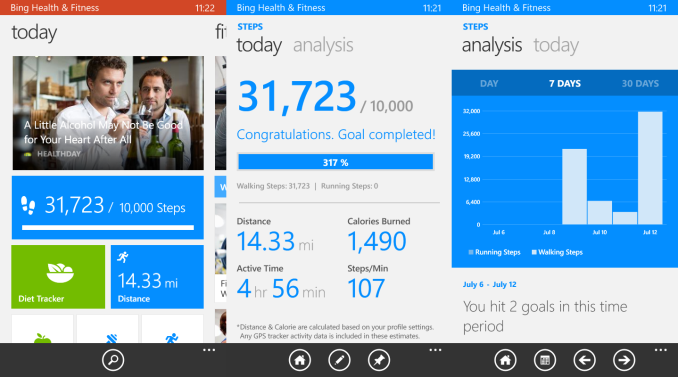 Testing the accuracy of a pedometer isn’t easy, unless you want to actually count your steps for a day. I lost count quickly, so instead I’m comparing it to a FitBit One, which is one of the more popular health and fitness wearables.

I’m not sure if the Lumia was under-reporting steps, or if the FitBit over-reports steps, or if it’s a combination of both, but at no time did the two devices ever end up even close to the same count at the end of any day. My feeling is the FitBit easily falls prey to certain movements which skew the numbers high. Driving seems to really send mine to the moon for instance. On a single day, the FitBit accounted for 9470 steps while the Lumia reported only 6500. I was in the car for around an hour that day, so the Lumia number is likely more accurate. Perhaps if I get another device I can test, I can use three, and hopefully two of them will be somewhat close and we can determine a winner.

There have been a number of smartphones come on the market in the last while with a built in pedometer, so it is nice to see the Lumia 630 include one even in a budget device. Whether or not it gets used is up to the individual buyer, but at least they have that option.