By now, the Snapdragon 801 is mostly well-understood. It has four Krait 400 cores at either 2.26 or 2.45 GHz, an Adreno 330 at 578 MHz, a faster ISP, DSDA support, and higher clocks on the memory interface, along with support for eMMC 5.0 for faster NAND speed. However, OEM design choices can have significant effects on the relative performance of a device. For example, the Galaxy S5 trailed behind the HTC One (M8) despite a faster SoC due to worse thermal dissipation. This was because water resistance necessitated a new design that effectively encased the SoC in a polycarbonate cage, trapping heat in. The LG G3 has the same SoC and same build materials as the Galaxy S5, but the midframe is magnesium, not polycarbonate. This means that peak performance can be higher than the Galaxy S5. 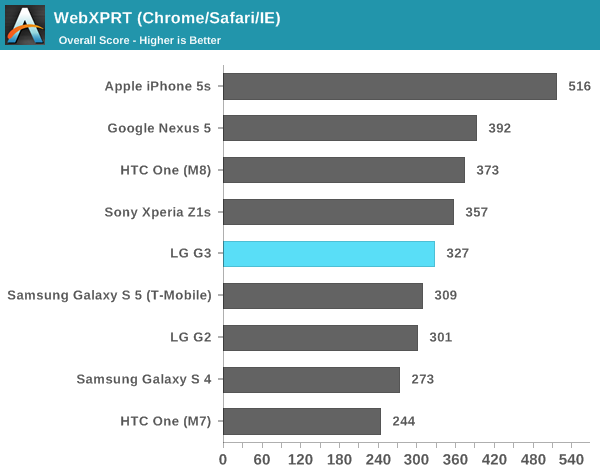 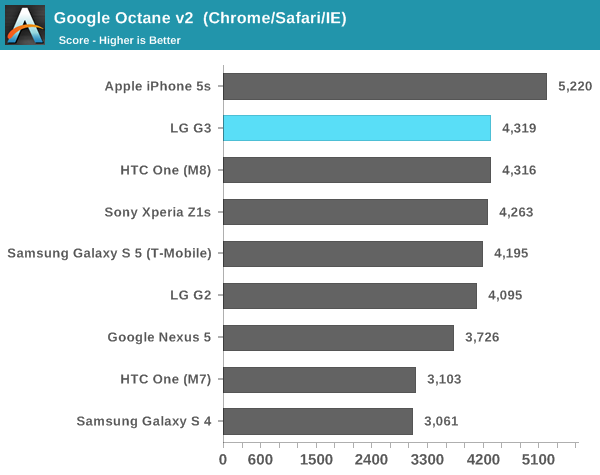 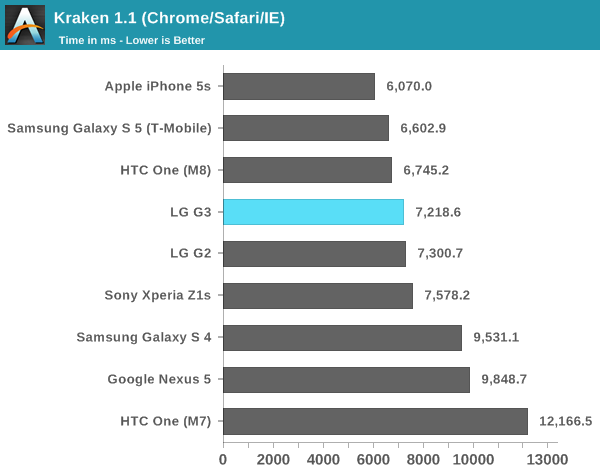 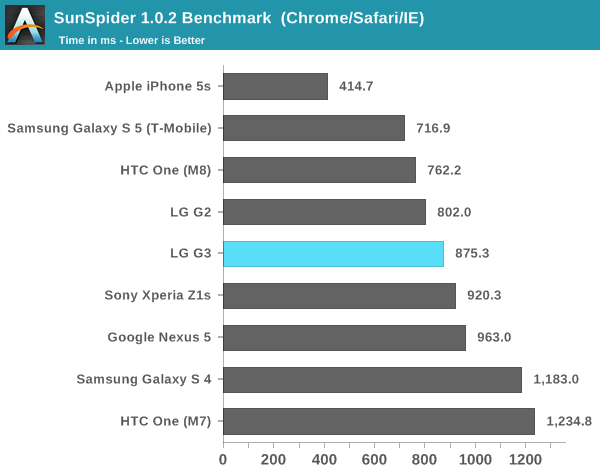 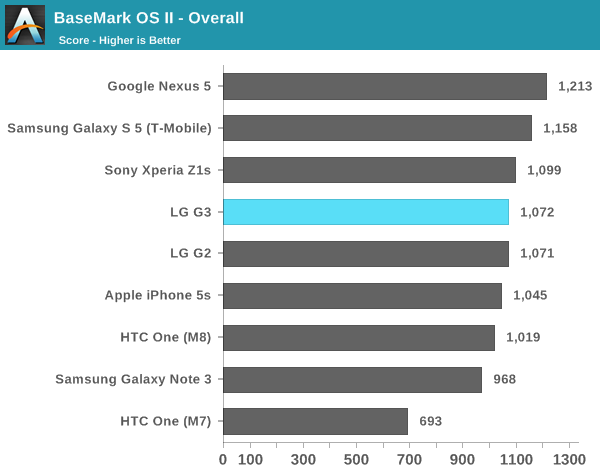 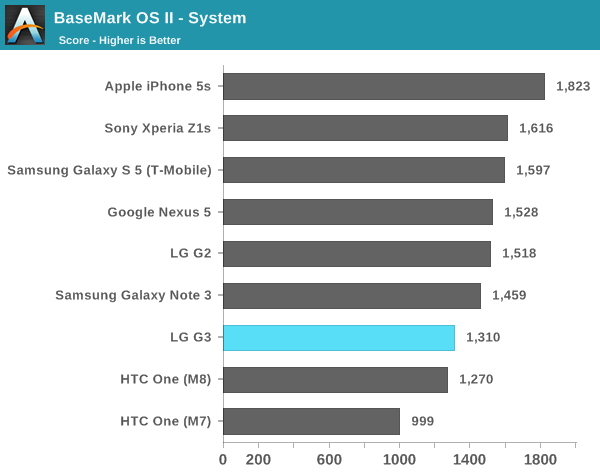 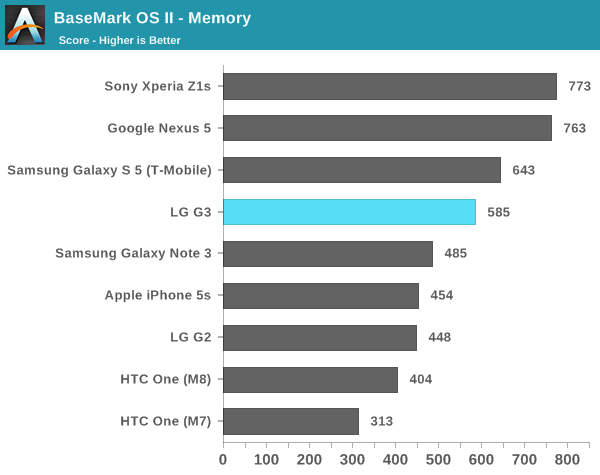 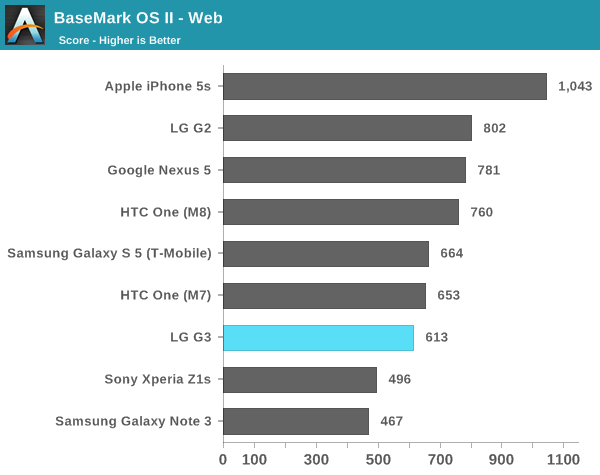 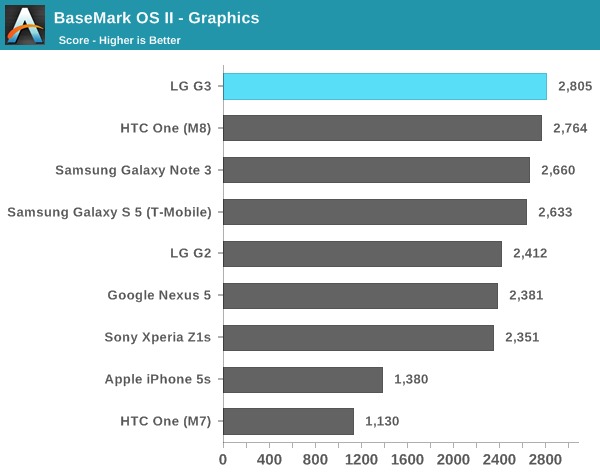 Relatively speaking, there's not much in the way of interesting things to talk about here, despite the new configuration. The G3 seems to trail the other S801 devices in web performance but it seems to depend upon the benchmark. This seems to be partially because of the G3's willingness to throttle, or because of the display's heat output. Either way, the trend is clear because of how often the display brightness is capped to 90 or 95 percent of the maximum to cool off the phone. When this isn't an issue though, the short benchmarks tend to show the faster performance of the G3.

While the state of CPU benchmarking is heavily subject to difference in the performance of the web browser, things are a bit better in the GPU side. All Snapdragon 801 SoCs have the same GPU clocks, so this means that it'll be much easier to examine throttling behavior and reduce variability due to confounding factors. 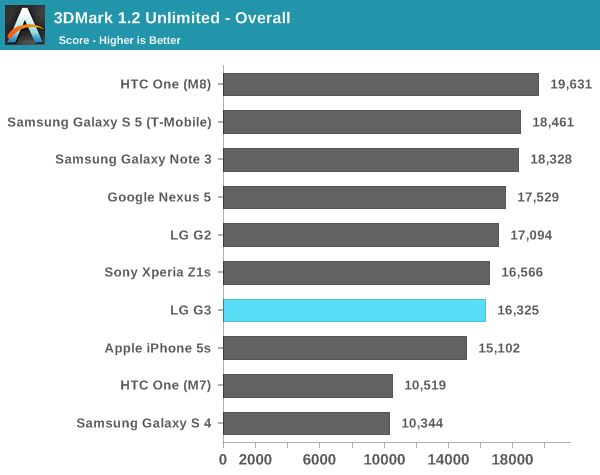 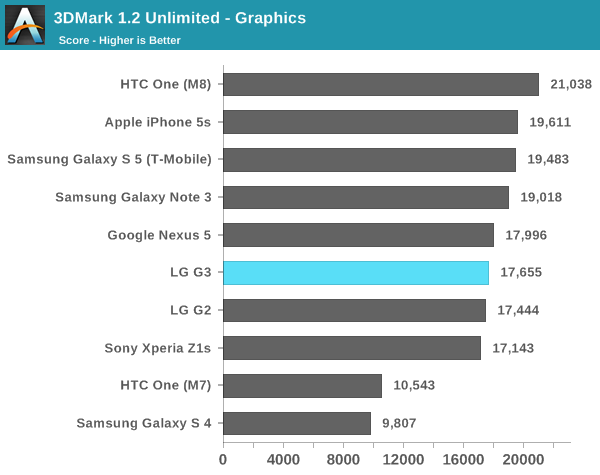 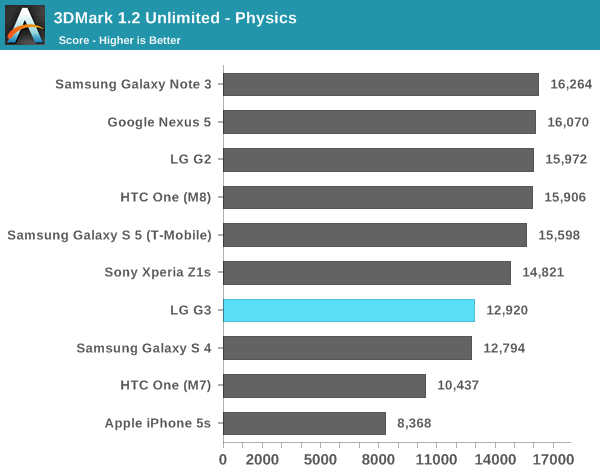 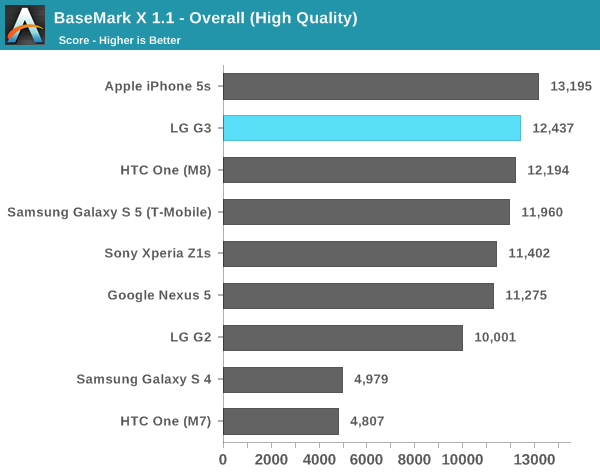 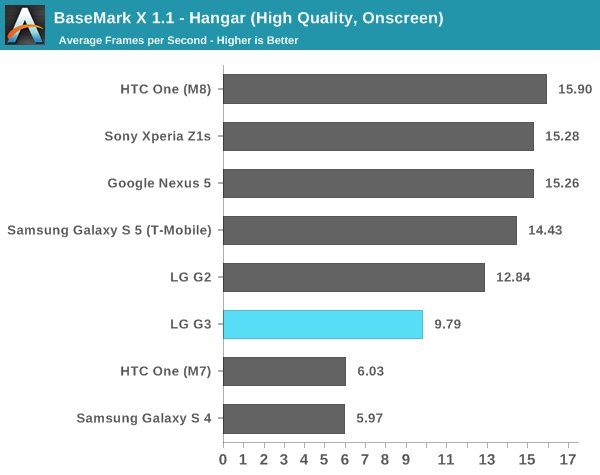 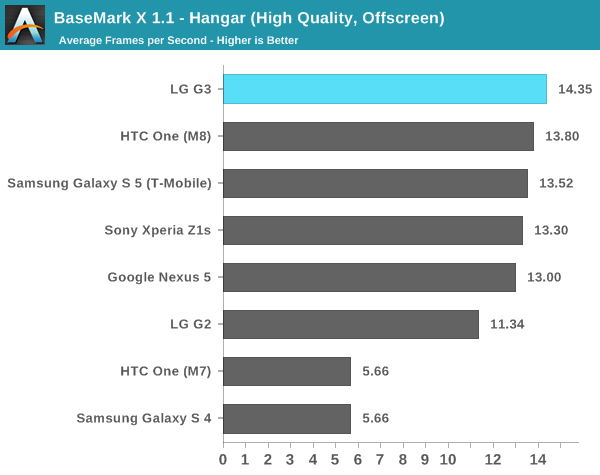 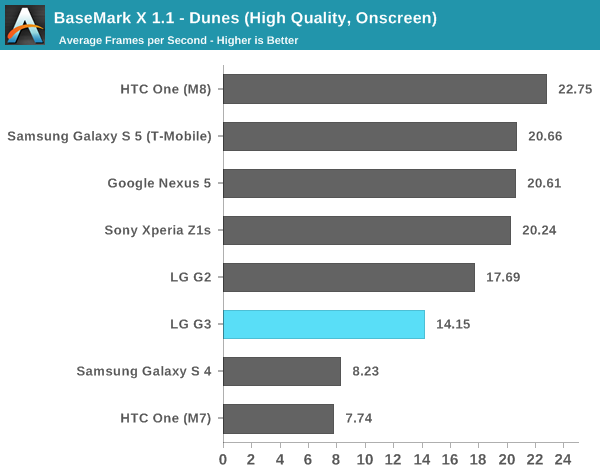 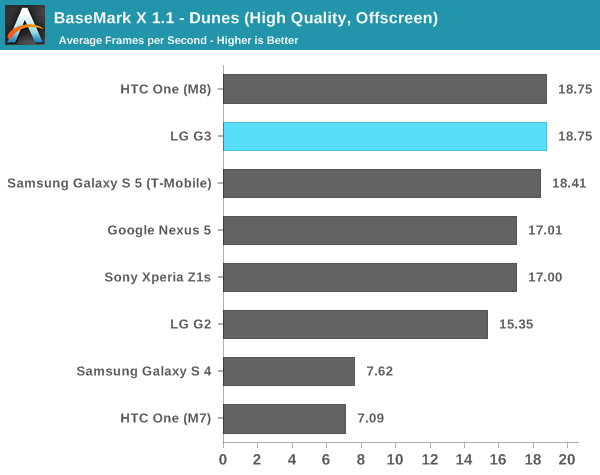 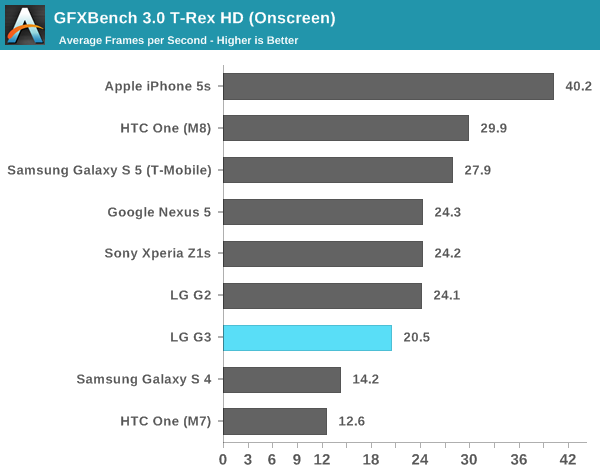 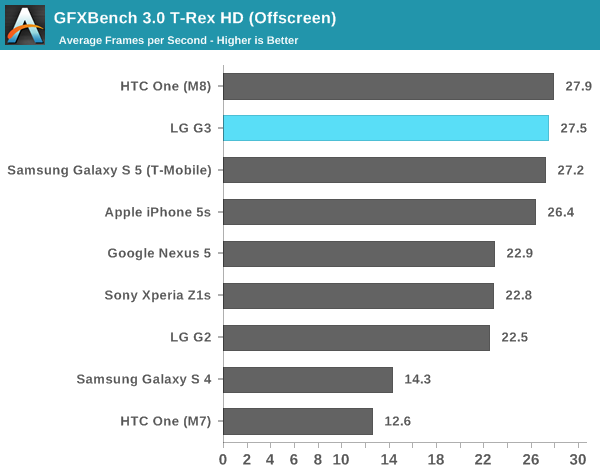 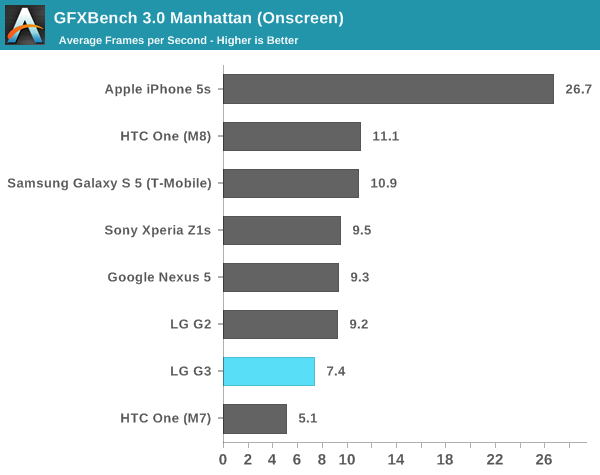 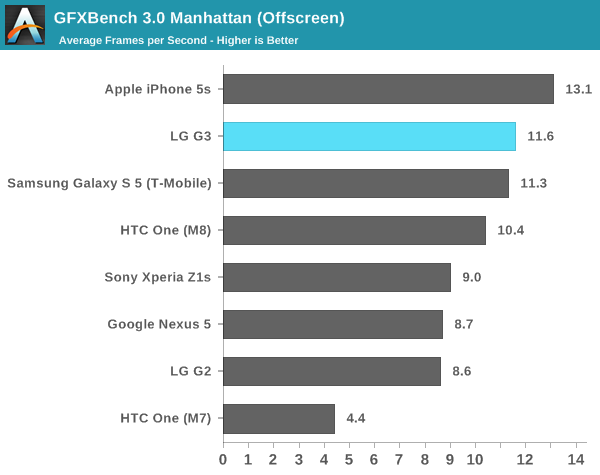 Here, we can see a noticeable trend. In the short tests, the LG G3 does great, easily nearing the top of the scores. However, 3DMark's extremely long-running test means that the G3 noticeably suffers in performance compared to the competition, and this is worsened by the G3's sinusoidal throttling patterns that cause significant degradation of performance for periods of time to balance out the high performance periods. On the on-screen tests, the G3 does worse than the high-end competition, which suggests that  QHD/1440p truly does need Snapdragon 805's Adreno 420 in order to keep real-world performance from regressing relative to the Snapdragon 801, 1080p-screened counterparts.

NAND performance used to be an afterthought, and effectively never discussed in most reviews. However, after the original Nexus 7 revealed the headaches that come with poor I/O performance this metric has increasingly come under greater scrutiny. To quantify this performance, we turn to Androbench with custom settings to evaluate Android smartphones. 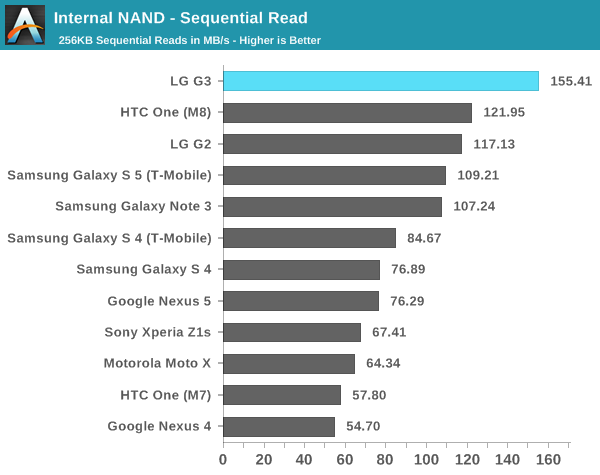 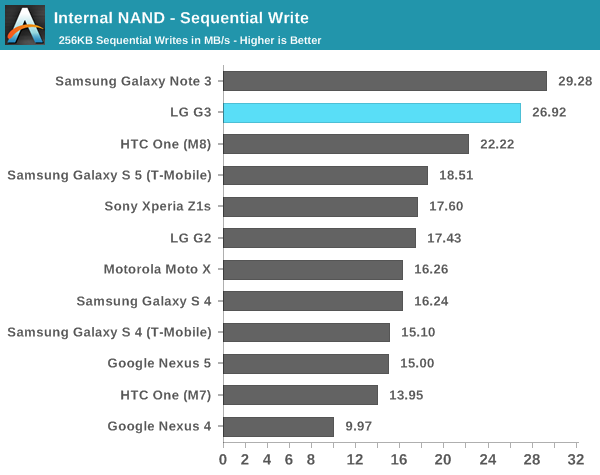 Here, the G3 is off to a great start. The sequential read speeds set new records and sequential write speeds are almost as good as it gets. This means that LG isn't cheaping out on NAND, which means that shooting 4K video and similarly intensive situations won't be a problem on the G3. However, random I/O performance is much more important as that's where people will notice poor performance in the form of stuttering and pauses. 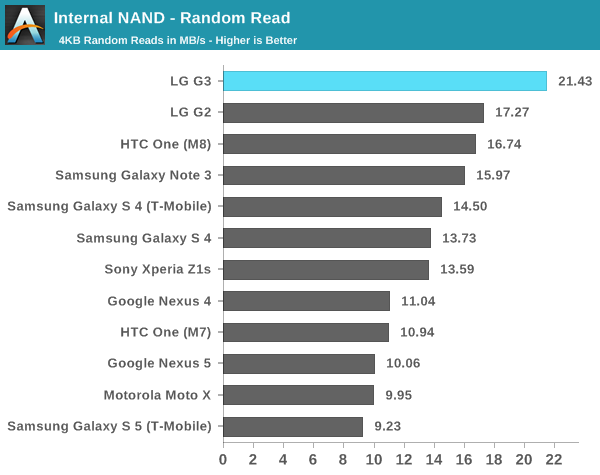 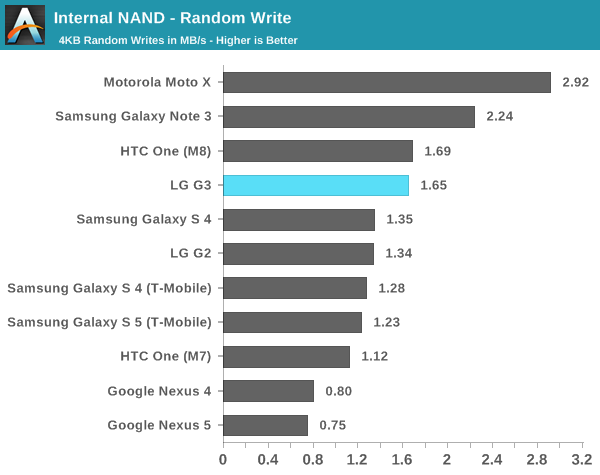 Here, we see a similar pattern. The LG G3 does great in random reads, but random write isn't quite as great. It's still perfectly usable and shouldn't present any problems for smoothness or general performance. The Moto X continues to hold its considerable lead here due to its F2FS file system that allows for much faster random I/O performance. Overall, the LG G3 shouldn't have any issues with I/O pauses, although you should still keep around 25% of your storage open to keep up I/O performance.