While we’ve gotten a good handle on how battery life is on the Snapdragon 801 platform with 1080p displays, we haven’t quite seen the same when it comes to a 1440p display. I’m sure that most people already understand the importance of battery life, so I’ll simply reiterate that our testing conditions are standardized. Everything other than the task at hand is turned off to the best of our abilities, and the display is calibrated as close as possible to 200 nits. The device is then run on an endless loop until it shuts down, starting with a fully charged battery. First, we’ll start with the WiFi web test.

I have to stop proceeding with the analysis with a disclaimer though. With the LG G3, we’ve found evidence of dimming behavior with manual brightness. In the worldwide model that we received, the dimming happens soon after setting the brightness level. A dangerous practice for sure if you only measure display brightness once before conducting battery life tests. However, in the SKT and likely the other Korean units that reviewers received, this dimming process takes around an hour or longer (but with a far shallower drop in actual brightness). It's clear that TI's LM3697 is the chip that controls the backlight brightness, but it's unclear what is setting the brightness curve. LG states that this mechanism is part of their 3A system to reduce display power, and they state that the brightness dimming effect is done in an effort to save power by reducing brightness at a rate that would be unnoticed according to the Weber-Fechener law of perception. This does make sense, but LG should offer the option to disable this functionality one way or another. 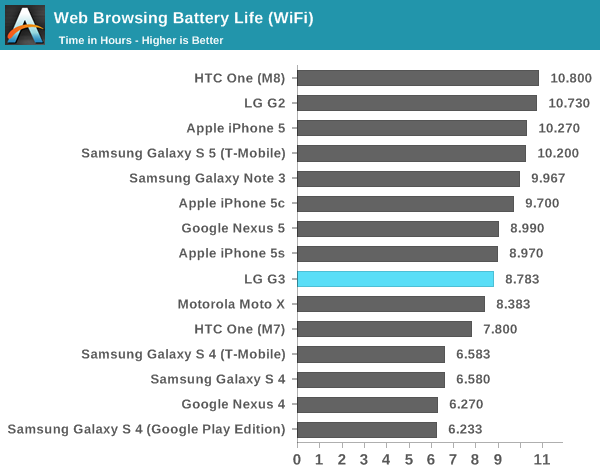 Here, the LG G3 has a major regression in battery life. While the LG G2 had around 11 hours of battery life on WiFi and was competitive with the Galaxy S5 and One (M8), the G3 is around the iPhone 5s in this test. There are a few reasons for this. If we compare battery capacity vs. display size, the LG begins at a disadvantage to HTC's One (M8). In order to equalize this gap, LG would need to fit the G3 with a 3150 mAh battery, something that would be difficult as a result of the loss in volumetric efficiency from the removable battery. The other reason is due to the lower panel efficiency, which is a direct result of the higher pixel density. 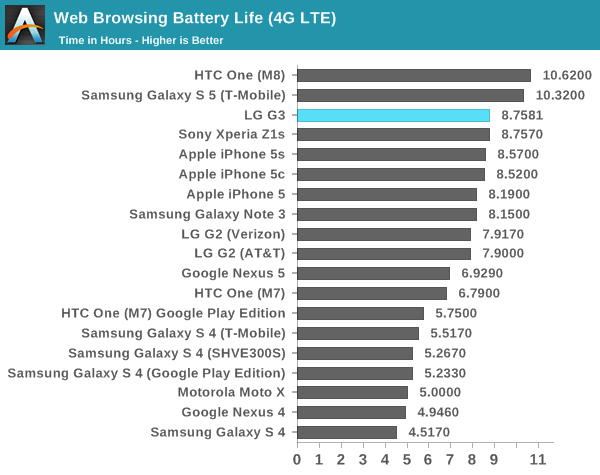 Surprisingly, in the LTE test we see a significant improvement over the LG G2, although it’s still behind the One (M8) and Galaxy S5 for the same reasons that I discussed in the WiFi test. These gains were likely made by improvements to RF and general process improvements such as envelope tracking and lower power process on the modem and other aspects of the SoC from S800 to S801. 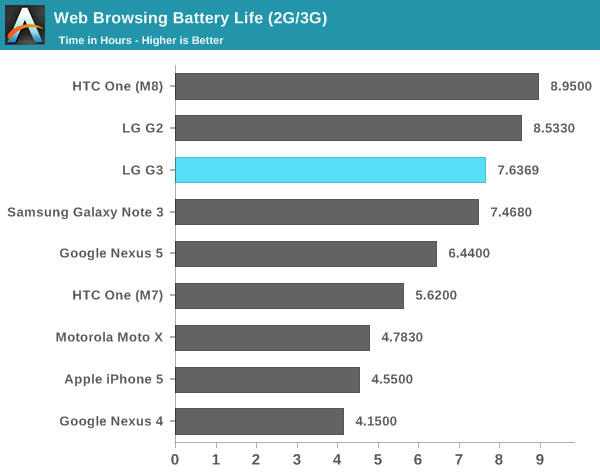 In WCDMA, there are very few surprises. As a result of bottlenecking on the network connection, battery life drops noticeably. The delta between the One (M8) and the G3 is relatively constant in this test as well, around 15-20% less in general.

Overall, the web test shows the power cost of the 1440p panel. However, in many situations the importance of display power efficiency can drop dramatically, especially if other components consume similar levels of power. To take a closer look at this, we turn to the compute-bound battery life tests. The first is GFXBench, which runs an endless loop of T-Rex on the display until the phone shuts down. 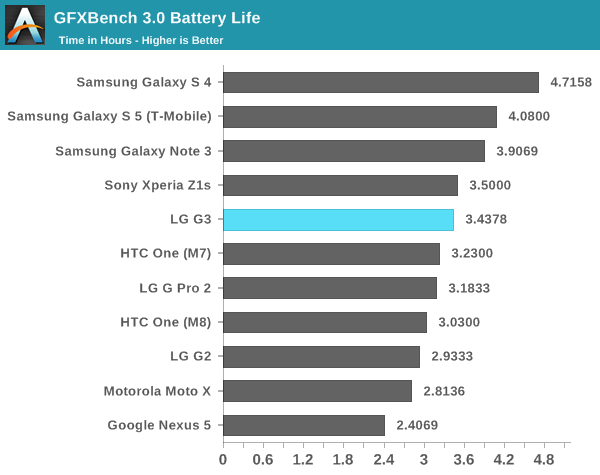 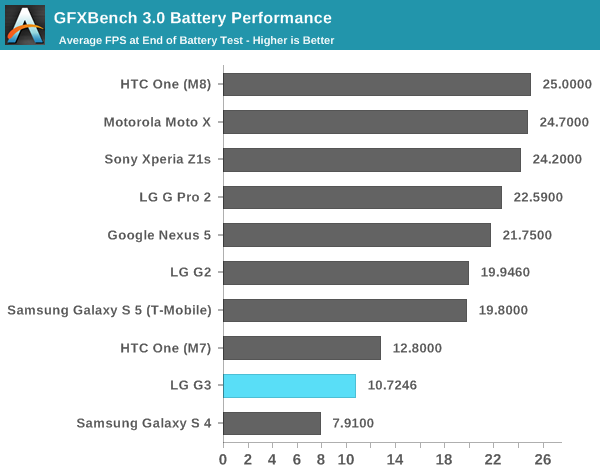 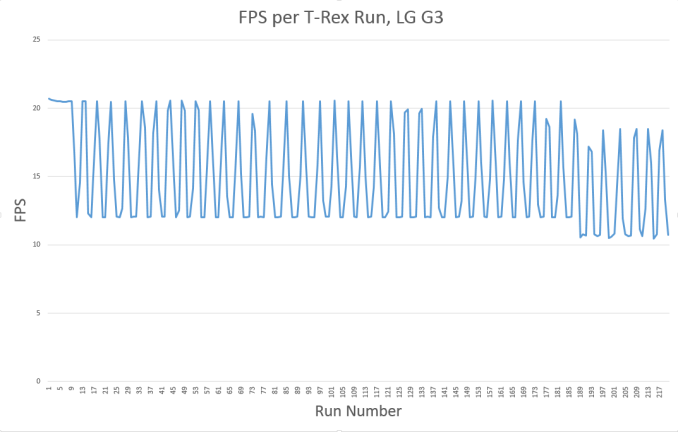 However, looking at the overall picture, it’s very clear that LG is simply using a throttling mechanism that results in sinusoidal behavior. By averaging the last runs, the realistic end of run FPS is around 13.636. By scaling this to the 1080p-equivalent FPS, we see that the end of run FPS is actually around 24.1357. This means that there’s still a noticeable difference between the One (M8) and LG G3 in overall thermal dissipation capabilities, although not nearly as bad as the end of run FPS value might suggest. 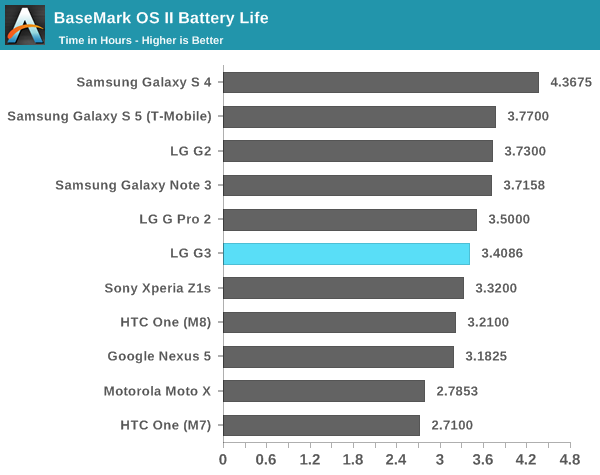 The next test is Basemark OS II, and we see that the battery life score sits between both the Galaxy S5 and One (M8), although it does worse than both of them in the battery score taking into account performance. 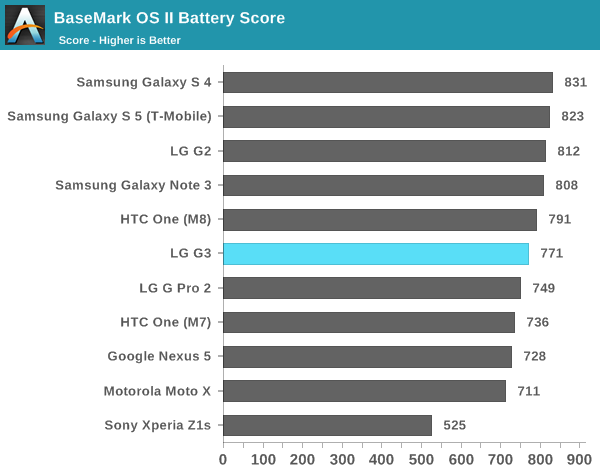 Overall, the LG G3 does acceptably well in battery life. However, after taking into account the dimming function it’s rather concerning how the G3 fails to keep up with the rest of the competition in this critical area. To really get a good idea what why this is though, we have to look at actual power numbers. This will allow us to truly quantify the power differences. 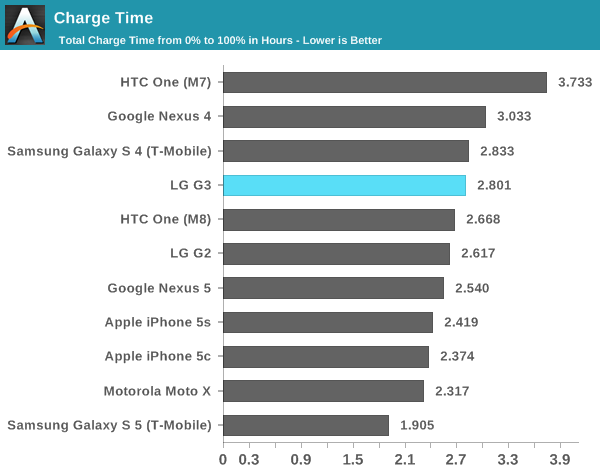 In this test, the LG G3 trails behind both the One (M8) and Galaxy S5 in charge time, although it's quite close to the One (M8). This is strange, especially because the LG G2 has the same battery size. However, this can be explained by the change to charging protocol, as it seems that the G3 doesn't support Qualcomm's Quick Charge technology. Instead, signalling is done over BC 1.2. As we'll see later in the article, this is due to the charger chip used.