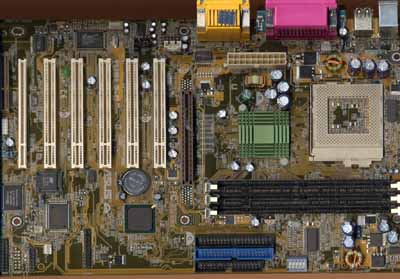 If the market doesn’t care much about the platform, then why should ASUS spend much time in tweaking the design of an 815 B-step motherboard?  The TUSL2-C, as the name implies, is a direct descendent of ASUS’ CUSL2 – their first i815 motherboard.  The TUSL2-C is virtually identical to the CUSL2 with the exception that it uses a B-step version of the 815EP Memory Controller Hub (MCH) meaning that it has no integrated graphics.

The TUSL2 features an ample 6 PCI slots, a universal AGP 4X slot and the ubiquitous CNR slot that has yet to be used for anything but obtaining ISO certification.

The board feature’s ASUS usual jumperless Award BIOS setup allowing for a range of FSB frequencies to be selected from 66MHz up to 166MHz; a set of dip switches accompanies the jumperless setup to manually configure the FSB if necessary – mainly tailoring to the needs of ASUS’ large OEM market.

The biggest detraction from the TUSL2-C is the lack of voltage adjustment support with Tualatin CPU's, although it is available when using a Coppermine or Mendocino CPU.  It seems as if ASUS didn’t take the time to allow their BIOS to adjust the status of the new VID25mv pin thus preventing any sort of voltage adjustment on the board.  Granted this is only an overclocking feature so if that is of no concern to you, then the TUSL2-C is just as solid as its older brother.