I have to say I am positively surprised. Given how bad some of JMicron's early designs were, I could not expect much from the JMF667H. We had a try with the JMF667H in the WD Black2 but in that case we only got the picture of how the JMF667H performs with one NAND configuration. The Black2 itself had some other limitation as well (like the lack of caching option) that made the product as a whole not worth the money and probably made the JMF667H look worse than it really was. However, as our benchmarks show, the JMF667H can be very competitive when paired with the right NAND and pretty decent even with cheaper NAND.

Sure the JMF667H still is not the fastest controller on the market but the good thing is that it is not trying to be. JMicron's strategy has always been to provide more of a budget alternative for the mainstream market instead of competing for the performance crown.

The JMF667H is not perfect and there are a couple of things I would like to see. The first one is support for TCG Opal 2.0 and IEEE-1667 encryption standards. The data we carry around is constantly becoming more valuable and as a result more vulnerable to theft, so support for these two standards is crucial. In addition, I bet it would help JMicron to get their controller to more OEMs, especially in the high profit business/IT space where the customers are willing to pay the extra for encryption support. Hopefully this is something JMicron will include in their next generation controller. 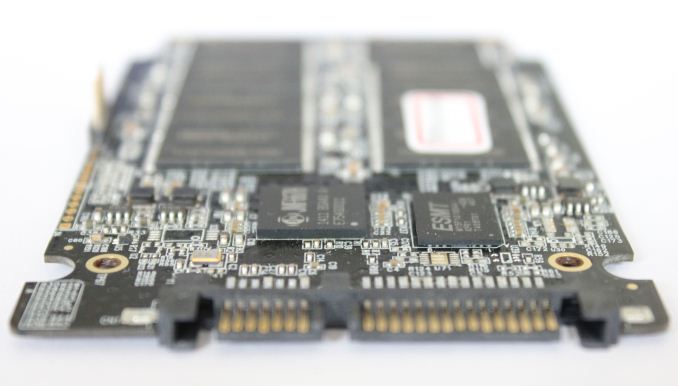 All in all, when paired with the right NAND (i.e. Toshiba), the JMF667H can certainly be a noteworthy controller. It provides performance that is similar or very close to Marvell based SSDs but at a lower cost and with bundled firmware. However, I think the big question is whether the JMF667H offers enough cost savings when paired with the more expensive Toshiba NAND. As NAND makes up the biggest part of the bill of materials, it can be hard to overcome the saving from cheaper NAND, but I believe this is ultimately up to the OEM and their relations with Toshiba, Micron, JMicron, and so on. With IMFT NAND the JMF667H is still decent and I can see it being the lowest-end drive for OEMs, which is where it sits well due to the cheaper controller and NAND. For a light user the difference in performance is likely negligible anyway, and that is ultimately the market for low-end SSDs.

I am eagerly waiting to hear about JMicron's plans for PCIe. The JMF667H was admittedly late and at this point it can be rather difficult to gain interest from OEMs as everyone is preparing for PCIe. Hopefully JMicron's PCIe solution will be more timely and hopefully I'll have some details after meeting with them at Computex next week.