For Z87 GIGABYTE upgraded its software package to a new version of EasyTune. The number denoting the version was gone and the interface got an overhaul onto a black background and colored text. Rather than having all the tools associated with the motherboard as different applications, the layout was homogenized from a single interface called the ‘APP Center’, with different ‘APPs’ for each software function. Back at Z87 launch it was an excellent direction to take the software, although for a first public release it was a little rough around the edges. For Z97 we get the next iteration of APP Center and the APPs, and suffice to say it comes across as a lot easier to use and a lot of those sharp pointy corners that might have affected user experience are smoothed rather nicely. 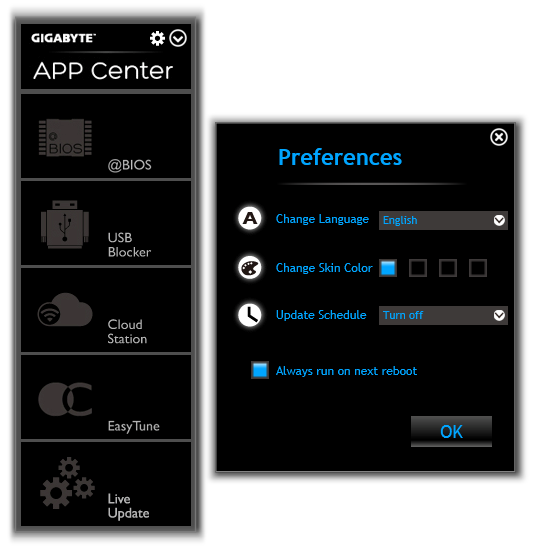 There can still be an argument made for a color-on-black livery. Typically this high-contrast layout is more suited for low power environments and to reduce eye-strain, however after a while the effect of reading color-on-black can affect a user more than the usual black-on-white (which also tends to offer better readability).

That aside, the above image shows the APP Center and the preferences. The user can adjust the skin color to one of four colors (to match each of the GIGABYTE product lines), as well as adjust update schedules. The APP Center list is scrollable, however the Live Update application remains fixed. If there are no updates, then Live Update will not offer a window to show no updates, but a dialog box. However based on previous iterations of the software, it would be keen to see if GIGABYTE has implemented the feature to see the size of updates before a user downloads them. 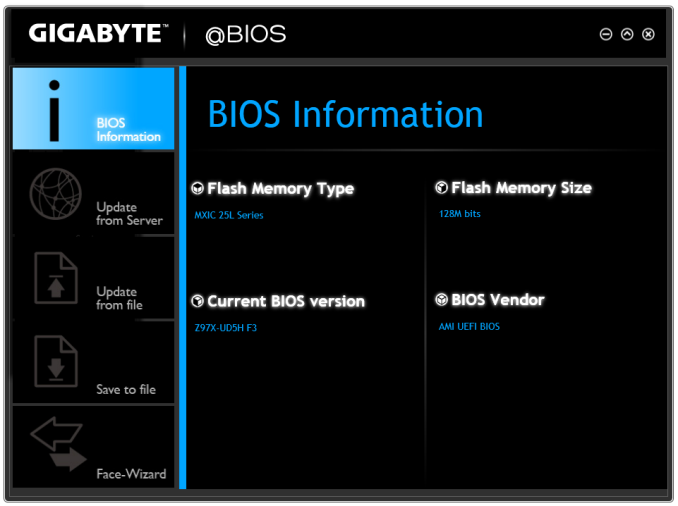 The tool to update the BIOS in the OS is @BIOS (‘at-BIOS’), and this version seems identical to that shown with Z87. Users can update from a global server or a file: 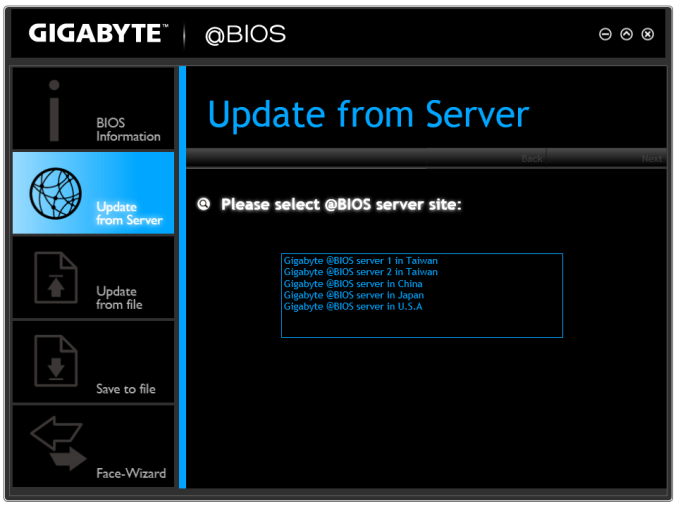 We also have the option to adjust the boot-up POST image in the Face Wizard tab: 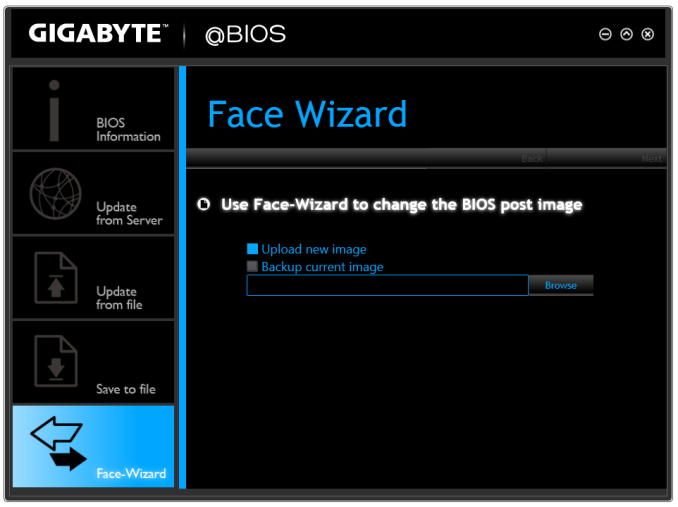 The USB Blocker tool allows businesses to reject certain types of USB device inserted in the machine. As such, if you have a touch interface system, or one that is to be controlled remotely, with this software you should be able to disable any other USB Input devices (mouse/keyboard) from being inserted, along with storage devices. 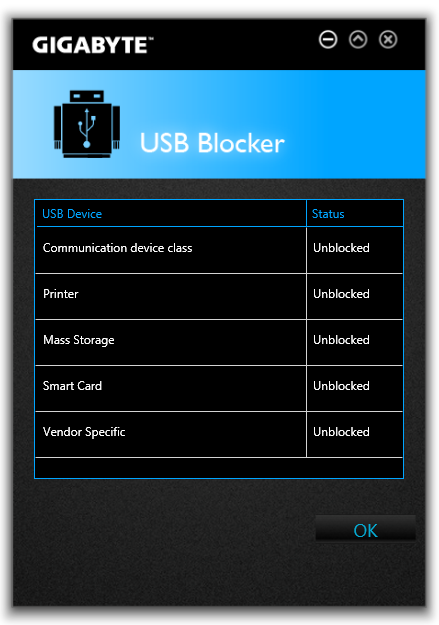 One of the new features in APP Center is the Cloud Station. As more motherboard manufacturers move to tools that influence other devices other than the PC, Cloud Station is GIGABYTE’s solution. It offers several different wireless communication options:

Note that as the UD5H does not come with a WiFi card, some of these tools will only be available if a WiFi module is installed. However the other features should work if the system is connected to a WiFi router, either wirelessly or wired. 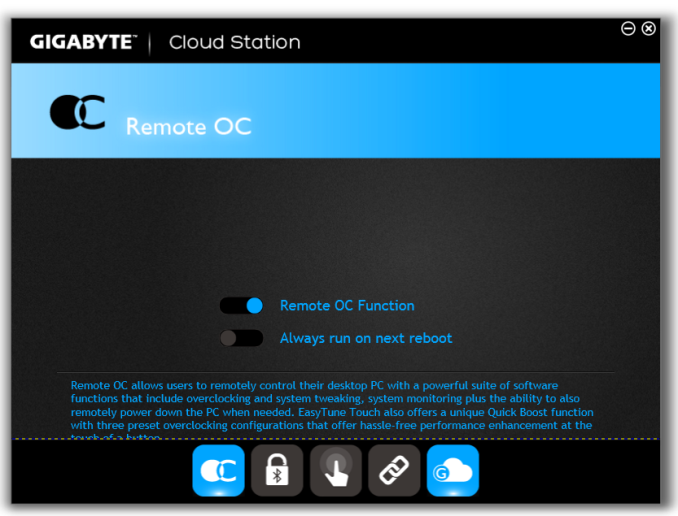 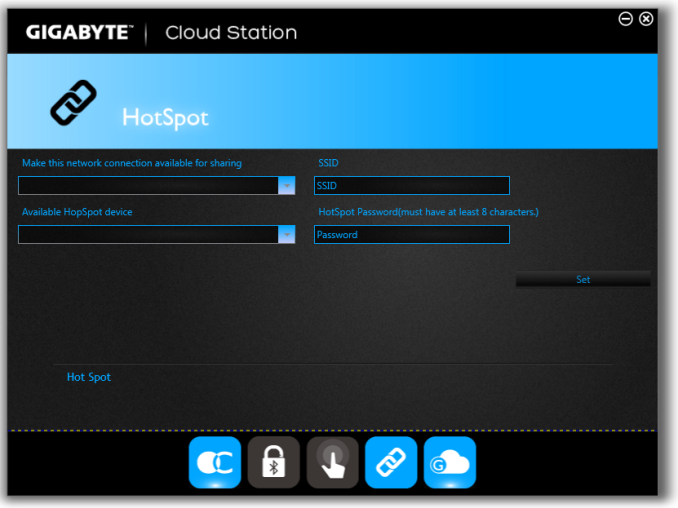 The overclocking software paired with a GIGABYTE motherboard has historically been named EasyTune, and with Z97 it further lives up to its name by improving the controls for advanced overclocking. The main screen shows the quick overclock options:

Loading up EasyTune also gives the Hardware Monitor shown on the right, useful for cross checking values. Each of the options in the Smart Quick Boost tab offers a setting from Default, Light, Medium, Extreme, Energy Saving to Auto Tuning. The results of these settings will be later in the review during our overclocking segment. 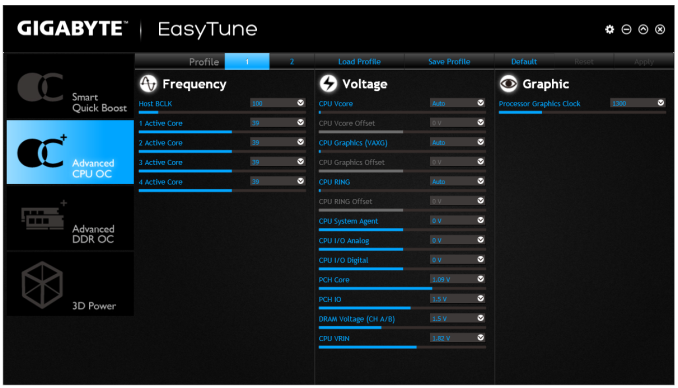 By reducing the size of the screen for EasyTune advanced overclocking options, and separating them into several different menus, EasyTune is easier to use than the Z87 version. In the Advanced CPU tab, we can adjust the BCLK, per-core multipliers, the CPU voltages and IGP frequencies. 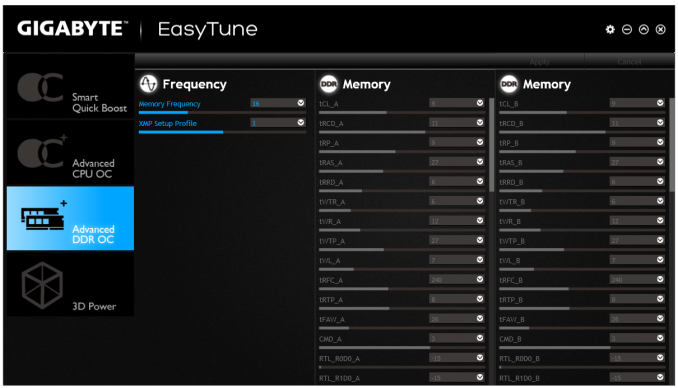 As DRAM tweaking can be as magician’s game, users can either use XMP directly, or play with all the sub-timings. I would have preferred the DRAM voltage to be in this menu as well, but GIGABYTE has located that option back in the CPU OC menu. 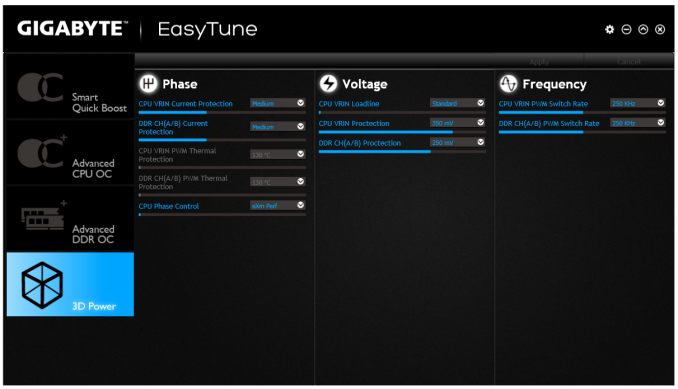 For load line calibration, phase control and switching rates, GIGABYTE has grouped these options into the 3D Power menu.

While ‘EZ’ does not translate to my part of the Atlantic (‘ee-zed’ makes no sense here), for those that derive their alphabet via the North American vernacular, the Easy Setup menu allows users to adjust their storage options. The first Disk Mode Switch tab selects AHCI/IDE/RAID: 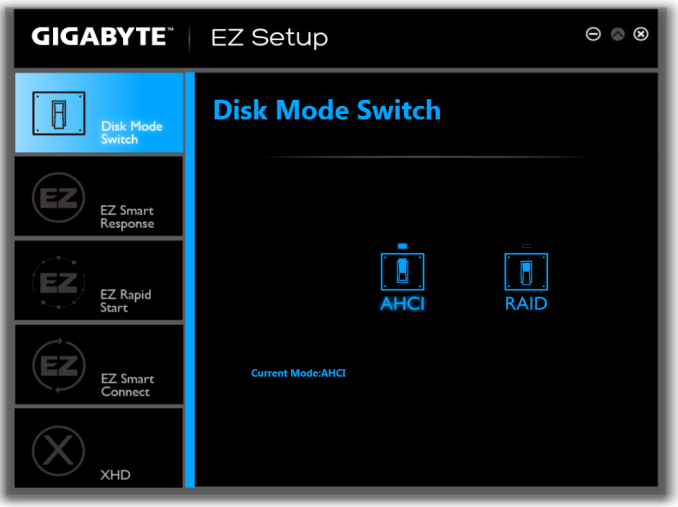 The Rapid Start tab helps implement Intel RST by pairing an SSD with the boot drive as a caching device: 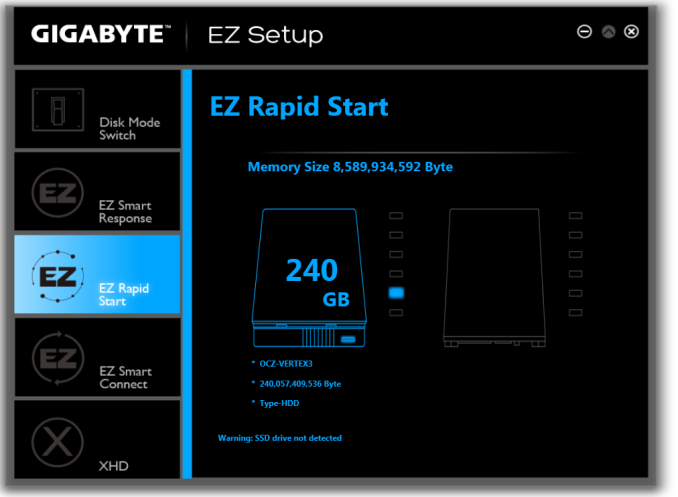 Due to the new UEFI/EFI topology, users of Windows 7/8 systems can decrease their POST/booting times by using faster modes. In the case of Windows 8, this often means disabling options to allow users to re-enter the BIOS during POST.  The Fast Boot APP from GIGABYTE helps deal with which booting mode the user would prefer, along with an option to reboot via the BIOS. 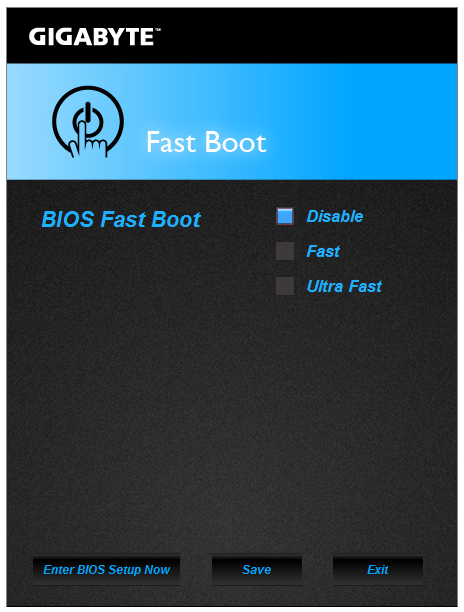 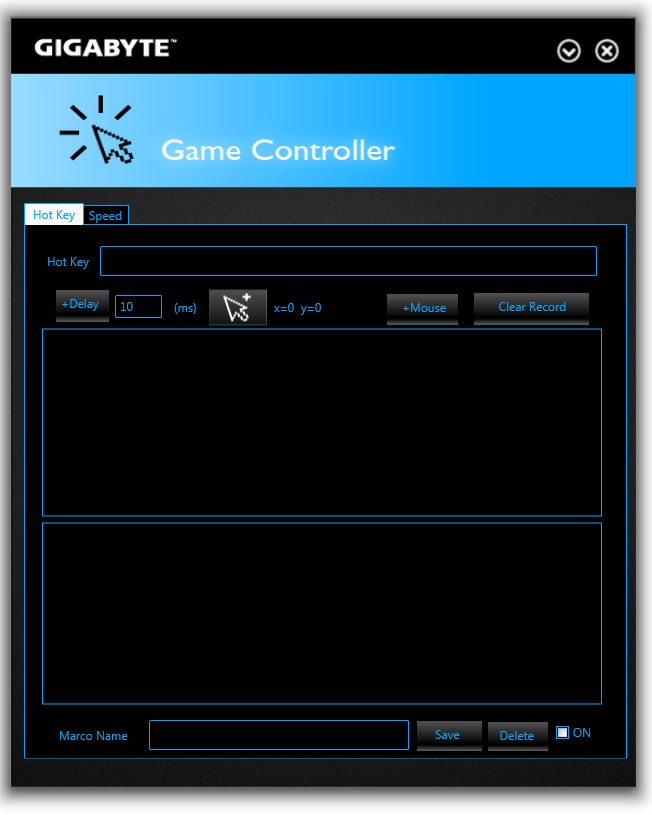 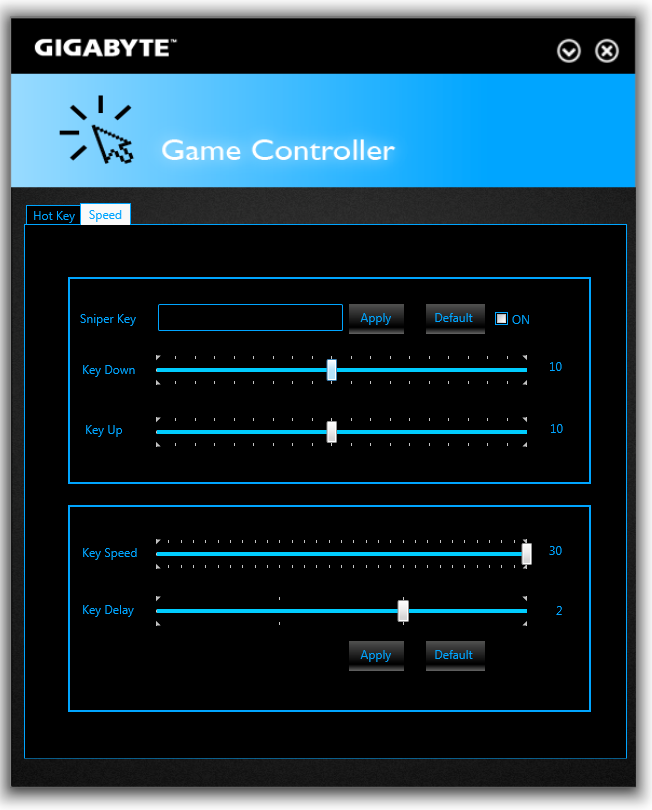 As part of the reshuffle of the GIGABYTE software, fan controls have moved into the System Information section. 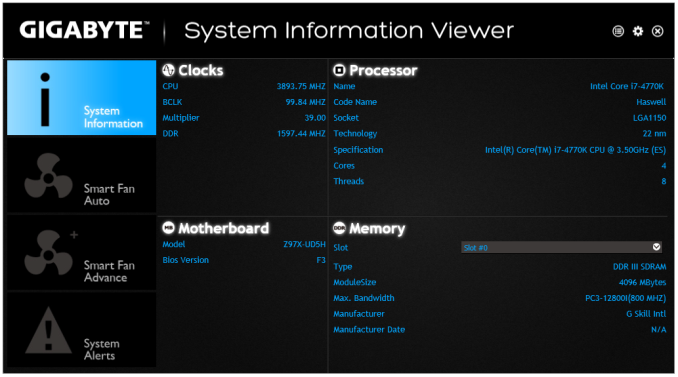 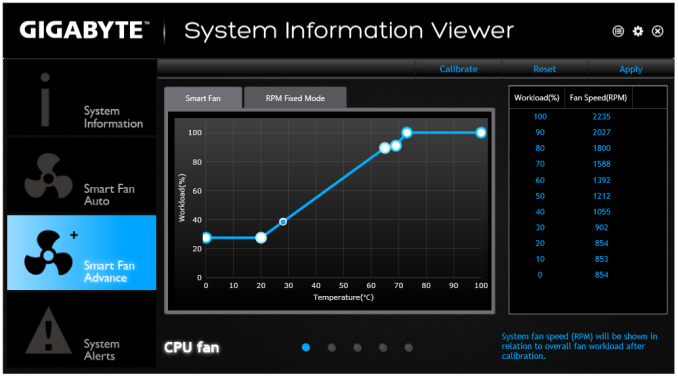 The calibration shows the voltage applied (as a % of maximum) against the fan speed. Users then have to do the mental calculations for the gradient of the fan speed. Ideally the mathematics should be dealt with on the software side (and the mathematics is really, really simple) and the graph axes updated appropriately, but at present few motherboard manufacturers are making that leap.