Kicking off our look at the R9 295X2’s features and build quality, as we alluded to in our introduction the R9 295X2 is a card of many firsts for AMD. It is the first 500W card for the company, it is the first luxury class video card for the company, and it is of course the first reference card with a closed loop liquid cooler And since the elephant in the room is that CLLC, let’s start our review with that.

Liquid cooling for GPUs is in and of itself not a new concept. Self-builders and boutique builders have been using self-assembled (open loop) liquid cooling assemblies on GPUs for years, as GPUs have exceeded CPUs for heat generation for some time now. However it’s only within the last few years that closed loop liquid coolers have come into the mainstream, and still more recent yet since board manufacturers started using CLLCs in their base designs as opposed to an aftermarket modification. 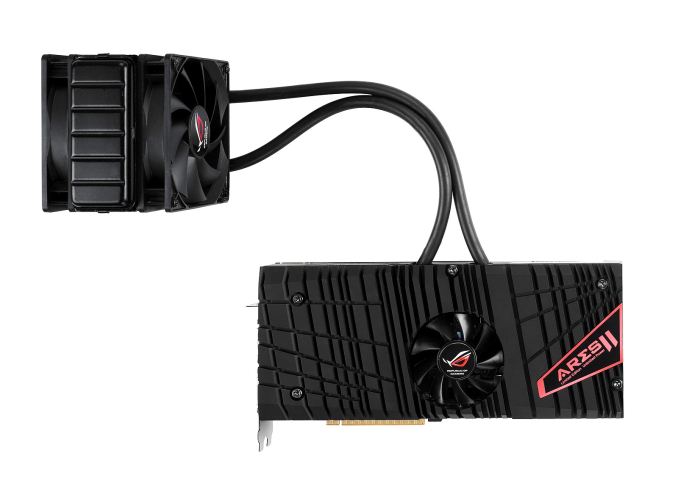 The first notable card to ship with a CLLC was Asus’s ROG ARES II, a high end boutique design that put two 7970GEs on a single board. The ARES brand is used for Asus’s custom designed cutting edge video cards, both of which have been dual-GPU cards in the same vein as today’s R9 295X2. At the time Asus needed to move around 500W (just like AMD today) and so they used an interesting dual cooler design that combined a split blower with a CLLC, allowing for both the GPUs and the associated discrete components to be effectively cooled in spite of the immense heat. The end result was a rare (1000pc) card that served as a proof of concept for the retail CLLC design, and at least to some extent the market for such a design.

It’s this design that AMD is clearly taking a hint or two from in building the R9 295X2. Like Asus’s design, AMD is essentially punting on cooling the GPUs directly, moving to a split design that uses both direct and indirect cooling.

For GPU cooling AMD has teamed up with Asetek to utilize their collection of CLLC parts to build out the R9 295X2. Each GPU is outfit with one of Asetek’s higher end copper-based pumps, which operate together in a serial design. At the other end of the loop is one of Asetek’s 120mm radiators – we haven’t been able to identify the specific radiator, but at 38mm thick it’s somewhere in between Asetek’s standard (single) thickness and double-thick radiators. Sending air through the radiator in turn is a single 120mm fan in a push configuration. With the bulk of the heat generated by the R9 295X2 coming from the GPUs, the bulk of the heat exhaustion in turn is handled by this radiator setup. 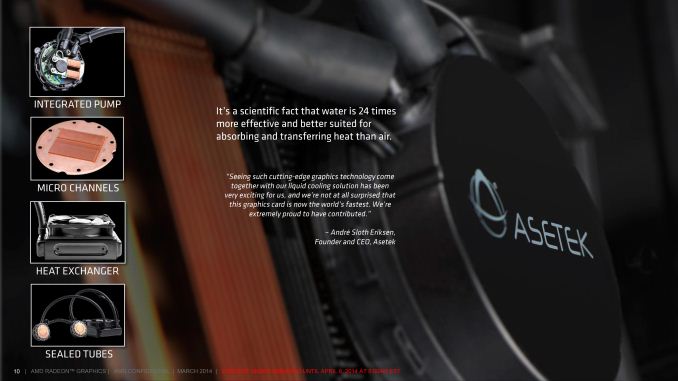 Ultimately the use of a CLLC is what’s key to making the R9 295X2 a viable and acoustically practical product. While it’s plenty possible to build a triple slot open air cooler, as exemplified by products such as the PowerColor custom 7990, those products end up being especially large even by video card standards, and noise is often an ongoing concern. By going with a separate radiator and using liquid cooling to attach it to the GPUs, AMD is able to use a heatsink with a much larger surface area and a large, slow case fan to move air as opposed to having to operate a smaller fan at higher (i.e. louder) speeds, as we saw with the Radeon HD 6990. At the end of the day the PCI-Express form factor imposes certain limits on cooler design by virtue of its shape and overall size of I/O slots, so AMD has forgone PCI-Express entirely by utilizing an external radiator.

Meanwhile a secondary split-blower design provides cooling for the discrete components on the board itself, including the various VRMs and the RAM. AMD utilizes a metal baseplate and secondary copper heatsink over the PCB to channel heat out of those smaller components, with grooves in the baseplate directing the airflow. The use of this split design with a radiator and a split-blower allows AMD to use a CLLC for the GPUs while resolving the biggest roadblock in aftermarket CLLC GPU cooling, which is cooling those discrete components. The end result is a cooling setup that is almost (but not quite) a fully exhausting cooler. All of the GPU heat and half of the discrete component heat is exhausted outside of the case, leaving only a small amount of heat from the other half of the discrete components to be cycled back into the case. 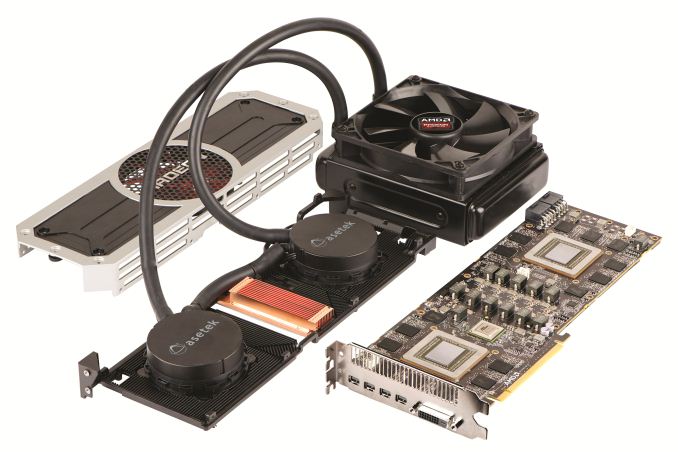 On that note, as can be expected from the inclusion of a CLLC, the R9 295X2’s mounting requirements will have a significant impact on its case compatibility. Installing the R9 295X2 will require an easily accessible 120mm fan exhaust mount, something that’s available in many cases, but not all of them. Our own testbed has a 120mm/140mm mount directly above the GPU which we’re using for our testing, but this is something we can get away with because our 2x140mm CPU CLLC is mounted at the top of the case. Mounting a CPU CLLC and an R9 295X2 will likely tap all of the available mounts available in mid-tower cases, so going for a dual R9 295X2 setup can be assumed to require a full tower ATX case to come up with enough mounting points. 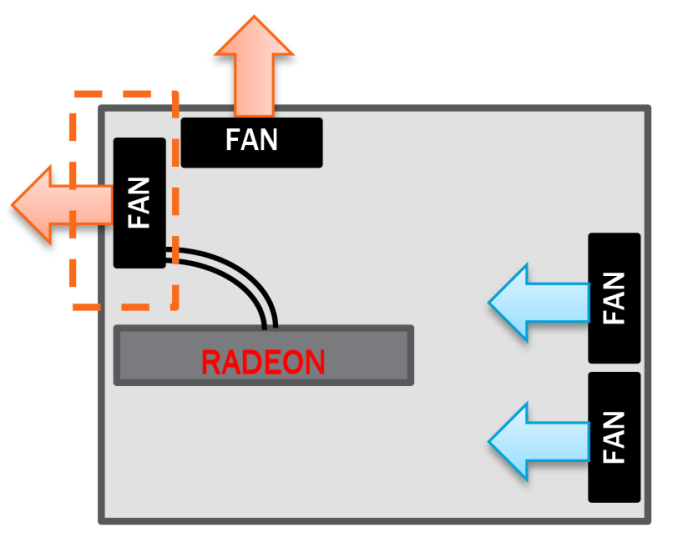 Moving on, beyond the cooler we have the board itself. At 12 inches long the R9 295X2 is the same length as the 7990 and the 6990, so radiator aside it fits in the same space as AMD’s previous dual-GPU cards. Also unchanged compared to past AMD designs, and unlike Asus’s earlier CLLC card, the R9 295X2 is also a standard height card. Some additional clearance is required for the CLLC hoses, but the board and the shroud itself do not protrude any, making it a bit easier to install the card.

Removing the pump and heatsink assembly exposes the board itself, which utilizes a fairly typical layout for a dual-GPU design. The two Hawaii GPUs sit at opposite ends of the board, with each GPU surrounded by its 4GB of VRAM. For each GPU 8 chips are on the front of the board while the other 8 chips are on the back. Meanwhile the various VRM components lie at the center of the card (explaining the earlier secondary copper heatsink), and to the left of that a PLX 48 lane PCIe switch.

The PCB itself is 14 layers, making it an especially intricate PCB, but one necessary to carry 500W while also routing 1024 GDDR5 lines and 48 PCIe 3 lanes. For power delivery and regulation AMD is using a 4+1+1 design for each GPU, which breaks down to 4 power phases for the GPU, one power phase for the memory interface, and one power phase for the memory itself. This 4+1+1 setup is functional for AMD’s needs at stock settings, but between the CLLC and the power delivery system it’s clear that AMD hasn’t built this board for extreme overclocking.

Speaking of power delivery, let’s talk about the 2 8pin PCIe power sockets that are found at the top right side of the card. For those of our readers who can quote PCIe specifications by heart, the standard limit for an 8pin PCIe socket is 150W, which in this configuration would mean that the R9 295X2 has a 375W (150+150+75) power delivery system. By PCIe standards this has the board coming up short, but as we found out back in 2011 with the launch of the 6990, when it comes to these high end specialty cards PCIe compliance no longer matters. In the case of the 6990 and now the R9 295X2, AMD is essentially designing to the capabilities of the hardware rather than the PCIe specification, and the PCI-SIG for their part is not an enforcement body. Other than likely not being able to get their card validated as PCI-Express compliant and therefore included on the Systems Integrator List, AMD isn’t penalized for exceeding the PCIe power delivery standard.

So why does the 500W R9 295X2 only have 2 PCIe power sockets? As it turns out this is an intentional decision by AMD to improve the card’s compatibility. Dual dual-GPU (Quadfire) setups are especially popular with boutique builders and their customers, and very few PSUs offer more than 4 8pin PCIe power plugs. As a result, by using just 2 power sockets the R9 295X2 is compatible with a wider range of PSUs when being used in Quadfire setups. Meanwhile on the power delivery side of the equation, most (if not all) of the PSUs that can reliably push the necessary wattage to support one or two R9 295X2s have no problem delivering the roughly 220W per socket that the card requires. Which is why at the end of the day AMD can even do this, because the PSUs in the market today can handle it.

Speaking of power, it’s worth pointing out that AMD’s official system requirements for the R9 295X2 call for a PSU that can deliver 28A per 8pin PCIe power connector, with a combined amperage of 50A. For most PSUs this means you’re looking at an 800W PSU being required for a single card, and a 1500W PSU for a Quadfire setup.

Meanwhile our final stop on our tour of the R9 295X’s PCB is the I/O connectivity. Here AMD is using the same setup as they used for the 7990, with 4 mini-DisplayPort connectors and a single DL-DVI-D connector sharing the bottom row of the I/O bracket, while the top of the bracket is dedicated to exhausting hot air. With a single R9 290X already capable of driving most games at high settings on single-display (2560x1600/1440) resolutions, the R9 295X2 is primarily targeted towards users who are either using 4K displays or using Eyefinity setups, either of which is best matched with DisplayPorts rather than additional DVI/HDMI ports. As always these are dual-mode ports, so they can easily be converted to HDMI and DVI if the need arises.