At MWC this year Broadcom announced its BCM4354 802.11ac 2x2 MIMO WiFi combo chip for smartphones/tablets, which found its way into the GS5. The result is a smartphone capable of negotiating with an 802.11ac AP at 867Mbps, and transferring data at up to 436Mbps.

Although peak performance is nice, there are also power benefits to being able to transfer data quickly over WiFi (race to sleep applies to network interfaces as well). 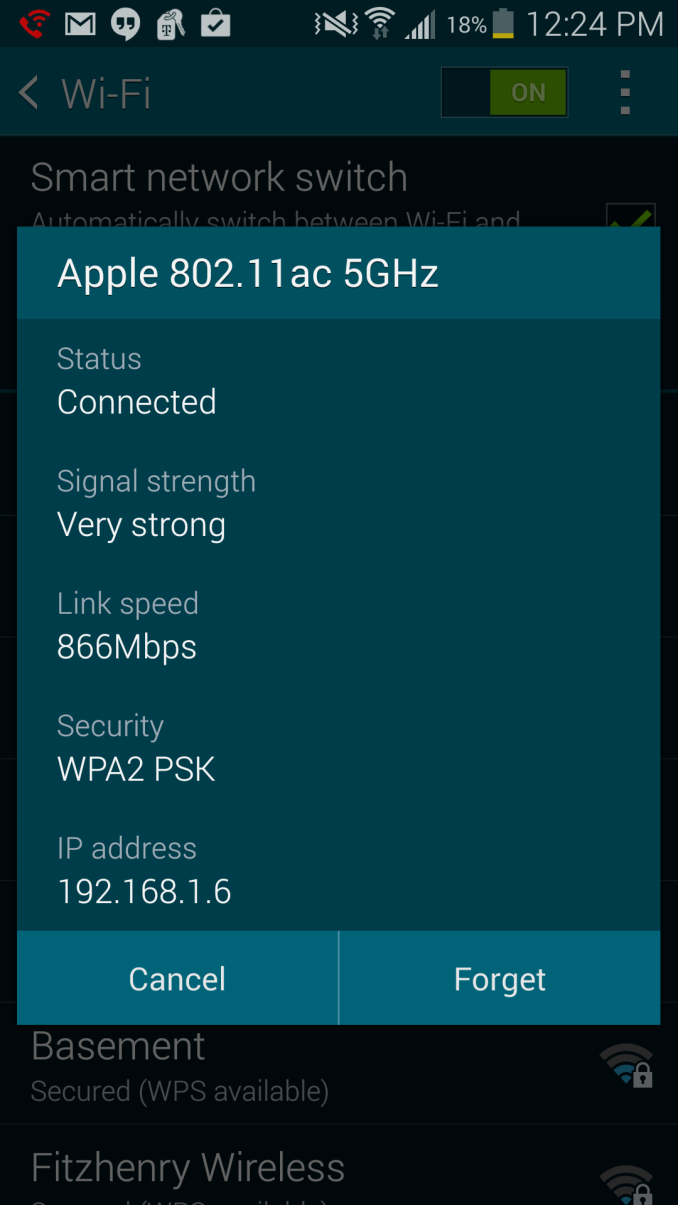 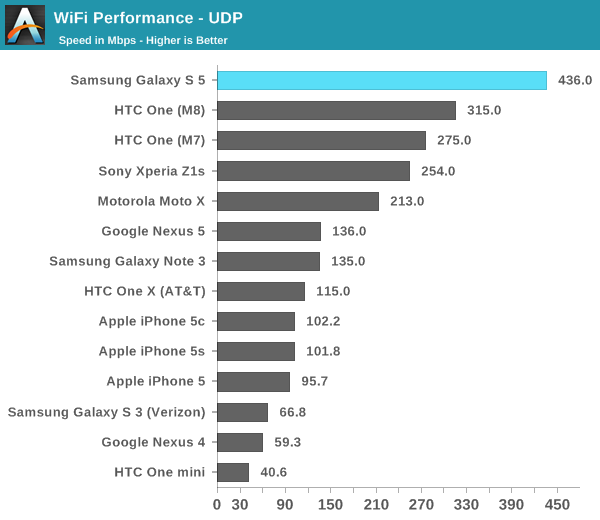 The Snapdragon 801 features Qualcomm's integrated category 4 LTE 9x25 modem core. As I mentioned in our power analysis, Samsung also chose to include Qualcomm's QFE1100 envelope tracker (just like in the Galaxy Note 3). The GS5 is also the first flagship Samsung device to include support for 2 carrier aggregation on supported LTE networks. Samsung doesn't appear to be using Qualcomm's antenna tuner or any other RF360 components in the Galaxy S 5.

Seamless transition between network interfaces is one component of Qualcomm's vision of the future of connected devices. The problem is presently more of a software one than a hardware challenge. Samsung is beginning to explore software abstraction of underlying network interfaces with the GS5's software stack. There's now an option to prevent transitioning to WiFi networks that don't offer an improved network experience compared to your broadband connection. I haven't had a ton of time to test this feature out yet but it's something I plan on messing with more over the coming weeks.

The other big feature is what Samsung is calling Download booster. If enabled and under the right conditions, download booster allows you to combine WiFi and cellular network interfaces to accelerate large file downloads. All you have to do is enable download booster and you'll get a notification if it's active and working:

Download booster uses HTTP range requests to divide up files between the two network links. The feature can migrate data sessions from one link to another (WiFi to LTE, LTE to WiFi). Supported apps include the Play Store, YouTube, Facebook photo/video downloads, Samsung apps and standard HTTP web browsing (both Samsung's own browser and third party browsers). FTP and UDP aren't supported, nor is HTTPS.

There are other limitations as well. File downloads smaller than 30MB won't trigger download booster. Similarly, if one of the interfaces is substantially faster than the other download booster won't activate either. My home internet connection can regularly pull files down at 50 - 60Mbps, compared to < 10Mbps for T-Mobile LTE. When I was getting ~7Mbps over LTE and 50Mbps over WiFi, download booster automatically turned itself off. If I throttled my home network to 22Mbps however, download booster did its thing and gave me a healthy combined download speed of 30Mbps. 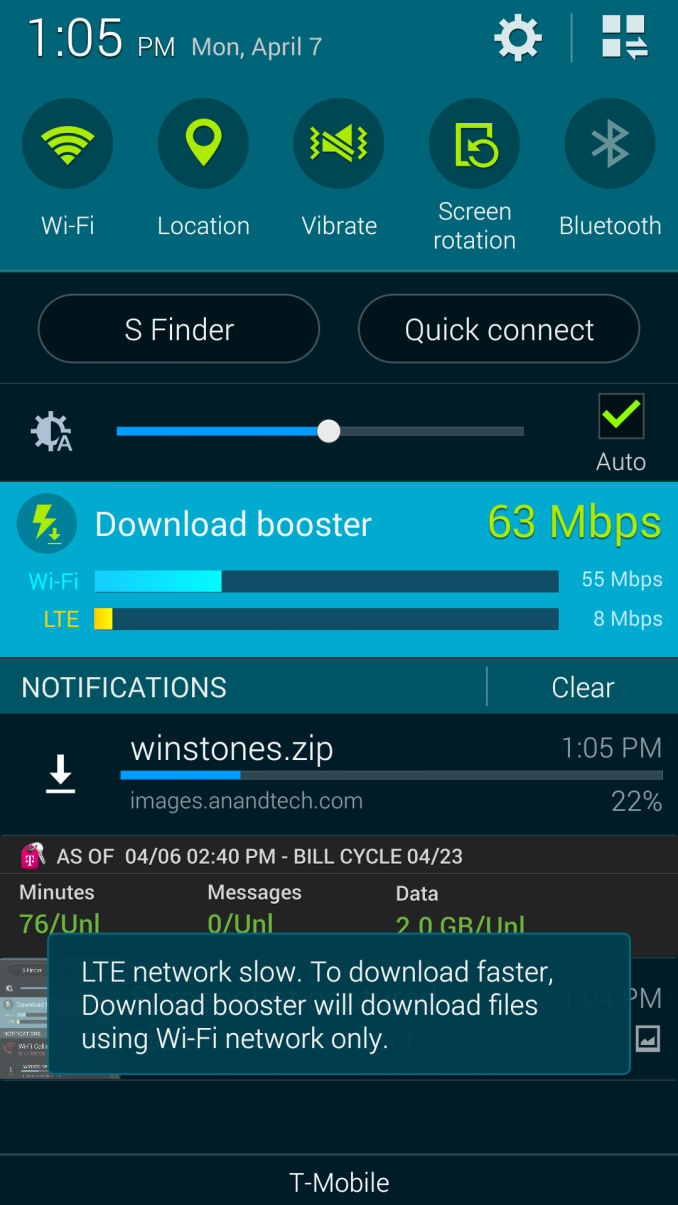 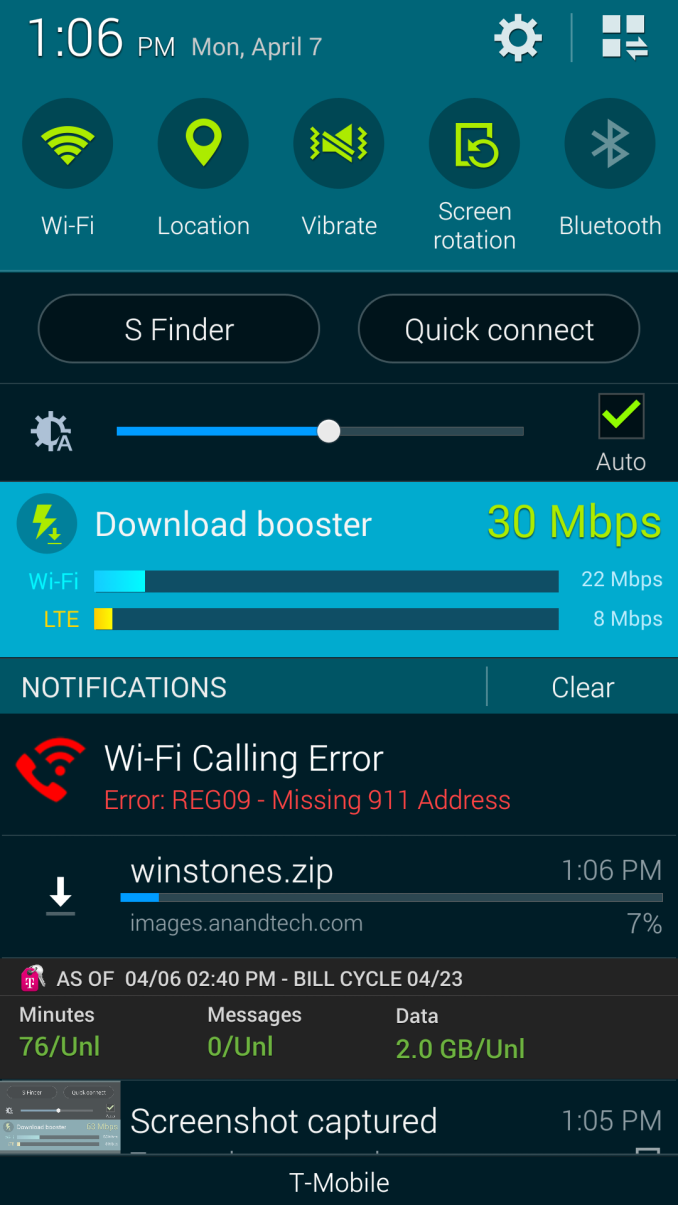 Download booster is a neat feature, although of limited use for those of us without truly unlimited high speed data plans. That being said, if you need to speed up a download in a pinch it's a great way to do that. I'm often at a press event wanting to download a benchmark onto a device as quickly as possible, usually without great WiFi or cellular reception - I can see download booster being very useful there at least.