As the smartphone market continues to mature, the distinguishing between smartphones becomes harder and harder as OEMs continue to converge in platform and in most other aspects. This is most evident when looking at the progression from the Galaxy S2 generation to today. Back then, the Galaxy S2 was notable because of its Exynos 4210 SoC, which was far ahead of Qualcomm’s dual core Scorpion solutions at the time, which meant non-Samsung OEMs had notably worse CPU and GPU performance. The same was also true for the original Galaxy S with its Hummingbird SoC. Today, just about every OEM ships the same SoC. The difference between 8974AB and 8974AC is effectively only an eight percent CPU bump for the AC variant.

One of the key differentiators now in the market is display. The Galaxy S 5 features a 5.1-inch 1080p Full HD Super AMOLED display, equipped with the usual set of software defined color profiles. The GS5 gets a new adaptive profile that automatically adjusts the tint of the display according to the color of the ambient light. It's a neat effect, however Samsung's Cinema mode still ends up being the most accurate. 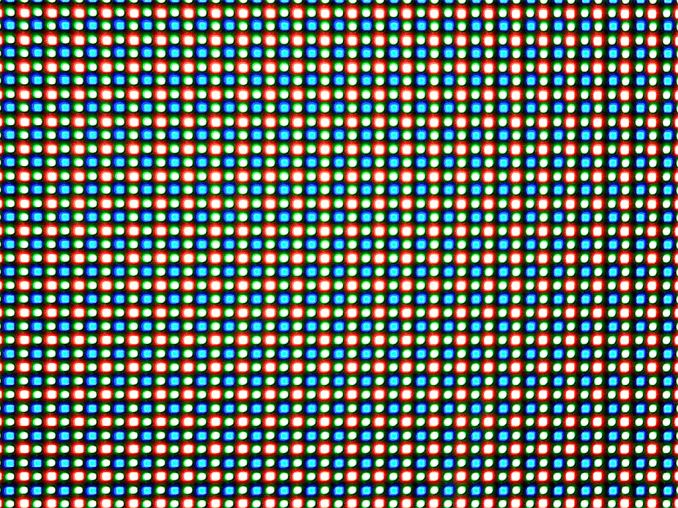 As always, we measure color accuracy using Spectracal’s CalMAN 5 software and a custom workflow for smartphones and tablets. 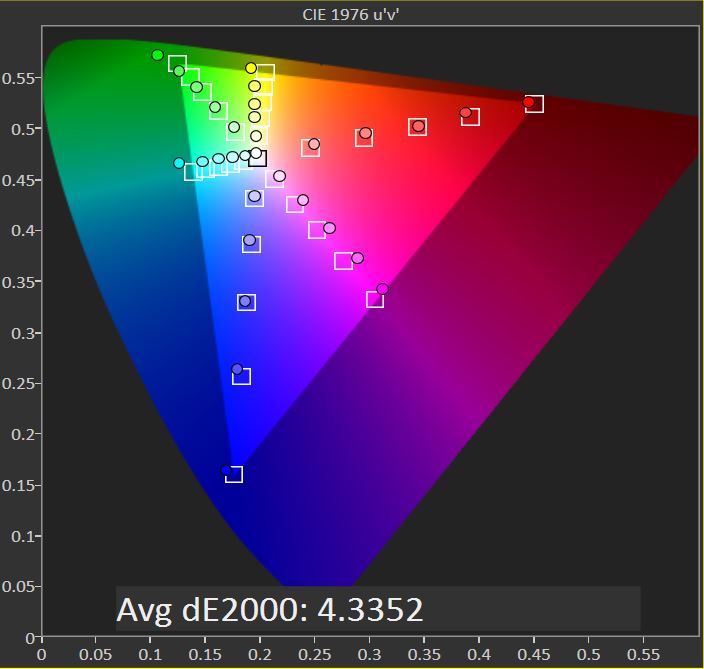 The results show that the Galaxy S5 has a display that is dramatically improved from the Galaxy S4. However, the Galaxy S line doesn’t exist in a vacuum, so it’s important to also look at how it compares against the best LCDs in other phones. In this department, things aren’t quite as perfect. To start, the color gamut control is still rather poor even on Cinema mode, as effectively all of the secondary colors miss the sRGB targets for saturation sweep. Yellow, cyan secondaries and green primaries are also notably out of the sRGB gamut triangle. While recent headlines have raved about the Galaxy S5’s record-setting color accuracy, I don’t see this at all in the results. Still, against the competition in the Android space, Samsung has improved a tremendous amount while other OEMs seem to be stagnating or even regressing in color accuracy. The only Android OEM that actually beats Samsung in the color accuracy department is now Google, which is strange because they contract out their hardware to other Android OEMs. 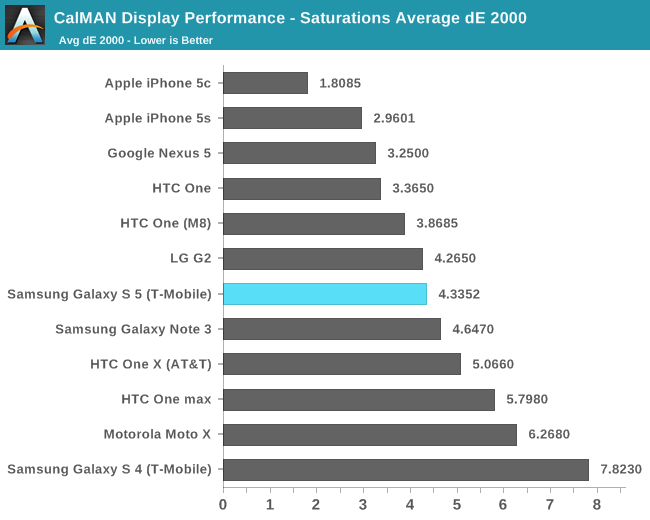 Looking at the saturation sweep, it’s evident that Samsung is now about equivalent to LG in color accuracy for their displays. HTC is barely ahead, with such a small difference that it’s not worth counting. Only Google and Apple have a noticeable lead in this department, a huge improvement from 2013 when Samsung trailed far behind most other competitors in this test. 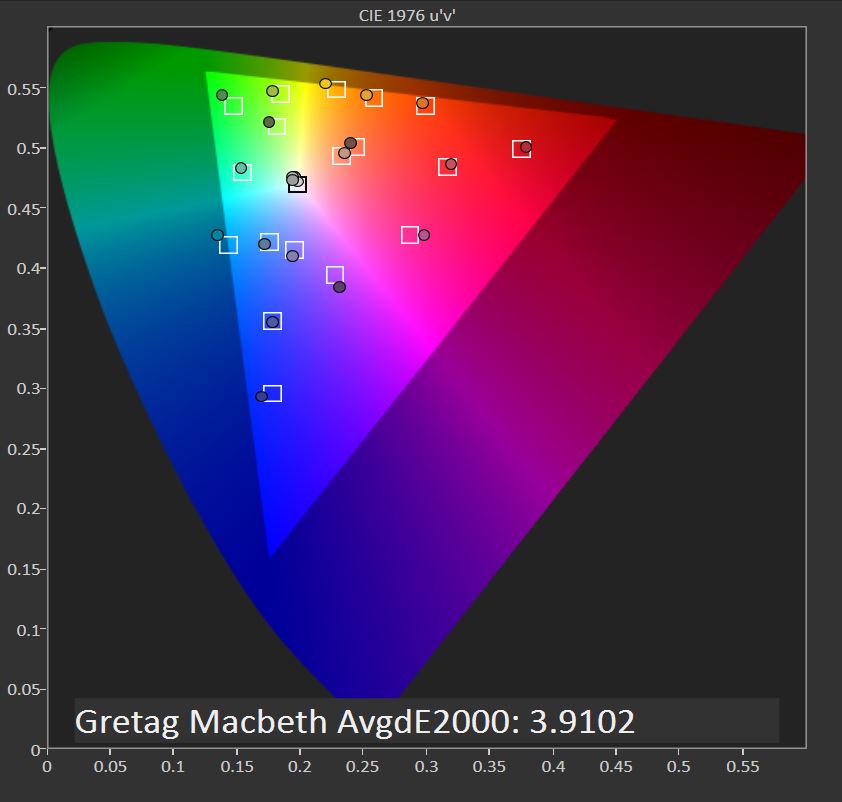 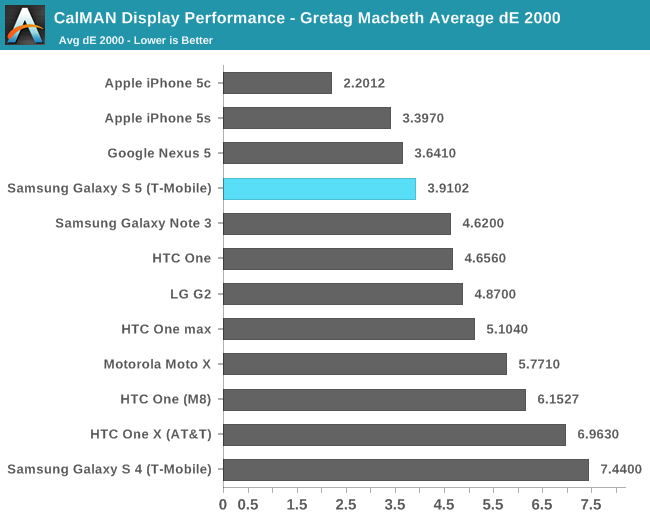 In the contrast department, Samsung continues to dominate, with effectively infinite contrast. Based upon some quick viewing of the display in the darkest room I have in the house, I don’t see any obvious DC bias issues. Unfortunately, I still see some ghosting on the display at low brightness which manifests as a purple trail when scrolling. This seems to be unchanged from the Galaxy S4. The minimum white brightness is around 1.8 nits, which is great for reading at night, as many LCD-screened phones such as the LG G Pro 2 have a minimum white brightness of around 7-12 nits. 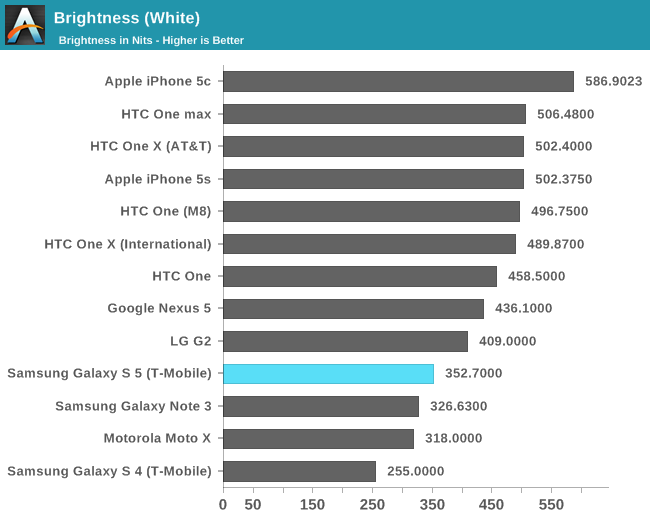 Samsung has also made great gains in the maximum brightness department, which is especially pleasing because for the longest time, AMOLED was noticeably less bright which made it incredibly difficult to read webpages and similar content outdoors. I’m happy to say that this is no longer the case, as the Galaxy S5 now has a display that realistically reaches around 440 nits outdoors with a pure white image, although this requires auto-brightness to be on and will vary with the screen mode. The maximum that is accessible without this daytime boost mode is somewhere around 350 nits.

The problem is the way Samsung has achieved this, something that is shown in the grayscale tests. While Samsung has done a great job in clamping down the white point to around 6504k, grayscale is so noticeably green that not only does CalMAN show this in the measurements, but also casual observation. I can literally see that the grayscale image is not gray, but an off-green. I’m not quite sure how this happened, but I suspect that this was done in an effort to increase peak brightness as even in the bluest display mode, green is still closely tracking with blue. 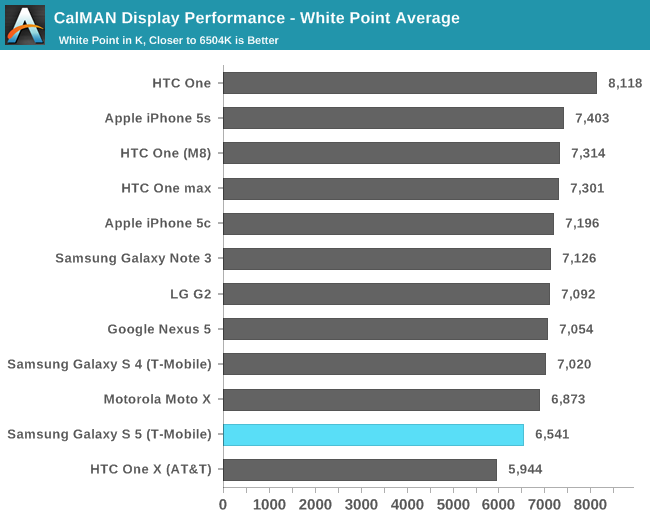 Overall, I’m quite pleased with the display. The AMOLED display in the Galaxy S5 is finally equivalent to LCD displays in color accuracy and peak luminance, areas that LCD used to be the best in. Throw in the incredible contrast that AMOLED has always had and the ability to toggle between wide color gamut and accurate color, and I would say that AMOLED is finally equal, if not slightly better than LCD. With a few more iterations, I wouldn’t be surprised if I were to write that AMOLED is clearly superior to LCD.  Of course, there are some issues such as a noticeable green tint to the display in grayscale and Samsung still needs to improve their clamping of gamut to sRGB for Cinema/Movie mode, but none of these issues seriously detract from the viewing experience.