What Is SATA Express?

Officially SATA Express (SATAe from now on) is part of the SATA 3.2 standard. It's not a new command or signaling protocol but merely a specification for a connector that combines both traditional SATA and PCIe signals into one simple connector. As a result SATAe is fully compatible with all existing SATA drives and cables and the only real difference is that the same connector (although not the same SATA cable) can be used with PCIe SSDs.

As SATAe is just a different connector for PCIe, it supports both the PCIe 2.0 and 3.0 standards. I believe most solutions will rely on PCH PCIe lanes for SATAe (like the ASUS board we have), so until Intel upgrades the PCH PCIe to 3.0, SATAe will be limited to ~780MB/s. It's of course possible for motherboard OEMs to route the PCIe for SATAe from the CPU, enabling 3.0 speeds and up to ~1560MB/s of bandwidth, but obviously the PCIe interface of the SSD needs to be 3.0 as well. The SandForce, Marvell, and Samsung designs are all 2.0 but at least OCZ is working on a 3.0 controller that is scheduled for next year. 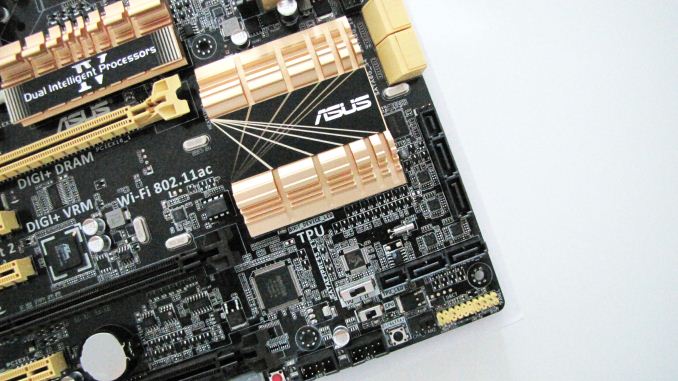 The board ASUS sent us has two SATAe ports as you can see in the image above. This is a similar port that you should find in a final product once SATAe starts shipping. Notice that the motherboard connector is basically just two SATA ports and a small additional connector—the SATA ports work normally when using a standard SATA cable. It's only when the connector meets the special SATAe cable that PCIe magic starts happening. 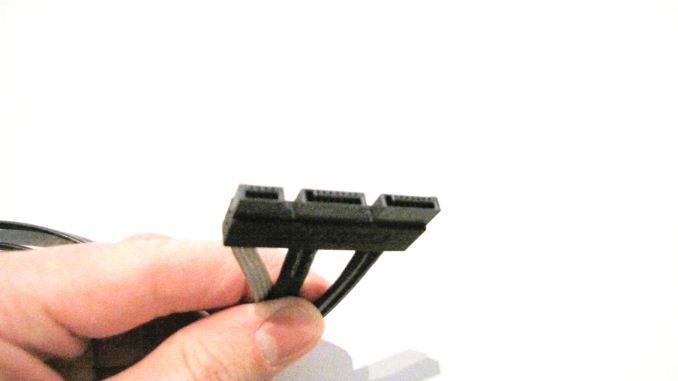 ASUS mentioned that the cable is not a final design and may change before retail availability. I suspect we'll see one larger cable instead of three separate ones for esthetic and cable management reasons. As there are no SATAe drives available yet, our cable has the same connector on both ends and the connection to a PCIe drive is provided with the help of a separate SATAe daughterboard. In the final design the other end of the cable will be similar to the current SATA layout (data+power), so it will plug straight into a drive.

That looks like the female part to the SATA connector in your SSD, doesn't it?

Unlike regular PCIe, SATAe does not provide power. This was a surprise for me because I expected SATAe to fully comply with the PCIe spec, which provides up to 25W for x2 and x4 devices. I'm guessing the cable assembly would have become too expensive with the inclusion of power and not all SATA-IO members are happy even with the current SATAe pricing (about $1 in bulk per cable compared to $0.30 for normal SATA cables). As a result, SATAe drives will still source their power straight from the power supply. The SATAe connector is already quite large (about the same size as SATA data + power), so instead of a separate power connector we'll likely see something that looks like this:

In other words, the SATAe cable has a power input, which can be either 15-pin SATA or molex depending on the vendor. The above is just SATA-IO's example/suggestion—they haven't actually made any standard for the power implementation and hence we may see some creative workarounds from OEMs.