A departure from the normal tech news, but for those not keeping tabs on the phenomenon Twitch Plays Pokemon, it is an interesting social experiment via the Twitch platform.  Users are encouraged to help enter commands into the chat box to control around Red from the first generation of the Pokémon games.  At the peak, an army of 100,000 users were issuing commands to the in-game character where to go.  A multitude of hilariousness has come forth due to this method, as well as frustration as users with the intent of causing havoc also enter the mix (the use of the start button was adjusted, for example).

Aside from issues such as taking six hours to navigate a ledge and accidentally releasing 12 Pokémon in a single day, the extraordinary happened: millions of users at millions of keyboards managed to beat the final sequence.  After 22 attempts at the Elite Four, that combination of users powered though.  Not only this, but the fear of accidentally starting a new game after the end sequence came to naught.

The final moment was captured in all its glory: 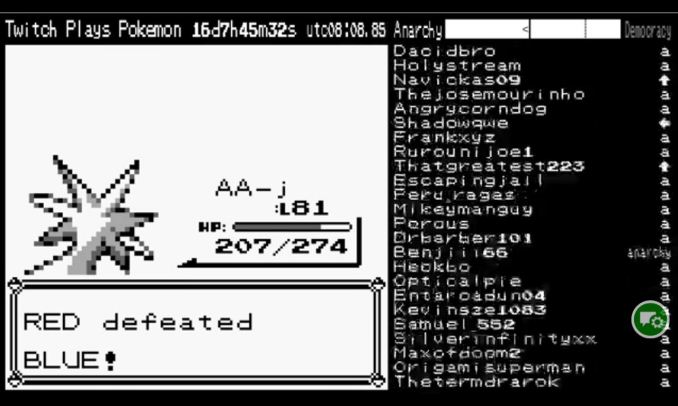 Many thanks to James Croft for the image

The task took 16 days 7 hours 45 minutes, or 391 hours in total.  This is compared to my individual personal best of 13 hours, to put it into perspective.  The final team of Pokémon were as follows:

For a brief update of the adventure, this Google document was maintained throughout the journey.

No news as to the next quest in the ‘Twitch Plays’ series, however the channel states that the next journey should start around midday Sunday GMT.