Last but not least we have our customary look at overclocking performance. With all 3 of our cards being based on the same reference design, we expect to see some relatively consistent results between the cards. At the same time NVIDIA has told us that GTX 750 has some very interesting overclocking properties, and boy they weren’t kidding.

On a quick note, as a GPU Boost 2.0 product, overclocking on the GTX 750 series is not any different than on other GTX 700 series cards. It’s still based on offset overclocking, with the user adjusting offsets for the final overclock. But with that said there are two things to point out. The first is that the power target is limited to 100% on all cards. Because these are sub-75W cards, NVIDIA is not allowing anyone to exceed the card’s default TDP, so you only have as much power to play with as you started with. Second of all, none of our cards had available overvoltage bins. Apparently some cards do, but ours did not, so our voltage bins maxed out at the default bins you see listed.

Finally, all 3 cards have a maximum clock offset of 135MHz. This will be an important fact in a little bit.

As we can quickly see, two patterns emerge. The first is that with every card equipped with 6GHz memory (though we remain unsure which mode the Zotac GTX 750’s is in), each and every card hits at least 6GHz, and sometimes a bit more. With the 128-bit memory bus generally providing the biggest bottleneck for GM107, the fact that there is 12%+ overclocking headroom here is going to be very helpful in feeding the tiny beast that is GM107.

More significantly however is the core overclock. We maxed out every single one. Every card, from the NVIDIA reference card to the Zotac cards, had no trouble overclocking by the full 135MHz to their respective maximum overclocks. The Zotac GTX 750 Ti, having the highest maximum boost clock by default, is technically the winner here at 1310MHz. But at this point everyone is a winner. Going by the maximum boost clock, every card is capable of an 11% core overclock, to go with that tasty 12% memory overclock.

The fact of the matter is that this is not something we normally encounter. Sub-75W cards are not poor overclockers, but they’re not usually strong overclockers either, which is why a 135MHz offset limit makes sense at first glance. But it’s clear that NVIDIA underestimated their own overclocking potential here when setting the specifications for these cards, as there’s seeming some headroom left untapped. Without additional offset room it’s impossible to say just how much more overclocking headroom remains – it may not be very much – but there should be room for at least some additional overclocking.

At this point with cards already in the pipeline we’ll have to take a look at individual cards and see what manufacturers have set their offset limits at. If they have followed NVIDIA’s specifications, then they’ll be equally limited. But hopefully with the launch now behind them, NVIDIA’s partners can work with NVIDIA on making greater offsets available on newer batches of cards. 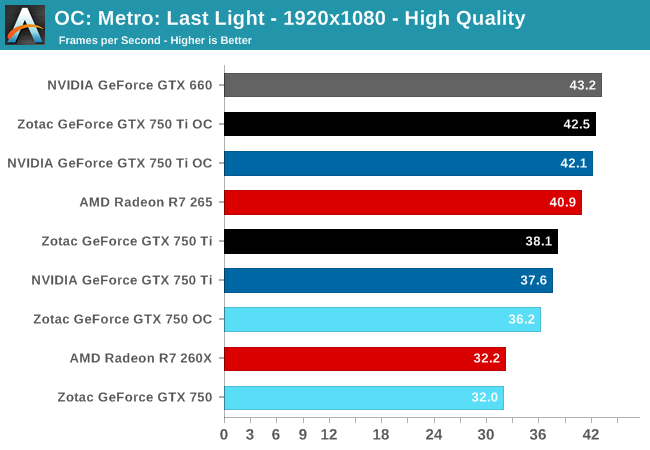 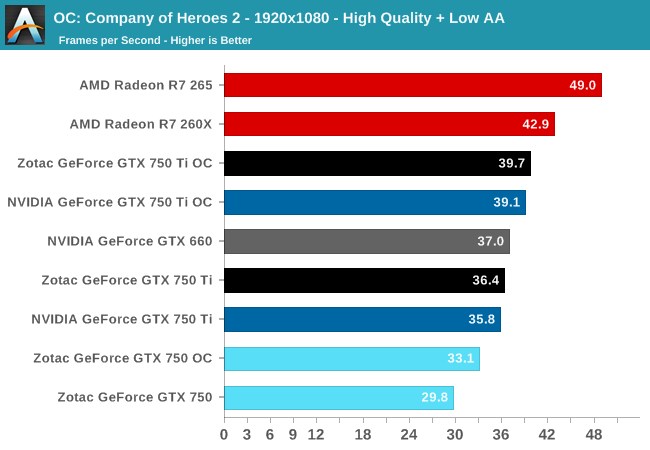 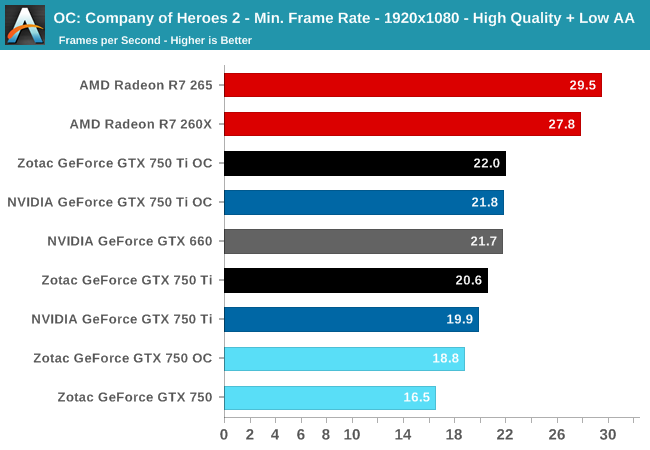 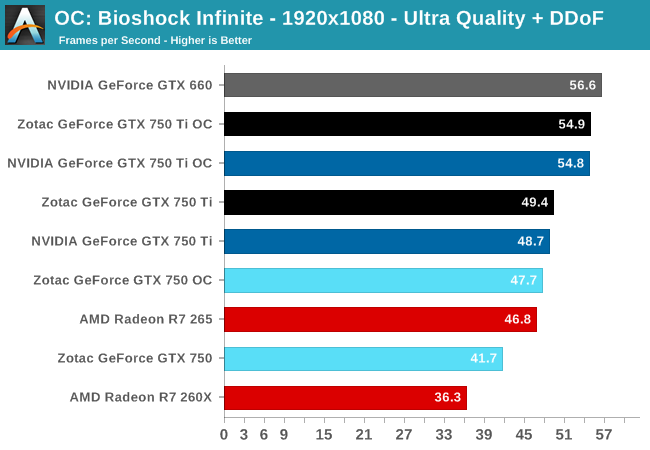 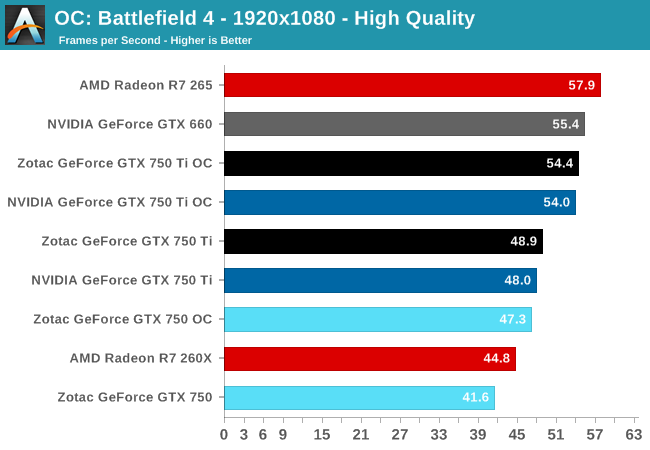 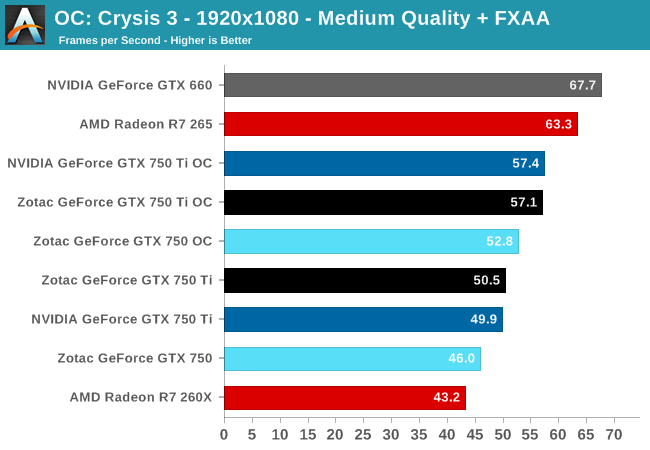 Depending on the game being used, the benefits from overclocking range from 9% to 12%, roughly in-line with our overclocks. For the GTX 750 this is sometimes enough to catch the stock clocked R7 260X, but even with this overclock the GTX 750 Ti will still generally trail the R7 265. 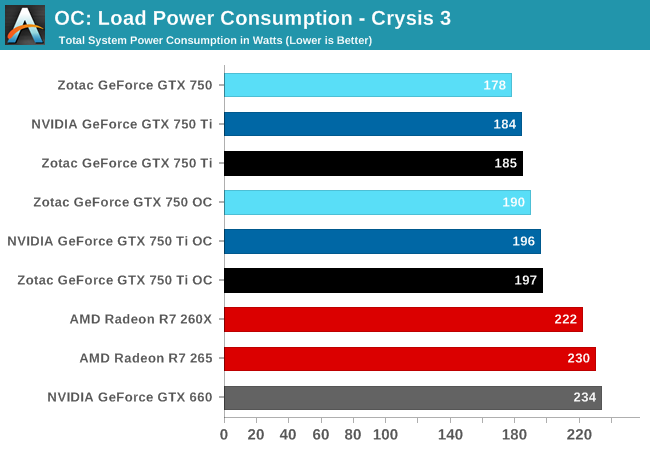 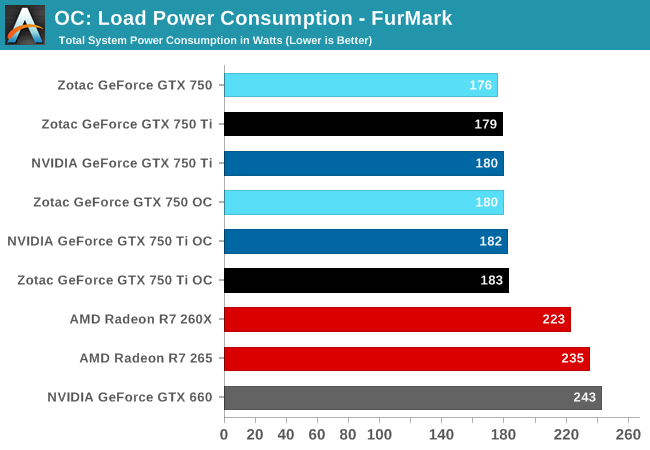 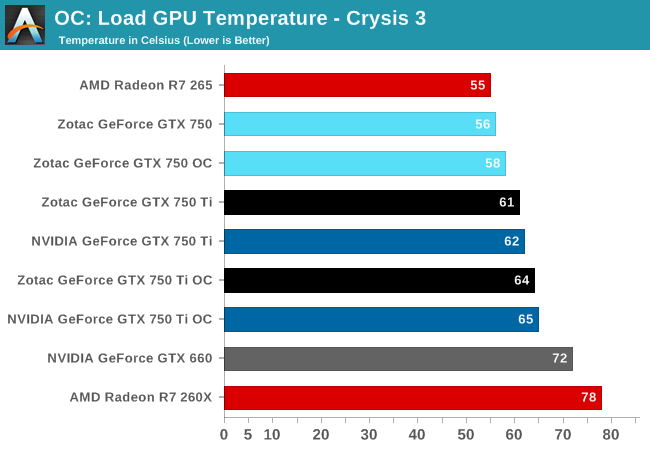 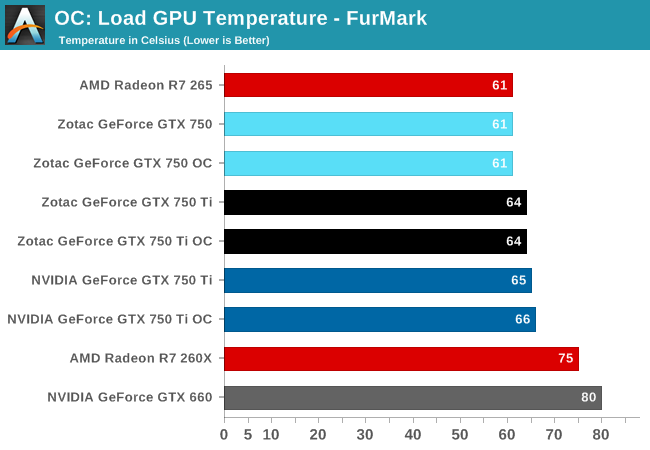 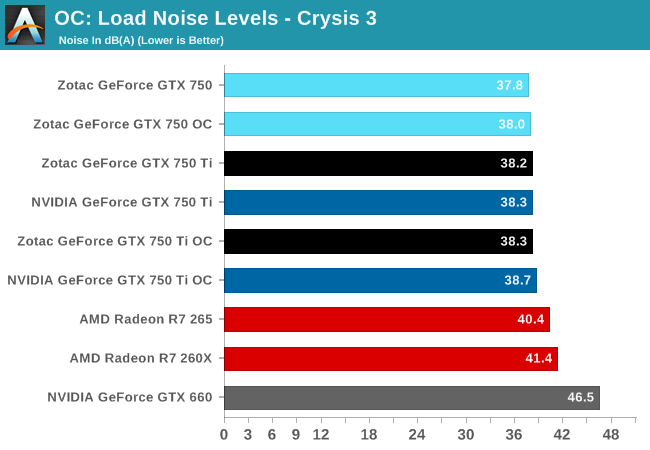 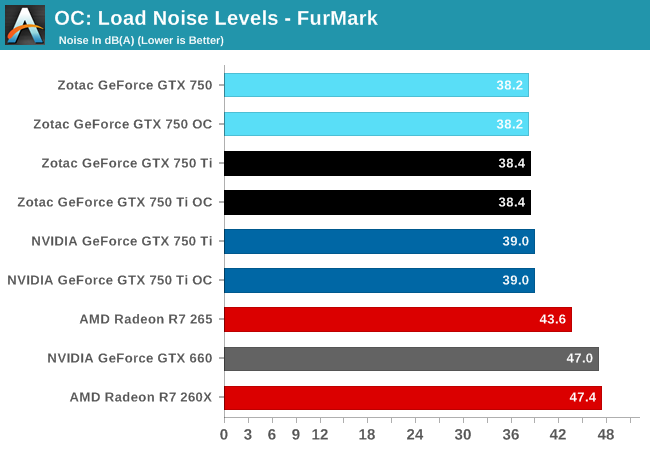 On the other hand, because of the hard TDP limit of 100%, this extra performance is relatively cheap. Video card power consumption moves by only a few watts, and then a few watts of CPU time on top of that. For all practical purposes overclocking can extend NVIDIA’s already incredible performance-per-watt ratio by another 10% with no meaningful impact on noise. Given the consistency of overclocking headroom we’ve seen in our GTX 750 series samples, this is one of those scenarios where overclocking is going to be a reasonable and (relatively) fool proof action to take.