Corsair's Hydro H90 is sort of a bigger brother to the H75. It is the only AIO cooler from Corsair in this roundup that comes in silver packaging, as for some reason the company did not use its usual black-based color theme; most likely because of the all-black color of the cooler itself. Although the bundle is limited to the basics, a manual with installation instructions and the installation-related hardware that is, it is interesting to note that everything, down to the last screw, is black. The included 140mm fan is black as well and is a model with narrow blades and relatively low operating speeds, ranging from 600 to 1500 RPM.

Black, black and more black; these words can easily describe the H90. The radiator is a wider version of the same radiator used by the H75, built for 140mm fans instead of 120mm. Nevertheless, that's over 25% more heat dissipation surface, giving the H90 a significant advantage. The radiator appears well made, yet fin deformations can be easily spotted, therefore it is far from perfect. Smooth, rubber and kink-resistant tubing is used; Corsair does not appear fond of corrugated tubing.

The pump-block assembly is round and very simple. Corsair's logo has been printed on the top of the assembly and there is no lighting or anything else worthy of discussion about this block. It apparently is the simplest design that the OEM (Asetek) offers. Thermal compound is again pre-applied on the copper base of the cooler.

The Hydro H110 is the largest AIO liquid cooler that Corsair currently offers. It comes supplied inside a black cardboard box with a red theme, marking it as one of Corsair's "extreme performance" products. The H110 shares the same bundle as the H90. Inside the box there is a manual with installation instructions, all-black mounting hardware that is supplied categorized inside separate nylon bags, plus two black 140mm fans, also identical to the fan supplied with the H90.

On first sight, it becomes apparent that the H110 is little more than an oversized version of the H90. The radiator has the same thickness but twice the length, allowing for the installation of two 140mm fans on each side, so up to four 140mm fans total in a push-pull configuration. Despite the relatively thin 29mm thickness, the 140mm × 280mm radiator is hefty and will not fit inside many cases, which is the most significant disadvantage of the H110. The rubber tubing is only about 30cm long, which is enough if the radiator is to be installed at the top of a case but not long enough to reach virtually any other viable position. In short, this is a cooler that will need to be matched to a limited case selection.

The same simple round pump-block assembly as that of the H75 is used on the H110 as well. Aesthetics aside, as there is nothing really left to discuss about that, we found it strange that such a small ceramic pump can create a pressure significant enough to cope with the flow resistance of such a large radiator. It is highly likely that the performance of the whole setup will be limited by the low power of the pump. Thermal compound has once again been pre-applied on the copper base of the cooler.

Although it is not the most powerful AIO cooler that Corsair currently offers, the H100i is their pride and joy, therefore it could not be missing from this review. As every other AIO cooler rated as an "extreme performance" product, Corsair supplies the H100i in a black cardboard box with a red color theme. The bundle of the H100i might appeare a little richer than most, but it's not. Aside from the manual with the installation instructions and the mounting hardware, there are the cables required for the use of the cooler and a small advertising leaflet with Corsair's latest products; nothing of particular note. Two 120mm fans with wide grey blades are included, the same fans supplied with the H105 to be exact, which have a speed range of 800 to 2700 RPM.

Out of all Corsair's AIO cooling solutions in this review, the H100i is the one that really stands out. Unlike any of the previous Hydro models discussed in this review, the H100i is not made by Asetek; CoolIT is the OEM behind it. The 120mm x 240mm radiator is similar to that of the H105 but considerably thinner, at only 27mm deep. It is of almost identical design, with wavy aluminum fins soldered on the liquid pass-through channels; however, although it might only be a coincidence, we should note that the number of deformations/imperfections of the fins is notably lower. 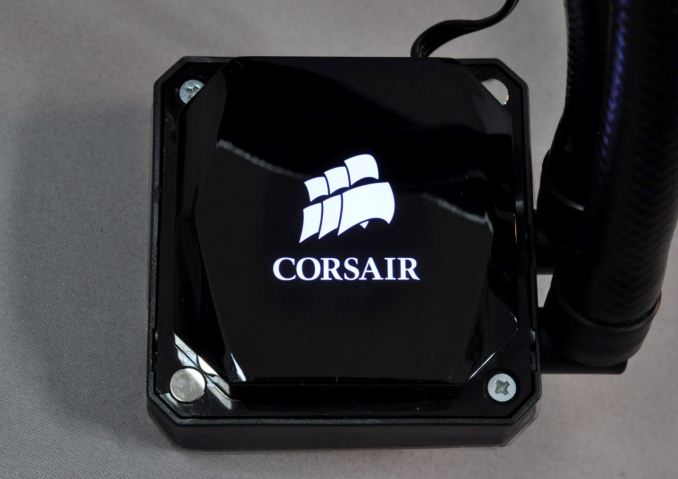 The block-pump assembly is rectangular, with a shiny, highly reflective black top cover. The company logo lights up once the pump is powered on. On the side of the assembly, there are connectors for the fans and the USB interface of the system; this model is compatible with Corsair's Link software, allowing almost complete control via software. We should note that the power connector of the pump is not the usual 3-pin fan header connector but a SATA connector instead, as the assembly needs to power up to four fans, the pump, and all of the electronics of the interface as well. Thermal compound has been pre-applied to the copper base of the assembly, which is very smooth and polished down to a mirror finish (the grainy appearance of the block in the picture is actually due to reflections from the environment).