VideoLogic DigiTheatre DTS: The Ferrari of Sound is here

The system packs into a surprisingly small box, though its weight indicates that it has the mass to back up its power.  It unpacks quickly; the parts list is fairly straightforward.  There are four satellite speakers, a control module with an integrated center speaker, the subwoofer, and finally cabling that includes 4 speaker wires and a multipin control cable. 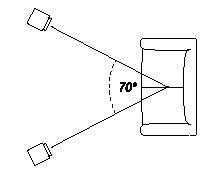 The system comes with placement recommendations designed to help replicate the surround format that DTS program material is mixed for.  It suggests an isosceles triangle (equidistant sides) with the user at the vertex, and an apex angle of 70 degrees.

Finally, there are two placement options for the rear surrounds.  They should be approximately 2 to 3 feet (60-90 cm) above ear level, and placed so that they either shoot straight across the back wall at each other (the recommendation from VideoLogic), or straight along the side walls. 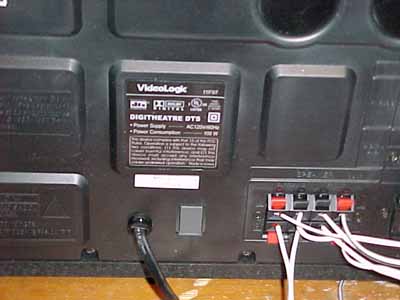 Once the satellites have been placed, they are wired to the amplifier integrated into the subwoofer enclosure.  Four speakers cables are included, two of which are longer and designed for the rear surrounds.  All connections are via spring loaded terminal strips, so in the event that the provided lengths are not long enough, any standard speaker wire can be substituted to achieve the desired length for the four satellites.