Analyzing the Price of Mobility: Desktops vs. Laptops

The other area of performance we want to look at is the GPU/graphics side of the equation. Where CPU performance has really started to level off – only overclocked CPUs or hex-core/octal-core options really hold serious performance advantages over the fastest mobile CPUs, and then only in heavily threaded workloads – the same can’t be said of graphics chips. Part of the problem is power requirements, as high-end desktop GPUs can draw up to 300W under load, which is three times what the most powerful mobile GPUs are rated to draw. The form factor also comes into play, but really I think power is the far more limiting factor.

Of course, there's a big difference in terms of what we do with CPUs vs. GPUs and how we do it. Most CPU-intensive tasks don't easily scale beyond a certain level of multi-threadedness, and some tasks really don't scale at all. The easiest example is anything that requires user input: no matter how fast your CPU gets, Word isn't going to type any faster than your fingers can go – or if you use speech recognition, any faster than you can dictate. Graphics on the other hand is practically infinitely parallel, where we can break things down into smaller and smaller pieces of a screen being rendered/computed by individual GPU cores. Many tasks on the CPU don't scale beyond four or maybe eight cores, but graphics is easy to scale to thousands of cores and beyond. So GPUs can get as large/fast as we can conceivably make them and there are still ways to tap into that performance potential; that's why modern systems typically have GPUs that consume two to ten times as much power as the CPU(s).

Let’s again put together some comparisons, only this time we’re a bit more limited in what we’ve tested with modern GPUs – on our desktop tests, we only have an overclocked GTX 680 and a GTX 780 with all of our gaming results, while on mobile we have a few additional reference points. I’ve also added Bioshock Infinite and Sleeping Dogs numbers for additional GPUs from our GPU 2013 test suite, but that’s only two of the seven titles we’re testing on laptops. We’re now looking at entire systems, but the GPUs are the primary factor in gaming performance. Also note that our reference point (1080p Max Detail, usually with anti-aliasing) is far more demanding than what most gamers actually require, but in terms of a performance discussion at least we can get an idea of where mobile GPUs stand. 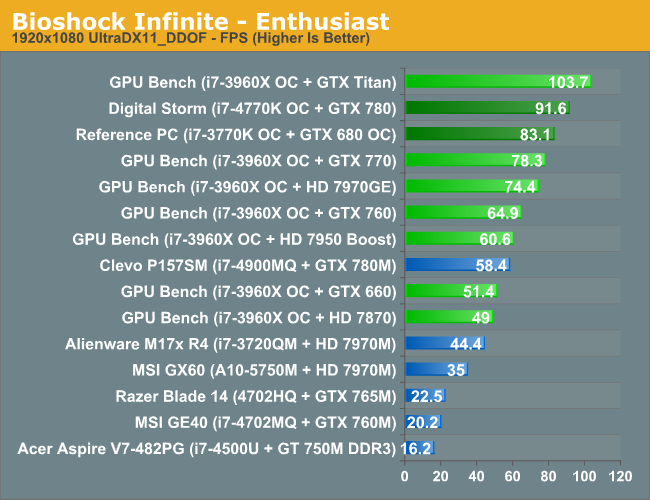 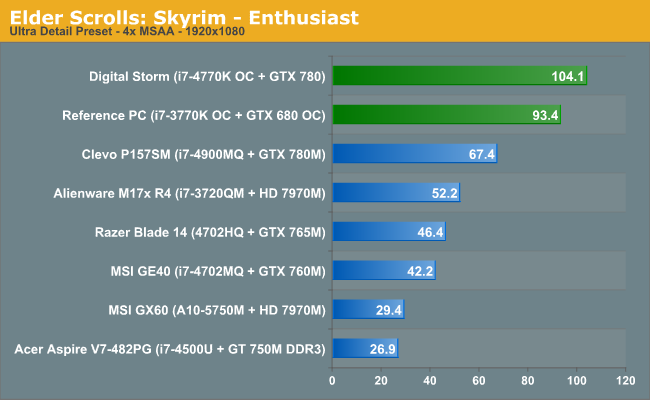 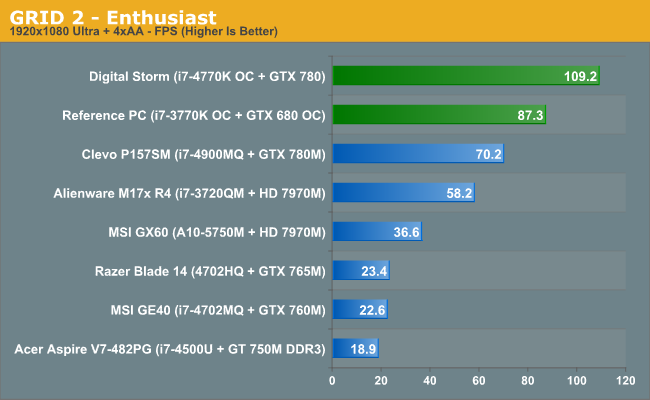 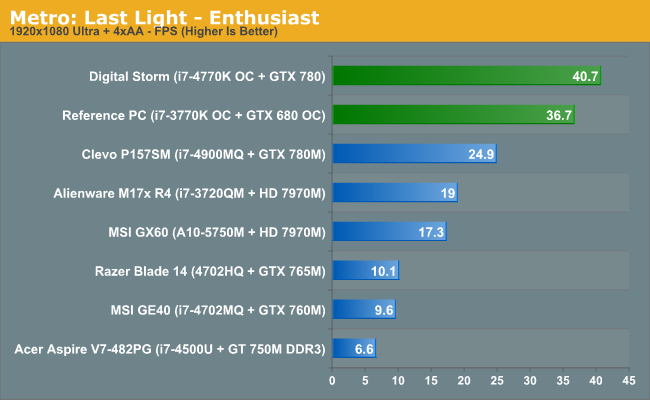 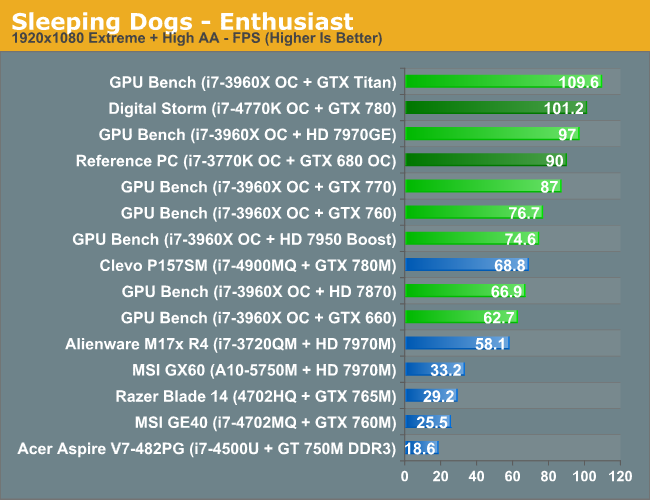 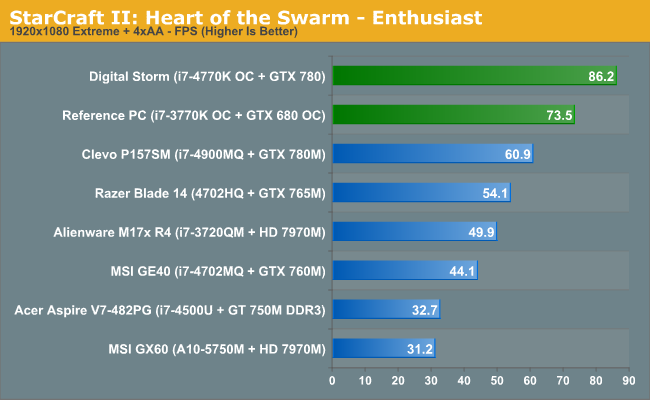 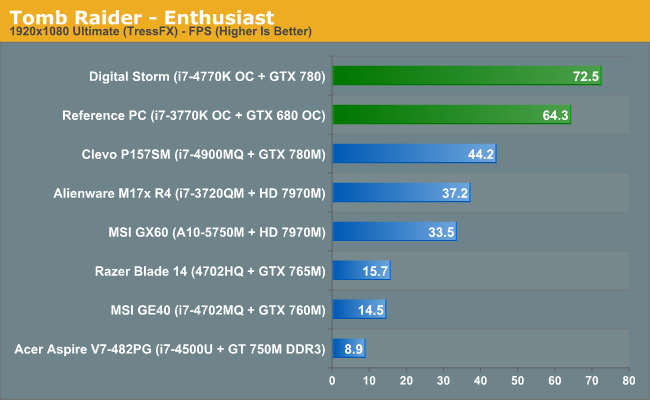 As far as replacing gaming desktop performance with a notebook is concerned, we’re nowhere near close to accomplishing this task. CPU requirements for the vast majority of users have reached a plateau during the past five or so years, but for graphics (games) we can still use pretty much all the horsepower available. The fastest mobile GPU we have right now, the GeForce GTX 780M, ends up delivering performance that falls roughly half way between the GTX 660 and GTX 760, or if we look at the Digital Storm system Dustin tested, it offers 60-70% of the performance of that desktop. Moving down to the lower performance mobile GTX parts like the GTX 765M, we haven’t tested any desktop GPUs in recent history that are anywhere near that slow – even the GTX 660 tends to be more than twice as fast as the GTX 765M and the GTX 560 Ti is still 50% faster. Drop one level further to the GT 750M (DDR3) and performance is about 60-80% of the GTX 765M! It’s not that you can’t game on a GT 750M or GTX 765M, but you’ll definitely need to drop the details down from max and turn off anti-aliasing. Finally, no matter what you do with a notebook, you’re not going to match the performance of the fastest desktop GPUs – the GTX Titan nearly doubles the performance of the GTX 780M, and even SLI GTX 780M isn’t likely to beat a Titan on a consistent basis.

Looking at pricing is also illuminating. Most notebook vendors charge around $650 (give or take) for a second GeForce 780M on the Clevo P370SM, compared to the desktop GTX 760 (which has slightly higher performance) that can be purchased for $250. Meanwhile, the desktop GTX 780M sells for the same $650 price as the GTX 780 while offering only 60-70% of the performance you get from the desktop GPU; the GTX 680 and GTX 770 have the same number of CUDA cores (1536) and go for $400, delivering superior performance at a substantially lower cost. The pattern continues as we move down the product stack; the slowest desktop Kepler, the GeForce GT 630, is a $65 card that has slightly higher clocks than the GT 750M, never mind the GT 730M and GT 740M, but the GT 730M is typically a $70 upgrade on a notebook. The GTX 765M has the same number of cores as the $130 GTX 650 Ti but with lower clocks; it reputedly sells for close to the same price to laptop OEMs as the desktop GTX 760 we mentioned as a performance equivalent of the GTX 780M.

Of course, where you can easily add a GPU to most desktops, with laptops you’re basically stuck with whatever you initially purchase. I noted in the Gaming Laptop Guide last month that the lowest price I could find for a notebook with a GTX 780M ends up around $1750 (including the OS with a 1TB HDD). For equivalent performance (more or less), we can take the desktop we listed above and add a GTX 760 GPU, with a slight PSU upgrade as well just to be safe. Here’s what we end up with:

Opting for a gaming notebook thus carries a hefty price premium, nearly doubling the price of a similar performance desktop. Yes, the notebook still gives you a battery, display, keyboard, touchpad, and speakers as part of the package, but if you already have those for an existing desktop they’re not really necessary. The price premium for high-end gaming notebooks has certainly come down from the 2x-3x we used to see (though you can still get to that range with SLI notebooks), but we’re nowhere near parity like we are on the CPU side of things. As an alternative, desktop GPUs are also able to hit much higher performance levels at a similar cost to a high-end gaming notebook.

Given the various options, many people have concluded that it’s far better to have a decent gaming desktop like the one above and then to spend another $500-$1000 on a good laptop for when you need to go mobile. That’s generally my recommendation as well – for all the gaming notebooks I’ve reviewed over the years, I still turn to my desktop system 95% of the time when I’m looking to play a game. On the other hand, not everyone wants to worry about having two computers and syncing data between them, and there are also space limitations to consider. Finding a spot for a 10 pound gaming notebook in a college dorm is easy enough; finding space for a gaming desktop with display, speakers, keyboard, and mouse can be a bit more difficult. And if you’re regularly on the road and want to take your games with you, you’ll need the laptop regardless.

There’s no right answer for how to do things, of course. Some people love gaming notebooks and others don’t see the point. But while you can certainly make a case for typical notebooks/laptops now being close to price parity with similar performance desktops, once you add gaming into the mix you’ll need to pay the mobility piper his due.