A Quick Look at the Moto X - Motorola's New Flagship

Though the UI for the Moto X is indeed stock android basically everywhere ($12.5 Billion later, Google finally killed Motoblur), there are two specific software customizations on the Moto X which are chief differentiators. The first of which is touchless control, which is essentially a combination of always-listening voice command, and Google Now. 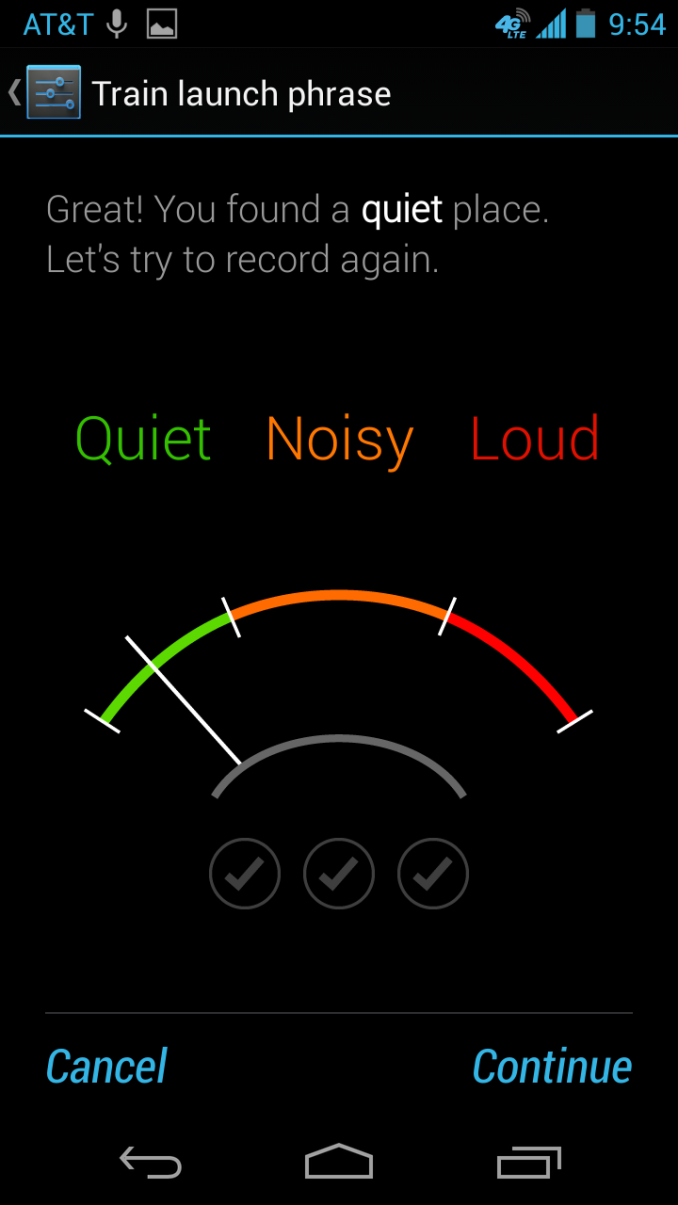 There’s a training initialization which asks you to say “OK Google Now” in a very quiet room three times (I had to lock myself in a bathroom for the meter to register quiet enough) to enable the feature. After that, saying OK Google Now works well and powers on the phone to this menu. Users cannot change the OK Google Now keyphrase to something custom. 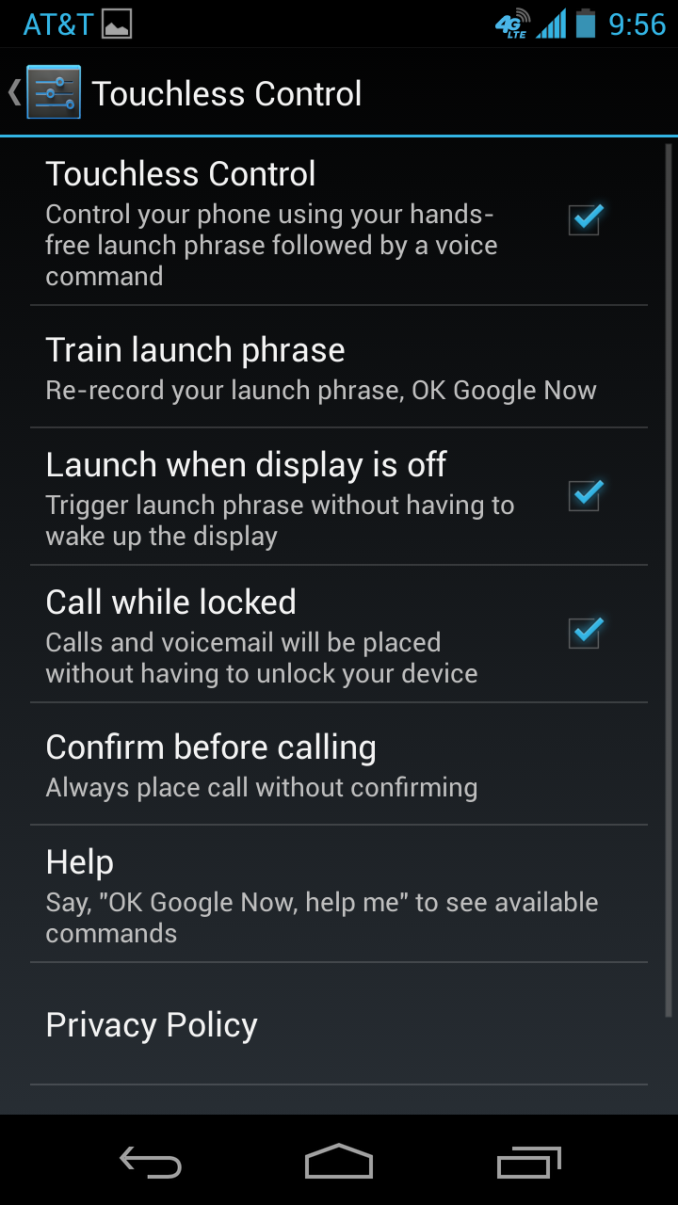 For this system, Motorola uses a natural language processor (NLP) of custom design that I haven’t quite tracked down yet. This controller constantly listens on the 3 microphones onboard Moto X for the “OK Google Now” keyword, then wakes up the AP and enables the Google Now prompt. Motorola says it went with this solution to enable always-on voice without killing battery life from running the main AP all the time (which does make sense). It works surprisingly well, maybe even too well, as even after training saying “OK Google Now” can turn on every Moto X around you. Just something to be aware of. 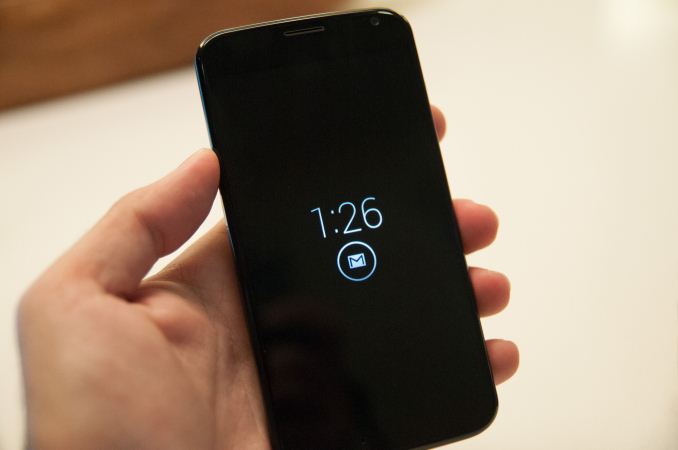 Active display is Motorola’s solution to the constant device checking and glancing that users do to find out why a notification fired. It’s a view that sits above the lock screen and displays the last few notifications and enables you to dive into the appropriate app that triggered it. Information just appears on the display when it’s in an off state, breathing in and out when the device is face-up on a surface. Otherwise, flipping the Moto X from face down to face up will bring up the display – I can’t screenshot it, this seems to live outside Android entirely.

To get a preview, you can touch the notification, and then drag up. Dragging left or right clears notifications. Dragging up into a notification will dive into the appropriate application. 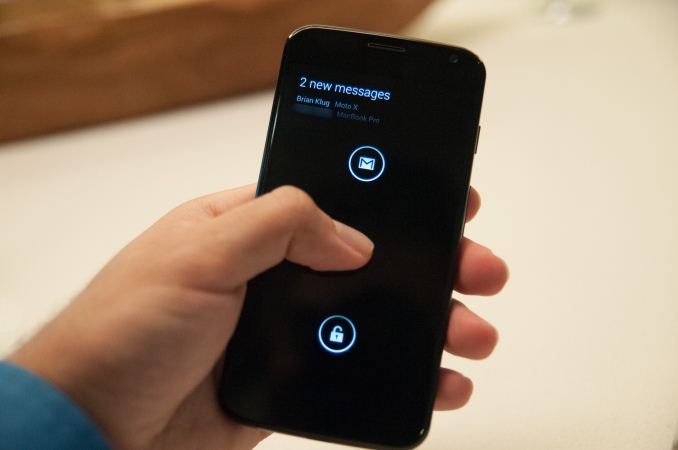 There are privacy settings to enable or disable how much information you can have displayed on the active display notification screen so this doesn’t bypass if you have a lock screen on purpose.

I leave my phone face-up on my desk instead of face down to prevent screen scratches, where and the Active Display notification screen pulses periodically with the time and when notifications come in. It works well, I just need to spend time with it. 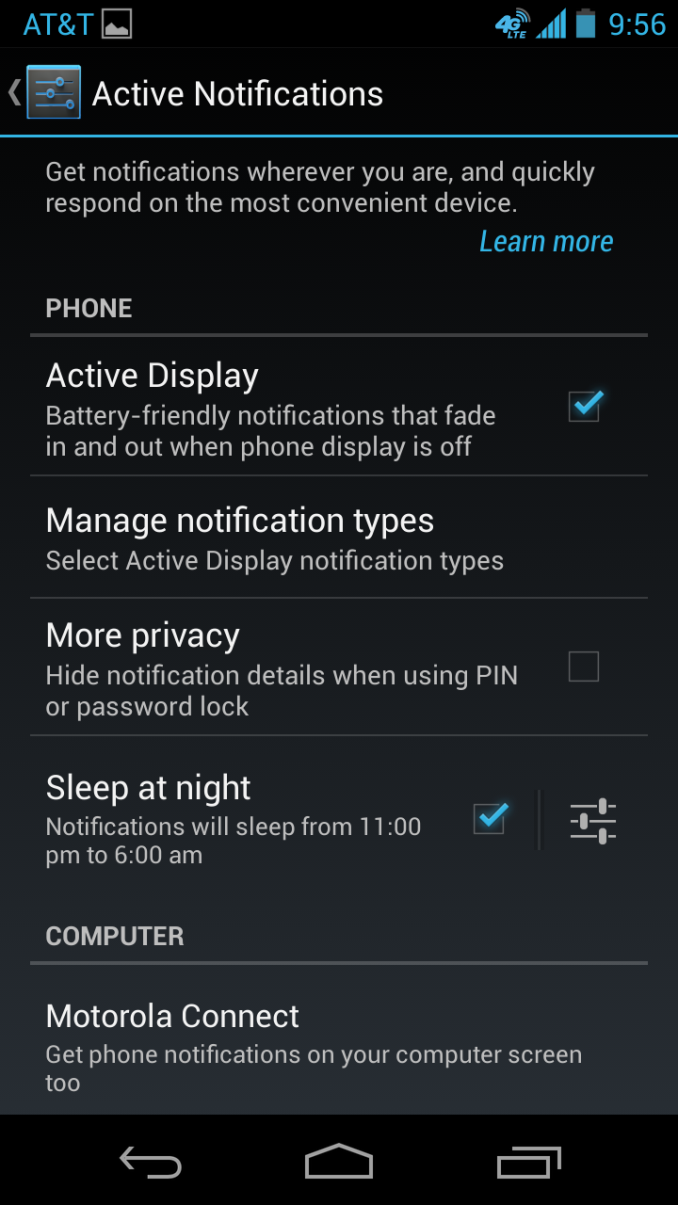 The other contextual-powered feature is quick capture, which is the quick enter camera gesture. Hold the Moto X, flick your wrist like a screwdriver, and you’ll get popped into Motorola’s camera UI for the Moto X.

The UI is very simplified and makes some interesting choices. Tap to focus and expose is disabled by default – instead tapping anywhere captures a photo. Tap to focus can be re-enabled in the settings, which fly out from the left, but now tapping anywhere focuses on that region and captures immediately. I’m not sure if I like this change. The camera sensor is 16:9, and the preview is likewise 16:9, so there’s at least no cropping going on. 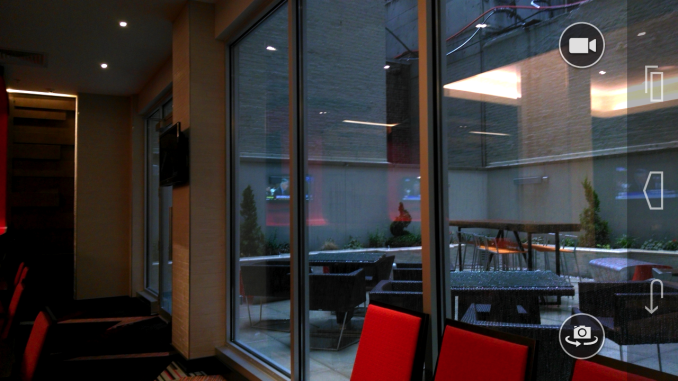 The UI includes HDR, flash control, tap to focus enable/disable, slow motion video (720p60), panorama, location tagging, shutter sound, and the flick gesture enable/disable. What’s missing is photosphere support, unfortunately. Dragging right gets you into the gallery, and there are buttons for changing to the front facing camera and taking video instead of photos. This is sort of a tweaked Android 4.2/4.3 camera UI, with stuff just moved around and photosphere removed. 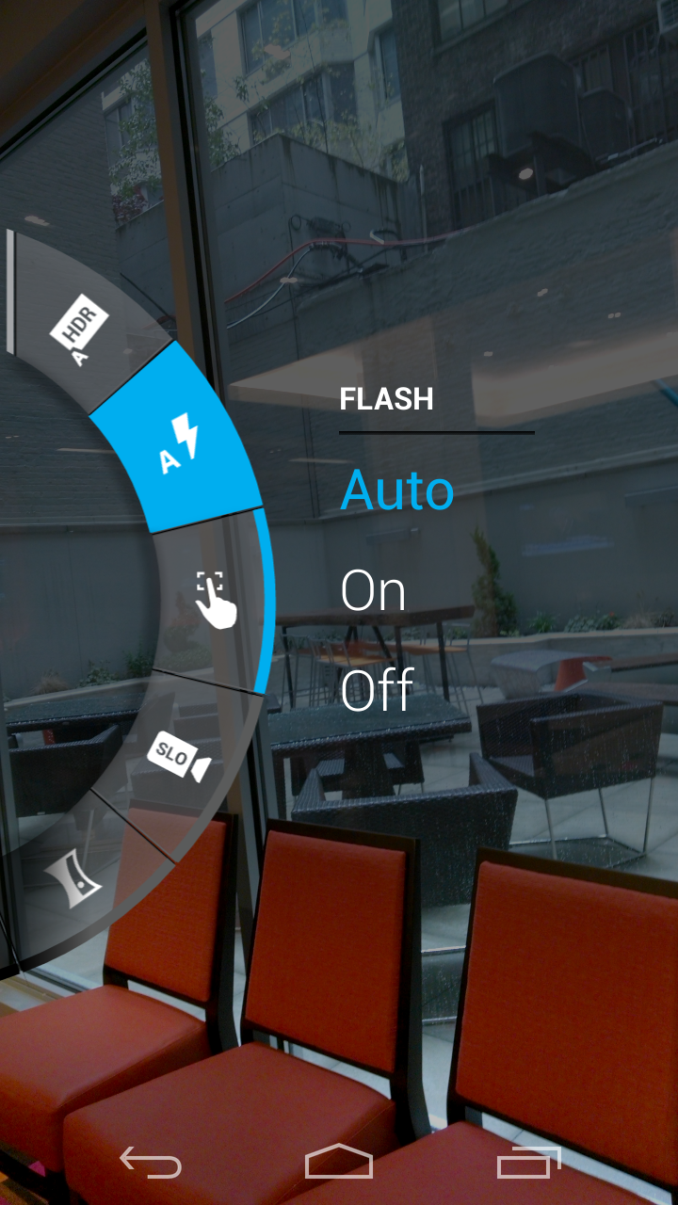 I’ve done some digging around and believe that Motorola is using a TI MSP430 microcontroller for its contextual processor, as this seems to do at least sensor fusion for the different situational positions. I’m not sure if this also powers the active display functions but wouldn’t be surprised if it did.