All NAND trends towards lower performance as we move down to smaller process geometries. Clever architectural tricks are what keep overall SSD performance increasing each generation, but if you look at Crucial's M500 you'll see that it's not always possible to do. Historically, whenever a level of the memory hierarchy got too slow, the industry would more or less agree to insert another level above it to help hide latency. The problem is exascerbated once you start talking about TLC NAND. Samsung's mitigation to the problem is to dedicate a small portion of each TLC NAND die as an SLC write buffer. The feature is called TurboWrite. Initial writes hit the TurboWrite buffer at very low latency and are quickly written back to the rest of the TLC NAND array.

Since the amount of spare area available on the EVO varies depending on capacity, TurboWrite buffer size varies with capacity. The smallest size is around 3GB while the largest is 12GB on the 1TB EVO:

I spent some time poking at the TurboWrite buffer and it pretty much works the way you'd expect it to. Initial writes hit the buffer first, and as long as they don't exceed the size of the buffer the performance you get is quite good. If your writes stop before exceeding the buffer size, the buffer will write itself out to the TLC NAND array. You need a little bit of idle time for this copy to happen, but it tends to go pretty quickly as it's just a sequential move of data internally (we're talking about a matter of 15 - 30 seconds). Even before the TurboWrite buffer is completely emptied, you can stream new writes into the buffer. It all works surprisingly well. For most light use cases I can see TurboWrite being a great way to deliver more of an MLC experience but on a TLC drive.

TurboWrite's impact is best felt on the lower capacity drives that don't have as many NAND die to stripe requests across (thus further hiding long program latencies). The chart below shows sequential write performance vs. time for all of the EVO capacities. The sharp drop in performance on each curve is when the TurboWrite buffer is exceeded and sequential writes start streaming to the TLC NAND array instead: 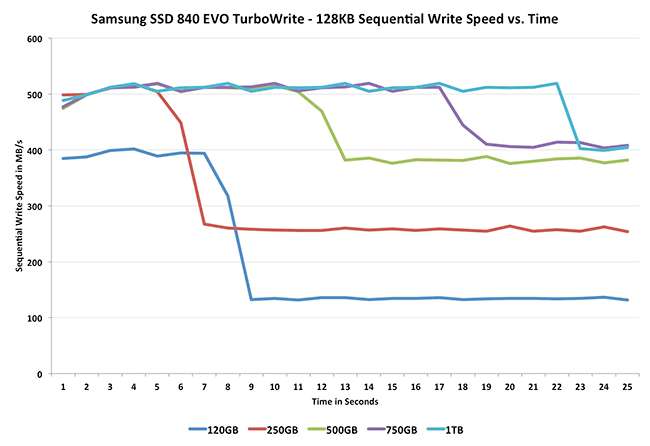 On the 120GB drive the delta between TurboWrite and standard performance is huge. On the larger drives the drop isn't as big and the TurboWrite buffer is also larger, the combination of the two is why the impact isn't felt as muchon those drives. It's this TurboWrite buffer that gives the EVO its improvement in max sequential write speed over last year's vanilla SSD 840.

Endurance: Not a Problem Even at 19nm RAPID: PCIe-like Performance from a SATA SSD
Tweet
PRINT THIS ARTICLE
Comments Locked