We wrap up our performance evaluation with a look at battery life and LCD quality, along with temperatures and noise. Here we get one winner and a few losers. It’s really unfortunate, as a better LCD could have warranted a reward of some form. We’ll start with the good news first, though: battery life is quite excellent, all told. Our Light, Medium, and Heavy battery life tests range from surfing the Internet to intense browsing while listening to music, with the Heavy test adding in a constant 1MBps download via local FTP with intense web surfing and 12Mbps 1080p H.264 playback. Gaming off the mains will be even more demanding, but otherwise the results below should represent a typical result as well as worst-case. The LCD was set for ~200 nits, which on the MSI GE40 ended up being 80% (two steps down). 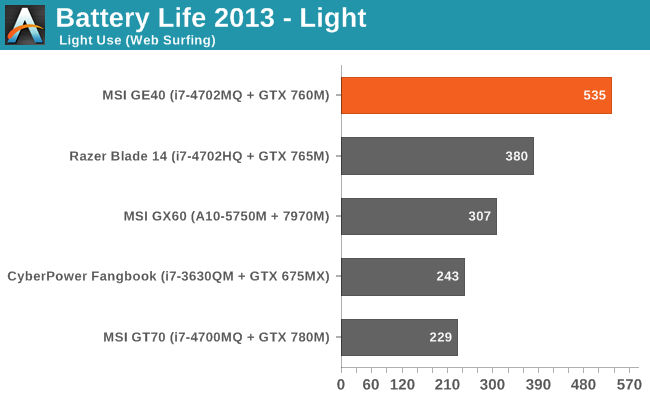 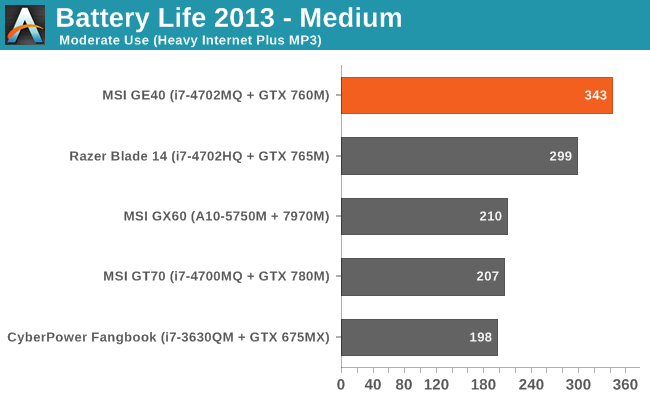 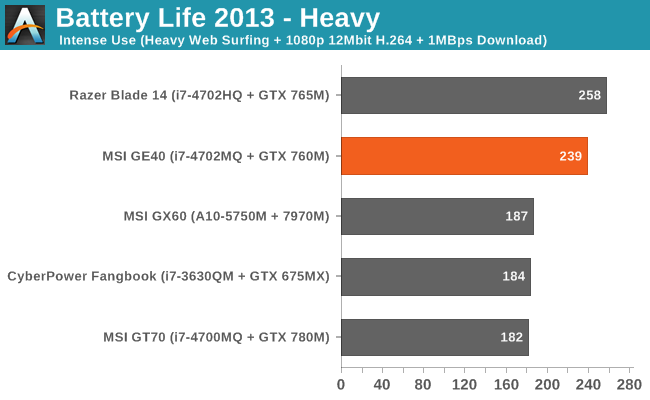 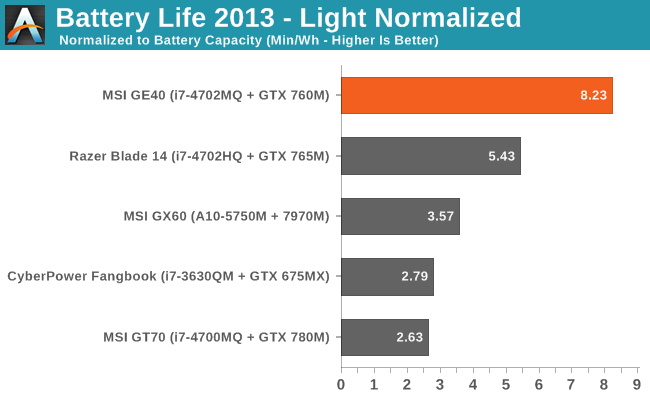 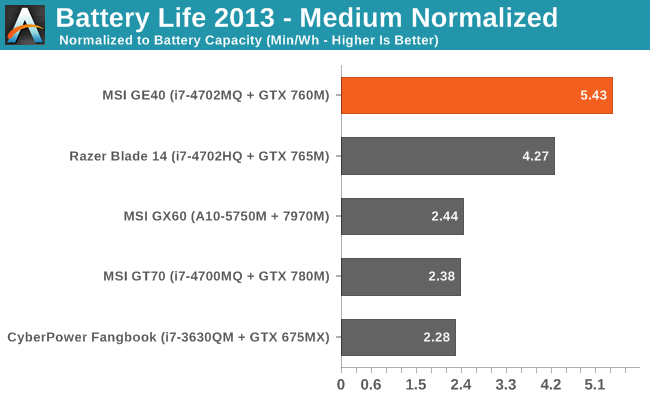 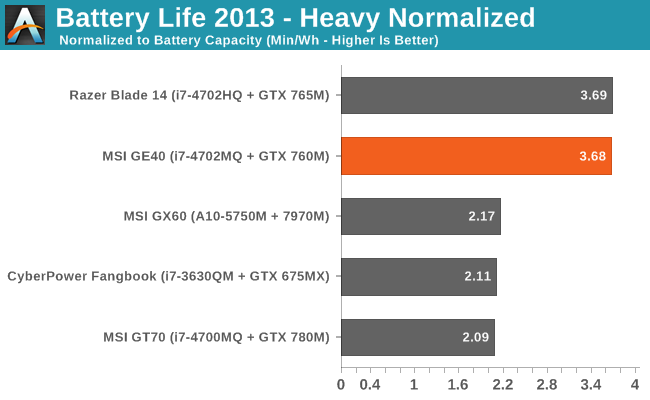 Haswell is a mobile-focused architecture, and it shows. It may not be much faster than Ivy Bridge in many cases, but seeing a viable gaming notebook pull off nearly nine hours of useful battery life is quite impressive. That drops quickly as you put a heavier load on the GE40, with around 5.75 hours of moderately heavy use and four hours of heavy use possible. If you just want to watch 1080p H.264 video, you can expect closer to five hours of battery life. Normalized battery life ends up equaling the Razer Blade in our heavy test while soundly trouncing all contenders in the light and medium tests.

But what about gaming on battery power? I ran a test as requested in the comments, and the results aren't particularly promising. First, battery life while gaming (running Skyrim) ended up at 104 minutes, still well short of the two hour mark. What's potentially worse is that even with all the settings tweaked for higher performance, NVIDIA's drivers (or MSI's BIOS/firmware) throttle GPU performance while on battery power. Plugged in Skyrim was running at a steady 60-70FPS, but once the power cord was unplugged it dropped down to 30-32FPS (with some dips into the low 20s on occasion). It looks like the notebook is shooting for 30FPS and no more when on battery power; I'll see if I can coax any better performance out of it in the morning, but even in the reduced performance mode you're still not going to be gaming for long while unplugged.

“What good were eyes to me? Nothing I could see could bring me joy.”

Perhaps that’s a bit too strong, but if you take the poor LCD from the Razer Blade 14 review and then limit the maximum brightness to 250 nits instead of 450 nits, you have the GE40’s LCD. Viewing angles are as bad as you’ll ever get with TN panels, and while it’s still possible to play games and not feel too bad, any photo editing is best done elsewhere. Here are the numbers: 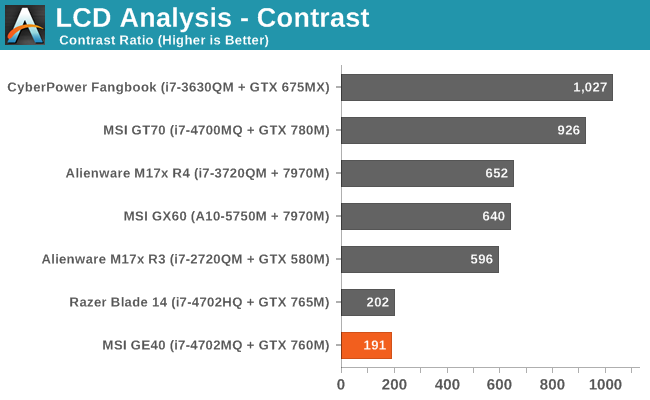 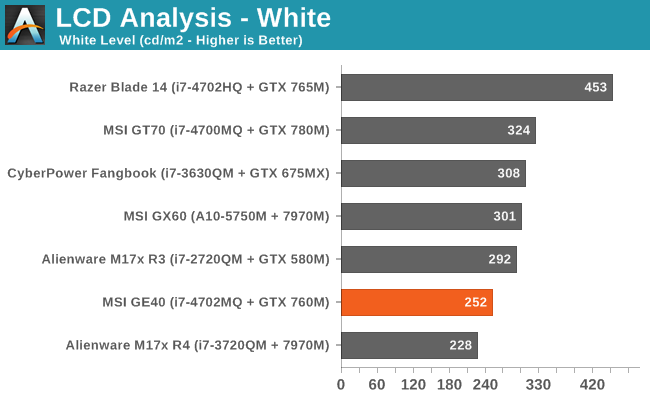 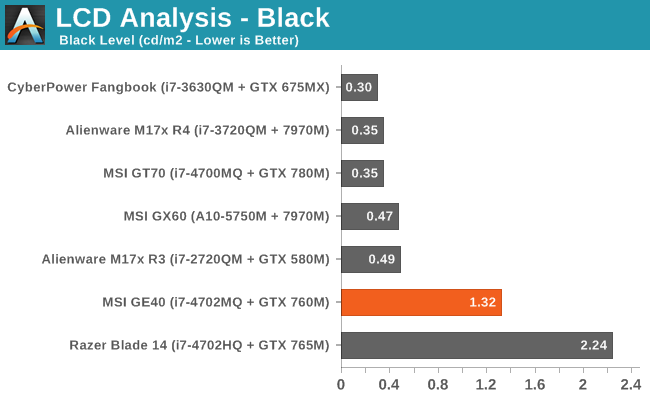 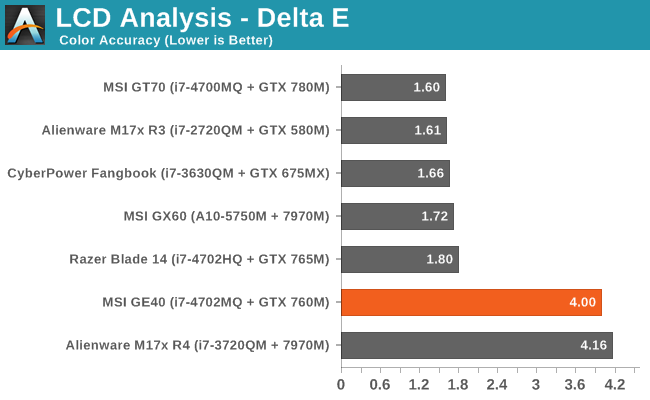 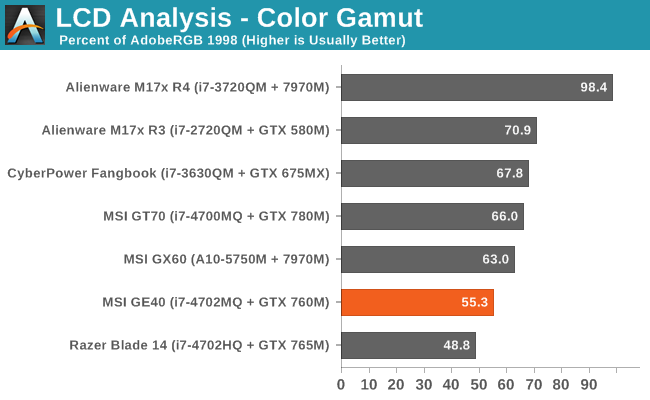 A contrast ratio below 200:1 is simply unacceptable in today’s market. This is the sort of display that will continue to drive users over to tablets. I do worry that something has gone wrong with my i1 Display2 colorimeter, as the DeltaE on the GE40 and M17x R4 are both much higher than I’d expect, so take those figures with a grain of salt until I can confirm my colorimeter is still working, but even if it’s off by a factor of two there’s nothing good to say. Average color accuracy without calibration is far worse, of course: I measured 17.4 average dE with the best result being 8.4 and the worst being 25.5—basically the same as what you see with many Android tablets I guess. Color gamut is also low, but really the contrast needs to be improved before we even worry about color gamut or accuracy.

Too Hot to Handle?

I ran some extended stress testing of the GE40, just to see what might happen. Under a full load, it took about ten minutes before the CPU and GPU had reached more or less equilibrium. It’s a bit warm here in WA right now, and I don’t have AC, so ambient temperatures were around 80-85F (27-29C), but even so the maximum CPU temperature of 98C is a concern. The GTX 760M didn’t have as much trouble, maxing out at a still-toasty-but-not-horrible 80C.

In practice, these figures aren’t even unusual; an extended session of Metro: Last Light looping our Value settings at 1600x900 hit 98C/84C on the CPU/GPU (average temps of 95.5C/81.4C), so the GPU actually got a bit hotter when the CPU wasn’t fully loaded. Idle temperatures at least are good, sitting around 46C/34C, and the surfaces of the GE40 for the most part are not too hot—one of the benefits of using plastic on the bottom of the chassis. The only real hot spot is on the left hand side near the exhaust, as you would expect. Still, the cooling is definitely pushing the limits of what we would deem “acceptable”—a year or two down the road when the cooling fins have a fine layer of dust and grime on them and we could easily be talking about an overheating notebook.

We haven’t had a lot of time with Haswell so far, so it’s difficult to say whether the temperatures in the upper 90s that we’re seeing under sustained load are normal or problematic. It’s very hard to get good thermals, high performance, and low noise levels in the same package, particularly if that package is less than an inch thick like the GE40. We’ve seen that thermals are definitely pushing the limit of what we’re comfortable with, but noise isn’t all that great either. At idle, we measured noise levels of 34.7dB while pretty much any reasonable gaming workload increased that to a maximum of 44.4dB; even under light loads (e.g. surfing the web), the fan will often spin up a bit to the 37dB range. Our full-load stress testing didn’t increase the noise, and even covering the exhaust with my hand didn’t create any additional noise (though that was mighty hot!), so the fan is basically topped out when gaming.