In 2010, with Clarkdale and Arrandale, Intel went from a 3-chip platform solution (CPU, IOH/MCH, ICH) down to a 2-chip platform (CPU + PCH). With Haswell, we see the first instantiation of a single-chip Core platform.

With the 8-series chipset, Intel moved from a 65nm process on the 7-series chipset to 32nm, skipping 45nm entirely. An older, less mobile-focused Intel would try to keep its chipsets on the oldest, economically sensible node possible, but these days things are different. The move to 32nm cuts TDP down considerably. Intel hasn’t publicly documented the power consumption any of its ultra mobile chipsets, but if we look at QM77 to QM87 we see a 34% decrease in TDP. 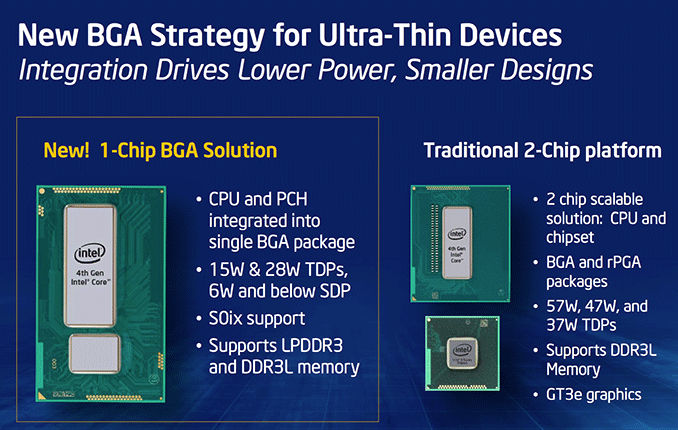 In Haswell desktop and standard voltage mobile parts, the 8-series chipset remains a an off-chip solution in a discrete package. With Haswell ULT and ULX (U and Y series SKUs), the 8-series PCH (Platform Controller Hub) moves on-package. Since it’s on-package, the TDP of the PCH is included in the overall TDP of the processor.

Intel also changed the interface between the CPU and PCH to a new on-package interface instead of DMI. Presumably Intel’s OPI is designed for much lower power operation.

Although PCIe support remains on the PCH (6 PCIe 2.0 lanes), there’s no external PCIe interface from the CPU itself. Any hopes for pairing a meaningfully high performance discrete GPU with Haswell ULT are dead. We didn’t see a ton of Ivy Bridge Ultrabooks with discrete GPUs, but the option simply won’t exist this time around. All of the sudden the creation of Intel’s 28W Haswell ULT with GT3 graphics makes a lot more sense. Haswell ULT lacks native VGA support. Update: NVIDIA tells me that it fully supports running a dGPU off of a x4 connection to the PCH. It's not the ideal solution, but discrete GPUs will still technically be possible with Haswell ULT.

Intel adds SDIO support. USB 3 and 6Gbps SATA are both there as well (although with fewer max ports supported compared to the desktop PCH, up to 4 and 3 respectively). There’s also a lot more sharing of bandwidth between individual PCIe lanes and USB/SATA. These limits shouldn’t be an issue given the port/drive configuration of most Ultrabooks.