To start, we want to thank the many manufacturers who have donated kit for our test beds in order to make this review, along with many others, possible.

Also many thanks go to the manufacturers who over the years have provided review samples which contribute to this review.

In order to keep the testing fair, we set strict rules in place for each of these setups. For every new chipset, the SSD was formatted and a fresh installation of the OS was applied. The chipset drivers for the motherboard were installed, along with NVIDIA drivers then AMD drivers. The games were preinstalled on a second partition, but relinked to ensure they worked properly. The games were then tested as follows:

Civilization V: One five minute run of the benchmark mode accessible at the command line, at 1440p and max settings. Results produced are total frames in sets of 60 seconds, average taken.

How to Read This Review

Due to the large number of different variables in our review, it is hard to accurately label each data point with all the information about that setup. It also stands to reason that just putting the CPU model is also a bad idea when the same CPU could be in two different motherboards with different GPU lane allocations. There is also the memory aspect to consider, as well as if a motherboard uses MCT at stock. Here is a set of labels correlating to configurations you will see in this review:

First is the name of the CPU, then an optional + identifier for MCT enabled motherboards. (CP) indicates we are dealing with a Bulldozer derived CPU and using the Core Parking updates. Inside the parentheses is the PCIe version of the lanes we are dealing with, along with the lane allocation to each GPU. The final flag is if a PLX chip is involved in lane allocation.

All the system setups below have the following consistent configurations points:

The Beast is a special machine put together to help with the review as a result of various hardware coming into my possession all at the same time. The core of the system is an EVGA SR-2 motherboard, the best and last dual processor motherboard to deal with overclockable Xeon processors. This is paired with a couple of X5690 Xeon processors, the highest clocked Westmere Xeon that Intel offers, and many thanks to Gigabyte for loaning these to us for a pair of reviews. I went and purchased a pair of Intel Xeon socket 1567 coolers for the system, which have a 2U z-height restriction but are copper piped and cooled by powerful (and loud) delta fans. These provided enough cooling power to push the Xeons from 3.43GHz to 4.6GHz during some overclocking attempts, so are more than adequate for the job at hand (if you can put up with the noise). 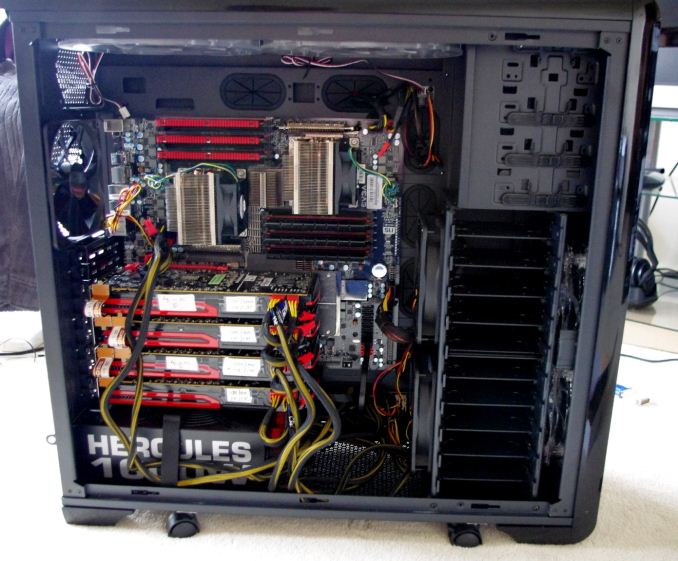 Our system is paired with some high quality DDR3 Hyper memory, once famed for its overclocking prowess but due to frequent deaths from high voltage, is now relegated as a memory for overclockers. However at stock this memory performs great, often in the region of DDR3-2000 C7, so our memory kits are well primed for this setup.

Of course a full system is nothing without a case and power supply to help justify a build. With the motherboard being absolutely huge, no standard case would take it – only large cases designed for desktop-based server 2P motherboards are adequate. Luckily there is one case which is selling well, and Dustin reviewed recently – the Rosewill Blackhawk Ultra. Aside from the weight, this case had no issues with installing the motherboard; it could easily fit in another 10 HDDs, four optical bays, and any major GPU setup you could possibly think of – with plenty of fans just for good measure. Read Dustin’s review for a more thorough analysis, but I have some good shots of the system and motherboard installed for you: 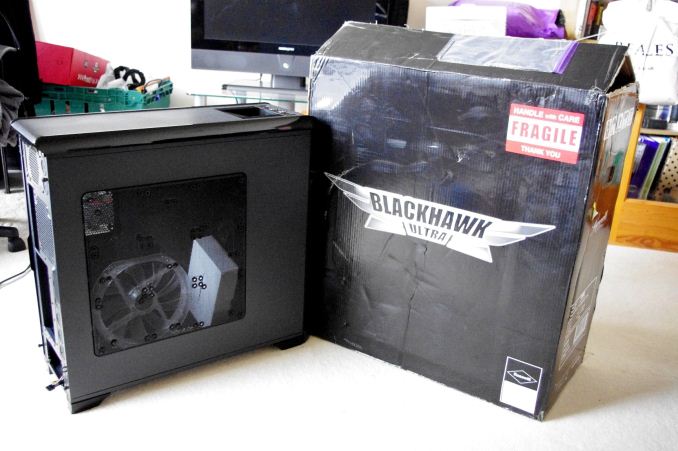 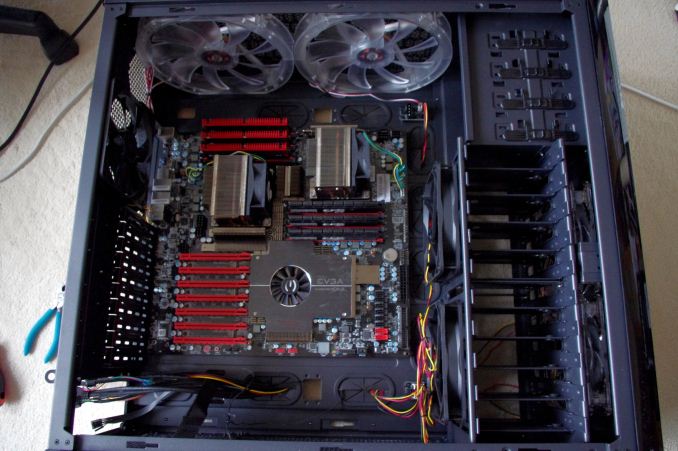 Rosewill also has the perfect power supply for dealing with a dual processor, quad CrossFireX setup. First, consider how many connections this 2P setup needs – we have a normal 24-pin ATX connector for the motherboard, one 8-pin CPU power connector for each CPU, an additional 6-pin PCIe power connector for each CPU to provide extra power, another 6-pin PCIe power connector to provide power to the PCIe slots, and then two 6+2 PCIe power connectors for the GPUs. That makes 11 PCIe connectors needed in total, and this is alongside all the fans in the case and whatever SSD/ODD setup a user wants. The power supply used for this monster is the 1600W Hercules, rated 80PLUS Silver. With access to 16 PCIe connectors, the only way you might need any more is with a compute rig having seven single slot cards each needing two connectors. With the CPUs and GPUs both overclocked, our system was drawing almost 1500W at the wall (at a 240V source) under a high CPU+GPU load. 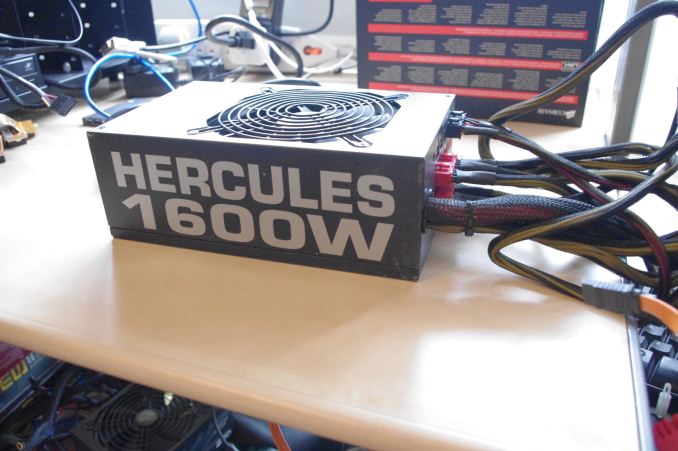 Using a 2P system as a desktop comes with its own set of issues, namely some CPU benchmarks not optimized for 2P, or in this case, some trouble getting some games to even work. It seems that the more money you can throw at a gaming system the more problems start to arise, but The Beast provides a nice comparison point when we look at high-end Ivy Bridge, Sandy Bridge-E and Piledriver processors in multiple-GPU setups.

Our first port of call with all our testing is CPU throughput analysis, using our regular motherboard review benchmarks.