Wrapping things up, I ended up having to sit on our Radeon HD 7990 results for a while before I could really decide what to make of them. The 7990 right now is a mixed bag for a few different reasons, and in the meantime without FCAT results we don’t have the complete picture. We’ll be rectifying the FCAT situation in the coming days, but even without FCAT there are clearly a few strengths and a few weaknesses for the 7990 that we can touch upon.

As far as performance goes, it’s interesting to note that if we throw out the extremely lopsided DiRT: Showdown, the GTX 690 and the 7990 are statistically tied at 2560x1400: on average the 7990 delivers 100% of the performance of the GTX 690. Of course there aren’t any games where they’re tied, since NVIDIA and AMD exchange the lead on an almost per-game basis. We’re going to have to look at the FCAT results to make a final determination on performance, but realistically the best-case scenario is that AMD can match NVIDIA’s frame pacing; it probably won’t be in AMD’s favor.

However that brings up a second point: if the GTX 690 and 7990 are equal in performance, are they equal overall? No, and that’s for two reasons. The GTX 690 is a 300W card and the 7990 is a 375W card. The GTX 690 consumes around 75W less power and puts off 75W less heat, full stop. From a power/performance perspective, that scenario makes the GTX 690 look like the better card. It’s very reminiscent of what we’ve already seen with GK104 vs. Tahiti in single-GPU cards; NVIDIA has AMD beat on power efficiency right now. Power consumption isn't everything, mind you, but there is a notable difference.

Yet on the other hand the GTX 690 is dated; it’s a $999 card with only 2GB effective VRAM per GPU. It’s not a problem at this moment, but 2GB at multi-monitor resolutions in particular is going to be a wall very soon, and 2560 may not be too far behind. 2GB per GPU was reasonable in 2012, but now it’s a year later and things change. So for as little as we can predict something to be future-proof, AMD certainly seems to have an edge. 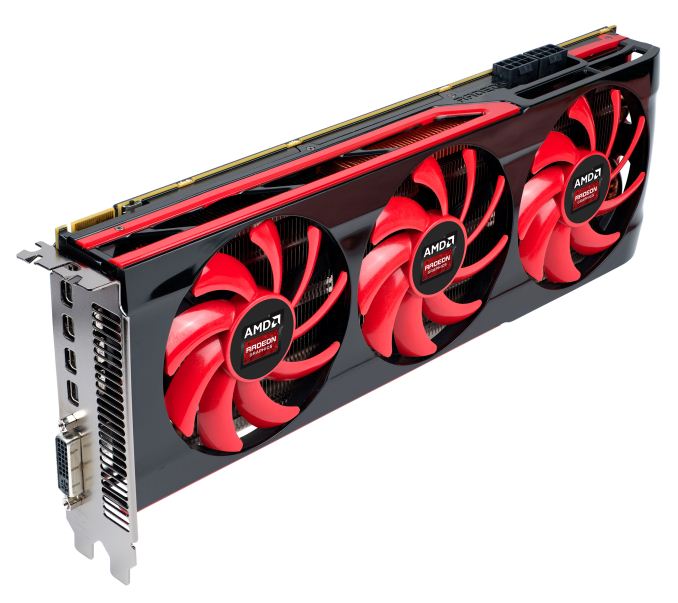 Speaking of the GTX 690, this brings up our other concern: timing. There’s really not a very good way to point this out, but AMD’s 7990 is historically late. AMD usually ships their dual-GPU capstone part no more than 6 months after the launch of a new family, and instead it will have been 17 months after the launch of the first 7970 by the time the first AMD 7990 ships. That’s just shy of a year after the GTX 690, the card AMD is just tying today.

AMD to their credit hasn’t been sitting idle for 17 months. Cards like the PowerColor and Asus 7990s – even if they’re unofficially official – have AMD’s hand in them, with AMD supplying their engineering expertise to help their partners design their cards. The AMD 7990 is smaller, cooler, less power hungry, and otherwise less complex than the earlier custom cards, and the vast bulk of this is thanks to AMD binning Tahiti GPUs for the 7990. So the real head scratcher is this: why wasn’t AMD doing this aggressive binning and putting together a card like their 7990 a year ago?

Regardless, the end result is that AMD is delivering the dual-GPU Tahiti card the world has been waiting for roughly a year later would be expected. Being late doesn’t make it a bad card, it’s just hard to get excited about a dual-GPU card with this kind of performance at this stage in the game. Anyone still in the market for such a card is going to be pleased to have more options, but otherwise most hardcore gamers have probably upgraded to something like 7970CF or GTX 690 in the intervening 12 months.

Ultimately we’re not looking to be dour on the 7990, it just hasn’t particularly excited us. It’s a solid piece of engineering on AMD’s part to get a pair of Tahiti GPUs into a dual-GPU card like this, and the noise improvements over the 6990 are simply incredible. The 7990 is the natural progression of AMD’s dual-GPU cards, and with AMD’s improvements it’s a fine addition to the Radeon family.

As always however, our usual reservations about multi-GPU cards apply. We continue to favor strong single-GPU cards for their consistency, and right now at the $1000 price point that’s Titan. For buyers that have faith in multi-GPU scaling and AMD’s ability to deliver timely profile updates the 7990 can and will handily surpass Titan by about 20%.; just be aware of the pros and cons that come with such a card.

Bringing things to a close, in a few days we’ll be following up today’s launch article with an in-depth look at the 7990’s performance under the microscope of FCAT. AMD has laid out a plan to improve their frame pacing situation, and with AMD’s alpha drivers in hand we can take our first look at AMD’s changes and what kind of an impact those will bring. So please stay tuned for that.