This brings us to the subject of today’s article, FCAT, the Frame Capture Analysis Tool.

As we mentioned in our look at stuttering yesterday, as it turns out both NVIDIA and AMD agree with the fundamental problem of trying to judge frame intervals from the start of the rendering pipeline. For the past couple of years NVIDIA has been working on an alternative tool to measure frame latency at the end of the rendering pipeline, and at long last they are releasing this tool to reviewers and the public. This tool is FCAT.

So what is FCAT? FCAT is essentially a collection of tools, but at its most fundamental level FCAT is a simple, yet ingenious method to measure frame latency at the end of the rendering pipeline. Rather than attempting to tap into the video drivers themselves – a process inherently fraught with problems if you’re intending to do it in a vendor-neutral manner that works across all video cards – through FCAT NVIDIA can do true frame analysis, capturing individual frames and looking at them to determine when a buffer swap occurred, and in turn using that to measure the frame interval.

So how does FCAT work? FCAT is essentially a 2 part solution. We’ll dive into greater detail on this in part 2 of our FCAT article, but in summary, due to the inner-workings of video cards, monitors, and PC capture cards, both monitors and PC capture cards work at fixed intervals. Regardless of the frame rate an application is running at, most PC LCD monitors operate at a 60Hz refresh interval. In the case of v-sync this means buffer swaps are synchronized with the refresh interval (which among other things caps the framerate at 60fps), but when v-sync is disabled, buffer swaps can occur in the middle of a refresh. As a result any given refresh interval can be composed of multiple frames. This makes it possible to display well over 60fps on what’s otherwise a 60Hz monitor, with the end result being that multiple frames can be in one refresh interval. 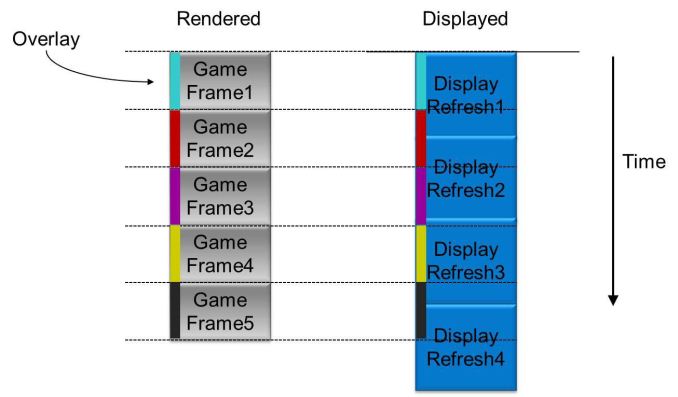 Ultimately by capturing frames and analyzing them, it is possible to tell how many frames were delivered in any given refresh interval, and furthermore by counting the time between those partial frames and comparing it to the refresh interval, it is possible to compute just how long the frame interval was and how long any individual frame was visible.

Of course doing this on a raw game feed would be difficult in the best of situations. As a simple thought experiment, consider a game where the player isn’t moving. If nothing changes in the image, how is one to be able to tell if a new frame has been delivered or not? 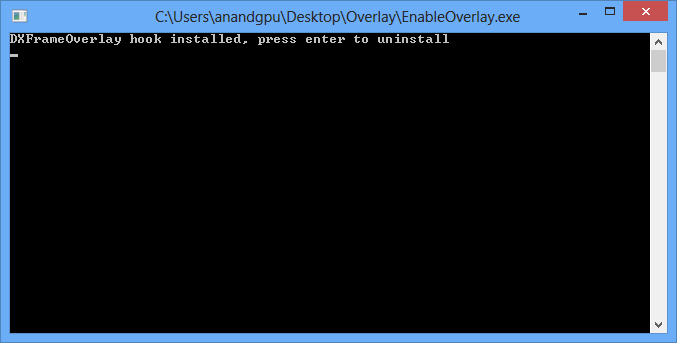 The solution to this is in the first-half of FCAT, the overlay tool. The overlay tool at its most basic level is a utility that color-codes each frame entering the rendering pipeline. By tagging frames with color bars, it is possible to tell apart individual frames by looking at the color bars. Regardless of the action on the screen (or lack thereof), the color bars will change with each successive frame, making each frame clear and obvious. 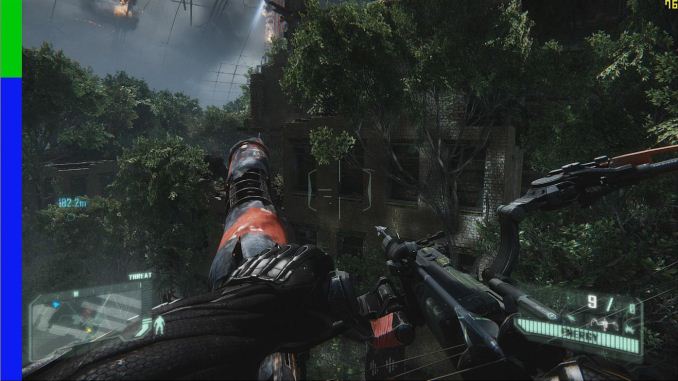 On a technical level, the FCAT overlay tool ends up working almost identically to video game overlays as we see with FRAPS, MSI Afterburner, and other tools that insert basic overlays into games. In all of these cases, these tools are attaching themselves to the start of the rendering pipeline, intercepting the Present call, adding their own draw commands for their overlay, and then finally passing on the Present call. The end result is that much like how FRAPS is able to quickly and simply monitor framerates and draw overlays, the FCAT overlay tool is able to quickly insert the necessary color bars, and to do so without ever touching the GPU or video drivers.

With the frames suitably tagged, the other half of the FCAT solution comes into play, the extractor tool. By using a PC capture card, the entire run of a benchmark can be captured and recorded to video for analysis. The extractor tool in turn is what’s responsible for looking at the color bars the overlay tool inserts, parsing the data from a video file to find the individual frames and calculate the frame intervals. Though not the easiest thing to code, conceptually this process is easy; the tool is merely loading a frame, analyzing each line of the color bar, finding the points where the color bar changes, and then recording those instances. 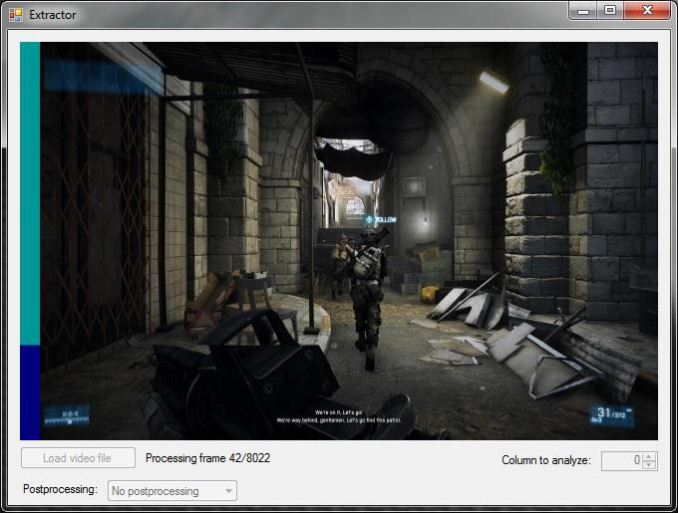 This ultimately results in a Tab Seperated Values file that contains a list of frames, when they occurred, the color bar they were attached to, and more. From here it is possible to then further process the data to calculate the frame intervals.

The end result of this process is that through the use of marking frames, capturing the output of a video card, and then analyzing that output, it is possible to objectively and quantitatively measure the output of a video card as an end-user would see it. This process doesn’t answer the subjective questions for us – mainly, how much stutter is enough to be noticed – but it gives us numbers that we can use to determine those answers ourselves.

Finally, for the purposes of this article we’ll be glossing over the analysis portion of FCAT, but we’ll quickly mention it. Along with the overlay and extractor tools, FCAT also includes a tool to analyze the output of the extractor tool, from which it can generate graphs, identify so-called “runt” frames, and more. The analysis tool is not strictly necessary to use FCAT – one can always do their own analysis – but the analysis tool does simplify the use of the suite by quickly and conveniently handling that last step of the process. We’ll get into the analysis tool in much greater detail in part 2 of our article, where we can apply it to our full suite of test results to better understand what it looks for and what it’s representing. 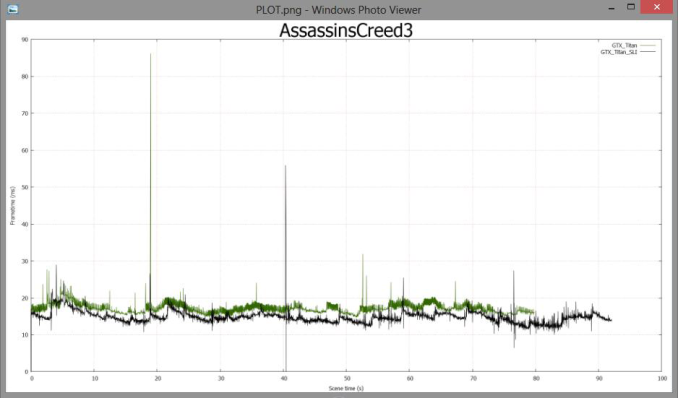