This is the section that probably will garner the most scrutiny. The Edge comes with a 41.44Wh battery, and in normal usage situations, it does about as well as one could expect from an Ivy Bridge-based tablet. Surface Pro comes with a similarly sized battery, and we saw pretty similar runtime from the two tablets (Surface Pro, on average, had about 15-20 minutes more life in any given test). Considering that IVB ultrabooks don’t fare too much better (or, in some cases, significantly worse – looking at you Acer) I guess it’s hard to complain here; until we see Haswell and its significant idle power reduction later this year, ARM and Clovertrail tablets are going to slaughter IVB tablets in this category. 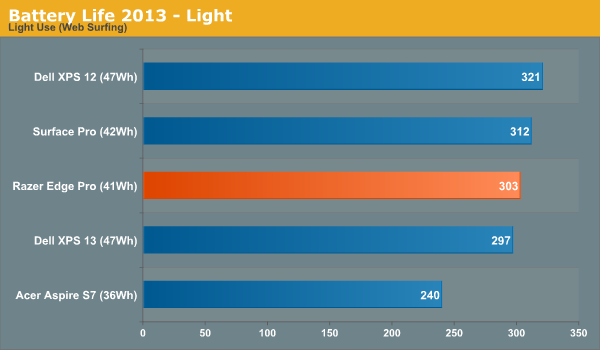 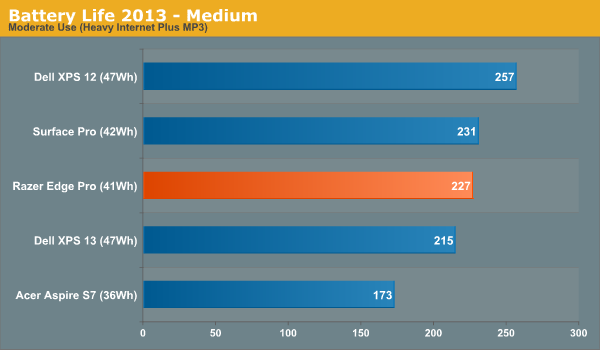 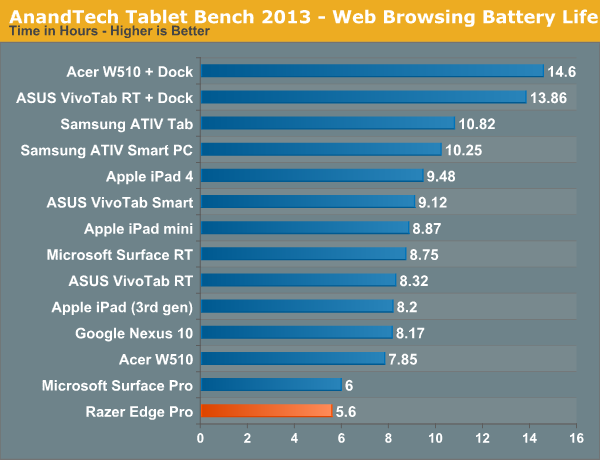 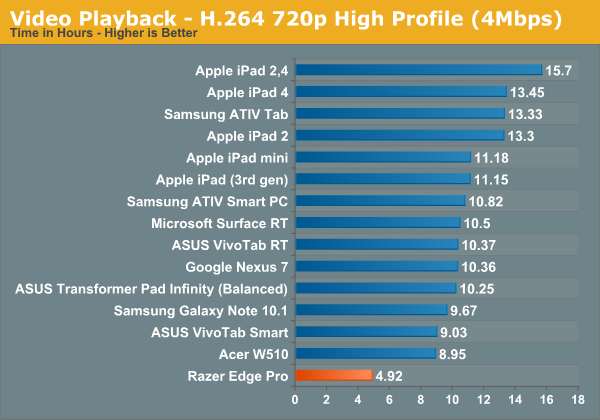 There’s an additional wrinkle with the Edge – the mobile gaming aspect. I broke down the typical gaming power draw in the introduction, and it’s worth bringing back up: pair a 17W CPU and a 20W GPU, consider that almost no reasonable workload will peg both at the same time, toss in loads for the display, SSD, RAM, WiFi, chipset, and all the other auxiliary components, and a 40W total system draw estimate in gaming workflows is pretty reasonable. If you’re using the Edge in the gamepad controller with the extended battery, there’s a total of 82.88Wh of battery power onboard. This sets up a pretty simple equation to estimate the gaming battery life: 82.88Wh/40W = ? hours. Do the simple division, and you’re looking at a hair over two hours, which is where Razer’s “two hours of gaming battery life” claim comes from. (I had John Wilson, Razer’s VP of System Engineering, walk me through the math here, and he confirmed that 80 divided by 40 did in fact equal two.)

Naturally, a good amount of testing was in order, so I unplugged the Edge, went to a nearby coffee shop, and played Dirt 3 until the battery died. I did this multiple times in the interest of generating as much data as possible (I love my job.) I was initially planning on using a timedemo or looping a benchmark, but I thought it would be more fun to actually game on the Edge – I also needed some real world mobile gaming experiences, so it killed two birds with one stone.

I spent most of my time in Dirt 3 and Need For Speed: The Run. The latter isn’t part of our benchmark suite and it’s not the most recent NFS title (it was a holiday 2011 release), but the Cannonball Run-esque storyline intrigued me and I’ve been meaning to play through it for some time without ever getting the chance to do so. The Edge review just gave me the excuse I needed to get into it.

The two hour estimate is pretty fair, depending on brightness levels, power plan, and graphics settings I saw anywhere between 1:45 and 2:30 in the newer games. I also fired up Quake III: Arena for curiosity’s sake, to see how much less strenuous a 12 year old game would be, and got 3:12 of playing time out of it. It’s worth noting that I wasn’t hitting network at all, either, so that’s another thing to consider.

In the “Balanced” power plan and a brightness of 200nits (55%), playing Dirt 3 with medium settings at the native 1366x768 resolution, the Edge lasted for 136 minutes (2:16) before running out of juice. That’s pretty much in line with what we expected, and lowering the brightness can help extend that. I wouldn’t recommend high or ultra settings due to the additional power draw, while the Power Saver profile throttles the GPU far too aggressively for smooth gameplay even at medium settings. The Balanced power profile and medium settings made for a nice compromise in mobile use cases.