As always we’ll also take a quick look at synthetic performance to get a better look at our video cards' underpinnings. These tests are mostly for comparing cards from within a manufacturer, as opposed to directly comparing AMD and NVIDIA cards.

We’ll start with 3DMark Vantage’s Pixel Fill test, a mix of a ROP test and a bandwidth test to see if you have enough bandwidth to feed those ROPs. 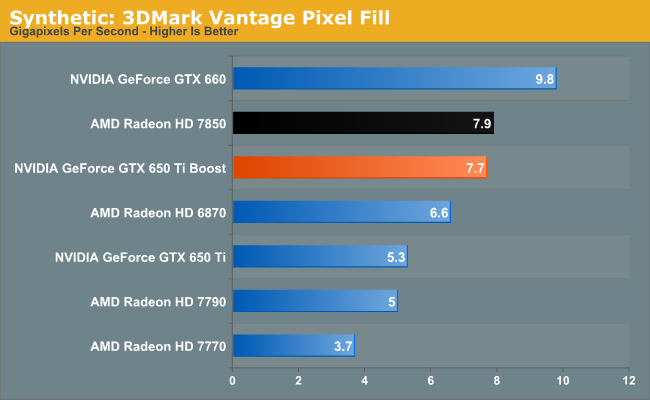 3DMark Vantage’s pixel fill test confirms what we know from the specs of the GTX 650 Ti Boost: that it has received a massive boost in ROP performance and memory bandwidth. The 45% greater pixel throughput rate here doesn’t reach the kind of lofty goals that the theoreticals would put it at, but it’s clearly quite an improvement. Interestingly despite the equal ROP throughput and memory bandwidth of the GTX 660 and GTX 650 Ti Boost, the GTX 660 is still clearly in the lead here. We’ve never looked at the impact of GPCs here, so if our card is a 2 GPC model then this might explain what we’re seeing. 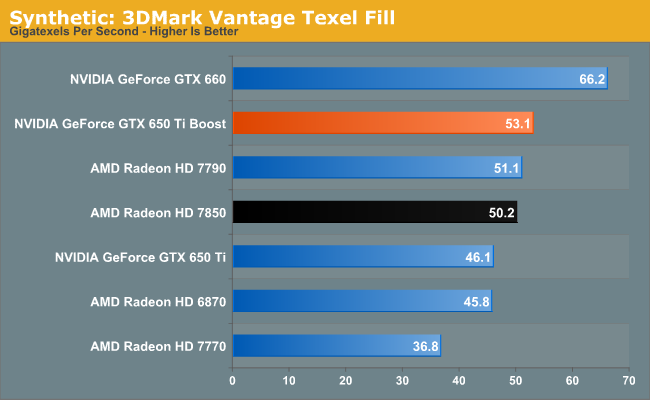 Finally we’ll take a quick look at tessellation performance with TessMark. We have everything turned up to maximum here, which means we're looking at roughly 11 million polygons per frame. 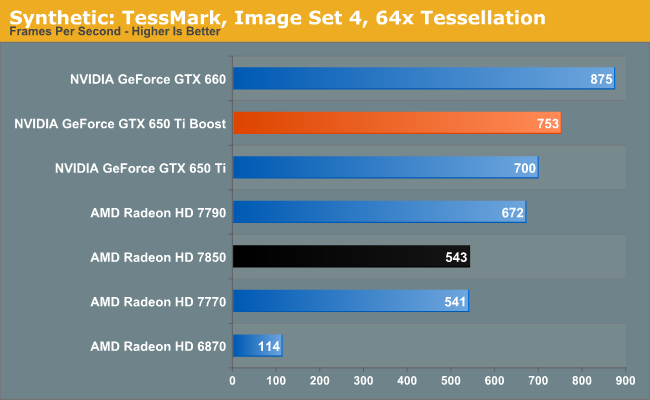 NVIDIA has always had a fairly ridiculous geometry throughput rate, and that doesn’t change on the GTX 650 Ti Boost. A score of 753 is second only to the GTX 660, and well ahead of the 7850, which is an interesting confluence of a 2 primative/clock rate, and its lower clockspeeds relative to the 7790 and GTX 650 Ti Boost.