I want to go deeper into ARM’s Cortex A15 but I’ll have to save that for another time. At a high level you’re looking at a much deeper, much wider architecture than the Cortex A9. The integer pipeline is significantly deeper (15 stages vs. 9 stages), however branch prediction has been improved considerably to hopefully offset the difference.

The front end is 50% wider and has double the instruction fetch bandwidth of the Cortex A9, which helps increase instruction level parallelism. In order to capitalize on the 3-wide machine, ARM dramatically increased the size of the reorder buffer and all associated data structures within the machine. While the Cortex A9 could keep around 32 - 40 decoded instructions in its reorder buffer, Cortex A15 can hold 128 - an increase of up to 4x. The larger ROB alone gives you a good idea of the magnitude of difference between the Cortex A9 and A15. While the former was a natural evolution over the Cortex A8, ARM’s Cortex A15 is really a leap forward both in performance and power consumption - clearly aimed at something much more than just smartphones. 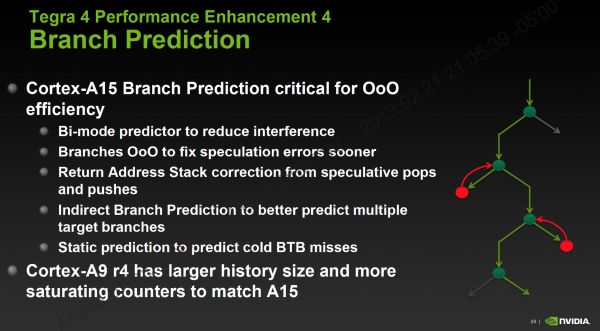 Getting to the execution core, A15 continues the trend of being considerably wider than A9. There are more execution ports and more execution units, all of which help to increase ILP/single threaded performance. ARM went to multiple, independent issue queues in order to keep frequencies high. Each issue queue can accept up to three instructions and all issue queues can dispatch in parallel.

The A15 can execute instructions out of order like the A9, however its abilities grow quite a bit. All FP/NEON instructions had to be executed in-order on Cortex A9, but they can now be executed OoO in the A15. Despite the beefier OoO execution engine, the Cortex A15 can’t reorder all memory operations (independent loads can be executed out of order, but stores can’t be completed ahead of loads). 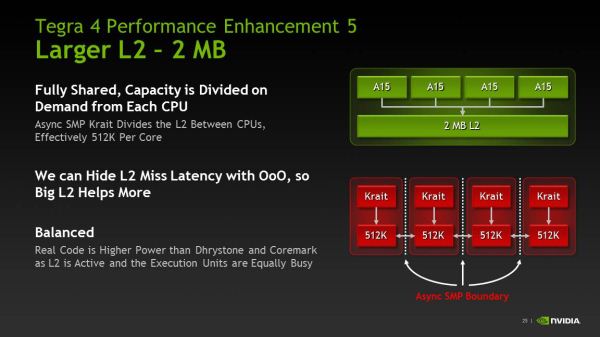 The Cortex A15 moves back to an integrated L2 cache structure, rather than a separate IP block as was the case with the Cortex A9. L1 and L2 cache latencies remain largely unchanged, although I do believe A15 does see a 1 - 2 cycle penalty over A9 in a few cases. The level 2 TLB and other data structures grow in size considerably in order to feed the hungrier machine.

Although the L1 caches remain the same size as NVIDIA’s Cortex A9 (32KB I + 32KB D), the the L2 cache grows to 2MB. The 2MB L2 is shared by all four cores (the companion core has its own private 512KB L2), and any individual core can occupy up to the entire 2MB space on its own. Alternatively, all four cores can evenly share and access the large L2.