Since we’re talking about a smartphone we must understand the imaging chain, and thus block diagram, and how the blocks work together. There’s a multiplicative effect on quality as we move through the system from left to right. Good execution on the optical system can easily be mitigated away by poor execution on the ISP for example. I put arrows going left to right from some blocks since there’s a closed loop between ISP and the rest of the system.

The video block diagram is much the same, but includes an encoder in the chain as well.

The constraints for a smartphone camera are pretty unique, and I want to emphasize just how much of a difficult problem this is for OEMs. Industrial design and size constraints are pretty much the number one concern — everyone wants a thin device with no camera bump or protrusion, which often leaves the camera module the thickest part of the device. There’s no getting around physics here unfortunately. There’s also the matter of cost, since in a smartphone the camera is just one of a number of other functions. Material constraints due to the first bullet point and manufacturing (plastic injection molded aspherical shapes) also makes smartphone optics unique. All of this then has to image onto tiny pixels. 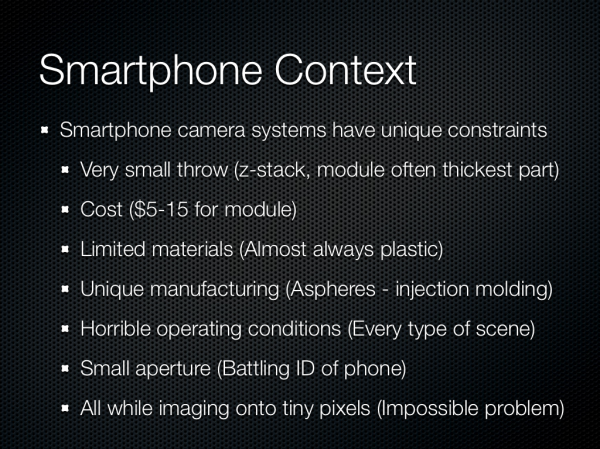 Starting with the first set of constraints are material choices. Almost all smartphone camera modules (excluding some exceptions from Nokia) the vast majority of camera optics that go into a tiny module are plastic. Generally there are around 2 to 5 elements in the system, and you’ll see a P afterwards for plastic. There aren’t too many optical plastics around to chose from either, but luckily enough one can form a doublet with PMMA as something of a crown (low dispersion) and Polystyrene as a flint (high dispersion) to cancel chromatic aberration. You almost always see some doublet get formed in these systems. Other features of a smartphone are obvious but worth stating, they almost always are fixed focal length, fixed aperture, with no shutter, sometimes with an ND filter (neutral density) and generally not very low F-number. In addition to keep modules thin, focal length is usually very short, which results in wide angle images with lots of distortion. Ideally I think most users want something between 35 mm or 50 mm in 35mm equivalent numbers.

I give an example lens catalog from a manufacturer, you can order these systems premade and designed to a particular sensor. We can see the different metrics of interest, thickness, chief ray angle, field of view, image circle, thickness, and so on. 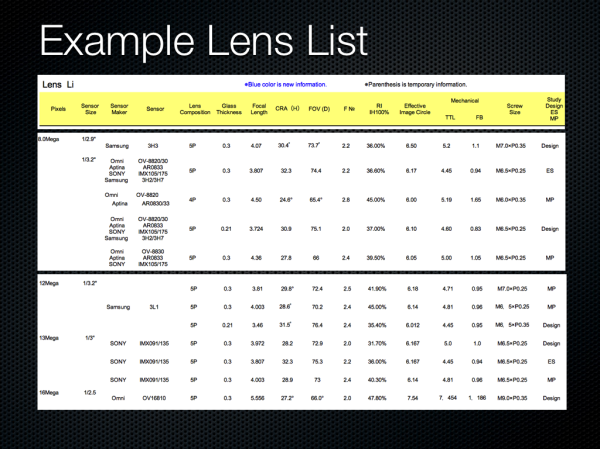 During undergrad a typical homework problem for optical design class would include a patent lens, and then verification of claims about performance. Say what you want about the patent system, but it’s great for getting an idea about what’s out there. I picked a system at random which looks like a front facing smartphone camera system, with wide field of view, F/2.0, and four very aspherical elements. 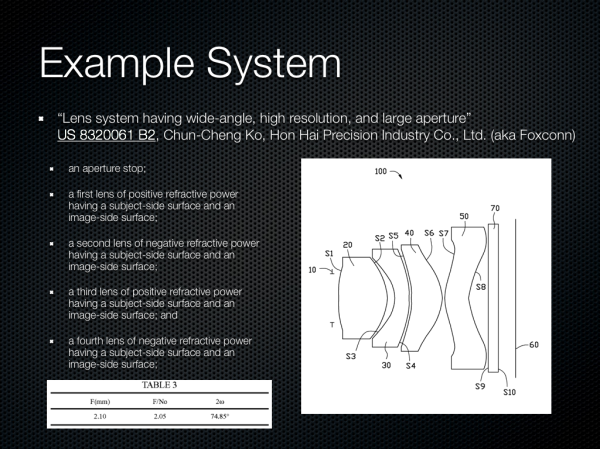 Inside a patent is a prescription for each surface, and the specification here is like almost all others in format. The radius of curvature for each surface, distance between surfaces, index, abbe number (dispersion), and conic constant are supplied. We can see again lots of very aspherical surfaces. Also there’s a doublet right for the first and second element (difference in dispersion and positive followed by negative lens) to correct some chromatic aberrations. 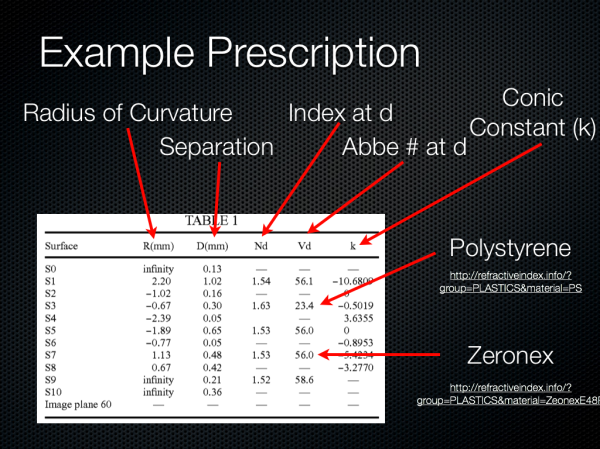 What do these elements look like? Well LG had a nice breakdown of the 5P system used in its Optimus G, and you can see just what the lenses in the system look like. 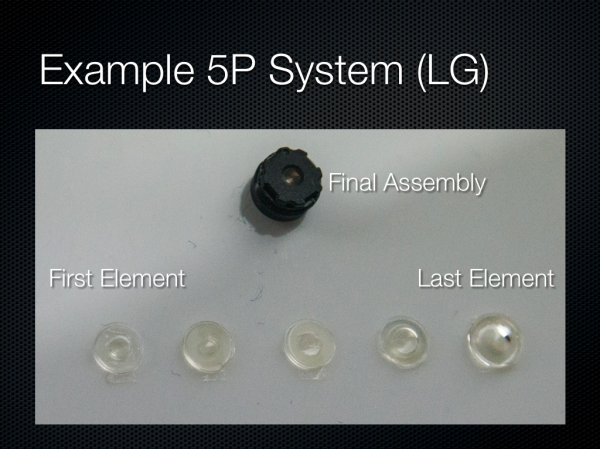