Zoes and the Highlights Reel

The reality of the device landscape at the moment is that raw specs can certainly break a device if they’re not the right ones, but don’t necessarily sell the device. Experiences on the other hand sell devices directly, either from users indireclty marketing them to friends with demonstrations, or through well packaged advertising by an OEM. The short of it is that HTC can deliver an awesome device with great camera, speakers, and microphones, but without something compelling that touches all of them it’s just not quite as impactful or directly engaging.

Enter the HTC One’s killer app, by far, the combination of a new shooting mode called Zoe (short for Zoetrope) and a gallery feature called the Highlights reel.

Zoes are a new form of photography — part video, part still photo, part software. Put simply, a Zoe is video plus still images, specifically 3 seconds of video with 20 full resolution 4 MP images taken during the video record. HTC’s combination of ISP, SoC, and sensor choice enables them to take that 1080p video and simultaneously capture full resolution images, and that’s what a Zoe is. Inside the gallery Zoes animate and then go back to being still, and there’s a UI for scrubbing through the still images which make up that particular Zoe. To shoot a Zoe, one simply taps the button in the camera UI and hits the photo button, which then turns into a progress bar that fills with red as the Zoe is taken. 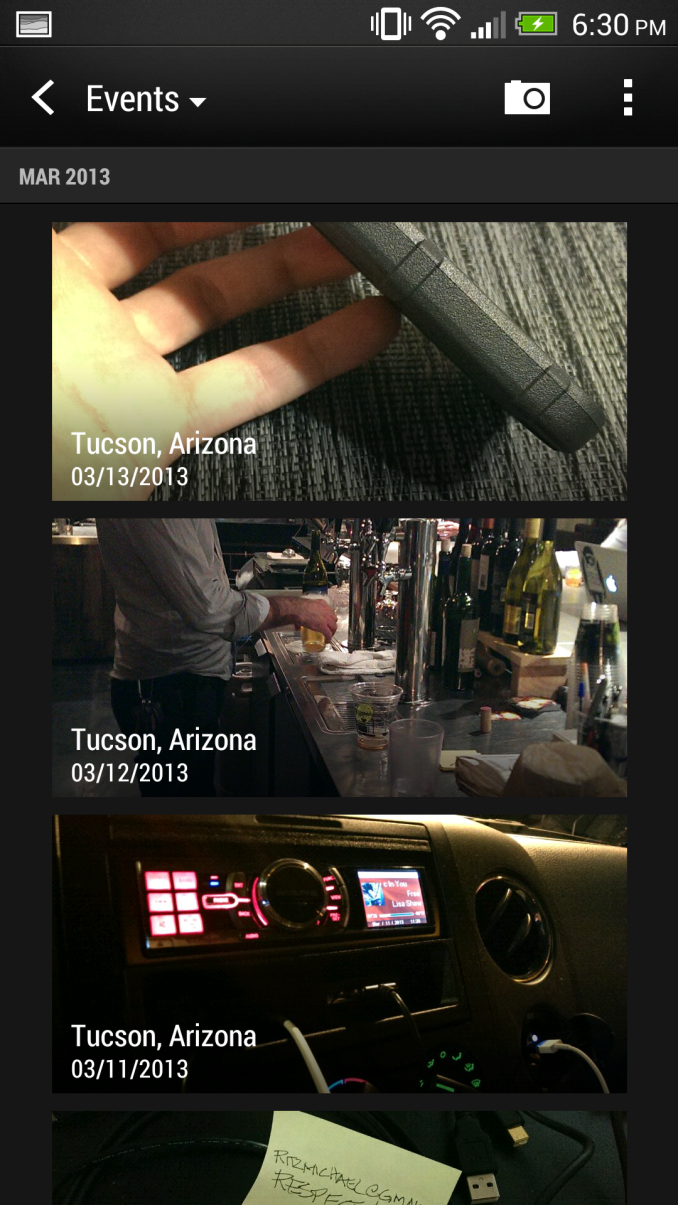 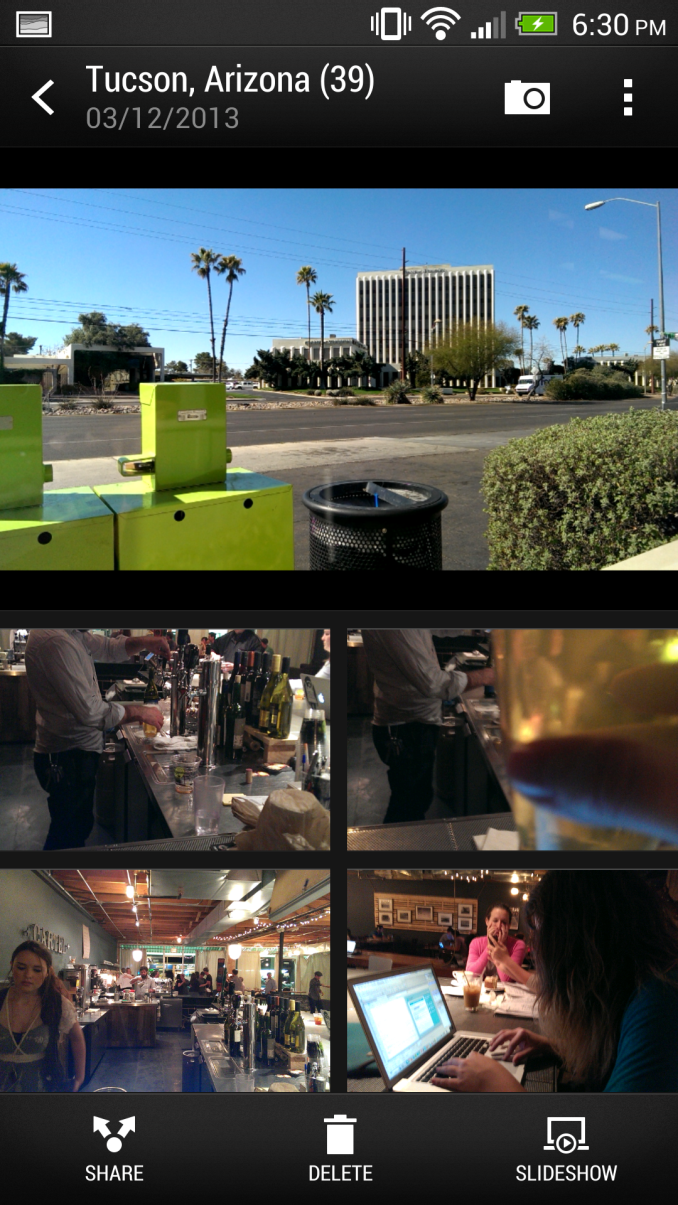 The gallery will animate thumbnails with Zoes and video content inside (left). Tapping on the big double wide icon up top triggers the Highlights Reel (right)

Zoe video is slightly lower bitrate and framerate, 1080p24 8 Mbps H.264 High Profile, but in practice these are good enough if you’re trying to balance a mode that essentially treats videos like photos. 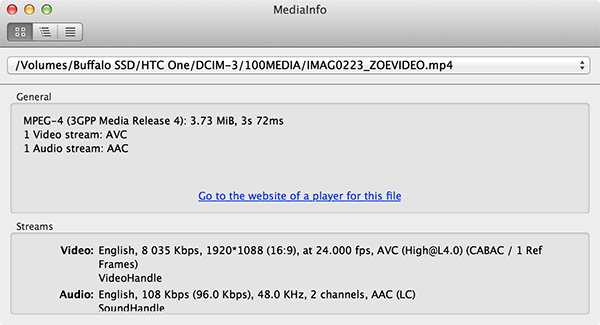 When I first heard about Zoes I was worried that HTC would break the DCIM (Design Rule for Camera File System - Digital Camera IMages) rules and dump the Zoe in some proprietary file extension or zip inside another directory. I was at first overjoyed when I learned they didn’t do exactly that. Instead these are just videos and photos with a different name that the gallery app parses and turns into the Zoe experience, eg “IMAG0815_ZOE005.jpg” and “IMAG0815_ZOE006_SHOT.jpg” for the shot you’ve chosen and “IMAG0815_ZOEVIDEO.mp4” for the corresponding video.

I say at first I was happy because I use Dropbox Camera Upload for all the myriad phones I have in conjunction with a python script I made that sorts the images into appropriate folders based on the camera type in use. The unfortunate part is that Zoes plus Dropbox’s camera upload file renaming makes looking through images a nightmare, and you wind up with 20 per. Hopefully the two will arrive at some collaborative solution since Dropbox and HTC have partnered to offer free storage on non US variants of the One. The rest of the Zoe experience, however, is quite good.

The only thing that takes a bit of a hit is low light performance while taking Zoes, partly because video framerate is prioritized and thus HTC can’t run as long exposures. Most of the time this isn’t a big deal until you’re in an extremely dark scene.

The real advantage to shooting Zoes instead of normal photos or videos is what you can do with them on the One with the next feature — the Highlights Reel. 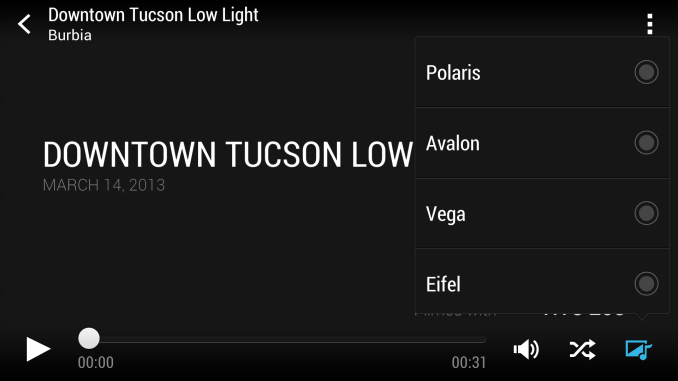 HTC has combined the concept of events inside its gallery with a unique computationally edited 30 second video experience called the Highlights Reel. After tapping on the top icon in a gallery in the element view, you’re greeted with a short video built from all the images and videos from the event. Zoes, images, and videos get arranged into a video with music and appropriate editing, and it looks awesome. 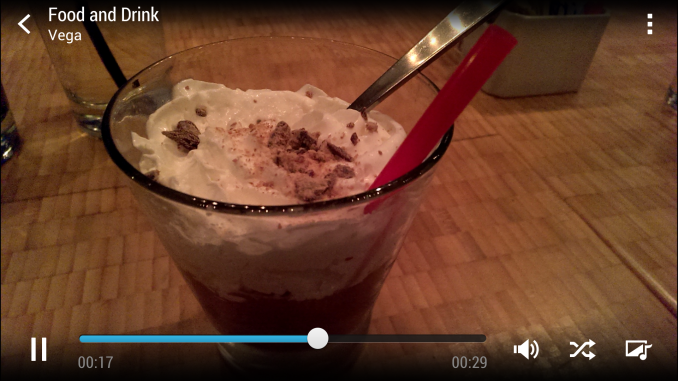 Still images get a Ken Burns effect with panning and zooming, videos play back in short little sequences, it seems as though HTC also does face detection to pick out what images and videos to use, and the result usually is enough to tell the story of an evening or some social engagement if you’re actively taking Zoes and other media. There are six different themes, with different filters and moods that range from dreamy to making you feel like you’re part of some reality show. At present only those six combinations of music, filters, and cuts are available, though in the future HTC will add the ability to include custom music and perhaps more themes.


The Highlights reels can be viewed immediately (rendered in real time on the device, which is impressive) or encoded and saved out to a video for doing what you want with. In addition HTC has a first party sharing service called Zoe share which stores the Highlights Reel, Zoes, and media on HTC’s servers for 180 days with either an HTC account or Facebook login. I uploaded an example Zoe Share based on my low light downtown test photos and videos, and another one based on a few outings with friends.

I’ve made a lot of great Zoes in my time with the HTC One, and the best ones have people and friends in them, unfortunately those are the people most likely to get angry about me sharing videos of their antics. If you shoot Zoes for an evening or take a trip and only shoot them however, the One will produce some awesome Highlights reels. The HTC software does an incredibly good job creating something engaging and professional looking videos with minimal interaction. It’s really optimal to shoot Zoes if you’re going to be looking at the Highlights reel afterward, and this is the exact kind of content you want to use with the front facing speakers. It’s the perfect example of a killer app which shows off all the cool parts of the HTC One.