A huge part of the HTC One story is how the device is entirely one piece of aluminum without suffering from unintended attenuation or detuning when held. To a large extent, all-metal and phone are an oxymoron. It goes without saying that a phone requires cellular connectivity to be more than a brick, and sticking antennas inside of an RF opaque metal box isn’t an option, therefore an all metal platform necessitates using part of the exterior as the radiator itself. The problem with the exterior is that the device then becomes sensitive to capacitive detuning from contact with the skin, to say nothing of the attenuation from such close proximity with your water-filled appendages. I hopefully don’t need to revisit how this has been a problem for other handset manufacturers in the past who were a bit overzealous about pushing industrial design somewhere RF at the time wouldn’t allow it to go.

The other problem is broad frequency band support in a world where we keep adding more. Moving to an exterior antenna that is part of the industrial design means one geometry for a ton of markets with sometimes wildly different frequency bands for LTE. Traditionally OEMs tackle the battle by having a modular antenna and speaker box at the bottom which gets changed out depending on the SKU or region for the appropriate primary bands. With external antennas that are part of the look, feel, brand, and are constrained by manufacturing processes, there’s no allowance for different things for different markets. With the One, HTC solves these problems by including full transmit and receive diversity along with actively tuned antennas and special antenna feeding. By active tuning I mean a dedicated antenna tuner with the ability to match impedance and drive optimal SWR (standing wave ratio) across the antenna for each band or depending on the presence of a case or hand. I’ve also verified there’s a double pole double throw switch for transmit and receive diversity. To look at the feed points we’d need to disassemble the One, but that’s a bit daunting on a device with no screws.

The One is HTC’s realization of a long held dream to create an all metal phone, and as such I asked for an official statement about what specific features were incorporated into the antenna design, since this is a huge part of what’s special.

The antenna design is composed of some active components, special antenna feeding structure and the metal ID appearance. All are in-house design and HTC owned IP. With regards to ensuring high quality reception for all the various types of radio frequencies, we’ve utilized proprietary adaptive antenna solutions plus special antenna feeding structure and built in redundancies to ensuring that attenuation doesn’t affect the overall antenna performance regardless of how the handset is held.

For a while now HTC has been pushing the boundaries of antenna design in their platforms. Previous unibody phones with primarily metal exteriors cleverly located antennas patterned on the inside of polymer regions, like the HTC Sensation or One S, and I’ve always been impressed with HTC’s willingness to use just about any RF transparent region to hide an antenna while making the rest of a device metal, like the HTC Desire HD. HTC could then swap out these polymer inserts per market and get to a different antenna geometry with the right gains for each band. But going to all metal has always been the real goal, a goal the One achieves without any caveats from what I can tell. 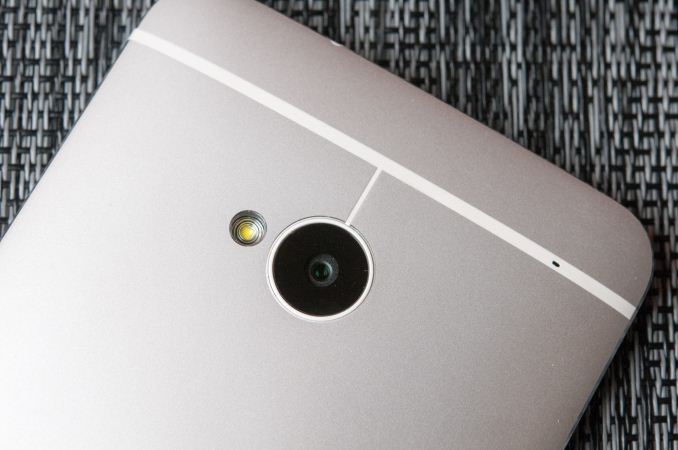 I mentioned earlier that actively tuned antennas are going to be a part of 2013, and the reason is support for so many LTE bands, though it also goes hand in hand (haha, get it?) with the deathgrip problem. In fact, HTC fought a battle very similar to the battle fought by Apple over the past three generations of iPhone (four if you count the CDMA/Verizon iPhone 4) to get to a metal exterior with the iPhone 5 without caveats. Before you go and say that HTC copied Apple, remember that the reality of product development cycles means that HTC was well underway with the One around the time the 4S was out. 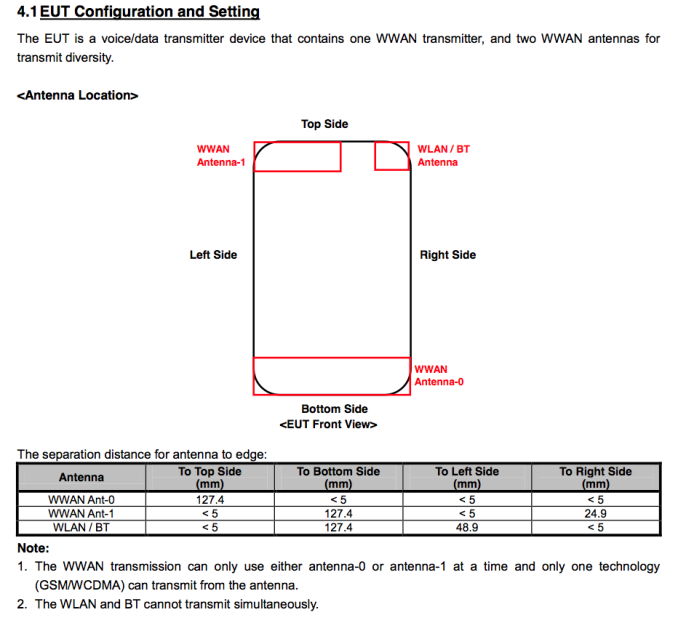 The HTC One uses the two metal strips at the top and bottom for antennas. The top is used for both cellular and WiFi/BT, the bottom is just cellular. In addition the One is the first phone other than the iPhone 5/4S I’m aware of which has full transmit diversity, allowing it to choose between the top or bottom to transmit depending on which offers better radiative properties (no hand on it). Interestingly enough the One is actually more sophisticated than the iPhone 5 in this regard by combining both 2.4 and 5 GHz WiFi/BT and transmit/receive cellular into this top antenna. On the iPhone 5 the WLAN/BT combo still has its own discrete PIFA (planar inverted F antenna) printed on a flex board, which then radiates out the top glass back region. With the One there aren’t any glass regions, so HTC instead uses that top metal antenna to do double duty with the right set of filters.

Receive diversity is mandatory for LTE, but even the UMTS/WCDMA only One includes it since is is again required in part to enable the all metal design. All of the One models are based on Qualcomm’s 28nm 2nd generation LTE baseband, the MDM9x15 platform we’ve seen a bunch of, and its DC-HSPA+/GSM-only (LTE blocks fused off) sibling, MDM8215 for the UMTS/WCDMA only model. This is a big step up from the international edition of the One X and One X+ which both shipped without receive diversity and were based on the aging Intel/Infineon XMM6260 platform.

Like any LTE-enabled handset right now, there’s still no way to deliver a single SKU with support for all of the bands that are required, even with active tuning, just due to what transceivers we have. As a result there are a number of different announced variants of the One, which I’ve outlined in a table. There’s also the rumored Verizon model which will no doubt just be a cousin of the Sprint version but instead with support for Band 13.

I’ve been playing with the international EMEA version of the One (Europe, Middle East, and Africa) which thankfully includes PCS 1900 MHz WCDMA support since I live in an AT&T PCS 1900 only market. I’ve also been using that same device on T-Mobile on WCDMA thanks to the recent rollout of WCDMA on PCS 1900 MHz carriers. In my time with the device, I’ve been very impressed with cellular RF performance and haven’t ever seen the handset be affected by detuning from holding it. The combination of receive and transmit diversity along with active tuning means that deathgrip is basically a thing of the past in metal phones like the One.

My last note about the HTC One is that just like the last set of HTC devices, there’s no awesome Qualcomm field test application which you can get to via a dialer code. That’s gone on every single variant as a result of some operator request for proposals which explicitly asked for it to be removed. Operators remain the reason we can’t have nice things, even on international phones.

Just to prove that it works, I attached the HTC One to the Anritsu MD8475A signaling tester that they graciously have loaned me. The EMEA (Europe, Middle East, Africa) International HTC One I’m reviewing includes support for LTE on 800, 1800, and 2600 MHz (Bands 20, 3, 7). I was able to attach the HTC One with no problem to a Band 3 test network with 20 MHz FDD channels and sustain the expected UE Category 3 throughput of just short of 100 Mbps downstream.

GNSS (Global Navigation Satellite System) on the HTC One comes basically for free off of the MDM9x15/MDM8215 baseband and includes both USA GPS and Russian GLONASS support. This is the same GPSoneGen8A with GLONASS that we’ve seen in many Qualcomm modems in the past, and I can’t find any issue with it on the One. It works off of one of the cellular receive paths and locks extremely quickly.

The One also includes NFC in spite of having a metal body. Here things are bit more opaque to me. The NFC active region is centered around the camera aperture. If we look at the transparent photo of the One we can see there’s clearly a loop antenna below the aluminum, and the FCC documents confirm the presence of a loop antenna for NFC. The insulating notch which connects to the larger main notch clearly is some key aspect of the design since it is present right here, and also in a similar means on the Padfone Infinity (perhaps to prevent some kind of induced loop current?). The location of the NFC coils around the camera aperture of course helps not degrade the electromagnetic field entirely. Either way I haven’t had any issues with NFC on the HTC One, and it appears to be working courtesy the ubiquitous NXP PN544 controller.

One thing obviously not present on the One is wireless charging. The reality is that having that much metal and a magnetic inductance based charging system isn’t possible.

On the WiFi side of things the HTC One is the first smartphone to support 802.11ac, the next generation WiFi standard, and thus inherits support for 802.11a/b/g/n. 802.11ac we have written about before, and basically extends 802.11n support on 5 GHz to include support for 80 MHz channels (up from 40 in N), additional spatial streams, 256QAM, and multi user MIMO. In the case of the HTC One, we get 802.11ac support included with the new Broadcom BCM4335 combo I’ve written about before which is the BCM4334 successor, likewise built on a 40nm CMOS process, and includes a bunch of 802.11ac optional features like 256QAM, short guard interval rates, beamforming, space-time block coding, and low density parity check support. The result is a maximum PHY rate of 433 Mbps which one should be able to see in the best conditions when attached to an 802.11ac router.

I’m still working on an epic roundup of all the 802.11ac routers and just got the new ASUS RT-AC66U in, so this seemed like as good of an excuse as any to hook it up and give it a shot. The HTC One immediately attached without problem and I saw a PHY rate of 433 Mbps in my office. 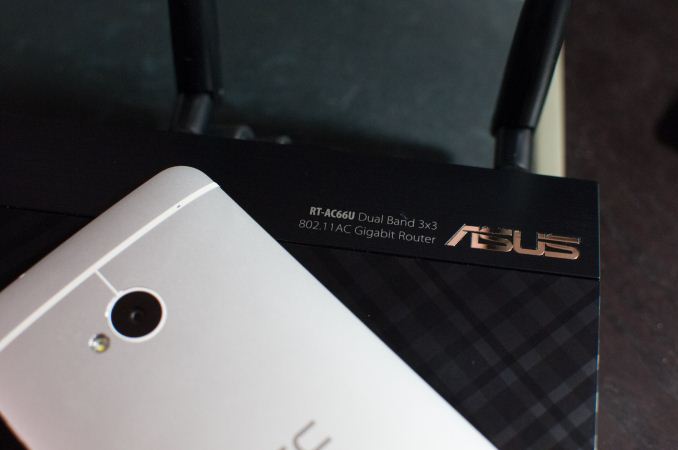 I fired up iPerf and ran our usual test, where I saw 275 Mbps on TCP, and just over 300 Mbps at times on UDP. This is an impressive amount of bandwidth and substantially higher than anything I’ve seen before out of a smartphone. Many have asked what exactly the benefits are from throughput this high on a smartphone, the answer is potentially better battery life given a shorter duty cycle for the same amount of throughput, in addition to the improvements that 802.11ac adds to 5 GHz WiFi in general and that the new combo chip affords, like better range. 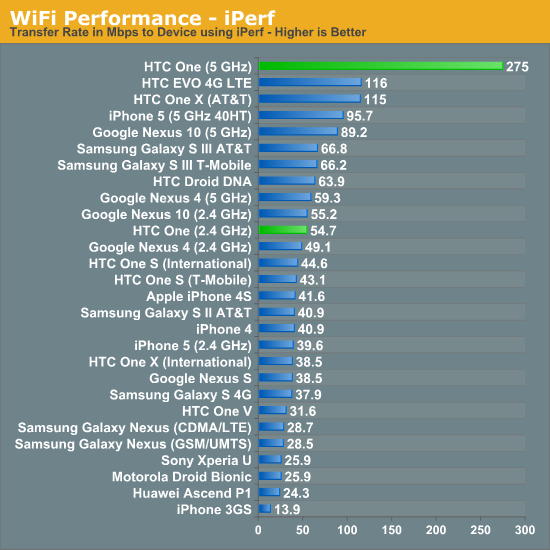 Thankfully the Advanced WiFi menu on the HTC One still includes the frequency band selection menu and other options, including best WiFi performance toggle. I have no issues to report with WiFi working anything other than how I expect it to on the HTC One.