SandForce has always exhibited strange behavior when it came to TRIM. Even Intel's custom firmware in the SSD 520 wasn't able to fix SandForce's TRIM problem. The issue happens when the SSD is completely filled with incompressible data (both user LBAs and spare area). Any performance degradation after that point won't be restored with a TRIM pass and instead will require a secure erase to return to new. None of the Intel SF SSDs have been able to fix this issue and the 525 is no exception. I ran a slightly modified version of our usual test here. I filled the drive with incompressible data, ran our consistency workload (also with incompressible data) then measured performance using a 128KB (incompressible) pass in IOmeter. I then TRIMed the entire drive and re-ran the IOmeter test.

And the issues persists. This is really a big problem with SandForce drives if you're going to store lots of incompressible data (such as MP3s, H.264 videos and other highly compressed formats) because sequential speeds may suffer even more in the long run. As an OS drive the SSD 335 will do just fine since it won't be full of incompressible data, but I would recommend buying something non-SandForce if the main use will be storage of incompressible data.

Idle power consumption is appreciably lower on the 525 than on the 520, however it's still not as low as the latest from Samsung. According to SandForce, a newer silicon spin of the SF-2281 controller exists that drives idle power consumption down even lower however most drive makers haven't chosen to implement it. Intel confirmed that it's still using the same silicon as the 525, so all improvements here are purely due to firmware.

Despite the gains in idle power consumption, I did measure consistently higher power consumption under active workloads. The gains at idle are more important to improving battery life, although I would liked to have seen reductions across the board. Even more, if SandForce has newer, lower power silicon available I'd like to see that used as well. SandForce tells me that its new low power SF-2281 revision is mostly used by OEMs at this point, not channel drive vendors. 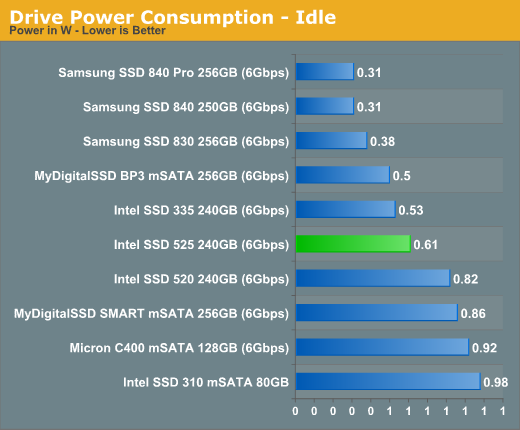 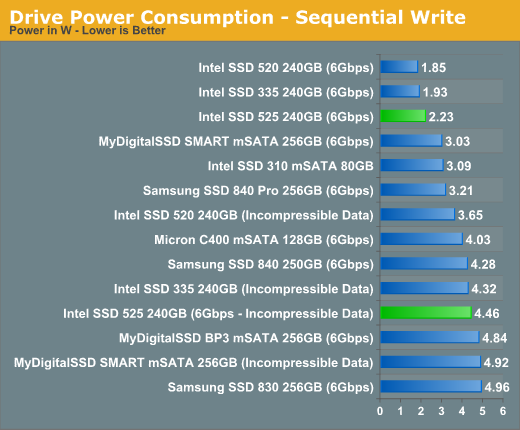 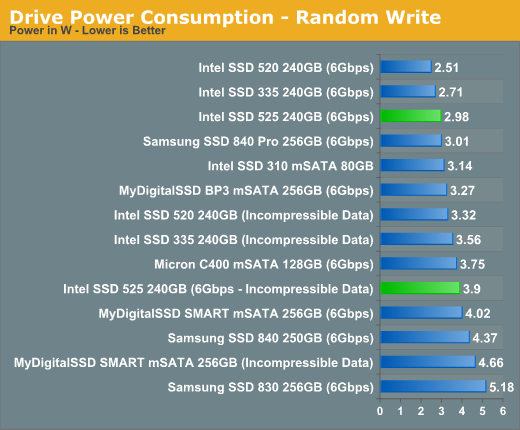