In and Around the NZXT Phantom 630

I'm almost ashamed to admit the NZXT Phantom aesthetic is beginning to grow on me. Part of it is that the 820 I reviewed and now the 630 both employ a gunmetal and black two-tone that I'm partial to, but each successive Phantom has gone a long way towards streamlining the look. The 820 still looked a bit slapdash, but the 630 for the most part has it together. However you feel about the overall design is going to be a matter of taste, but it's at least the most focused Phantom chassis I've seen yet.

The front of the Phantom 630 is the same wedge shape we're used to seeing, with angular accents and a black mesh fan grill. A door held closed magnetically swings open to the right, and it hides four 5.25" drive bays (with easy-to-remove spring-latched shields) as well as the integrated SD card reader. The card reader is something I actually discussed with their designers at CES; every notebook and desktop sold comes with a card reader standard these days, but for some odd reason they're still largely absent in cases. Apparently a basic SD reader isn't particularly expensive to implement, so NZXT went for it, and I honestly appreciate the inclusion. There's a fan filter that slides out of the bottom as well, but when moving the 630 you'll want to try to avoid putting too much pressure on it.

Move to the top of the 630, and that's where NZXT put all of the I/O and controls. The original Phantom, way back in the way, had controls that were borderline indecipherable. The 630, on the other hand, is much clearer. There are two USB 3.0 and two USB 2.0 ports along with the audio jacks, and these are along the top left. The right side sports the three-step fan controller (with three white LEDs beneath it to indicate fan speed), the rear LED toggle (for turning the LEDs around the expansion slots and I/O in the back on and off), and then the power and reset buttons.

While the side panel behind the motherboard tray is flat, the one above it features a single window and then what appears to be a large vent. Actually, beneath the vent is still mostly solid covering with an opening for the substantial 200mm side intake fan. I thought the split window on the 820 was kind of goofy; I'd still like to see NZXT release either a Phantom with solid, closed off sides, but this is a step in the right direction. 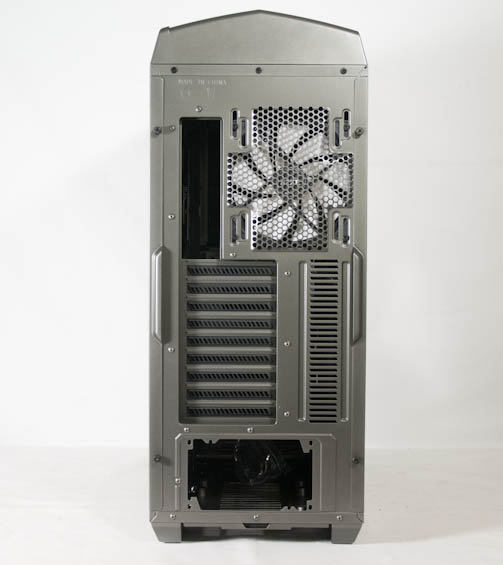 When we get to the back, we can see the usual adjustable rear exhaust fan along with a healthy amount of ventilation above the expansion slots. What we don't see are portholes for external liquid cooling, which is an interesting exclusion on NZXT's part. Those holes come bog standard on almost every case produced these days but I've never actually seen them be relevant. Most modern liquid cooling systems, even on super high end builds, tend to be housed within the case itself. 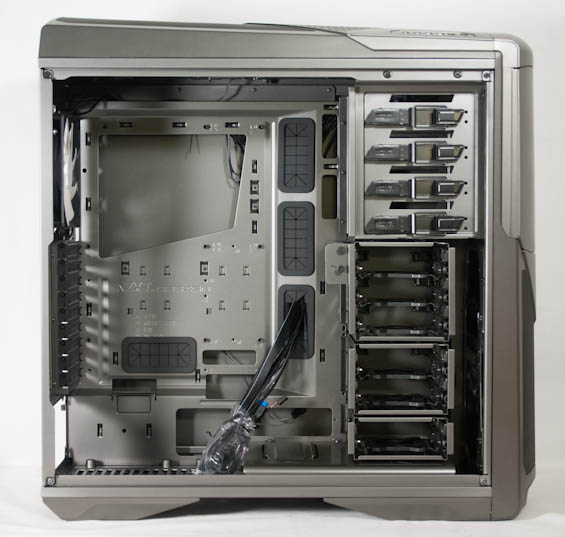 Four thumbscrews hold the hinged side panels into place, and despite hewing to the same basic ATX case design principles, NZXT's design inside the Phantom 630 is incredibly modern and enthusiast friendly. The motherboard tray is recessed slightly and the routing holes on the right side angled to steer assembly towards neater cabling. My personal favorite feature is the trio of drive cages. Because of the way NZXT split up the drive trays between cages, you essentially only need to include as many cages as you need, allowing you to remove the excess ones and improve airflow from the front 200mm intake. The cages themselves are locked into place with thumbscrews behind the motherboard tray. 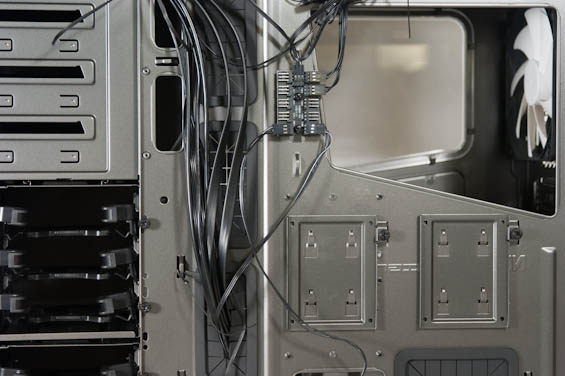 Move behind the drive tray and you find more genuinely useful features. The fan controller supports up to ten three-pin fans and prevents fan cabling from becoming too cluttered (there's also an extension cable for connecting the side intake without too much trouble). NZXT also included two trays for 2.5" drives behind the motherboard tray. These wind up sitting behind the motherboard's expansion slots and will receive minimal airflow, but for SSDs they're perfectly adequate and better still, allow you to use fewer drive trays/cages.

It's probably obvious at this point that I'm relatively enamored with the NZXT Phantom 630's design, but a lot of that stems from how useful a lot of their inclusions are. The biggest problem with ATX case design is getting cool air to hit the CPU. The bottom-front-to-top-rear airflow design is dire; SilverStone's best designs skirt it entirely by just placing a fan almost directly in front of the hottest components. By tweaking the drive cages the way they did, they're removing as many obstructions as possible from the massive 200mm intake fan, allowing a tremendous amount of cool air into the case. You'll see this pay dividends later on.