AMD is still not a chipset manufacturer

In spite of the recent release of the AMD 760 chipset, AMD continues to maintain that they are not a chipset manufacturer and they will only produce chipsets when they need to drive technology for their processors.

This makes quite a bit of sense for AMD, unfortunately it also means that the success of their CPUs is greatly dependent on third party chipset manufacturers, which isn’t a situation that any CPU manufacturer wants to place themselves in.  If you remember, the fact that Intel placed their entire CPU line in the hands of a single memory manufacturer ended up hurting them quite a bit.  While AMD has done this for quite some time, the company may be getting to the point where their execution may be hindered by these third party chipset manufacturers.

The perfect example is the poor adoption of the Duron.  Without an equivalent of the i810 chipset the Duron was kept out of many retail systems where it would’ve enjoyed incredible success since it not only outpaced the Celeron in performance but in clock speed as well.  When Intel launched the Celeron 766 processor we asked them why they hadn’t moved to the 100MHz FSB earlier, and their reasoning was simple.  Even though the Celeron is slower, both in clock speed and in overall performance, they weren’t really losing much sales to the Duron because of the very fact that the Duron still has no reliable integrated chipset to run on.  It’s unfortunate, but it’s the truth for most of the market (remember, tweakers and overclockers only make up a small portion of the overall market but we’re growing in numbers, beware). 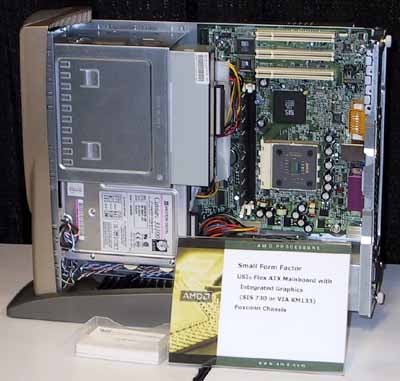 AMD will remain very quiet in terms of chipset releases in 2001 and on into 2002.  The only chipset they will be releasing is the multiprocessor version of the 760, not unusually named the AMD 760MP chipset. 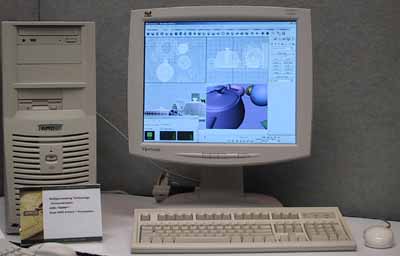 The 760MP, which was on display in AMD’s suite at Comdex, will pretty much be a dual processor version of the 760.  The 760MP is physically a different chip than the 760 since AMD’s point-to-point EV6 bus protocol states that each processor shall have its own data path to the North Bridge.  While this means that, in the case of a 266MHz FSB, each CPU in a dual processor AMD system will have a full 2.1GB/s of bandwidth to/from the North Bridge, it also means that motherboards will have to include twice as many traces to the North Bridge making the motherboards very expensive.

We’ve known for over a year now that Tyan has been a testing site for the 760MP chipset, and word finally got out that they made the 760MP board that AMD was showing off at Comdex.  You can expect a 760MP board from them sometime early next year which should work with all current Socket-A CPUs.  A dual Morgan system should be a killer entry level workstation, not to mention what two Palominos could do for a server.

The rest of AMD’s chipset roadmap, as you can see from the chart below, is entirely dominated by VIA, SiS and ALi.

We have ALi’s DDR solution on the way, and we already have SiS’ solution which we have been playing with for a little while now.  The most interesting thing on the roadmap is the fact that DDR SDRAM will become a value option towards the second half of 2001.  That will do wonders for the low end market as you can guess, but once again AMD’s entire chipset lineup is dependent on the proper execution by VIA, ALi and SiS.  The latter two haven’t had the best track records and VIA has historically had some memory performance issues with their controllers, so it will be interesting to see how things turn out next year for AMD.